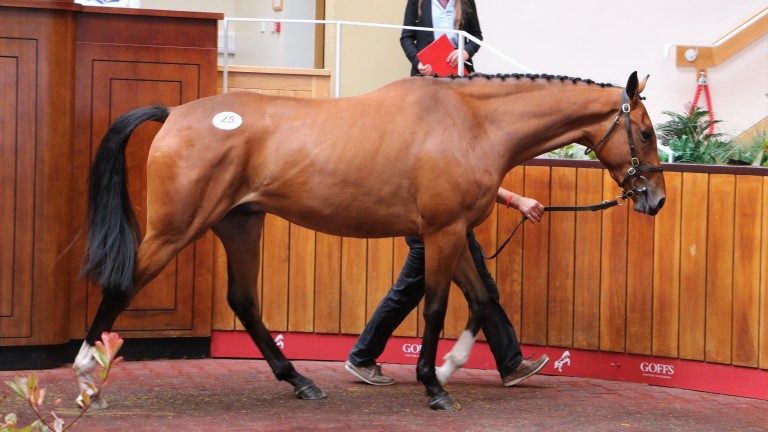 With 192 lots on offer, Tuesday's session of the Goffs UK Summer Sale provided the first proper barometer as to the state of the National Hunt market in a post-coronavirus world, and with 145 of those selling for a clearance rate of 76 per cent, there were, in the circumstances, reasons to be positive.

Those transactions brought turnover of £3,535,000 - down by 25 per cent year-on-year, albeit with a smaller offering meaning that 34 (19 per cent) fewer lots changed hands. The average was down by eight per cent to £24,380 while the median dipped by five per cent to £20,000. Top lot honours were shared between two stores who fetched £80,000 apiece.

At the conclusion of trade, Goffs UK managing director Tim Kent said: "Selling National Hunt stores at the end of July was not something that we would have predicted when we were inspecting the horses for today's sale, and the widely publicised events that have led to this week's sale schedule have been a challenge for all attendees, but the wait has been worthwhile and we are delighted with today's trade.

"Monday's session was the perfect way to start the store sales season and set the tone for today, which has returned as vibrant a trade as we could have hoped for at the start of the week."

Willy Twiston-Davies was among the busiest buyers in Doncaster on Tuesday as he signed for five lots under the Twiston-Davies Equine banner for a total outlay of £245,000. Among the quintet was one of the joint top lots, the French-bred Boy Adely, a son of Diamond Boy consigned by Lakefield Farm.

"He's a gorgeous horse, a great physical who moved ever so well," said Twiston-Davies. "I looked at 40 or 50 horses yesterday and when I saw him he was a real eyecatcher. Myself and Ian Ferguson, who helps me and Dad [Nigel], agreed that he was the best physical of today's lots."

The buyer added: "The right people were underbidders in Alan King and Highflyer Bloodstock and also Evan Williams, they're shrewd judges. We're delighted to get him and he'll come back to mine to be broken in and then the owner plans to send him down to Dad after that."

The three-year-old is out of the winning Bering mare Adelyta, meaning he shares his damsire with record-breaking stayer Stradivarius. The gelding was bred while Diamond Boy stood at Haras de la Croix Sonnet, though the increasingly popular son of Mansonnien has called Kilbarry Lodge Stud home for the last three breeding seasons.

Explaining how he came to consign the £80,000 store, Lakefield's John Bleahen said: "He came from France. He's been an exceptional mover from the word go and has a great presence and a great mind. He's gone to a terrific trainer who's bought a few good horses from me before. The underbidder, Evan Williams, bought Grade 1 winner Esprit Du Large from us too, so it was great to have those people involved." 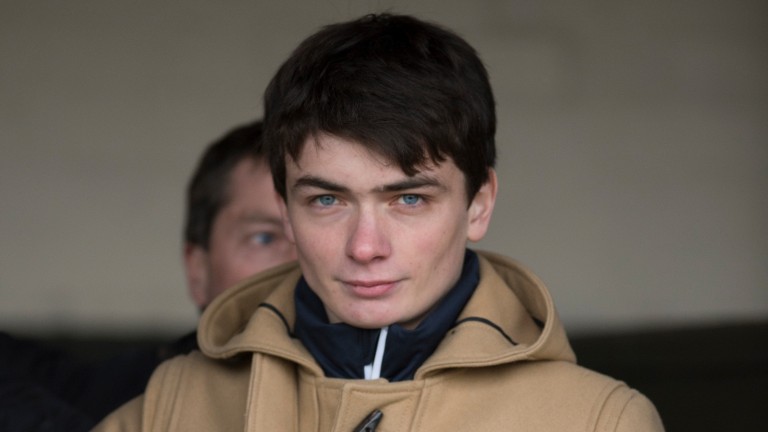 Willy Twiston-Davies: "Ian Ferguson has got the right ideas about horses and we can bounce off each other"
Edward Whitaker
Also among Twiston-Davies' haul was a £54,000 son of Robin Des Champs consigned by Trickledown Stud. The three-year-old is the second foal out of the Definite Article mare Manhattan Babe that Twiston-Davies has signed for, having also given €50,000 for his year-younger brother at last year's Land Rover Sale.

He said: "I've got the full-brother at my yard, Carl Hinchy owns him and we think a lot of him so his brother was always going to be hard to ignore. He's a lovely physical, very athletic."

Expanding on his sales ring talent search with Ian Ferguson, Twiston-Davies said: "Ian Ferguson is a long-standing friend of Dad's and two opinions is always better than one. He's got the right ideas about horses and we can bounce off each other and then use Dad for the final seal of approval.

"We've had a bit of luck here before and we've got a lot of owners here who've come to look at the horses, and if they've moved well, looked nice and the pedigree stacks up we've tried to get them bought."

Boasting an impressive physique, the Soldier Of Fortune gelding from Ballincurrig House Stud was among the session's talking horses and went straight to the top of the market when knocked down to Shaun Brookhouse, son of multiple Grade 1-winning owner Roger Brookhouse, at £80,000.

Brookhouse has kept to familiar territory with this three-year-old, as Mersey Novices' Hurdle hero Black Op, who carries the owner's familiar pale blue and pink silks, appears beneath the second dam. 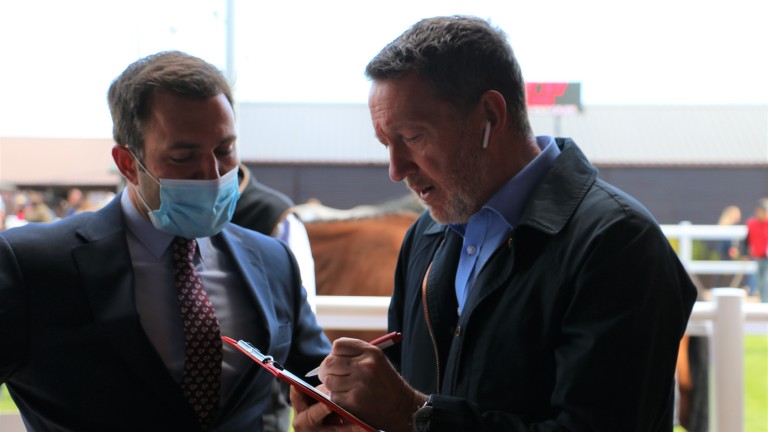 Shaun Brookhouse signs for the £80,000 Soldier Of Fortune gelding
Claudia Claydon
Black Op's trainer Tom George was on hand after the docket had been signed, but explained no decision had been reached as to who will ultimately train the son of Soldier Of Fortune.

George said: "Obviously we know the pedigree well through Black Op and he's a really lovely individual. He'll be broken in now and then go back to Roger's and he'll work out what he wants to do with the horse from there."

The gelding is out of the unraced Afaraka, a daughter of Flemensfirth whose siblings include the Grade 2-winning Younevercall, the Grade 3-placed Afasheen and Afar Story, dam of Black Op.

He was making his second appearance at auction, having cost €72,000 when signed for by Timmy O'Byrne at the Tattersalls Ireland November National Hunt Sale. 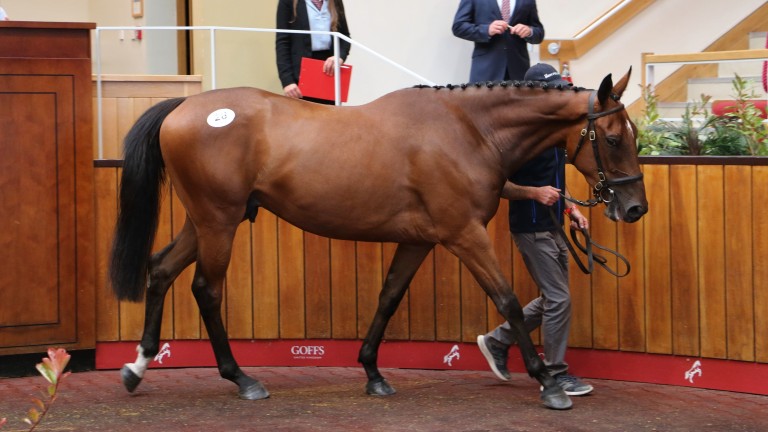 Lot 26: the son of Soldier Of Fortune knocked down to Shaun Brookhouse
Claudia Claydon
George got among the buyers himself later in the session when going to £52,000 for the Westerner gelding out of Parsons Hall offered by Sluggara Farm.

Giving a trainer's perspective on trade, George said: "There's some value around but the good ones are still making plenty of money. You have to keep buying though as you can't have a blank year with nothing coming through. It's going to be tough but you've got to keep going, there isn't much else you can do."

There was an end of an era on Tuesday as the final store by Midnight Legend to be offered in Doncaster came under the hammer, and was duly knocked down to Matt Coleman, bidding from the socially distanced parade ring, for £70,000.

"They don't make Midnight Legends anymore," said Coleman, who revealed the filly had been bought on behalf of owner Philippa Cooper and will now head to Ballincurrig House Stud. "She's just going to go out in the field for a bit and be given a bit of time. She'll head into training next year, although I'm not sure who with yet.

"I think she'll benefit from that as she's quite a light-framed filly, although she's extremely athletic. She's got a wonderful temperament too; she looks a really tough, strong-willed filly." 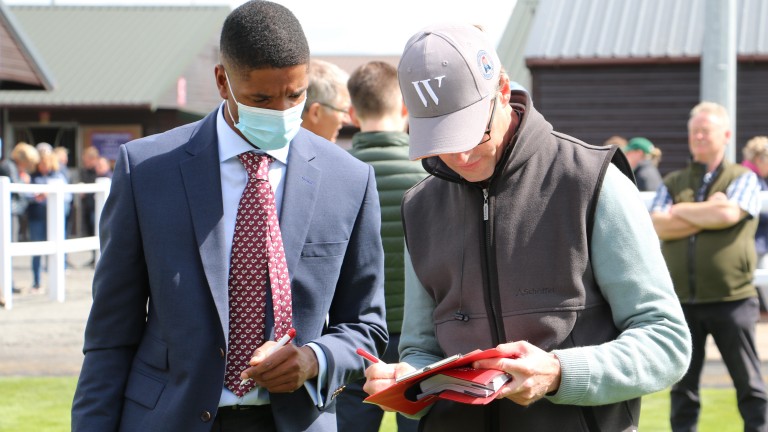 Matt Coleman signs the docket for the £70,000 Midnight Legend filly
Claudia Claydon
The filly is out of the Listed-winning hurdler Annie's Answer, with the daughter of Flemensfirth having also produced three winners, headed by the useful Prince Kayf.

"I did quite a lot of research on her beforehand," continued Coleman. "Because of the coronavirus situation she's actually been broken in by Tony Ross, who I know well, and he was very positive on her.

"The mother was very good and is producing racehorses; her daughter Schiaparannie was a nice filly who won over hurdles and ran well in the Aintree bumper and Prince Kayf looked good in novice hurdles last year."

The filly was bred by Reg and Jane Makin and consigned by Kathryn and Ian Hutchinson's Battlefield Stud.

"It's a good result and she's exceeded my expectations," said Ian Hutchinson. "As always, there's money there for the right article and today we had the right article. She's one of the last Midnight Legends so she's a collector's item. The mare lives with the owners so we've just prepped the filly."

The Goffs UK Summer Sale concludes on Wednesday, with a session comprising August Store Sale lots and Spring Horses-in-Training and Point-to-Point lots starting at 10am.

FIRST PUBLISHED 7:32PM, JUL 28 2020
This week's sale schedule have been a challenge for all attendees, but the wait has been worthwhile and we are delighted with today's trade