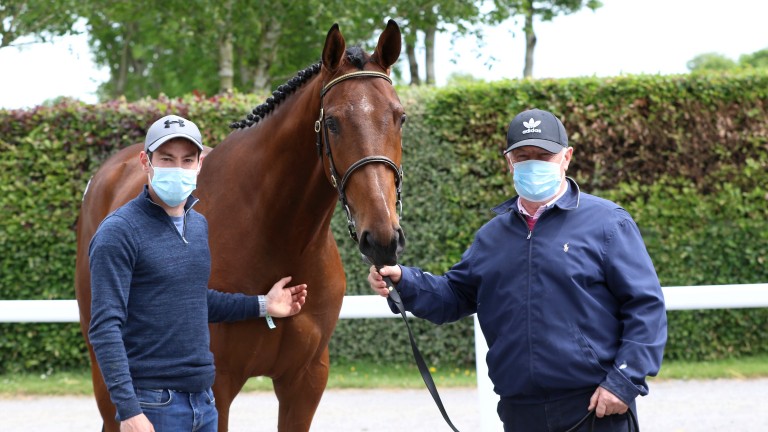 JJ (left) and Dick Frisby of Glenwood Stud with the Walk In The Park gelding out of Tempest Belle
Peter Mooney
1 of 1
UPDATED 11:22PM, JUN 9 2021

Demand remained strong and prices high at the Goffs Land Rover Sale on Wednesday, more than justifying the company’s decision to expand Part One to two days.

Andrew and Gemma Brown were to the fore once more on day two, with Joey Logan signing for two of the session’s choice lots, bringing the couple’s spending to €570,000 for three horses at this year’s Land Rover Sale.

The day’s most expensive lot went through the ring just over an hour into proceedings and boasted the sought after Walk In The Park as his sire and a Grade 1 winning half-brother in Monalee.

Consigned by Dick Frisby’s Glenwood Stud, the youngster, an attractive bay with a lovely loose action, sparked a prolonged battle between Logan and Tom Malone, with the former party bringing the hammer down at €220,000.

“We saw him on the farm and were mad about him,” said Logan. “He's a very well-related horse and one of the best Walk in The Parks that I've seen. We had two or three on our list including the Martaline gelding yesterday so we’re delighted to be able to get them.” 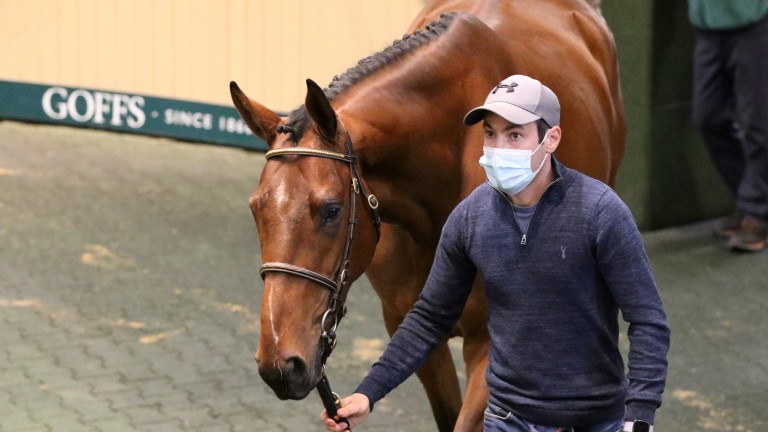 Lot 249: the Walk In The Park gelding out of Tempest Belle sells to Joey Logan for €220,000
Peter Mooney

The sale represented a handsome profit for Frisby, who bought the gelding for €68,000 at the 2018 Goffs December Sale from the draft of Ballincurrig House Stud.

Walk In The Park’s first Irish-bred crop achieved some notable results in the bumpers which replaced some of the point-to-point fixtures this spring and that, allied to the quality of stock on offer by Coolmore’s Derby runner-up, ensured that his offspring were hot property over the last two days.

The Browns’ red and white silks are becoming more familiar on Irish racecourses and they added to their growing string, which is trained at Gordon Elliott's Cullentra House Stables, when purchasing a standout filly from the first of just two National Hunt-bred crops by Champs Elysees for €150,000.

The Peter Nolan Bloodstock-consigned filly has the looks to go with one of the best pedigrees likely to be seen in any store catalogue this summer. She is a half-sister to Landofhopeandglory, who was second in the Group 2 Curragh Cup for Aidan O’Brien and a Grade 3 winner over hurdles and fences for Joseph O’Brien.

Dam Wurfklinge won in her native Germany at two and is an Acatenango sister to Wurftaube, a champion in Germany and the dam of Group 1 Deutsches Derby winner Waldpark. Wurftaube is also the second dam of St Leger winner and promising young sire Masked Marvel and third dam of Waldgeist, whose Group 1 victories included the Prix de l’Arc de Triomphe. 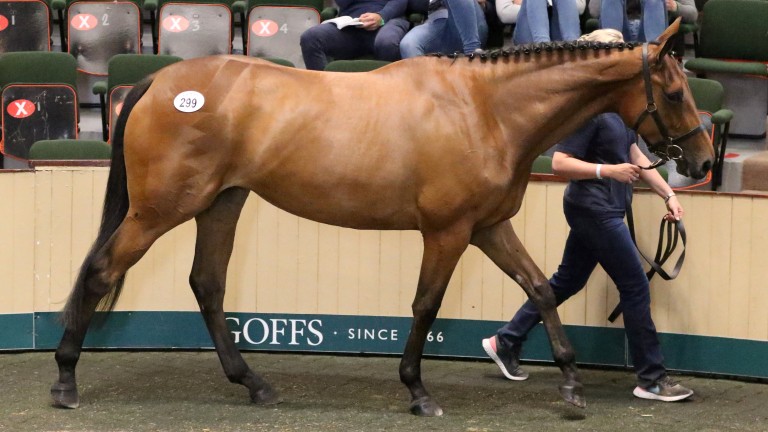 This filly by Champs Elysees out of Wurfklinge was purchased by Joey Logan for €150,000
Peter Mooney

Such a pedigree gives the six-figure filly enormous residual value and Logan confirmed that the Browns are looking to the future with their latest acquisition.

Logan said: “The plan is to put her into training with Gordon and hopefully get some black type with her. They would like to have some nice broodmares and hopefully she will be a good one for them. She's the queen of the sale and has an amazing pedigree."

Nolan spotted her potential as a yearling in a Flat sale and she cost him 26,000gns from breeder Churchtown House Stud.

Her sire’s untimely demise could prove to be an enormous loss if his sale prices recorded at Kildare Paddocks over the past two days are anything to go by. From 17 horses offered by the Grade 1 winner, 15 changed hands for an average of €48,533. Champs Elysees’ advertised fee for his first season under the Coolmore National Hunt banner was €6,500.

The 2021 Land Rover Sale was an enormous success for Nolan as his draft contained the top-priced gelding and filly and he ended the sale as top consignor with 24 horses sold for €1,390,000.

Change of fortune for Malone

Malone was thwarted in his quest to buy the session-topper but had better luck when landing Brown Island Stables' Network three-parts brother to the Group 2 Prix Murat winner Crystal Beach, who is out of a Martaline half-sister to the four-time Grade 1 winner Questarabad.

“He’s a lovely animal and a special horse with a very nice pedigree. He is for Paul Nicholls,” confirmed the agent, who went to €135,000 to secure the French-bred three-year-old.

He was one of six horses Malone bought on behalf of Nicholls during Part One, a haul that also included Kilmoney Cottage Stud’s Milan gelding out of the unraced Presenting mare Beautiful War. The youngster, the first foal out of the half-sister to the useful Glamorgan Duke, cost €165,000. 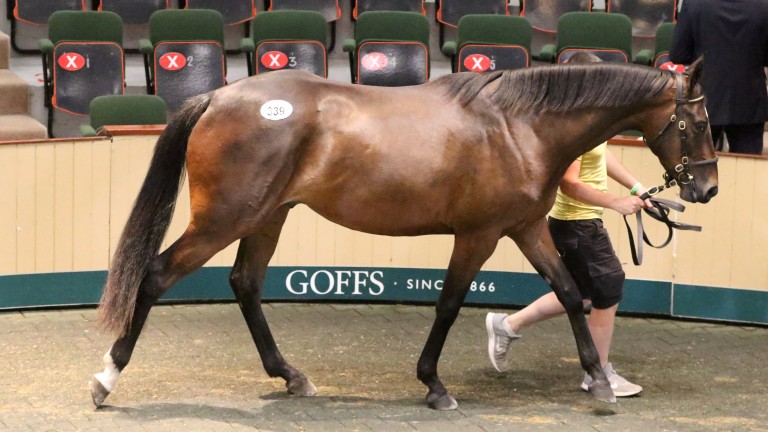 The Milan gelding out of Beautiful War who was purchased for €165,000 by Tom Malone
Peter Mooney

“I’ve had serious luck with Milan in the past and bought a Grand National winner by him [One For Arthur]," said Malone. "I loved this horse, he’s from a great nursery and is for Paul Nicholls.”

Malone also signed for a Kayf Tara gelding with an outstanding female family. The €100,000 youngster is a half-brother to the Grade 3-placed Emily Moon, who is a three-parts sister to China Sky, the dam of three-time Grade 1 winner Champ.

Emily Moon is out of Wood Lily, a daughter of Sidalcea who in turn is an Oscar half-sister to the triple Gold Cup hero Best Mate and the Grade 1 Challow Novices’ Hurdle winner Cornish Rebel.

Consigned by Kilbeg Stables on behalf of Jim Ryan, who bought him as a foal for €50,000, the youngster will be joining the Ditcheat squad of Nicholls, the trainer of Cornish Rebel.

Shefflin and Holden stock up

The alliance of Michael Shefflin and Paul Holden was amongst the busiest buyers in the upper echelons of the market during Part One of the sale.

The duo added two purchases on Wednesday to the four already bought on Tuesday, going to €140,000 for the Walk In The Park gelding out of a sister to the Champion Hurdle winner Rock On Ruby.

Consigned by Norman Williamson’s Oak Tree Farm, the gelding is the fourth produce of Alpine Glade, who won three times over hurdles and was Grade 2-placed for her owner-breeder John O’Dwyer.

Interestingly both Alpine Glade and Leah Claire, dam of the Authorized gelding the pair purchased on Tuesday for €145,000, were both trained by Group 1-winning Flat trainer Willie McCreery and their time in Rathbride Stables overlapped by several seasons.

Creating the 'British bubble' was a key element in the success of the sale, with Tom Malone, Aiden Murphy and the Highflyer Bloodstock team in particular very active over the course of the two-day auction. The Highflyer agents were especially busy, buying a total of 43 horses for their various clients, ten more than they did back in 2019.

Goffs group chief executive Henry Beeby remarked: "We have been pleased to welcome a small but significant group of UK buyers to Kildare Paddocks using the ‘bubble’ method successfully utilised at our breeding stock sales last autumn, and replicating the measures for British connections travelling to Punchestown and the Irish Guineas meetings.

"At this point we would like to thank Brian Kavanagh and his colleagues at HRI who have been pivotal in this connection, as I’m not sure it would have been possible without them.”

All three of the offspring of Al Namix catalogued were bought by members of the Highflyer team, including the sire's sole representative on Wednesday. Offered by Hugh Bleahen’s Clifton Farm, the grey is the second foal of Comme D’Habitude, a half-sister to the Listed-placed chaser Rochelaurel. The gelding was one of two sons of Al Namix to realise €100,000 at the Land Rover Sale.

Now that the milestone of the first live sale of 2021 has been achieved, there is much to be optimistic about looking towards the rest of the year.

Beeby added: "So we look forward to the rest of 2021 with hope and positivity. The atmosphere at Kildare Paddocks has been wonderful as buyers and sellers were simply happy to be back at a live sale. Who could imagine how jolly everyone could be despite having not a bar in sight as we focussed on the business, although I’m told the ice cream van did a roaring trade; but the serious point is that Goffs can and will deliver the best prices for the best horses when we have them, regardless of the category.

"We would submit it was ever thus, but it almost felt like we needed this sale to prove the point again and, with the help of our vendors and the enthusiasm of the purchasers, Goffs has delivered."

The Goffs Land Rover Sale continues on Thursday, with Part Two beginning at 10am.

A licence to print money or a monumental risk? Analysis into the breeze-up sale season final figures

FIRST PUBLISHED 9:21PM, JUN 9 2021
I’ve had serious luck with Milan in the past and bought a Grand National winner by him