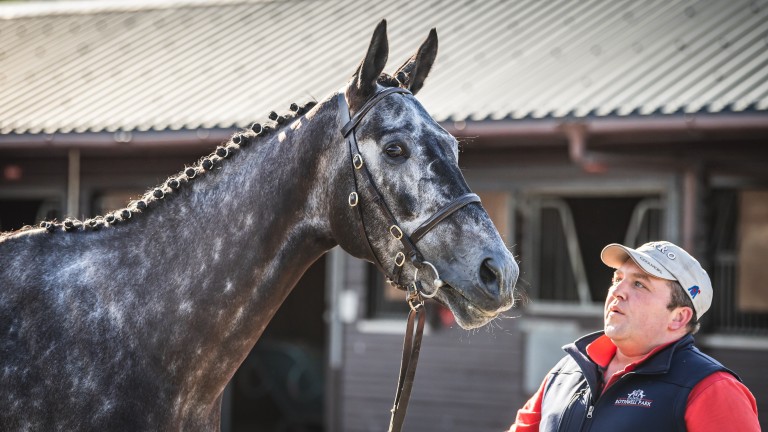 Denis Murphy's Happy D'Ex lit up the opening day of the Goffs UK Horses in Training and Point-to-Point Sale when selling to Mouse O'Ryan and Gordon Elliott for £195,000.

The daughter of Saddler Maker was described as "a queen" post-sale and did not let connections down when striding around the ring, doing enough to secure the attentions of a serious buying team.

A 15-length winner of her sole start in a four-year-old mares' maiden at Dromahane, Happy D'Ex (469) is out of a multiple winner in the Fragrant Mix mare Soiree D'Ex, a half-sister to the Listed-placed chaser Azrou D'Ex.

Murphy said: "She's a lovely, attractive filly and a filly that's going to go far after a summer's grass. She could be anything and was very impressive with the way she won, you'll hear a lot about her."

O'Ryan, who revealed she had been bought for KTDA Racing, the owners of Kim Muir winner Mount Ida, added: "Her looks speak for themselves, she's gorgeous, and her sire speaks for himself having produced the likes of Apple's Jade. She's a queen.

"She came recommended by Denis and we saw her in February before she ran and loved her. She's gorgeous and we're delighted to have her."

It was a case of faith being rewarded for Phil Rowley as his exciting The Player Queen made £140,000 to Gerry Hogan and Rose Dobbin.

A three-length winner of a Maisemore Park four- and five-year-old maiden last autumn for Rowley's wife Mel, the daughter of Yeats (442) took her form to another level when readily winning a mares' bumper at Cheltenham's April meeting.

New sale topper at the Spring HIT/P2P Sale with @RowleyPhil The Player Queen, a Cheltenham bumper winner, selling to @GerryHoganBS for £140,000 pic.twitter.com/bND9IXKQ5z

Rowley said: "I'm sad to see her go but she's gone to a very good home and hopefully she'll do very well. I bought her as a three-year-old from here as a store and she won her point before going to Cheltenham.

"We did try to sell her once at Yorton but nobody believed me when I said she was a good mare, so we went home. The rest is history!"

A delighted Dobbin, who confirmed the five-year-old had been bought for her father Duncan Davidson, said: "I loved the way she won her bumper as she came up that hill very well and she looks like a good 'un. We'll be going hurdling with her."

Bred by John Dwan and John Brennan, the five-year-old is out of a full-sister to the Galtres Stakes-placed Segovia and is a half-sibling to four winners.

Hogan and Dobbin also struck the winning bid when going to £90,000 for Sean Doyle's Rae Des Champs (453), a daughter of Robin Des Champs who romped home on her sole point start at Lisronagh this month.

Snowden and Malone on the money

The first six-figure lot of the sale came in the form of Git Maker (428), a son of the late Saddler Maker who came with a progressive profile from three placed efforts followed by a rampant ten-length success in a geldings' maiden at Necarne last Friday.

Consigned by Warren Ewing's Bernice Stables, the athletic five-year-old was hammered down to Tom Malone for £105,000. The agent said Git Maker would join the yard of Jamie Snowden. 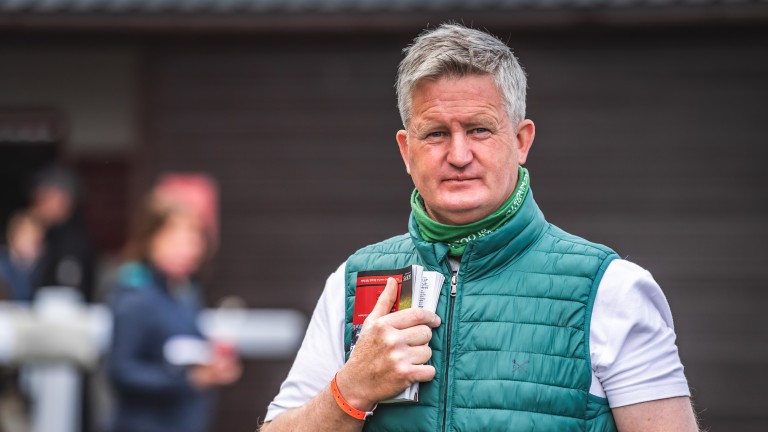 "He's a lovely animal and had three lovely runs in the autumn and they gave him a break before he came back and romped in," said Malone.

"He's shown a great attitude, likes soft ground, jumps and stays well. He's what any owner would love and will go into training with Jamie Snowden."

Out of the unraced Coastal Path mare Bamos, he hails from the family of the high-class Steeplechase delle Capannelle winner and Grand Steeplechase d'Europa third Taxe Comprise.

Malone and Snowden later went to £115,000 to secure Donnchadh Doyle's Super Survivor (484), a son of Shantou who had finished an encouraging second on his debut at Dromahane. The five-year-old's family includes three-time Cheltenham Gold Cup hero Best Mate.

Plenty of cheer for Seven Barrows

The Seven Barrows draft of Nicky Henderson caught the eye of many a buyer early in the afternoon and the dual winning hurdler Bothwell Bridge (408) went the way of Highflyer Bloodstock's David Minton for £75,000.

An easy winner on his hurdles bow at Warwick, the gelding was third behind the subsequent Challow Hurdle winner Bravemansgame at Newbury before striking again at Hereford. He is a half-brother to Royalraise, a four-time winner for Oliver Sherwood.

Having sported the famous colours of Patricia Pugh, the eight-year-old will now represent the Tim Talbot-run Ratkatcha Racing syndicate, who have readily stocked up for the Ollie Greenall team. 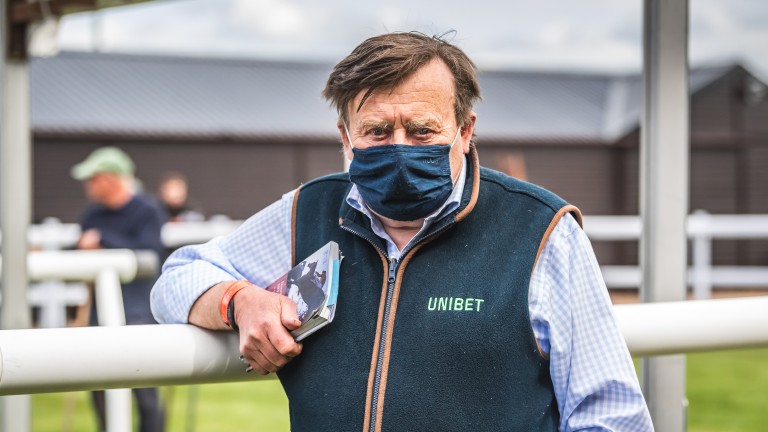 Astbury said: "I've bought him for Tim Talbot and Ratkatcha Racing, they're a new owner of ours at Ollie Greenall's and have got ten with us now. We bought quite a few pointers and young horses so it's great to have him on board.

"He's ready to go to the big meetings, the others will probably take a season or two before they get to the nicer races, so hopefully we can go and have a good bit of fun with him."

He added: "I've worked for Ollie for quite a few years, I've been buying the horses for them over the last couple of years. We'll hopefully be up to 50 or 60, although it could be slightly more as we bought a lot of horses privately through the summer and a few English pointers."

Henderson himself waded in when striking the winning bid for Constitution Hill (446) at £120,000. The Bernice Stables-consigned Blue Bresil gelding was second on his debut in a Tipperary point and is out of the Listed-placed King's Theatre mare Queen Of The Stage.

David Pipe enjoyed a fine 2020-21 campaign with Finale Juvenile Hurdle winner and Triumph Hurdle runner-up Adagio leading the way, and the trainer made his presence felt when winning the bidding battle for Kingofthewest (423) at £66,000.

Delighted to have bought this handsome chap @GoffsUK today and he is looking for a owner!! Second in his only start in an Irish point to point he has the form and pedigree to ensure a bright future. Please get in touch if you have any interest in owning him!! pic.twitter.com/KkFi5Bdy5W

Consigned by Donnchadh Doyle's Monbeg Stables, the five-year-old son of Westerner was second in a geldings' maiden and is out of a Kingsalsa half-sister to the Alan King-trained Grand Annual scorer Oh Crick and Othermix, runner-up in the Grade 2 Pendil Novices' Chase for Tom George.

The annual Million In Mind Partnership dispersal again proved highly popular with the Paul Nicholls-trained Rockadenn (400) topping the draft when selling to Alistair Ralph for £45,000.

The son of High Rock won the Listed Prix Christian de L'Hermite Grand Chase for Julien Merienne in January last year and struck in a handicap hurdle at Taunton on his second start for the champion trainer.

The vibrant trade delivered a new record day-one average and median, up 22 per cent on the previous record set in 2018, while half a dozen lots made six-figures.

The sale continues tomorrow from 10am.

Bailey and Murphy off the canvas with £105,000 signing at vibrant Goffs UK

FIRST PUBLISHED 8:01PM, MAY 19 2021
She could be anything and was very impressive with the way she won, you'll hear a lot about her