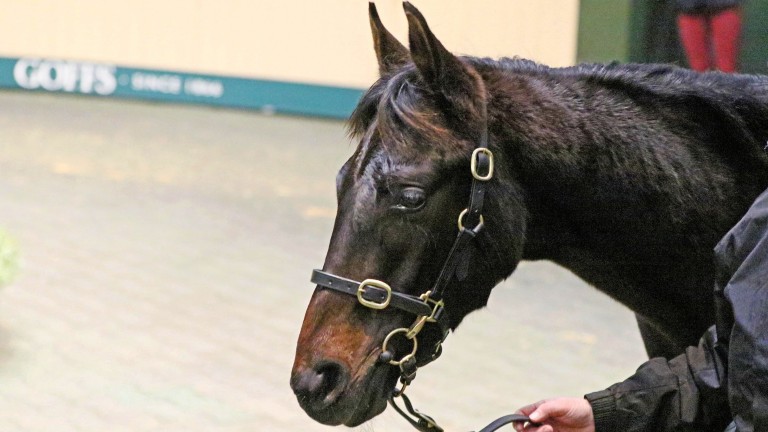 In weather that could be described as being of biblical proportions, the final sale of the year at Kildare Paddocks got under way in the full grip of Storm Barra on Tuesday.

Early in the day it appeared that buyers had used the red weather warnings issued for areas of the Irish coast as an excuse to remain cosily tucked up at home rather than buying National Hunt foals but, like the calm which enveloped the land before Barra made its presence felt, they soon sprung into vigorous action.

The magic formula of proven pedigree, handsome good looks and a little bit of Gallic flare made Rathmore Stud's Saint Des Saints colt irresistible to buyers. Peter Molony's Limerick nursery consigned the only offspring of Haras d'Etreham's brilliant sire in the sale on behalf of Yeo Barton Bloodstock and a storm of bids rained down on the rostrum.

Pat Connell was the man to emerge victorious with this most prized of foals at €90,000 and, in a departure from the usual path most of the colt's contemporaries will tread, Connell's client intends to race the full-brother to Irish Grand National winner Burrows Saint.

He revealed: "I have bought him for a client and the plan is that he will be kept to race. He will stay here and be reared until he is a three-year-old and we will see what plans are made after that.

"Obviously he is by a top sire and he is an own-brother to a very good horse, so it all added up. As well as that, he was the standout physical in the sale and I thought he was gorgeous. Horses like him don't come up for sale too often." 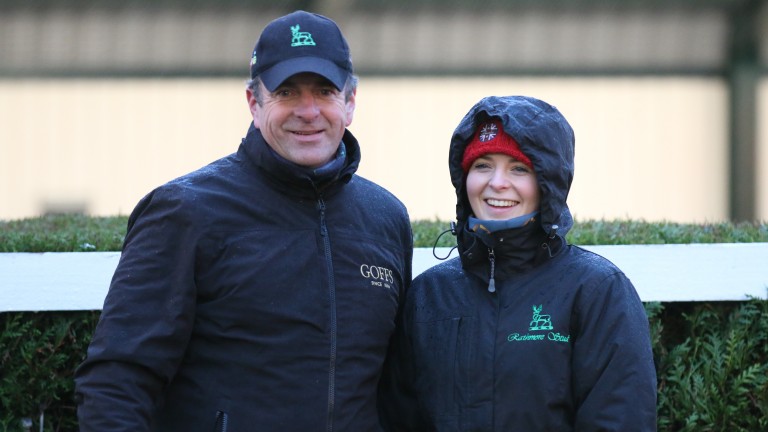 The March-born foal is also a half-brother to Jersey Lady, by Martaline, who was third in the Listed Karndean Mares' National Hunt Flat race for Oliver Sherwood at Cheltenham last year. Their dam La Bombonera won the Listed Prix Finot and is a Mansonnien full-sister to Lagunak, winner of the Grade 1 Prix la Haye Jousselin.

The price equalled the sale record for a foal, which had been set three years ago, and the colt is the most expensive foal by his sire to sell at auction in Ireland.

Crystal Ocean's first foals have created a buzz since they started to arrive on farms around the country early this year, and that buzz has only increased with their appearances in sale rings. That continued at Goffs on Tuesday, where a son of the Prince of Wales's Stakes winner illuminated the bleak midwinter evening when selling for €80,000 to Gerry Aherne on behalf of Flash Conroy, who was still in France. 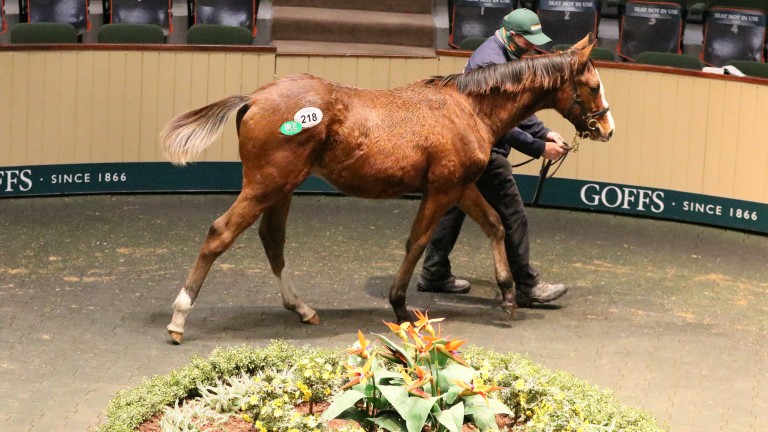 "Flash asked us to try to find him the best Crystal Ocean and we felt that this colt was a standout," said Aherne.

"The sire's first crop have been very well received and we tried hard on some of them a few weeks ago - we are delighted to get this one. He is a well-bred colt out of a mare whose first two foals sold very well, so hopefully he will be lucky."

Consigned by The Beeches Stud, where Robert McCarthy stands his sire, rated the equal of Enable and Waldgeist in 2019, the late May foal is the fourth out of Lucky Fancy, who was fourth in a bumper for Joanna Morgan.

Lucky Fancy is a Kayf Tara half-sister to the Grade 2 Aintree bumper winner Diamond Sal and Ring The Boss, who was a Listed winner over hurdles at Sandown, and to the Grade 2-placed pair of Theatre Girl and Conflictofinterest. It's also the family of the brilliant sprinter Muhaarar.

Harris indulges in some retail therapy

Chris Harris, one of the directors of Value Retail. which is behind such shopping destinations as the Bicester and Kildare Villages, is in the midst of his busiest time of the year, with consumers piling into the outlet villages to purchase their Christmas gifts.

Harris, through Stephen Kemble, turned purchaser at Goffs on Tuesday morning as he and wife Carol bought one of the early highlights of the foal session.

John Dwan's Ballyreddin Stud offered a three-parts sister to recent Grade 3 novice chase winner Gin On Lime and the Doctor Dino filly lit up the bid board at €65,000. 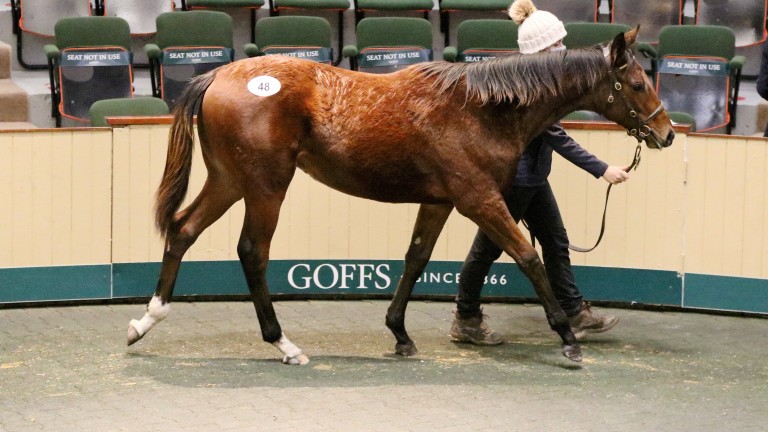 Lime On Gin, the three=parts sister to Gin On Lime, takes her turn in the spotlight
Peter Mooney

The filly, already named Lime On Gin, is out of Eminence Rouge, a Youmzain half-sister to Gin On Lime, who has only once been out of the first two over fences for Henry de Bromhead. A winner over jumps at four, the AQPS mare was bought for just €14,000 by Eric Lemaitre at Arqana's July 2019 Sale and this is her first foal.

Maxios has the X factor

Ashwood Stud sold a Maxios colt who, like Lime On Gin, is related to another to carry the Robcour silks to victory over fences. The half-brother to Grade 2 winner Impact Factor, who made a winning comeback after 576 days off in the Easyfix Equine Handicap Chase at Fairyhouse's Winter Festival, was knocked down to Adrian Costello of Park Farm for €58,000. 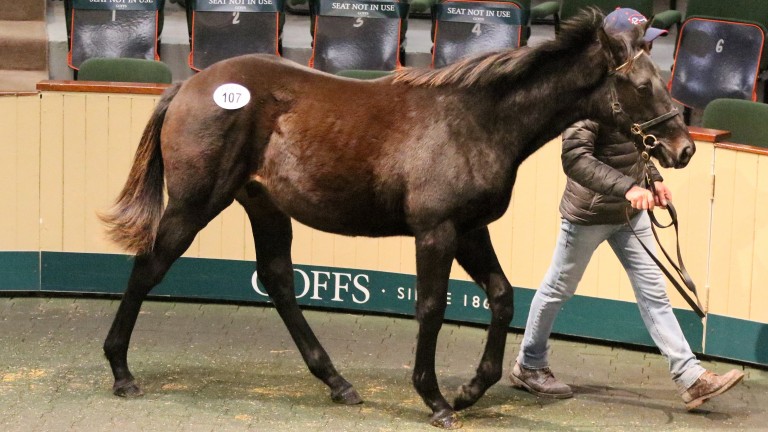 "He is just a very good foal," Costello stated. "He is a good individual and has the walk to go with it. The mare was decent and has already produced a very smart horse in Impact Factor, so it all added up, and we will look forward to bringing him back as a three-year-old."

Decent is perhaps a slightly understated way of describing the racing career of their dam Hello Kitty. The daughter of Houmayoun was a winner over hurdles and fences, and placed in a trio of Grade 3 contests for her owner and breeder William Murphy, who also bred this colt and Impact Factor.

The December National Hunt sale has grown in strength over the last few years and that was reflected in an enlarged catalogue which has seen the sale expanded to three days for the first time.

The sale continues at 10am on Wednesday.