Safalow's Mission brings down curtain for Fasig-Tipton in 2021 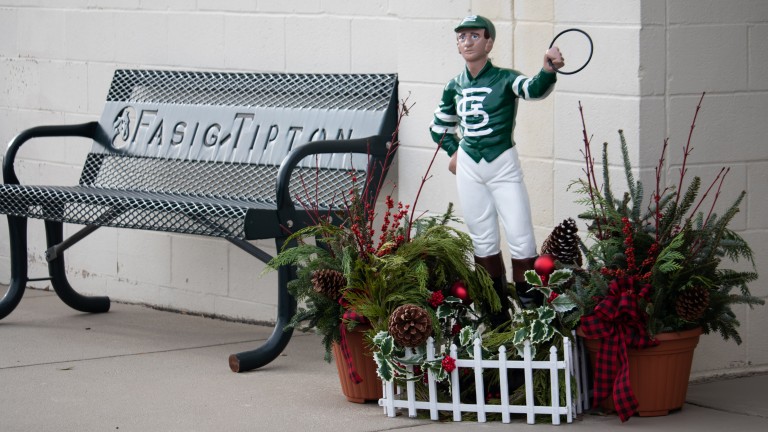 Fasig-Tipton was wrapping up trade for Christmas with Tuesday's session
Fasig-Tipton Photos
1 of 1
By Lauren Gash of BloodHorse 10:40AM, DEC 8 2021

Safalow's Mission gets to stay in a New York state of mind after being hammered down to Linda Rice, agent for Thelma & Louise Stable, at $130,000 on Tuesday at the Fasig-Tipton December Mixed and Horses of Racing Age Sale.

The two-year-old Mission Impazible gelding has made two appearances on the track to date, hitting the board both times for owner Joseph Besecker and trainer George Weaver.

He was secured for a new partnership and will continue to race with Rice as trainer in the Empire State. Consigned as part of a reduction of racing stock by Northview Stallion Station (David Wade) for Besecker, Safalow's Mission most recently worked on December 2 at Belmont Park before shipping to Maryland to sell.

The active family of dam Mosaico (by City Zip) saw an update to the catalogue when her stakes-placed daughter, My Roxy Girl , added more to her bankroll for total earnings at $632,928. Her three-year-old, Re Created (by Laoban) has made seven starts, the last being in May of this year.

"He ran well in both of his two starts. He's a New York-bred, so he will fit well in our programme, as well as being New York Stallion Stakes eligible, which is a big plus," Rice said of Safalow's Mission. "I wanted to find something for a new client that wants to race in the Big Apple.

"I thought it was a fair price. He raced well in his two starts, and frankly, with the New York Stallion Series coming up [Great White Way Division, December 18], it will be a push to make that race, but it is a $500,000 purse so we will attempt to get there. If we do, terrific, if not, we will move on to the next race." 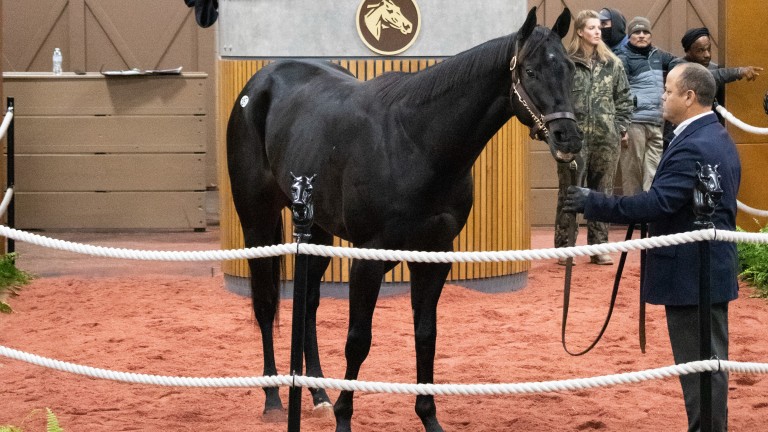 "When you can achieve increases in both average and median, it's a great day. We are very pleased," said Paget Bennett, Fasig-Tipton's sales director for the Midlantic region. "There was a good crowd from beginning to end. The trade was good and people are excited with their purchases."

Dad's Princess, consigned as hip 83 by Becky Davis, Inc, agent, was the top-priced broodmare of the sale, selling for $100,000 to Bonita Farm, agent. The nine-year-old Mineshaft mare out of Rooneys Princess, a Deputy Minister daughter of champion Princess Rooney, was offered in foal to popular first-crop weanling sire Omaha Beach on a late April cover.

Bonita Farm's general manager, Bill Boniface, made the purchase on behalf of an undisclosed client, and already has a familiar stallion in mind for her to visit in the coming year—Bonita resident Kobe's Back.

"Omaha Beach's numbers are strong as a covering sire… who knows, he's a first-crop horse, but he was well received at the sales in Kentucky," Boniface said. "I like Mineshaft mares, and of course, Princess Rooney was one hell of a racehorse. She had a lot of speed. This mare will probably go to Kobe's Back, who had a lot of speed."

On the track, Dad's Princess ran third in the My Charmer Handicap, second in the Panama City Stakes, and third in the Wasted Tears Stakes, all in 2016. Her second dam was the champion older mare in 1984 and won five Grade 1 races, including the Kentucky Oaks and Breeders' Cup Distaff. Princess Rooney later sold at the 1985 Keeneland November Breeding Stock Sale for $5.5 million to Wichita Equine from the Stone Farm consignment.

Dad's Princess has a Quality Road two-year-old filly named I Am Yours who ran fourth last out in the Golden Gate Debutante Stakes at Golden Gate Fields. She also produced a yearling American Pharoah colt named Argun.

"I liked the fact that the Quality Road two-year-old filly just ran fourth in a stakes race… It looks as though the mare might come up with some black print early on," Boniface said. "I bought her for a combination of all the reasons. She's a good-looking mare, no flaws and tracks good, and I'm happy we got her. I didn't think we would have to go that high to get her."

Boniface purchased two other broodmares, Stormy Love Affair and Access to the Moon for undisclosed clients; all three of the purchases will see Kobe's Back next year.

A weanling filly from the first crop of Vino Rosso named Ella Speed was the day's highest-priced weanling, with Brookstone Farm signing the ticket for $50,000. Consigned by Sally Thomas, agent, the filly is the first foal out of Dearest Ella (by Candy Ride).

Scenes from today's Midlantic December Mixed & Horses of Racing Age sale, with thanks to all the people who care for each and every horse like a champion!#FasigMD pic.twitter.com/Wx2MB66FOu

Northview maintained its position as leading consignor for the third consecutive season. This year Northview sold 107 of their 145 horses on offer for gross receipts of $1,773,100 at an average price of $16,571.

"The horses of racing age portion of the sale has been huge," said Bennett. "People want the instant return, ready to run, proven products and we had that today. The racehorses here today on offer are situated in the perfect location being close to so many tracks and trainers.

"Mr. Besecker got the ball rolling with his draft he brings, beginning a few years ago, and every year he has had others on offer," Bennett said. "This helps show other owners they can bring a good racing age horse to this market and get them sold. He got the ball rolling and it encourages others that you can do it, bringing it here to Maryland in December."

The Fasig-Tipton Midlantic December sale concludes the year of live auction sales in United States. The next sale for Fasig-Tipton will be the Kentucky Winter Mixed Sale, which takes place at the Newtown Paddocks in Lexington on February 7-8.

FIRST PUBLISHED 10:40AM, DEC 8 2021
It looks as though the mare might come up with some black print early on