Rosemont and Moody's love affair with Frankel continues as pair go to A$950,000 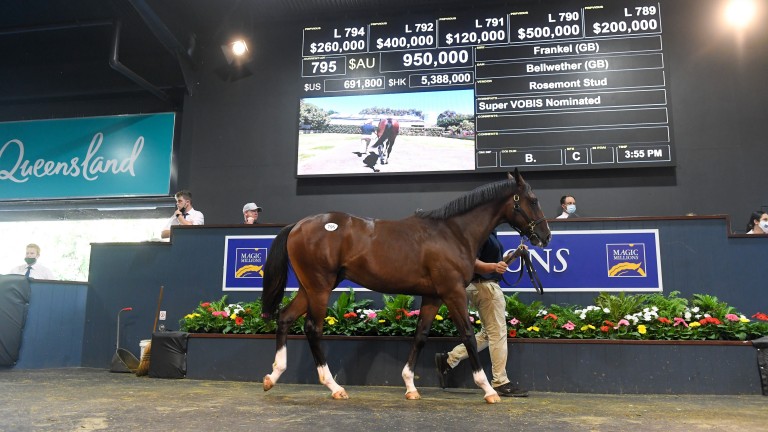 With a presence and a strut drawn straight from his incredible father - and his four white socks to boot - the youngster believed to be the only Frankel colt to be offered at public auction in Australia this year commandeered the ring on Friday and justified Rosemont’s ambitious play in breeding him.

Moving like a lion, Lot 795 inspired one of the most spirited bidding duels of the day as interest in the rare progeny of the new champion sire ran intense.

Peter Moody had witnessed the original in awe, taking a ringside seat inside the running rail to watch Frankel’s 11-length demolition of the 2012 Queen Anne Stakes field, when there to saddle a certain sprinter of his four days later. He also saw Galileo’s greatest up close that week when invited over in Newmarket by Sir Henry Cecil, who returned serve by driving around to behold Black Caviar.

Moody was out the back on Friday, leaning on another rail alongside syndicator Wylie Dalziel, while Frankel’s son, fit to burst after nine days in typical yearling confinement at the sales complex, paced his pre-auction laps.

“You always like to keep an eye on their temperament and how they handle occasions like this,” Moody told ANZ Bloodstock News.

“This counts a long way towards their education going forward - how they handle this environment, the people around them poking and prodding them, how they cope with the overall eight or ten days that they’ve been here. It gives you a great idea of what their temperament will be going forward.”

The colt, a three-quarter brother to Frankel’s Group 1 winner Mirage Dancer out of British mare Bellwether, announced his presence loudly in the ring, calling out to the throng that he had arrived.

“He was having a bit of a whinny," said Moody. "When they’re out the front, they’re on their own and they can’t see other horses, so that’s always a bit distracting for them, but he seemed to handle it pretty well."

As the bidding unfolded, it came down to Moody, standing out the back, and the Trent Busuttin-Natalie Young table, front and centre inside, with one very eager owner, a man so obviously Frankel-struck that late in the piece, with his nose in front, he’d start miming the banging of a gavel for the auctioneer’s benefit. Past A$700,000 it went, past A$800,000, then up in A$25,000 bids. It wasn’t anywhere near the highest price, but some of the passions on show still spoke volumes of the aura of Frankel, his 14 from 14, and the rare offering in Australia this year.

Eventually it was Moody and Dalziel who held sway, with A$950,000 (£500,000/€600,000) securing what the trainer later called a more “classic-looking” Frankel than the Rosemont-Dalziel colt bought last year who he now prepares, Blue Diamond Stakes-bound Rampant Lion.

“He’s a bloody nice horse. I’ve had the honour of seeing him at the farm, seeing him come through the preparation and now seeing him up here, so that’s always a bonus as well.”

Dalziel agreed the Frankel “looked like he owned the joint”.

“We’re big fans of Frankel," he said. "He was a world-class racehorse and is a world-class sire. Type-wise, this is a beautiful animal, and the number one judge in the business - Moods - loved him. He was the one he wanted to come here for.

“We bought the Frankel from Rosemont last year [for A$500,000], and we probably stole that one, because the Frankels weren’t as popular last year. We think he [Rampant Lion] could be a top class horse.”

With Dalziel to round up shareholders, Rosemont are likely to keep a slice of the horse they went to great lengths to present. 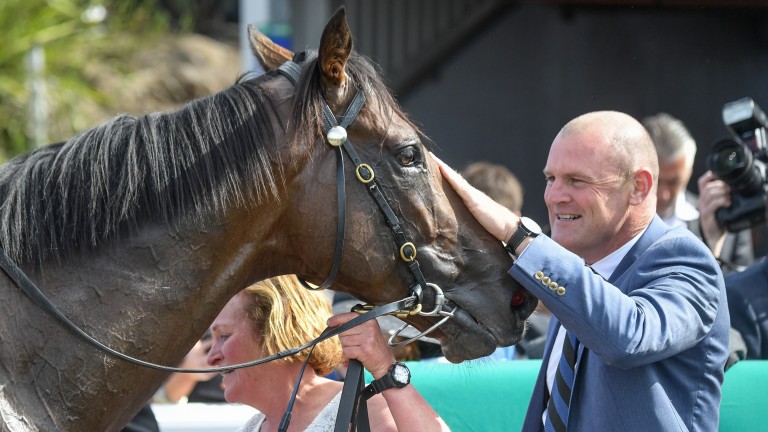 Anthony Mithen: “I’ve had a love affair with Frankel for a long time now."
Racing Photos

“I’ve had a love affair with Frankel for a long time now,” the stud’s principal Anthony Mithen said of the stallion who stands for Juddmonte in England for a cool £200,000.

“But it is a lot of work to get these Frankels into the southern hemisphere, buying a mare from the other side of the world, getting her in foal, getting her home. There’s so much that can go wrong.

“People look at the breeding and go, ‘Oh, it’s by Frankel’, but maybe don’t realise what it takes to get them here.

“So while it’s a lot of money for Moods and Wylie to give us, it’s nice to get the reward for the hard work that everyone’s put in back at the farm.

“And everyone down the farm has loved this horse as he’s carted everyone around from day dot. He’s just such a specimen. I reckon he’ll be a special horse.

“And I think Frankel will be leaving an indelible mark on the breeding scene in both hemispheres for many years to come.”

FIRST PUBLISHED 2:12PM, JAN 14 2022
I think Frankel will be leaving an indelible mark on the breeding scene in both hemispheres for many years to come