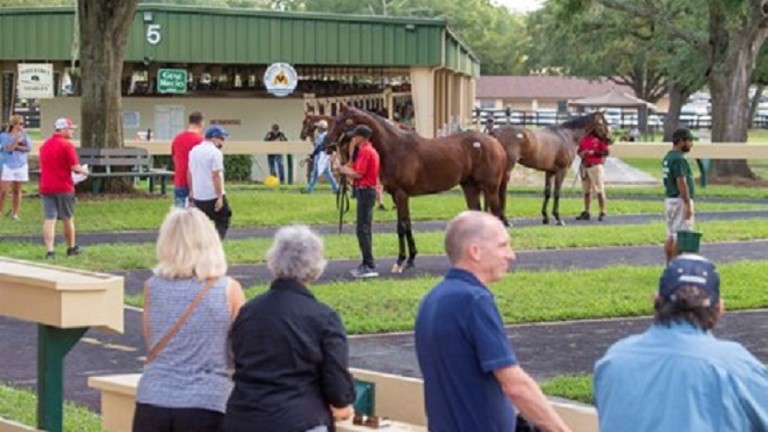 Following the opening session of this week's OBS June Sale of 2-Year-Olds in Training and Horses of Racing Age, Todd Wojciechowski, director of sales for OBS, said that the June sale is "all grown up." This year's three-day auction, which concluded on Friday, backs up that claim.

Once viewed as the last stop in the two-year-olds in training sale season, the June sale has generated a pipeline of graded stakes-winning graduates in recent years, and as the quality of the stock on offer has improved, so, too, has the auction's popularity with both sellers and buyers.

Fuelled by a competitive marketplace at the top-end of the market and steady trade throughout, this year's June sale established new records across all key economic indicators.

"It was another solid day of trade," said Wojciechowski. "It seemed like there was some urgency by the buyers. It felt like they wanted to get a horse bought today.

"I'm glad the momentum carried through all three days. I'm happy for our consignors. The consignors certainly had a rough go of it last year, and their fortitude and willingness to keep pressing forward paid off for them this year.

"The sale was solid at the top and there was some good strength below it. It was a good horse sale. We're happy."

Topping the sale at $425,000 was a filly by Practical Joke who sold to Gary Young, agent for Amr Zedan during the sale's opening session on Wednesday.

Previously purchased by Billy Williams for $45,000 out of the Taylor Made Sales Agency consignment at last year's Keeneland September Yearling Sale, the filly breezed a quarter-mile in :21 1/5, a bullet work in the second under tack preview.

Showing the way in Friday's session was a grey or roan filly by Frosted consigned by Silvestre Chavez Thoroughbreds, agent, who was purchased for $410,000 by Mike Ryan, agent.

Bought for owner Jeff Drown, the filly is out of the Smart Strike mare Saratoga Summer and is a half-brother to Grade 3 winner Summersault and to stakes-placed Singular Sensation.

The filly was previously purchased by de Meric Stables for Backstretch Farms for $115,000 as a weanling at the 2019 Keeneland November Breeding Stock Sale.

FIRST PUBLISHED 1:42PM, JUN 12 2021
It seemed like there was some urgency by the buyers. It felt like they wanted to get a horse bought today