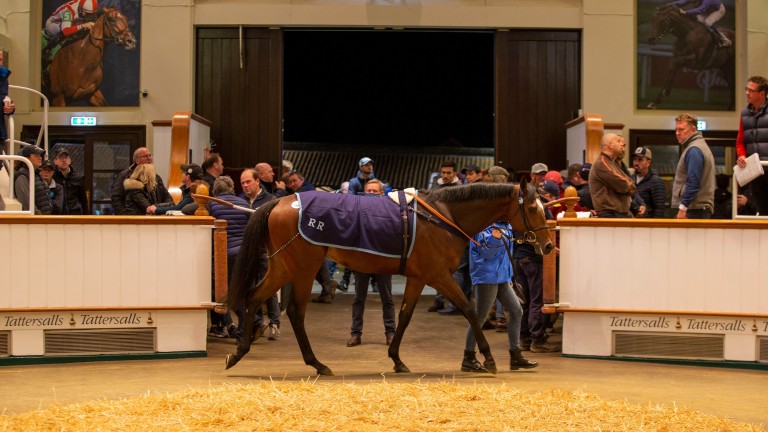 A marathon bidding duel kicked off at around 7pm on day two of the Tattersalls Autumn Horses in Training Sale in Newmarket on Tuesday, and the outcome was Grocer Jack bringing the highest price of a remarkably strong session at 700,000gns.

Matters boiled down to a back and forth between the team from the big-spending Saudi Arabian operation Najd Stud and Michael Donohoe of BBA Ireland, who began bidding down the back stairs before swiftly relocating to behind the partition, and finally the entrance by a packed gangway.

After what appeared to be some deliberation, it was Saad bin Mishraf of Najd Stud who struck the decisive blow for the Ronald Rauscher-consigned offering.

"I'm shaking!" joked Bin Mishraf after signing the docket. "His target will be the Saudi Cup, which is the most valuable race in the world. He's by Oasis Dream and hopefully he can improve more and do the job for Prince Faisal bin Khaled. We thought we could get him for 400,000gns but we had tough competition as some people have the same target as us. 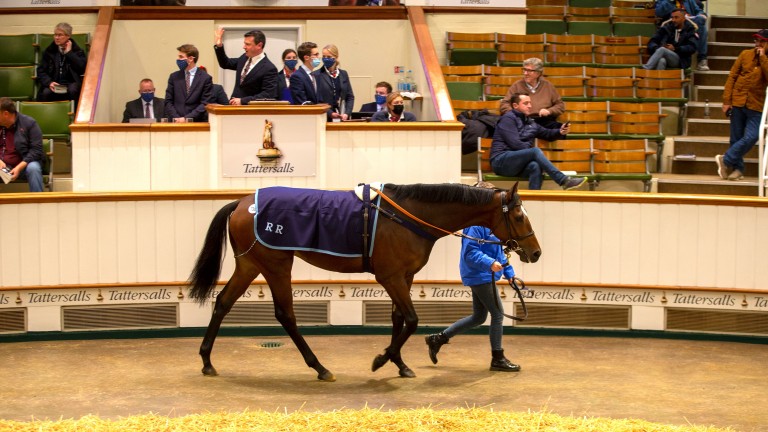 Lot 738: Grocer Jack passes in front of the Park Paddocks rostrum before topping day two of the Autumn Horses in Training Sale at 700,000gns
Laura Green

"The prize-money in Saudi has grown very much, there are a lot of races with big prizes now, and this horse deserves to be there. If there was no Saudi Cup I wouldn't have paid 300,000gns for him."

Bin Mishraf added: "No matter what you spend, sometimes it works, sometimes it won't work. You can spend three million on a yearling and it won't break its maiden, and that's the same everywhere."

The son of Oasis Dream has won a brace of Group 3 races for German trainer Waldemar Hickst, and was last seen landing the Preis der Deutschen Einheit at Hoppegarten. 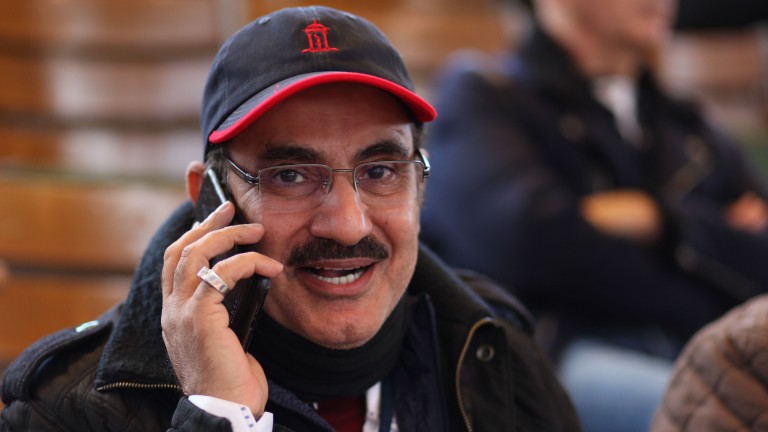 Homebred by previous owner Dr Christoph Berglar, Grocer Jack is a half-brother to the Listed scorer Ghislaine and out of the Group 3 winner Good Donna, a daughter Doyen from the further family of Fame And Glory and Legatissimo.

Grocer Jack headed an eight-lot haul for Najd Stud, which brought a combined spend of 1,481,000gns and also included the 310,000gns My Frankel, who was consigned by Sir Michael Stoute's Freemason Lodge Stables.

The fevered demand was also reflected in the clearance rate, which saw 256 of 275 offered lots change hands at a clip of 93 per cent.

Stuart Boman of Blandford Bloodstock signed the ticket for the session's third- and fourth-priciest lots, headed by the 380,000gns Dancing King, who won four races and achieved a peak Racing Post Rating of 108 for Mark Johnston.

The three-year-old son of Free Eagle belied a yearling price tag of just 18,000gns, with his talent far more in keeping with his smart pedigree, being out of a Listed-winning sister to champion German sire Areion.

Although Dancing King's winning run began in a Wolverhampton handicap back in March, his rate of progress continued into his most recent success, which came in the Group 3 March Stakes in August.

Boman said: "He's going abroad for an established client of Blandford's. He's a lovely horse, a last-time Group 3 winner, and he's an outstanding horse to look at.

"I have to congratulate Mark Johnston for finding a horse of his quality as a yearling as cheaply as he did. The horse is called Dancing King and he has danced every dance; he shows up every time and he always puts it in." 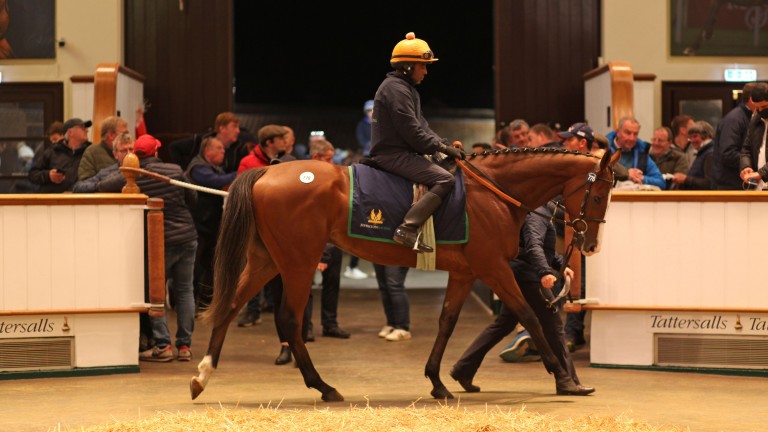 Earlier in the session Boman landed the classy Makram on a bid of 340,000gns. The four-time winner boasts an RPR of 106 after his most recent victory in a 0-105 Newbury handicap.

The four-year-old son of Make Believe was offered by Barton Sales on behalf of Roger Charlton's Beckhampton Stables and will now continue his racing days in Australia.

Boman said: "He's a lovely horse. Obviously we paid a lot for him but from an Australian perspective this is the right profile and he's been purchased for an Australian client of mine.

"He's done everything, won over a range of distances and on a variety of going and looks very progressive. He's been beautifully handled by Roger Charlton and his team. He was a last-time-out winner of a good handicap at Newbury and looks like he could be stepping into Group company next year.

"He's a perfect sort for races like the Caulfield Cup, or maybe even a Melbourne Cup. I know that might be a big statement about a horse who's only a handicapper at the moment, but he fits the profile and looks like a horse who'll keep improving."

Bred by Frank Dunne out of a Sinndar sister to Youmzain, Makram changed hands for the second time, having been purchased by Hugo Merry Bloodstock at €90,000 at the 2018 Goffs Orby Sale.

Classy juvenile Maglev is set to continue his career in the US after Tattersalls regular Tim Cohen of Red Baron's Barn and Rancho Temescal landed the son of Galileo Gold at 300,000gns.

The colt, offered on behalf of MM Stables by Somerville Lodge, won one of his five starts for the Haggas team and boasts a peak RPR of 103 after finishing fifth to Wings Of War in the Mill Reef Stakes.

"He pushed me a little bit further than I wanted to go!" joked Cohen as he gestured towards his son Cole, who was joined by bloodstock agents Alastair Donald and Joe Miller. "There are a couple of stakes races out in California towards the end of the year but it's really his three-year-old season we're looking forward to.

"His form is excellent, he vetted well and I thought he was one of the better two-year-olds in the sale. Alastair and Joe were very confident in him so we kept going. We think he's the first Galileo Gold to go out to the States, and he might be the most expensive too!"

Maglev is a half-brother to the Group 1-placed sprinter Acklam Express and was making his third sales ring appearance his most lucrative. He first fetched £25,000 from Tally-Ho Stud when offered by breeder Robert Ryan at the Tattersalls Ireland September Yearling Sale, before Ling Bloodstock paid £210,000 for the youngster at the Goffs UK Breeze-Up Sale.

Rupert Pritchard-Gordon dug deepest into the Shadwell draft on day two when going to 220,000gns for Ikhtiraaq, a two-year-old son of Invincible Spirit last seen winning a Leicester novice stakes for Owen Burrows.

Pritchard-Gordon, who was decked out in a Romanised cap, revealed he had been acting on behalf of that dual Group 1 winner's owner Robert Ng.

"We've had a good look at a lot of Shadwell horses and my client was keen to have a go on a couple of them, particularly the two-year-olds, and we really liked the profile of this individual," he said. "He ran well first time out, he's probably still learning on the job but I think he beat a couple of nice horses the other day."

Ikhtiraaq, a brother to the Listed-placed Mutaaqeb and from the further family of Bahri, achieved an RPR of 84 for his Leicester success, in which he beat the 2,700,000gns Akhu Najla, a Kingman half-brother to Galileo Gold. 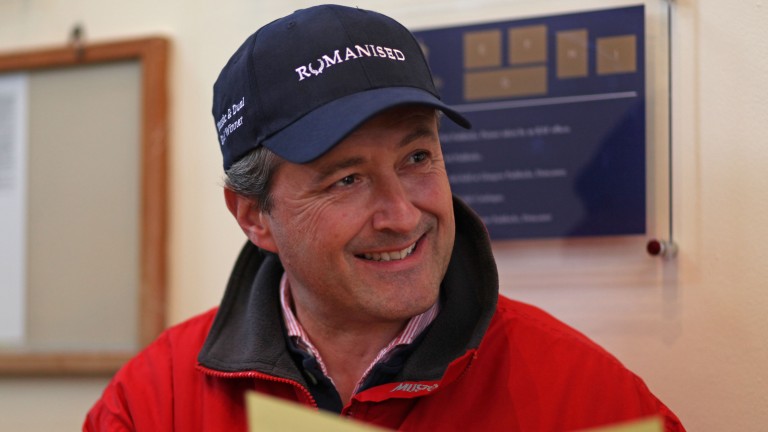 "With a bit of luck there'll be more to come from him next year, he's got every chance with a pedigree like that, and if he can keep improving he'll be one to look forward to next year," added Pritchard-Gordon. "My client has horses in training with Ken Condon and Sir Michael Stoute but we'll just see where we go tomorrow morning."

Pritchard-Gordon was back in the thick of it later on when going to 220,000gns for another from the Shadwell draft in Qitaal, a son of Iffraaj out of a half-sister to Matterhorn, Bangkok, Tactic and Ribchester's dam, Mujarah.

The combined forces of Ronald Rauscher, who later sold the top lot, and Australian Bloodstock made two more noteworthy purchases on Tuesday, headed by the 160,000gns Glentaneous.

Another to come from Brian Meehan's Manton Lodge Stables, the three-year-old son of Gleneagles notched a second victory on his most recent start with a three-and-a-quarter length success over a mile and a quarter at Nottingham.

"He's been bought for Australian Bloodstock," said Rauscher, who added when asked what had appealed about the horse: "Everything, basically! To go to that sort of money you have to like it all. He's a nice individual who hasn't done anything wrong and vetted well. As we saw yesterday, when you want one in this market you have to pull out all the stops. No training plans have been decided yet."

The 97-rated Glentaneous was making his second appearance at public auction, having first sold to Sangster at £46,000 at the Goffs UK Premier Sale in 2019. Later in the session Rauscher added the smart Kettle Hill to Australian Bloodstock's haul at a cost of 150,000gns.

The Shadwell-consigned Elsals made a promising debut when overcoming trouble in running to be a fast-finishing third at York earlier in the month, and that performance plainly caught the eye of Alex Elliott as the agent gave 140,000gns for the once-raced juvenile.

The son of Havana Gold was beaten just half a length by Blenheim Boy, an effort that earned him an RPR of 79.

"He's been bought for a new client and he's going to go to Kevin Philippart de Foy," said Elliott. "I've got a man who's very strong on stats and Kevin's stats come out pretty good, he's had an amazing first year.

"The only way is up for Elsals as he's had only the one start. These Shadwell horses are coming at a bit of a premium and we valued him at lower than that, but trying to buy these horses isn't proving easy this week."

Elsals was homebred by Shadwell and is out of Ejaazah, a Listed-placed daughter of Acclamation who in turn is out of Sweet Solera Stakes scorer English Ballet.

Elliott added: "When you're up against Gaelic Bloodstock, who are very sharp fellas, you know you're on the right horse and you're better off paying a little bit more for the ones you want.

"We'll put him away now and hopefully he can win his maiden next year and go from there. The sky's the limit for a horse like that and it's good to be supporting younger guys who are doing well like Kevin, so it's an exciting venture."

The Tattersalls Autumn Horses in Training Sale continues on Wednesday, with the third session starting at 9.30am.

Coolmore-consigned Horoscope on top at Tattersalls at 325,000gns