James Thomas sees a solid session of selling in Newmarket 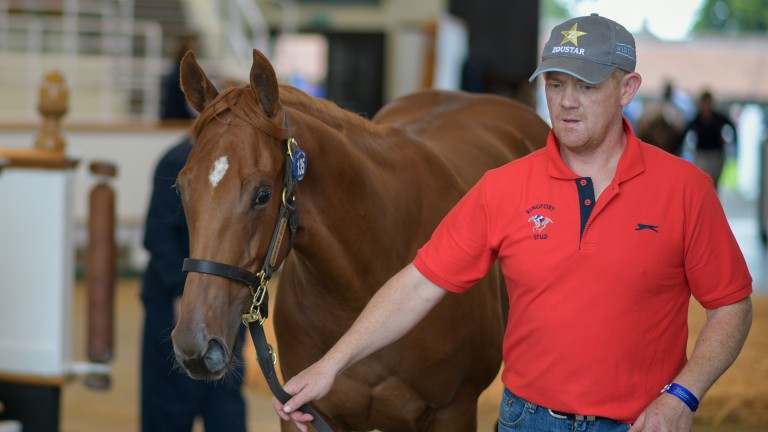 That has been borne out on the racecourse thanks to a roll of honour that includes the likes of Miss Amulet, Steel Bull and Shadn, a list that defies the fact the first three editions of the sale averaged less than £11,000 apiece.

And on Monday this year's renewal produced a session of notably solid trade that brushed aside some justified market anxiety as all key metrics ran ahead of last year's levels.

There was a significantly bigger catalogue, with the 250 offered lots representing a 56 per cent increase, but the sheer weight of numbers alone did not account for the 81 per cent rise in turnover as the sale grossed 2,341,350gns.

The average and median prices also rose, with the former up 13 per cent to 11,535gns and the latter up by five per cent to 8,000gns. But arguably the most encouraging metric was the clearance rate, with 203 yearlings finding a buyer at a clip of 81 per cent.

Heading the market was the Profitable filly out of Sassy Gal who went the way of Kevin Ross for an Ascot record price of 58,000gns when offered by Ringfort Stud.

The dam has produced five winners from six runners, including useful performers like Ben Hall and Mayfair Spirit, while the first crop of yearlings by Darley's Profitable have been the subject of plenty of positive reports during the sales season's opening acts.

This filly also boasted a notable pedigree update with her second dam having produced Pardoven, who in turn is the dam of this year's star juvenile Minzaal.

"She's the pick of the horses we've seen here," said Ross. "She's a lovely filly and the sire is stamping his stock well. We bought one by him in Doncaster too. She's a lovely walker and the dam and her progeny are all well rated.

"The update is nice for a filly's pedigree too. She's been bought for Paul and Clare Rooney. We're just looking for nice athletes and that's exactly what this filly is." 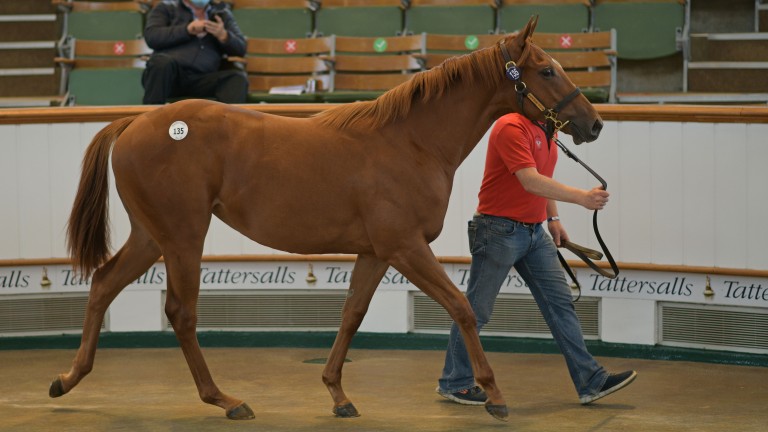 The sale topper, about whom Derek Veitch said: "it wouldn't have mattered what sale she was in, she'd have stood out"
Melanie Sauer

The transaction continued a hot run of form for Derek Veitch's Ringfort Stud, who bred the aforementioned Gimcrack Stakes hero Minzaal and the Lowther Stakes scorer Miss Amulet, whose El Kabeir half-sister sold to Nick Bell for 45,000gns later in the session.

"In the current climate it's almost magical, isn't it?" said Veitch. "It's very hard to get people to buy horses at the moment."

When asked about the impact the sale switching from Ascot to Newmarket had had on the market, the consignor said: "It's not a negative, and personally I think it's a positive. I thought taking more horses might have diluted the quality but I actually think it's stepped up with some of the bigger vendors here. It's gaining momentum."

Veitch went on to explain that Miss Amulet had yet to reveal the full extent of her ability when he was choosing which sale to send her sibling to. He said: "Miss Amulet wasn't around when I was making these decisions back in May.

"The Profitable filly looks like she'll be ready to rock and roll early. She sold herself once she came up to the ring, she looked amazing and it wouldn't have mattered what sale she was in, she'd have stood out." 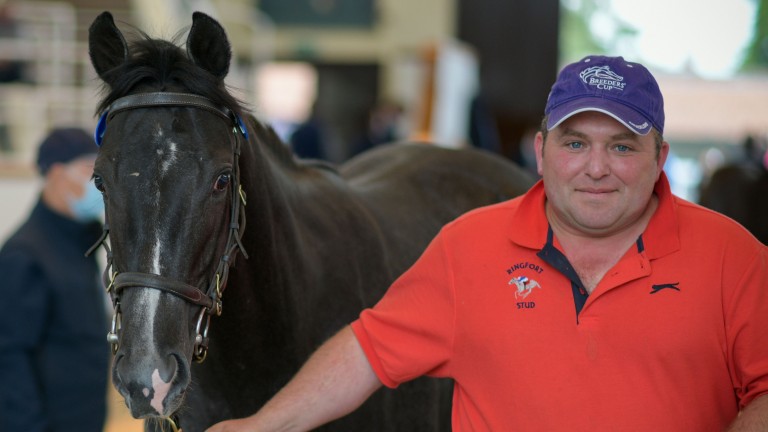 Veitch also reflected on the Group-race double the Ringfort graduates recorded during the Ebor meeting. He said: "The 24 hours in York were amazing, winning a Lowther and a Gimcrack was great, especially having won the Gimcrack the year before [with Threat]. Somebody will think I know what I'm doing soon!"

While Ross said no decision had been made as to who will train the session-topping Profitable filly, Miss Amulet's half-sister will head into training in Newmarket at Michael Bell's Fitzroy House base.

The trainer said: "She's for Chris Wright, who's been a long-standing owner and has his own stud farm. Annoyingly we looked at Miss Amulet at last year's sales but obviously didn't buy her. This filly is a bigger individual than her half-sister, from what I'm told by Nick. We also bought an El Kabeir at Doncaster so our eggs are in his basket."

Trade held up throughout the session, and as dusk set in around Park Paddocks Aidan 'Mouse' O'Ryan went to 47,000gns for a colt from the debut crop of Mondialiste offered by Norris Bloodstock.

The January-born foal was bred by the late Geoff Turnbull's Elwick Stud, which is also home to the dual Grade 1 winner Mondialiste. The colt is the second foal of Break Free, a placed daughter of Oasis Dream and the German 1,000 Guineas winner Penny's Gift.

"He's a lovely horse and you'd have to give the sire a chance as he was a very good racehorse," said O'Ryan. "He sold himself and hopefully he'll be lucky. He's going to Richard Fahey."

Reflecting on the state of the market at the Ascot Sale, O'Ryan said: "Trade is very good for the stock that's here. There are plenty of breeze-up men reinvesting, which is great. I've found a good trade at every sale since lockdown ended, especially considering what's going on in the world.

"It doesn't matter where the venue is, as you could sell a good horse at a crossroads."

Another of the day's headline acts was by a more established sire, with Joe Foley going to £44,000 for the Night Of Thunder filly out of Operettist offered by Houghton Bloodstock.

Although Night Of Thunder has given notice that he is one of the stallion ranks' most exciting young recruits with 17 stakes winners worldwide, Foley said the presence of Singspiel as damsire was also a big draw.

He said: "She's a good-looking filly and Night Of Thunder is a very promising sire. Singspiel has been very lucky for us too, he's the broodmare sire of Suedois and Lady Kaya, who was by Dandy Man.

"She's been bought for Clipper Logistics. We'll get her home now and decide on a trainer in the spring."

The filly was bred by Longview Stud and Bloodstock and is from the third crop of Night Of Thunder, which was conceived when the Classic-winning son of Dubawi switched from Kildangan Stud to Dalham Hall, where he stood at a fee of £15,000.

Another first-crop sire to register a big result was Overbury Stud's Ardad, with Ross Doyle going to 43,0000gns for a filly offered by Britton House Stud.

Out of the unraced Poet's Voice mare Poesy, the February foal traces her page back to the likes of July Cup hero Sakhee's Secret. The filly is due to head into training with Richard Hannon.

"She's a nice racy filly and fitted the bill for us physically" said Doyle. "She looks tough and has a good attitude and a nice back pedigree as well.

"The Ardads look nice; he was a fast horse himself and was well bred and he looks to be getting nice stock. There are a few of those first-season sires who are stamping their stock, which is good to see, I just hope we land on the right one."

Another for Night Of Thunder

Another purchaser who went in hot pursuit of a Night Of Thunder yearling was jump jockey turned breeze-up consignor Mark Grant, who gave 42,000gns for a son of the Darley sire offered by Houghton Bloodstock.

Grant will be hoping to repeat the success he enjoyed earlier in the year, having pinhooked another of Night Of Thunder's offspring for €35,000 before reselling the filly for £75,000 to Global Equine Group at the Goffs UK Breeze-Up Sale.

"We waited all day for him," said Grant, who struck four lots from the close of trade. "He's bred on the Night Of Thunder over Pivotal cross; I love a Pivotal mare and obviously Night Of Thunder is a sire on fire.

"I had a Night Of Thunder filly last year and we did well with her. I didn't actually think I'd be able to buy another one but I'm glad I had the budget to get him. He looks like he'll be early as he's a big strong horse."

Two lots fetched £40,000, with WH Bloodstock selling a Profitable colt to Michael Donohoe of BBA Ireland and John Tuthill's Owenstown Stud supplying breeze-up consignor Robson Aguiar with a colt from the debut crop of Cotai Glory for the same sum.

"I'm absolutely delighted," said Tuthill. "He's a very nice horse; he's racy and looks a two-year-old sort. He exceeded my expectations. I knew he was a nice horse but I put a modest reserve on him and let the market do the rest and we're delighted with where he ended up."

Tuthill, who also offered yearlings at last week's Goffs UK Premier Sale, said of trade so far this year: "I've had modest expectations but I've been lucky so far. Times are tough so we're just taking each individual as it comes and trying our best. There'll be no heroics this year."

Owenstown Stud was consigning at the Ascot sale for the first time, and of the experience Tuthill added: "I don't really mind where the sales are, so long as the sales take place. Hats off to the sales companies and the wider industry for putting everything in place to allow us to sell these horses."

At the conclusion of the sale, Matthew Prior, head of Tattersalls Ascot, said: "We have witnessed robust trade throughout the day, and it is hugely pleasing to see gains made across the board.

"Vendors have noticeably increased the quality on offer and have been rewarded with both strong domestic and international participation.

"Our thanks go to Tattersalls for accommodating the relocated sale to its headquarters in Park Paddocks, along with Great British Racing International who have assisted in the promotion and airport transfers for those travelling from further afield.

"We look forward to charting the progress of this year's graduates, from a sale that goes from strength to strength.’’