Nyquist colt heads the way of Coolmore for $2.6 million at the Gulfstream Sale 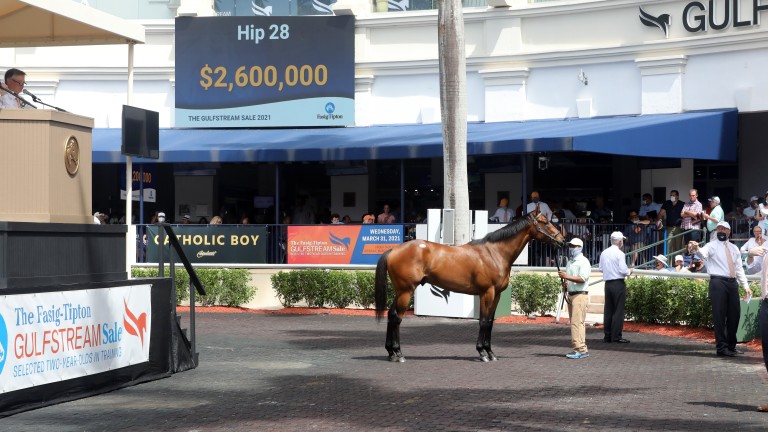 Hip 28, Wavertree Stables' Nyquist colt sells to Michael Tabor for $2.6 million at the Gulfstream Sale
Fasig-Tipton Photos
1 of 1
By Meredith Daugherty/Christine Oser of Bloodhorse 10:43AM, APR 1 2021

Coolmore made an early impression at the Gulfstream Sale when going to $2.6 million for a colt by Darley stallion Nyquist and ultimately topping Fasig-Tipton's select two-year-olds in training sale.

"It was a good start to the two-year-old sale season for us," said Fasig-Tipton president and CEO Boyd Browning Jr. "We're thrilled to be back at Gulfstream Park. I think it was a typical two-year-old sale, great demand and great interest at the top of the market place for what are perceived to be the quality offerings. The most encouraging thing in that regard was the diversity of buyers across the board. There were lots of bidders willing to spend plenty of money."

While there appeared to be larger number of horses withdrawn from the original catalogue of 186 individuals, Browning said the number of outs was not atypical of the market.

"It is the same as 2019, 2018, 2017, 2016, 2015 - people have options," said Browning. "If they don't have what they perceive to be the appropriate number of potential buyers, they have other sales they can go to or go to the races. There is not an extreme pressure to sell. This is not the last stop; for a lot of them it is the first stop. There will be the same thing next year. We will have more scratches than we would like and more RNAs than we would like, and a lot of them will go on to other sales and be successful."

Having made the trip across the pond to attend the premier auctions, Coolmore connections stayed busy buying throughout the afternoon. But in hip 28 they said the colt was everything they were looking for in a top-level racing prospect.

"He's by Nyquist, who looks like he's one of the best young stallions around right now," said bloodstock agent Jamie McCalmont, who signed the winning ticket. "He breezed in :09 4/5. Very few horses went in :10 flat much less :09 4/5. He did a good gallop out and came out of the work good. He trained well in the week before, and he's a very nice horse. He'll be going to Bob Baffert."

Consigned by Wavertree Stables, the colt is out of the Smart Strike mare Spinning Wheel and from the family of Preakness Stakes second Ride On Curlin as well as Test Stakes winner Victory Ride . Bred in Kentucky by G. Watts Humphrey, he had been purchased as a yearling for $160,000 by Redwings from the Lane's End consignment to the Fasig-Tipton Selected Yearlings Showcase.

"Breezing the fastest eighth-mile never hurts. He was a stunning individual," said Ciaran Dunne of Wavertree. "He's just a big, strong colt with plenty of family behind him. Like I've been saying all week, the farms that raise good horses do it and it's not an accident, and Shawnee and Watts Humphrey, they've been doing it for longer than I've been in this game.

"You're always confident with ones that come from them; they have been raised properly, have gone through the protocol, and they've been raised to be racehorses, not to be sale horses. I think that's a big part of it, just the bottom side on the dam side."

He added: "Nyquist, obviously, got really hot after we bought the colt, and we had several last year for Mr Reddam. We've believed in them and they've come along and developed to where everybody recognises him for the quality stallion he is. And then just as an individual he was stunning. He grew up in all the right ways. He got big and strong without getting gross and showed himself like a champion. He's a pretty cool horse. I hope he's as good to Michael Tabor as he was to us."

Coolmore's Tabor said the colt's final price was possibly inflated this year due to the announcement by The Jockey Club in the United States that they would place a cap on the number of mares able to be bred by a stallion in North America to 140. However, for stallions born in 2019 and earlier, there will be no limit to the number of mares reported bred in the United States, Canada, and Puerto Rico.

"The Jockey Club stallion cap will reduce the value of these horses from next year, so it's hard to imagine prices like this being repeated unless it is to go abroad," said Tabor, who added he will look to review his buying strategy at upcoming sales.

Three Kentucky stud farms, including Coolmore's Ashford Stud [as Bemak N.V.] have filed suit against The Jockey Club and the cap on mares bred. The Jockey Club filed a motion in federal court on Monday to have the complaint dismissed.

Coolmore returned less than an hour later to the Wavertree well to purchase another colt (hip 67) for $1.3 million. By Ashford Stud's Uncle Mo, the juvenile is a full-brother to Grade 1 winner Dream Tree.

Bred in Kentucky by Mike and Pat Freeny, he is out of Afleet Maggi and was purchased by Knights Bloodstock for $335,000 from the Taylor Made Sales Agency consignment to the Keeneland September Yearling Sale.

Dunne - who also consigned Dream Tree to the same sale at two where she was purchased for $750,000 - said the colt didn't share many physical characteristics with his sister, but was instead "heavier" and "prettier" than the mare.

"Uncle Mo is a sensational stallion," said Dunne. "We missed the boat on him early, but we were lucky enough to have Dream Tree, who's a full sister to the colt we sold today, and she made a believer out of us.

"Unfortunately, it was a little too late. Now they're very hard to buy, and this colt is as expensive a colt as we've ever bought really. But we loved him and we took a chance, and he delivered for us. He's a really good horse too. We're hoping to have a champion on the East Coast and the West Coast." 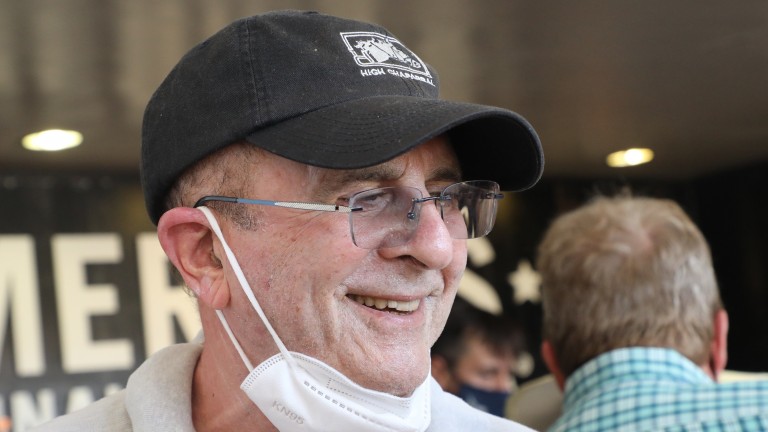 Michael Tabor: "We wouldn't have bought him if we didn't like him. We're very happy to have these two animals."
Fasig-Tipton Photos

"The colt will go to Todd Pletcher," said Tabor. "I've had horses with Todd Pletcher ever since I can remember. When I had a Derby winner, he was working in 1995 for Wayne Lukas, so we go back a long way. He's a very, very good trainer.

"Fasig-Tipton, the whole atmosphere that surrounds this sale down here, they do a marvellous job," said Dunne, who sold 11 individuals for $5,930,000 on Wednesday.

"I think this year is an unfair year to judge because their market is so international, I'm not sure they were quite able to get everybody back to the table. There were a lot of faces missing that we've seen in the past, most notably the Japanese. I haven't looked at the sales results, maybe they're very active on the Internet, I don't know. But Fasig does everything right. It's a wonderful setting, and it's been very good to us traditionally."

With plenty more to look forward to on the juvenile sales calendar, Browning said he was more than pleased to see that the market had proven sufficiently strong and elastic as the world and the global economy continue to fight the effects of Covid-19.

"The two-year-old game is still a game of performance and vetting," said Browning. "There are even more hoops to jump through than there used to be. You have to breeze well in a good time, gallop out well, make a good video, and the veterinary scrutiny increases every year.

"Overall, I think it was a healthy marketplace. People want quality horses, and I think it bodes well for the rest of the two-year-old sales and gives us encouragement for the yearling sales starting this summer."

FIRST PUBLISHED 10:43AM, APR 1 2021
He grew up in all the right ways. He got big and strong without getting gross and showed himself like a champion