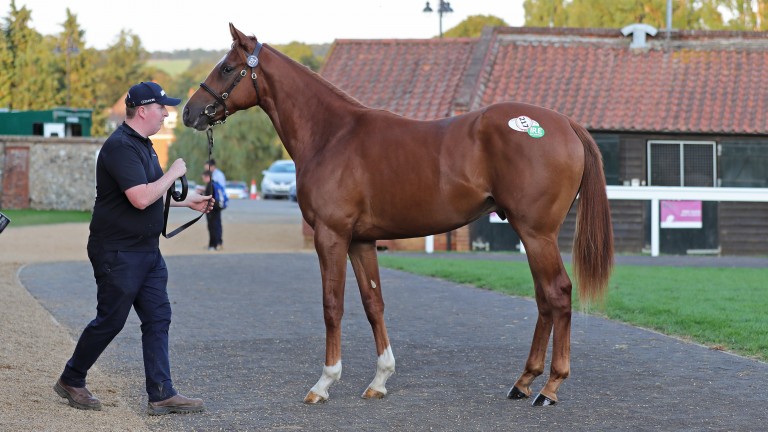 The momentum generated at the early yearling auctions continued unchecked during day one of the Tattersalls Ireland September Sale in Newmarket on Tuesday as a £130,000 son of No Nay Never headed a buoyant market.

Johnny Collins and Tom Goff, stationed at opposite ends of the Park Paddocks ring, tried hard to secure the Castlehyde Stud-consigned youngster, but it was Adam Driver of Global Equine Group who had the final say with the winning bid struck online.

The colt is out of the Galileo mare Pink Damsel, a winning sibling to the Group 3 scorer Say, who is better known as the dam of Grade 1 Summer Stakes hero Fog Of War.

"We brought him here to stand out and he did," said Castlehyde manager Paddy Fleming. "He was a very straightforward horse who vetted well. He was born and raised at Castlehyde on good limestone land and grew into a fantastic yearling.

"The mare has been good to us and [half-brother] Sarsons Risk was third on debut at Newbury and runs at Newmarket on Thursday. She has a lovely Ten Sovereigns colt foal who'll probably go to the sales and is in foal to Wootton Bassett." 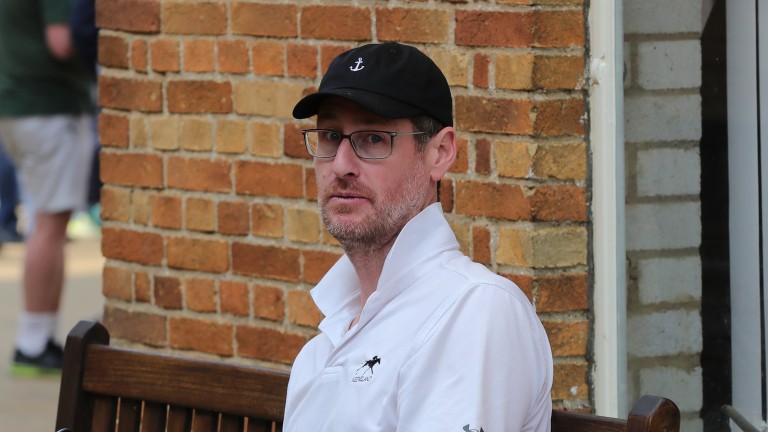 Driver was present in the ring earlier in the day when he secured the Churchill colt out of Komedy consigned by Grange Hill Stud at £110,000.

The agent said his client was yet to firm up training plans, but said of his purchase: "We really liked him. He's a big, solid horse and Churchill is tipping away this year with his first two-year-olds; we already have two by the sire in training with Tom Clover and we like what we've seen of those. We just loved this horse as a physical."

The colt is the third foal out of Komedy, a winning daughter of Kodiac whose siblings include the Listed scorers On Her Toes, who is also by Kodiac, and Jane's Memory. The mare, whose first foal is the Listed-placed Internationaldream, joined the Grange Hill broodmare band at a cost of just 9,000gns.

"He's a very taking individual and from what I've seen at home I thought he'd be a standout at this sale," said Grange Hill's Mark Hanly, who bred the colt with his mother Stephanie. "He's a magnificent looking animal and the sire is ticking a lot of boxes already even though it's only early days." 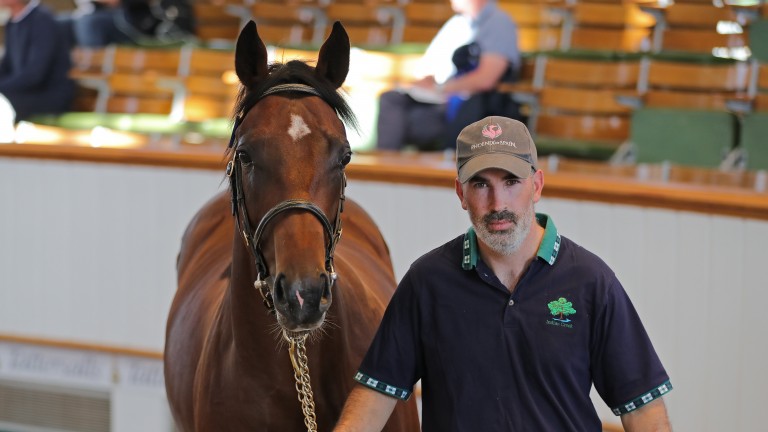 Hanly added: "The mare is a typical Kodiac and when I first saw Churchill at stud I absolutely loved him. The cross with the Kodiac mare suited as well as it's Galileo over Danehill. Jessica Harrington has the two-year-old full-sister [Komedy Kicks] and from what I hear she sounds promising. The mare is barren but is on an early covering to Saxon Warrior."

No sleeping for policeman Carrick

Leon Carrick proved that an off-duty police officer doing a spot of online shopping can be an unlikely recipe for pinhooking success when his Ardad colt who was picked up for a mere 7,500gns generated a huge profit when knocked down to Robson Aguiar for £105,000.

The colt took his first turn in the sales ring before his sire's debut two-year-olds hit the track, but with the Overbury Stud resident having supplied 18 winners, headed by the Prix Morny hero Perfect Power, Ardad's stock are now in much higher demand than they were nine months ago.

"We're absolutely delighted, over the moon," beamed Carrick, who was joined by his girlfriend and the colt's co-owner Michelle Gibbons. "We buy a few cheap foals every year and try to make a few quid. Never in our wildest dreams did we expect to get £105,000 for him though." 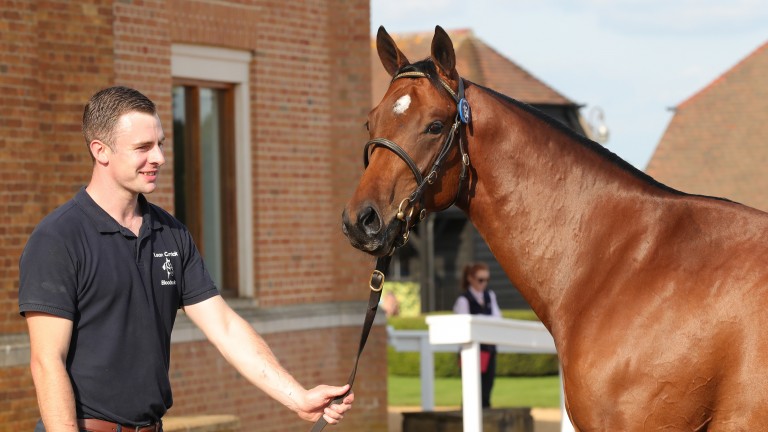 Expanding on the unusual circumstances surrounding their almighty pinhooking success, Carrick said: "When we bought this horse we were actually lying in bed online shopping! I work as a Gardai and had just come in after the night shift. I loved how this colt walked and showed himself on the video, so I got a friend to check him out and we were lucky enough to get him for 7,500gns.

"A special thanks has to go to my uncle Johnny Collins, he owned the horse jointly with myself and Michelle, and Richard Brabazon who allowed us to use his facilities to prep the horses."

When asked what the couple would spend the proceeds from this sale on, Carrick said: "This'll give us a big boost and hopefully help us buy a better quality of foal in the future. Michelle wants to go to college too and I think this will go a long way to paying for that with a little change as well. If we get a few more results like this I might have to start doing this full-time."

The Leon Carrick Bloodstock social media channels had done a fine job of promoting the colt's laid back temperament, as a video showed the youngster taking a snooze while resting his head on his consignor's legs.

"He's been an absolute gent to do anything with," said Carrick. "I went in there and sat beside him the other night and he came and rested his head across me and went to sleep. The hardest part at the sales has been getting him up when he's asleep! I think Ardad breeds a nice temperament into his horse and definitely upgrades his mares."

Aguiar, who put Ardad himself through his paces at the breeze-up sales in 2016, confirmed his purchase would carry the increasingly familiar purple colours of Amo Racing. He said: "He's been bought to race for Amo Racing. He stood out for me as one of the sharpest colts in the sale. He'll come back to me and I'll pretrain him and we'll see where we send him once we've seen how he goes."

Doyles on a spree

Ross Doyle was busy throughout the session and his £466,000 haul was topped by a £90,000 daughter of Farhh consigned by Knockainey Stud who is now bound for the yard of Richard Hannon.

Doyle said: "She's a very nice filly by Farhh, who Richard has had success with before with King Of Change. We've also been very lucky buying off Nelius Hayes before, and she's as nice a filly as I've seen Nelius bring to the sales in a couple of years. She's a nice size and has a bit of class to her as well."

The filly is out of the Teofilo mare Imasumaq, a half-sister to the dam of Windsor Castle Stakes winner Southern Hill who was sourced by BBA Ireland for just 16,000gns with the daughter of Farhh in utero. 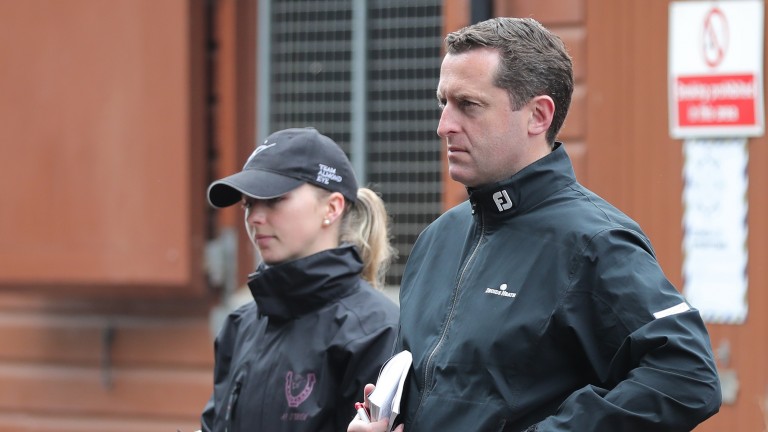 "The mare was bought by a neighbour of mine, Michael O'Dwyer, for 16,000gns so this is a fantastic result," said Knockainey Stud's Nelius Hayes. "Everybody just seemed to like her but we had no expectation of her going for anything like that. I'm delighted Richard and Ross got her. I've had horses in training with Richard and Ross's father, Peter, bought me my first mare, Rain Dancing, a long time ago."

The Doyles' nine purchases also included a £62,000 son of Footstepsinthesand consigned by WH Bloodstock. Doyle said: "Footstepsinthesand is a stallion we've had a lot of luck with, particularly at this sale as we bought Larchmont Lad at Tattersalls Ireland a few years ago. This colt comes from a very good home. He's just a nice horse and he has been bought for Richard Hannon on spec."

One other lot fetched £90,000 when JD Moore and Ed Dunlop combined to secure the Fast Company colt out of Portico consigned by Coole House Farm. The youngster is a brother to Flashcard, who finished third in the Group 3 Sovereign Stakes, and from the further family of Windsor Forest and May Hill Stakes heroine Spacious.

Tom Ward was among the trainers in attendance at Park Paddocks and walked away having secured a well-related Dark Angel filly at £80,000.

The April foal continued a hot spell for Guy O'Callaghan's Grangemore Stud as the operation saw its homebred Wings Of War run out a taking winner of the Group 2 Mill Reef Stakes on Saturday.

The youngster is the first foal out of Light My Fire, a daughter of Dragon Pulse who won two races and also finished third in the Group 3 Firth Of Clyde Stakes. Ward said: "She's a very nice filly out of a mare who was very quick and obviously proved herself to be stakes class.

"She's for a new client, which is very exciting, and I'm hoping that she will be running fairly early and we’ll have a lot of fun with her."

The Tattersalls Ireland September Yearling Sale continues on Wednesday at 10am.