Malone goes to £50,000 for 'beautiful' Secret Scripture at Goffs UK 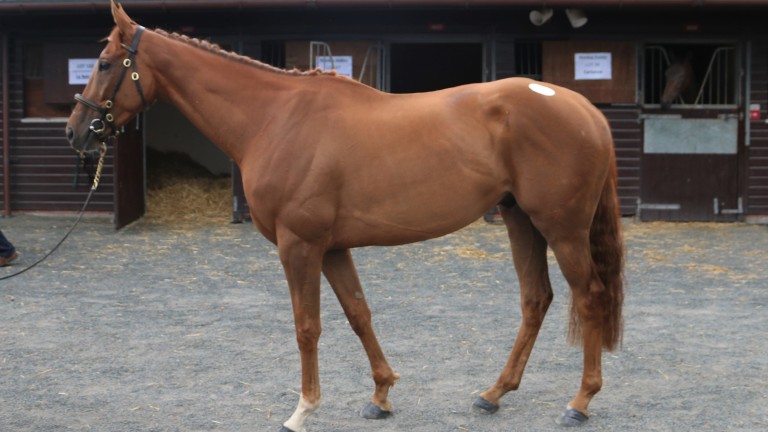 After a sedate start to the opening day of the Goffs UK August Sale, the well-related Secret Scripture attracted a flurry of bids before selling to Tom Malone for £50,000.

Winner of his second point-to-point start at Grennan over three miles in the spring, the Mount Nelson five-year-old has the pedigree to match his latent talent on the track and commanded plenty of attention in the ring.

That trio are in turn out of Kauto Relstar, an Art Bleu half-sister to the prolific Kauto Star and Down Royal Champion Chase victor Kauto Stone.

Malone revealed a step down in trip could be on the agenda for Secret Scripture, a move that might pay off given his dam’s best form came over two to two and a half miles.

He said: “A lot of Donnchadh’s weren’t right last year, but he said to me that this horse had ability.

"He probably wasn’t truly getting three miles, he’s not bred to get three miles - all his pedigree was two, two and a half miles - and it looked like by the last fence in his point he was going to win by ten lengths and then scraped home by a length.

“I put that down to him not getting the trip properly, so he could drop back to a two-mile maiden hurdle."

SECRET SCRIPTURE was an @irishp2p winner on only his second start having jumped & travelled strongly throughout. The 5YO son of Mount Nelson from the family of Kauto Star is offered by @MonbegStables.

Malone added: “He’s a big, beautiful horse. He was a €50,000 store, so Donnchadh spent two years training him to get £50,000 back - it wasn’t a great day’s work for him but he’s had some great days with other horses and we all need a bit of luck.”

Golfe Clair was snapped up by Phil Kirby after a chance meeting with new owner Peter Rawcliffe, with Joseph O’Brien’s former charge set to go chasing after a maiden hurdle win at Clonmel in June.

Explaining the £40,000 purchase, Kirby said: “The owner wanted something to go to war with, he’s a straightforward horse and Joseph recommended him. He’ll start off hurdling with the aim to go chasing as he’s a nice, good moving horse."

Rawcliffe added: "I inherited some horses from my brother, but I was recommended to Phil and I met him for the first time yesterday!”

Williams at the double

Evan Williams struck early on when going to £42,000 to secure Canford Light, a son of Canford Cliffs who had won a Kilbeggan maiden hurdle by six lengths last month.

Lot 22, Canford Light, placed second on his latest start and sells for £42,000 to @EWilliamsRacing. Consigned by Doninga Stables. pic.twitter.com/bJ5QJzVdZE

Consigned by Tom Mullins’ Doninga Stables, Canford Light had run eight times on the Flat without a first-four finish before going hurdling, which he immediately took to with a second on his debut in a big-field maiden hurdle at Punchestown.

The four-year-old is out of the winning Dylan Thomas mare Way Of Light, a full-sister to the stakes-placed Duchess Of France and herself out of a full-sibling to Prix Eclipse scorer Stella Berine.

Way Of Light has been represented by another winner in The Gurkha filly La Bure, who struck at Deauville last August for Jean-Claude Rouget and Peter Brant’s White Birch Farm.

Williams then went to £25,000 to pick up another Doninga Stables-consigned lot in Loved Out.

The consistent Requinto four-year-old has been placed on his last two starts over hurdles and was also second in a mile maiden on the Flat at Leopardstown last July for the Mullins team.

Artiste makes a splash for Alexander

The Monbeg Stables draft provided another highlight of the session when Great Pretender gelding Etincelle Artiste sold for £40,000 to Nick Alexander.

Second to Crypto Currency in his only point at Kirkistown in May, the four-year-old is a half-brother to two winners in France and is out of a placed half-sister to Monsili, winner of the 2013 Yang di Pertua Negeri Gold Cup at Penang in Malaysia.

Alexander, who revealed Etincelle Artiste had been bought for a syndicate, said: "I love the sire and he was second to a good horse on his only start in a point, so hopefully he’s very good value."

The second and final session of the sale begins at 10am on Thursday.

Lady Buttons: 'She'll race again but we won't be greedy - she's too precious' (£)

FIRST PUBLISHED 6:07PM, AUG 4 2021
A lot of Donnchadh’s weren’t right last year, but he said to me that this horse had ability