Magnier goes to $2.6m to win the battle for sale-topping Into Mischief colt 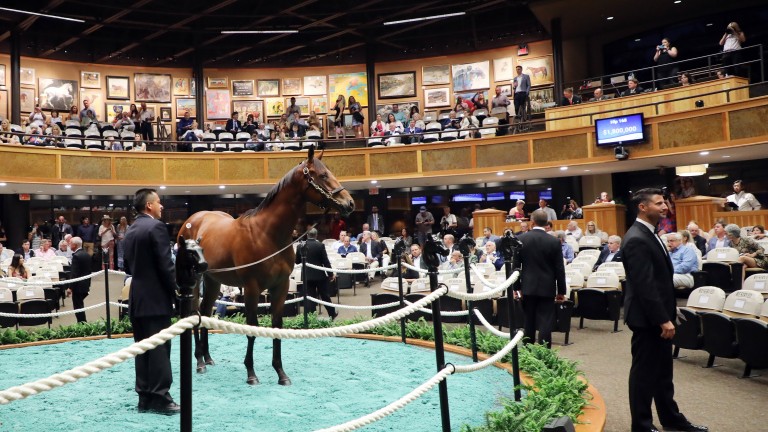 The Into Mischief colt takes in his surroundings before selling to MV Magnier at the Fasig-Tipton Saratoga Selected Yearling Sale
Fasig-Tipton Photos/PhotosbyZ
1 of 1
By Bloodhorse staff UPDATED 7:46PM, AUG 11 2021

Offspring of Into Mischief continue to be in high demand, and one colt in particular by North America's two-time leading general sire caused a protracted bidding war during the second session of the Saratoga Sale on Tuesday night, that saw his price soar to $2.6 million to top the auction.

The price is a new record for Into Mischief, according to Spendthrift Farm, where the standout sire stands.

Coolmore's MV Magnier was able to secure the colt consigned by Gainesway. Fabricio Buffolo, buying on behalf of Besilu Stables, was the underbidder.

"He's a very nice horse and he's one we've been talking about for the last couple of days," Magnier said of the colt out of the 2016 Test Stakes winner Paola Queen.

Coolmore's Ashford Stud has had success with another son of Into Mischief this year in freshman stallion Practical Joke, sire of the eight-length Sanford Stakes winner Wit and currently the second-leading first-crop sire by progeny earnings.

Magnier continued: "He's by a very good sire. He's out of a very good racemare, let's hope he's as good as Practical Joke.

"He has a lot of credentials. We'll bring him back to the farm and he'll stay in America."

The bay colt is the second foal out of Paola Queen, a daughter of Flatter who produced an Into Mischief filly this year. He was bred in Kentucky by Don Alberto Corporation, which purchased Paola Queen for $1.7m from ELiTE's consignment to the 2017 Keeneland November Breeding Stock Sale.

The colt's second dam Kadira is another stakes winner in the family and his third dam Raw Gold is a Grade 2 winner and a half-sister to Grade 1 winner Point Ashley.

He was the first horse Gainesway has consigned for Don Alberto, according to Gainesway general manager Brian Graves.

He said: "We're just very grateful to Don Alberto for sending us such a nice horse. He was a physical standout when we saw him at the farm.

"He was the kind of horse that you got down on your hands and knees and said, 'Please let it be me'. We were just lucky that they let us lead him around here."

"You see two per cent of horses that you sell in a year walk like that," he said. "And they continue to walk like that, cool and calm the whole sale. When horses do that and you're out of a Grade 1 winner, and you're by the world's best stallion, you're supposed to have a chance to top the sale." 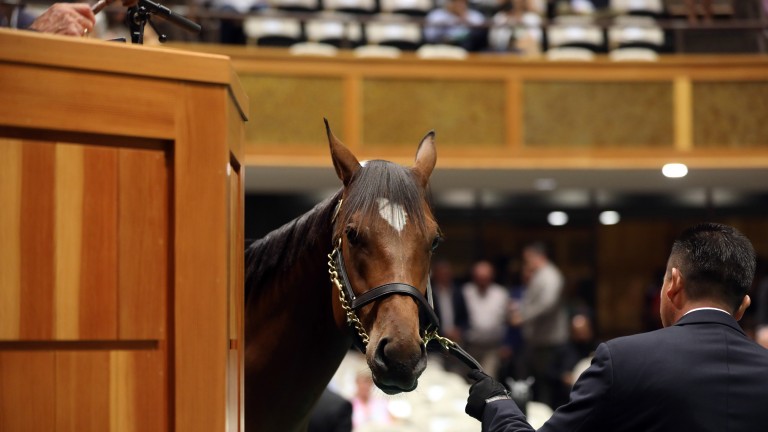 The sale-topper: 'You see two per cent of horses that you sell in a year walk like that'
Fasig-Tipton Photos/PhotosbyZ

The second-highest price of the sale was the $1.6m spent during the opening session by Jacob West, agent for Robert and Lawana Low, for an Uncle Mo colt out of Grade 1 winner Dame Dorothy consigned by Stone Farm.

Graves reflected: "It was a little spotty here on the first night. You do get to wondering as a consignor if things are going to be fair or if you're going to be in a buyers' market.

"When the quality came in tonight, they seemed to open up. I think there were better horses today."

And the Into Mischief colt that had the Coolmore team in raptures proved to be the standout of the sale.

"He jumped through all the hoops," said Graves, "the diagnostics, the heart scans, the genetic testing. He's probably going to be a good one."

Besilu Stables, which helped to drive up the sale topper's price, ended the sale without any purchases.

"The idea is just to buy a few yearlings, just a handful, five or six yearlings, to race," said Buffolo. "[The market] was strong, but it's great results for the breeders. We'll try again in September."

Magnier purchased two additional yearlings on Tuesday night. On the first, he partnered with Wesley Ward, Andrew Farm and Dr Ramon Tallaj for the Practical Joke colt consigned by Gainesway.

The $425,000 colt was bred by Forging Oaks in Kentucky out of the Rahy mare Miss Utada, also the dam of multiple Grade 2 winner Secret Gypsy. Fish Stables had previously bought the colt for $185,000 from Eaton Sales at the Keeneland November Sale.

Magnier then signed for himself a Curlin colt out of a half-sister to the late Ashford stallion and European Horse of the Year Giant's Causeway that cost $500,000. The colt was bred in Kentucky by St Elias Stables out of the Galileo mare Often and was consigned by Lane's End.

During Monday's opener, Magnier went to $300,000 for an American Pharoah half-brother to multiple Grade 3 winner Daddy Is A Legend.

The colt was consigned by Ballysax Bloodstock, agent for HnR Nothhaft Horse Racing. He was bred in Kentucky out of the Benchmark mare Randie's Legend.