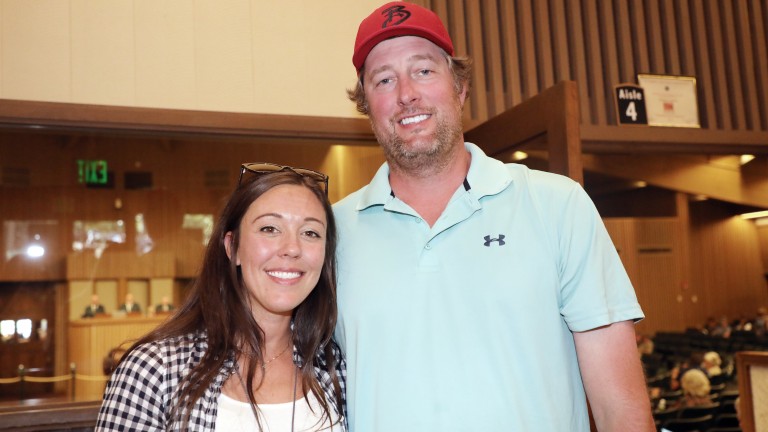 Black Type Thoroughbreds finished victoriously on Tuesday during the second day of selling from Book 4 at the Keeneland September Yearling Sale after launching a final bid at $450,000 for the Connect filly consigned as hip 2637 by Paramount Sales. The filly held strong throughout the day to be session eight's highest-priced offering.

Paramount Sales led the day after selling 25 head for gross receipts of $2,076,500, at an average price of $83,060, including the sale-topping Connect filly.

The filly was bred in Kentucky by Castleton Lyons and Kilboy Estate out of their Distorted Humor mare Fun Affair, a winner in England and a producer Stateside. The mare is out of the US champion two-year-old filly Caressing , a multiple Graded stakes winner including her first-class performance in the 2000 Breeders' Cup Juvenile Fillies, she earned $955,998 on the track.

The Honour and Glory mare produced the 2017 champion three-year-old colt, West Coast, a multiple Graded stakes performer and now a Lane's End stallion whose first crop of foals are two-year-olds this year.

"We have had luck before with Connect; I'm a big fan of the sire," Maddie Mattmiller said. "This particular filly had a lot of back pedigree on her. Her dam being out of a champion mare, she has a sire under the second dam. The filly was a queen all day showing; she carried herself well. She's a pretty filly and stood out in this book for sure, and we had to have her."

The racing entity made four purchases over the past eight days for gross receipts of $1,280,000.

"We were not expecting to go that high on her, but at the same time, you never know with a filly with her pedigree, that is as stunning on the end of a shank as her page suggests she should be…you're going to have to pay," Mattmiller said.

At the conclusion of the second day of selling from Book 4, B.E.T. had made five purchases for a gross of $750,000 to be the day's leading buyer, followed by Jebel Ali Stables, which purchased two yearlings for a gross of $570,000.

FIRST PUBLISHED 9:03AM, SEP 21 2022
With a filly with her pedigree, that is as stunning on the end of a shank as her page suggests she should be…you're going to have to pay