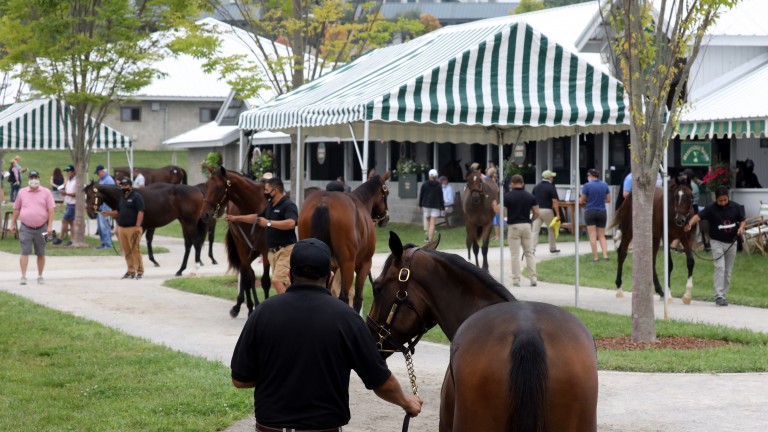 The scene at Keeneland on Sunday, day one of the September Yearling Sale
Keeneland photo/Z
1 of 1
By Michele MacDonald 8:37AM, SEP 14 2020

In most other years, the numbers generated by the opening session of the Keeneland September sale, the world’s largest yearling marketplace, would have been cause for general alarm, if not the beginning stages of panic.

For starters, more than 51 per cent of the 224 horses cataloged for Sunday’s session were withdrawn or listed as RNAs (reserve not attained).

The 109 yearlings reported sold, which included at least one that was apparently a buyback, yielded a gross of $40.68 million, down 19.8 per cent from the same session in 2019 when post-sale transactions are included and down 12 per cent without considering those additional sales. Average price declined 13.6 per cent to $373,211.

Yet despite these daunting figures, Keeneland officials were celebrating what president-elect Shannon Arvin described as a “good day overall” considering the long shadows of the coronavirus pandemic.

Although neither Arvin nor director of sales operations Geoffrey Russell answered directly when asked how the results compared with their pre-sale forecasting, both expressed gratitude that the sale could even be held in light of Kentucky restrictions on public events aimed at curbing the coronavirus.

“Just to have a sale met our expectations,” Russell declared. “The resiliency of this industry is unbelievable. For what everyone has been through, we appreciate all the buyers who are here and we wish them all success.”

Many adaptations were required due to the virus, with Keeneland offering Internet and telephone bidding and reporting that five horses were sold online, with four of those to international buyers.

Even more than has been the case in recent years, buyers and sellers reported extreme selectivity, with horses who have perceived flaws being harshly downgraded - thus sometimes spurring consignors to withdraw them - and those that are the most desirable drawing broad interest.

Five horses - four fillies and a colt - drew bids of at least $1 million, compared with seven at that level during the opening session in 2019, including a pair bought by Godolphin for more than $2 million each. Neither Godolphin nor Shadwell bought any yearlings on Sunday, contrasted with their combined spending of $8.31m for eight colts and fillies in the initial session last year.

Yet even without the Maktoums, four of the opening session’s elite yearlings featured an international angle to the buyer or seller, underscoring the significance of the Keeneland auction globally. Approximately 20 per cent of the 448 yearlings catalogued for the two Book 1 sessions were bred, owned or otherwise closely connected to international entities. 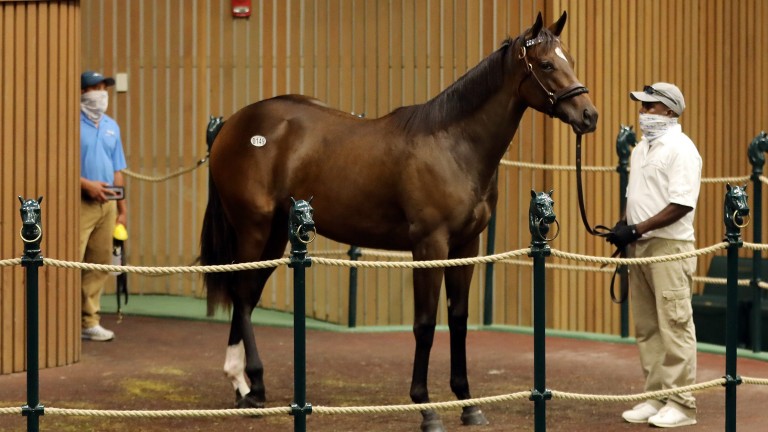 The Tapit filly out of Embellish The Lace who sold for $1.25m
Keeneland photo/Z
Leading the way in the opening session was a $1.25m bay filly by Tapit out of Grade 1 winner Embellish The Lace, by Super Saver, who was acquired on a bid by Claiborne Farm’s bloodstock manager Bernie Sams for an undisclosed farm client aiming to build a future broodmare band.

China Horse Club, which paid $2.4m for Embellisht The Lace at Fasig-Tipton in 2016, bred the Tapit filly. She was consigned by Bluewater Sales as hip 149.

“Anytime you get that amount of money, you have to be very happy. It’s a lot of dough and we’re in a lucky position to breed such a nice filly and offer her here,” said Michael Wallace, China Horse Club’s chief operating officer, who also plans to buy some yearlings.

Despite the overall market pitfalls, Wallace observed that “selling horses like [the Tapit filly] isn’t too much of a challenge. She far exceeded what we were asking for her. The challenge is for the horses that aren’t quite hitting all the marks - that’s where this market is a little bit tough. It’s expected, it’s the way of the world. We’re not immune.

“It’s just a matter of keeping some confidence in the market and confidence in your product and in the industry long-term, which I do have,” he continued. “So, you can’t look at it too much in a micro view. We take a very macro view on the whole thing and this will pass and normality will resume.”

For some buyers, the turbulent market offered opportunities, even if their hopes were quashed for simultaneously trying to sell yearlings.

Mandy Pope of Whisper Hill Farm withdrew three Tapit yearlings produced by some of her expensive mares, including champions Havre de Grace and Groupie Doll, from Sunday’s session. She also withdrew the first foal, by Arrogate, of her $9.5m champion Songbird who had been cataloged for Monday’s second sale session.

Nonetheless, Pope prevailed in prolonged bidding to secure a Medaglia D’Oro filly who is a half-sister to outstanding young sire Constitution for $1.1m. The filly was bred in partnership by Bridlewood Farm and Don Alberto Corp. and consigned by Denali Stud as hip 58.

“We’re not looking for a collector’s item, though,” he said. “We’re looking for a racehorse first, and she obviously has great broodmare potential, so she checks all of the boxes for us. She was very athletic with a super, super shoulder, like the Medaglias have, and enough hip that we were just very happy to have her, first as a runner and then as a broodmare.” 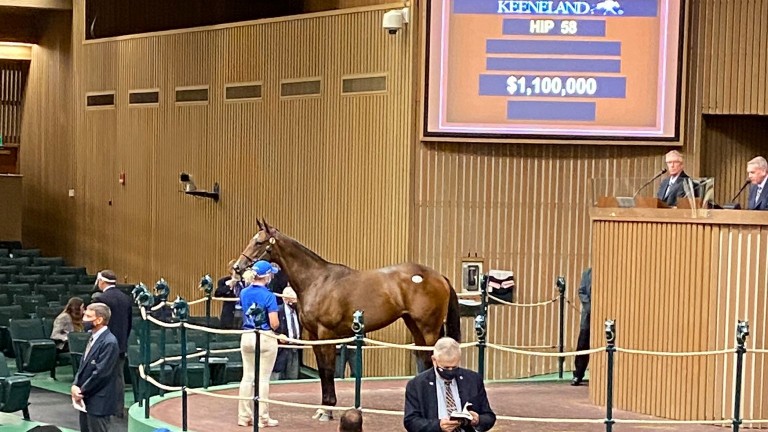 The Medaglia d’Oro filly who is a half-sister to outstanding young sire Constitution was bought by Mandy Pope for $1,1m
The session’s third highest-priced yearling was a full-sister to European juvenile champion and young Coolmore sire Air Force Blue, sold by breeder and consignor Stone Farm for $1.05m. Agent Mike Ryan, who signed the ticket on behalf of an undisclosed buyer, said the dark bay War Front filly would likely be sent to Europe for racing.

“Being a full-sister to champion Air Force Blue you’d have to think she’d love the turf, but she looked to me like something that could run in the States on the dirt,” said Ryan. “She’s going to start off in Europe and hopefully we can do some good over there and bring her back over here later in her career.

“I knew [the price] was going to be seven figures or thereabouts. She’s got a lot of residual value. I thought she was an exceptional physical when I saw her at Stone Farm about three weeks ago and she’s improved since then.”

Ryan ended the session as second leading buyer with seven purchases for various clients for a total of $3.23m. His acquisitions included an $800,000 Curlin colt who is the full-brother of 2017 champion juvenile Good Magic, and Ryan said the yearling will go to Bob Edwards’ e5 Thoroughbred Racing, which campaigned Good Magic with breeder Stonestreet Farm.

“They are very alike - this horse is just a little bigger and a little stronger and deeper,” Ryan said of the yearling compared to Good Magic, who he purchased for $1m at this venue in 2016. “They have the same demeanor. Good Magic had a great personality, he was a very focused horse, very professional, and this guy is the same way. If he is half as good, we’ll be delighted.” 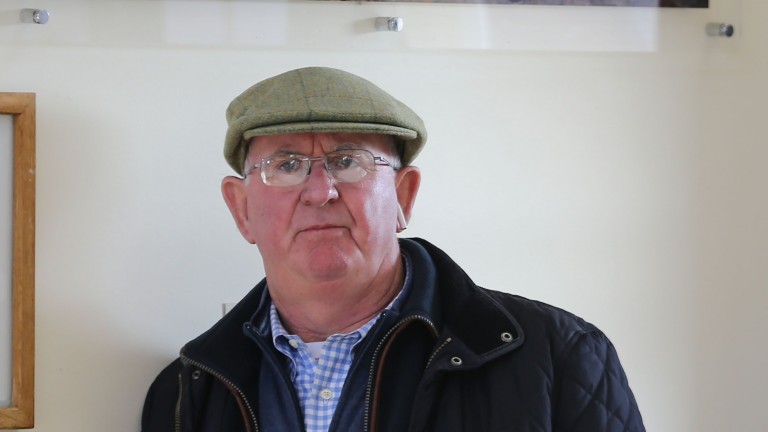 Mike Ryan: ended the session as second leading buyer with seven purchases for various clients for a total of $3.23m
Laura Green
Rounding out the session’s quintet of seven-figure yearlings was a $1m Quality Road filly acquired by agent Donato Lanni for Charles Chu, a businessman active in China as well as America, and a $1m Into Mischief colt from the family of Oaks d’Italia winner Menhoubah purchased by Larry Best of OXO Equine.

Best also bought a $525,000 Into Mischief filly who is a half sister to 2019 American champion sprinter Mitole. He noted that he continues to expand his interests in breeding, having just retired to stud his Grade 2 winner Instagrand, a $1.2m auction purchase by Into Mischief who will stand at Taylor Made Farm.

“I’m a big fan of Into Mischief,” said Best. “I think he is probably one of the best sires ever.”

Lanni, who works closely with trainer Bob Baffert and who helped select Kentucky Derby winner Authentic at this auction in 2018, ranked as leading buyer. He purchased eight yearling colts for the partnership of Starlight Racing, SF Bloodstock and Madaket Stables for $4.17m in addition to the Quality Road filly for Chu.

Yearlings secured by Lanni for the partnership include three sons of Quality Road and one each by Into Mischief, Curlin, Uncle Mo, Medaglia D’Oro and Candy Ride.

Last week, the same partners and Lanni took home eight colts from the Fasig-Tipton Selected Yearling Showcase for a total of $3.29m, with that group topped by a pair of sons of Into Mischief.

Meanwhile, on the other side of the ledger, yearlings withdrawn or RNA’d from the session included several bred by Coolmore partnerships, such as Hip 114, a colt by War Front out of Group 3 winner Coolmore, a full-sister to Gleneagles, who was scratched.

Hip 130, a Kitten’s Joy filly bred by the Niarchos family’s Flaxman Holdings out of Irish and American stakes-placed Absolute Crackers, by Giant’s Causeway, was reported sold for $130,000. However, the buyer was listed as Flaxman Stables Ireland, so the filly was apparently a buyback.

FIRST PUBLISHED 8:37AM, SEP 14 2020
Neither Godolphin nor Shadwell bought anything, contrasted with their combined spending of $8.31m for eight colts and fillies on 2019's opening day