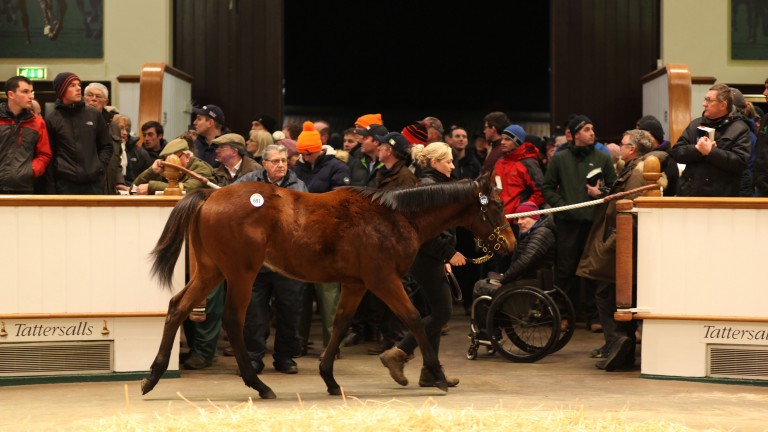 The packed Park Paddocks gangway as a weanling makes its away around the ring at the Tattersalls December Foal Sale
Laura Green
1 of 1
By James Thomas, Sales correspondent UPDATED 2:08PM, NOV 23 2021

Precious stones such as diamonds and rubies do not come out of the ground packaged in velvet, with a lifetime warranty and a hefty price tag. First they must be mined, processed, sorted, cut, polished and distributed before their value begins to approach its peak. And, in many respects, much the same is true of the thoroughbred.

On Monday, at least until next year, we waved goodbye to the European yearling sales season, the equine equivalent of the diamond exchange where the cut and polished end product transfers into the hands of adoring owners. Or, on some rare occasions, those who end up wishing they had kept the receipt.

On Wednesday the bloodstock industry will turn its attention to the Tattersalls December Foal Sale, a much earlier stage of the process where the end product appears in its rawest form.

There is no doubt that some of the best-bred members of the next generation of racing talent are currently stabled in the famous Park Paddocks complex. But, for the time being, their age is measured in months rather than years, and their latent athletic prowess remains hidden beneath a fluffy winter coat and a starry eyed outlook.

The clues are all there in the weighty catalogue, though. Three Dubawis, five Frankels, two by Kingman and 14 by Sea The Stars. Prior to withdrawals there were siblings to 128 stakes winners, while 87 of the foals on offer are out of black type-winning mares.

If that isn't enough, there is the small matter of the auction's track record. A significant amount of future Group 1 winners have changed hands at the December Foal Sale, think names such as Authorized, Blue Point, Dutch Art, Fame And Glory, Magna Grecia, Saffron Beach and the latest star, Cox Plate hero State Of Rest, who was signed for by the aptly named Diamond Bloodstock at 45,000gns in 2018.

As this roll of honour attests, the December Foal Sale attracts a broad cross section of end users and pinhookers, the prospectors of thoroughbred business who aim to buy low and sell high.

Among those hoping to turn foal sale base metal into pure yearling gold is Philipp Stauffenberg, who has garnered a reputation as a fearless pinhooker well capable of transforming an expensively bought foal into a blue chip yearling. 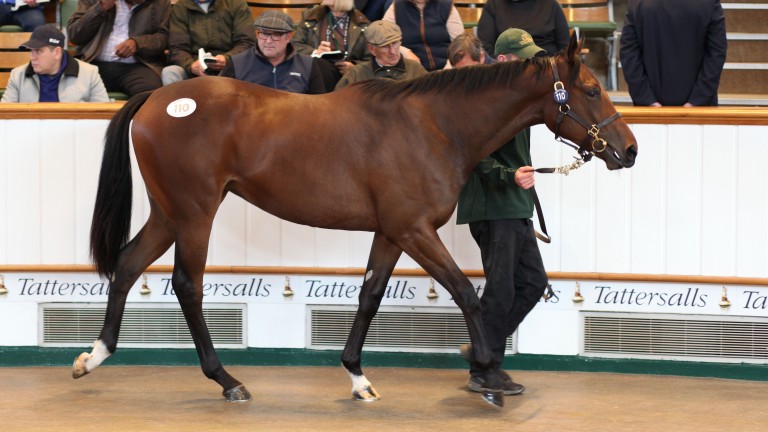 The No Nay Never sister to Arizona sold by Stauffenberg Bloodstock to Cheveley Park Stud for 825,000gns
Laura Green

Stauffenberg will be looking to reinvest after landing his biggest ever touch at this year's Book 1, where a No Nay Never sister to Arizona picked up for €260,000 was resold to Cheveley Park Stud at 825,000gns. Given the strength of the market at last week's Goffs November Foal Sale, he expects competition to be fierce.

"It's a very important sale as it's where we restock for the pinhooking syndicate," says Stauffenberg. "The foal sale at Goffs was enormously strong; I bought four but I underbid nine more, and that was stretching beyond the level I thought I could buy these foals for too. I will try to buy a few more here and see where we can get some value."

Pinhookers cannot afford to pay yearling prices for their foals, unless they want to kiss their profit margin goodbye, and, with the market on something of a bull run, that may be easier said than done.

"The value lies in the purchase," continues Stauffenberg. "So if you have to pay too much for them as foals then it limits the return. It looks like it will be a strong sale here and everyone tells me they're very busy, so that will make it tough to buy. 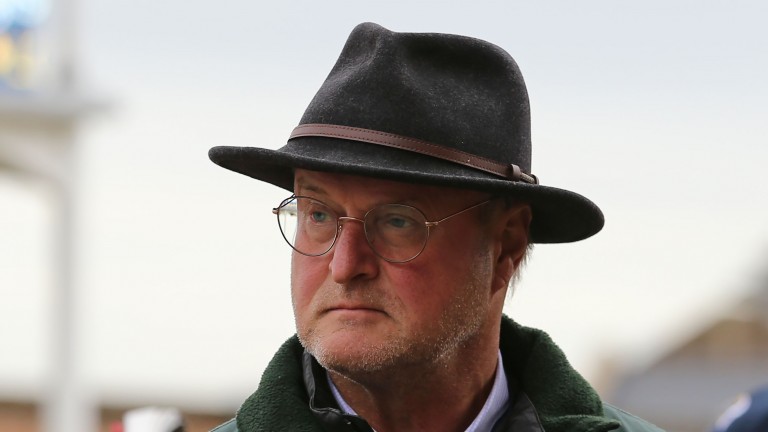 Philipp Stauffenberg: "I would not say that I'm afraid to buy one of the top-end foals"
Laura Green

"It's a very nervy time as you try to get it right and you want to buy a good foal with some upside. I try to buy foals for Books 1 and 2, Goffs Orby and the Arqana August Sale, and obviously you have to be a bit of a standout to get into those sales."

While there was an unmistakable strength to results at the yearling sales, the top end of the market appeared to undergo something of a correction as blockbuster prices proved to be in shorter supply than in previous years. This is clearly a healthier situation than the polarised state of affairs that came before, but Stauffenberg says this potentially makes those pinhooking home runs harder to hit.

"If you look into the yearling sales, the top end has weakened a little and the middle market has got stronger, so when you are spending on a high-end foal you have to be even more careful than five or six years ago," he notes. "I try to be careful with what I'm spending but you quite often land on the same foal as your competitors. Then it's just a question of who's the bravest!

"At the end of the day, you have to be convinced that what you buy at the price you pay is really worth going for. I would not say that I'm afraid to buy one of the top-end foals, but there has to be value for me in doing so. Whether that's the case or not, we won't know until next year." 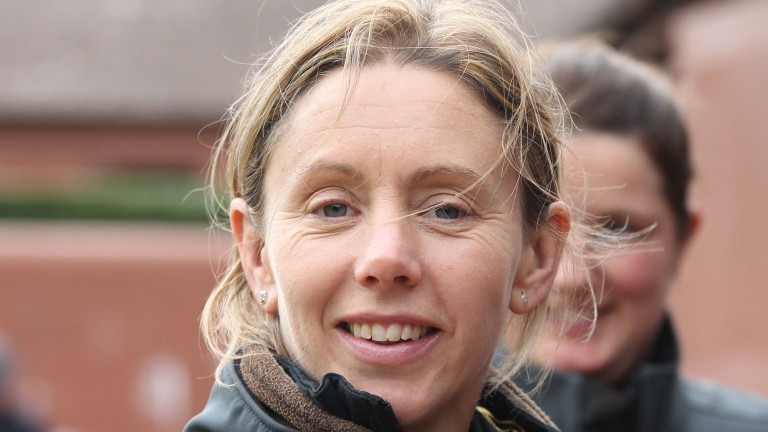 Jenny Norris: "This industry is just so resilient"
Laura Green

Among those hoping that Stauffenberg and his fellow purchasers are feeling full of courage is Jenny Norris of Norris Bloodstock, who offers a 13-strong draft of foals out of barn M in Highflyer Paddock. The consignment contains foals by first-crop sires such as Masar, Land Force and Phoenix Of Spain, up-and-comers Time Test and New Bay, and established stars Dubawi and Invincible Spirit.

Norris been buoyed by the strength of trade witnessed this year, and also by the fact there is even a foal crop to sell in 2021, given these youngsters were conceived as the Covid-19 pandemic turned the world on its head.

"There are plenty of years where things don't go right but this industry is just so resilient," she says. "These foals were obviously bred last year and everybody still put their money where their mouth is and reinvested.

"It's great for the breeders that people are still hungry for horses and keen to have a go. I love the way it's filtered down as there's been a real depth to the demand this year.

"There have been so many fabulous stories this year of guys buying cheap foals for four or five grand and getting really good touches. It's so nice to see the smaller guys, those who are taking a punt and giving it a go, getting life-changing amounts in return." 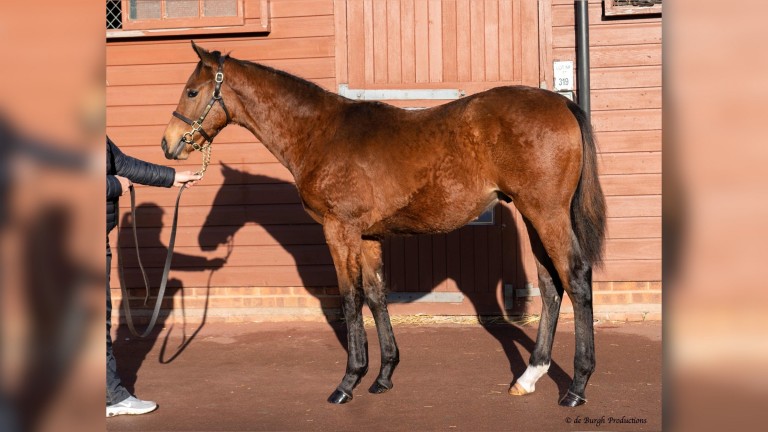 However, Norris knows that Lot 943 will prove well beyond the reach of the four- or five-grand buyer. As a Dubawi half-brother to Group 2 winner and Group 1-placed Tropbeau, the Lord Margadale-bred colt rates one of the catalogue's standouts.

"It's hard with those top-class, very well-bred foals as you are pitching to a select number of buyers, and they've got to have everything right," says the consignor. "But he's got real class about him, he's very much like the stallion, and if you can't get excited about having a Dubawi foal then you might as well give up."

Who knows what gems will be unearthed at this year's foal sale, or whether we will be talking about them at next year's yearling auctions, once they reach the racetrack or beyond.

But there is only one way to find out. Let the hunt begin.

FIRST PUBLISHED 1:00PM, NOV 23 2021
If you can't get excited about having a Dubawi foal then you might as well give up