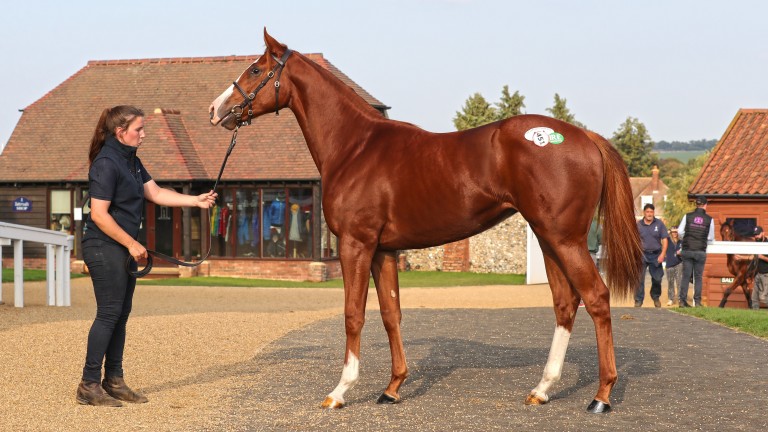 Zain Claudette will have her date with destiny when lining up in the Group 1 Juddmonte Cheveley Park Stakes on Saturday, and a big few days for the family began yesterday when her Exceed And Excel half-sister topped the Tattersalls Ireland September Yearling Sale at £200,000.

An opening play of £50,000 was followed by some determined bidding from the likes of Barry Lynch and Ted Durcan, but ultimately Zain Claudette's trainer Ismail Mohammed had too much firepower and brought the gavel down from his position at the top of the bidders' area.

"I came here only for her," said Mohammed. "I was on the phone to the owner [Saeed Al Tayer] and he was very keen to have her so I hope she will turn out the same as her half-sister. There are a few similarities between the two fillies but I think this filly will grow more than Zain Claudette."

He continued: "Before the sale I was thinking around £100,000 but when I called the owner he said she would be more. The sister has already won a Group 2 and Group 3 and if she wins a Group 1 this filly will be worth a lot more. We've actually been following her and when we saw her in the book we spoke to her owner about buying her [privately] but he said we would have to buy her at the sales."

On Zain Claudette, who cost Rabbah Bloodstock £20,000 at the Goffs UK Premier Sale before landing the Princess Margaret and Lowther Stakes, Mohammed said: "She's in good form. She's been super in all the work we have done with her and with every race she's improving.

"I'm very excited about taking her to a Group 1. She was stronger and better than ever in her last piece of work." 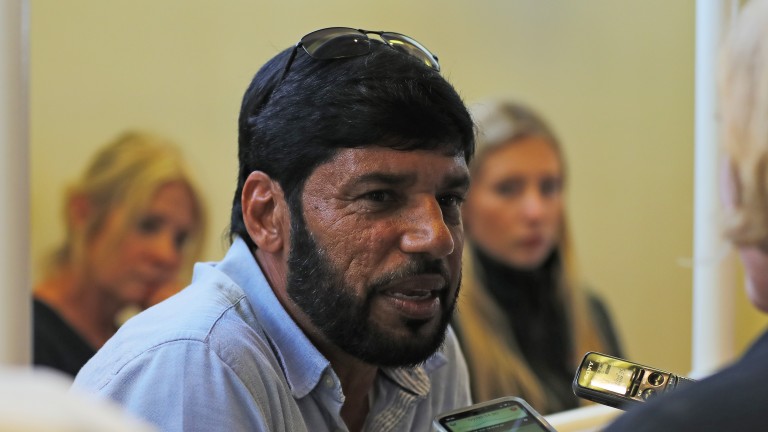 Ismail Mohammed: "I came here only for her"
Debbie Burt

The youngster was consigned by Castlehyde Stud and bred Ukranian breeder Andriy Milovanov, who was in Newmarket with his family to see the filly change hands.

Speaking through a translator, Milovanov said: "I'm very happy and hope that her trainer will make her a future champion. There was a temptation to keep this filly, we would have raced her ourselves, but it depended on how much money she made today.

"I have 16 mares, who stay at Coolmore and the Irish National Stud, and Claudette has been covered by Ten Sovereigns. Maybe next year I'll send her to Zain Claudette's sire No Nay Never again."

Despite being in Newmarket to see his Exceed And Excel filly top the September Sale, Milovanov will not be staying around to see Zain Claudette line up in the Cheveley Park Stakes, as he explained: "I'm actually the president of the Ukrainian Equestrian Federation so I have to watch our young showjumping horses in Belgium tomorrow."

A member of Smooth Daddy's debut crop proved the early highlight as a striking colt from Kildallan Farm brought a winning bid of £120,000. Dwayne Woods and Charlie Johnston clashed over the youngster, with the latter winning out with the decisive bid struck from the Park Paddocks gangway.

"He's a cracking individual," said Johnston. "Obviously he cost a lot more than I thought he'd make but he's a real standout. He had a great walk on him and although he's not over big, he's very strong and very active."

The youngster is the first foal out of the unraced Silesie, a daughter of Magician from the family of Air Force Blue, and was bred by Christopher Johnston Bloodstock when Smooth Daddy was in his first season at Micheál Orlandi's Starfield Stud at a fee of €5,000. 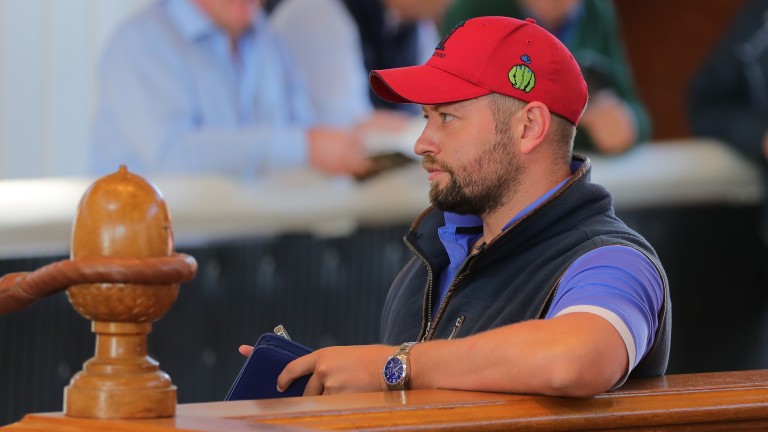 Charlie Johnston: "This is a sale that's quite close to my heart"
Debbie Burt

"This is the first yearling I've seen by Smooth Daddy but Micheál used to work for us many moons ago so I know him well and it's a great start for his stallion," said Johnston, whose previous September Yearling Sale purchases include Rose Of Kildare, the three-time Group 3 winner who cost just €3,000.

He continued: "This is a sale that's quite close to my heart through Rose Of Kildare, although this horse cost a hell of lot more than she did! Let's hope he's as successful. We're always looking to increase the quality of yearlings we buy but we'll still be buying those at the lower level.

"This is just the start of a big three or four weeks of sales and hopefully we'll get plenty bought." 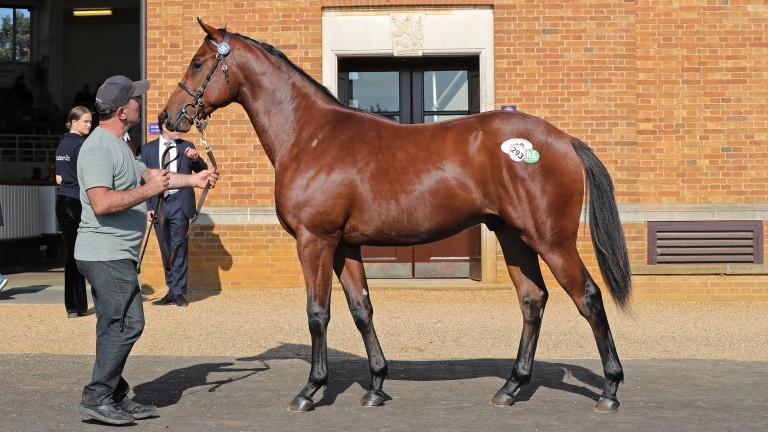 Dermot Kilmartin of Kildallan Farm was tasked with preparing the colt, who also appeared at last year's foal sales when knocked down to Ballyphilip Stud at €22,000. The consignor said: "I can't believe it to be honest, I'm having to pinch myself. He's been very straightforward since the day he came in for prep.

"He's been very busy over the last couple of days and fair play to Mr Johnston and Mr Woods as they both loved him from the minute they saw him. We knew early on that he was popular but we didn't think he'd make that kind of money. It's a great advertisement for Micheál Orlandi as well as he's at every sale driving on so it's terrific for him."

Orlandi, who also stands Cappella Sansevero, Far Above, Galileo Chrome, Kuroshio and My Dream Boat at his Mullingar farm, added: "It's a huge result and great for the stallion and all the people who've used him in the last three years. 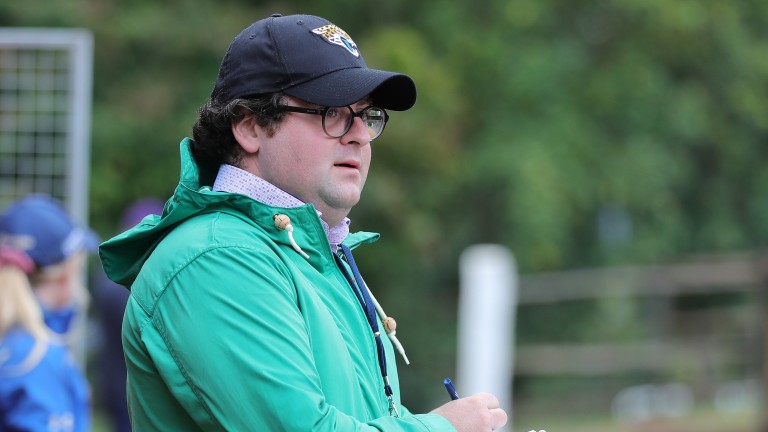 Micheál Orlandi: "They're all being bought by good judges"
Debbie Burt

"There aren't a huge amount of them around so there aren't loads in the sales but they're all being bought by good judges; Robson Aguiar bought a filly by Smooth Daddy at Doncaster and Con Marnane bought one of his colts here yesterday.

"The reality is people struggled to get them into sales, the sales companies weren't that keen on them, which is a pity, but the nice ones got in and have done well and I'm over the moon with today's result."

George Scott and Billy Jackson-Stops secured the sixth and final six-figure lot of the sale when they went to £105,000 for the Mehmas colt out of Drifting Spirit consigned by Tally-Ho Stud.

"He's been bought for an owner who's had horses in the yard before and is absolutely desperate to get to Royal Ascot," said Scott. "We thought this colt was the best physical of the day, and obviously the stallion needs no introduction.

"He came highly recommended by Tally-Ho and he should be the kind of horse who does what it says on the tin. He's a strong, forward type so he should be one to get on with in the spring and hopefully he can end up at Royal Ascot."

With strong trade across the two days plenty of vendors left Park Paddocks with a spring in their step. However, few were as jubilant as Mark Dreeling of Coole House Farm.

The family-run operation sold two lots at the relocated auction, with the sale of a £90,000 Fast Company colt to JD Moore and Ed Dunlop on Tuesday followed by a £95,000 Footstepsinthesand colt who went the way of Ed Sackville.

"The last 24 hours have been phenomenal for us, the best two days of my life in this industry!" said Dreeling. "We're huge fans of Footstepsinthesand; we bred Larchmont Lad, Lexington Fury and Golden Shoe so he's been so good to us. We've supported him since his first year."

The colt is the first foal out of Caped Lady, a Cape Cross half-sister to Group 2 Criterium de Maisons-Laffitte scorer Captain Marvelous who joined the Coole House Farm broodmare band at a cost of €20,000.

Dreeling reported the mare had an "incredible" Bated Breath colt foal and is in foal to Ten Sovereigns.

He added that this week's sale had been a welcome tonic after a trying time for the family, saying: "It's been a hard year for [wife] Barbara and myself as we've both had health issues. It's been rough but we're here and the focus was to get these two to the sales and for me to be well enough to be with them.

"My daughter Megan is here with the horses and my other daughter, Julia, is home as she runs the office and takes care of all the administration. Julia and I go through the stallions and she sorts the mating plans with me, she's fundamental to what we do."

Dreeling also paid tribute to Tattersalls Ireland, in particular the company's chief executive Simon Kerins. He said: "Tattersalls have been unbelievable to us. We're only small breeders but down through the years Simon Kerins in particular has gone above and beyond to try and help us and encourage us to keep supporting this sale. When we started it was just a one-day sale but Simon has built it up to what it is now."

Of his purchase, Sackville said: "He was bought for MV Magnier. He's a lovely horse and obviously they stand the stallion. Footstepsinthesand has been a consistent and reliable source of talent and every year he gets a good one. I'm unsure who will train this horse but I'm sure they will make a decision in the coming weeks."

Two lots by Starspangledbanner fetched £85,000 apiece, with the first of the brace, the colt out of Divert, knocked down to Tom Goff of Blandford Bloodstock. The Castlebridge Consignment-offered youngster is out of a half-sister to St Hugh's Stakes winner Orlaith, while Toormore and Estidhkaar also appear further back on the page.

"The pedigree speaks for itself and he's a lovely, mature, sharp-looking colt," said Goff. "He's full of class and quality and looks like a real sprinter. He'll stay in Newmarket is all I can say about plans at this stage."

On the action over the two days, Goff added: "I think it's been very, very good trade for the nice horses. You have to pay for anything you really want, which is the same at most sales. The figures have held up very well and we're almost back to post-Covid levels."

Ross Doyle of Peter and Ross Doyle Bloodstock was the leading spender at the auction, with 16 yearlings secured for an outlay of £834,000. The haul included the £85,000 Starspangledbanner filly out of Divert offered by Ballyvolane Stud.

Doyle said: "She's a very racy filly. Richard [Hannon] saw her this afternoon and said she was one of the best fillies he's seen for a long time so we're very glad to get her."

The filly was bred in partnership by David Powell and Carrigbeg Stud, whose Stephanie von Schilcher said: "She's absolutely lovely and is the spitting image of her mother. We sold the mare as a foal but bought her back out of training. We bred the granddam and we also have two sisters to this filly's dam. We've done quite well with them too so we are very happy. Divert is in foal to Kodi Bear this year."

FIRST PUBLISHED 1:19PM, SEP 22 2021
We knew early on that he was popular but we didn't think he'd make that kind of money