'I thought she was the best here' - A$1.95m I Am Invincible filly shines bright 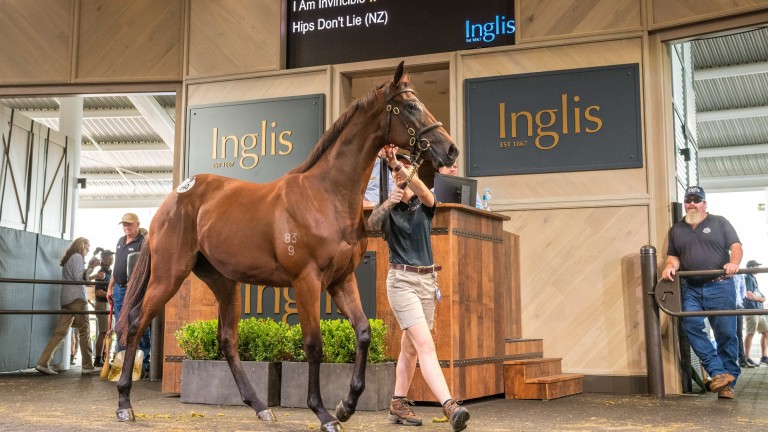 The Coolmore-consigned I Am Invincible filly sells to Sheamus Mills for A$1.95m at the Inglis Easter Sale
Inglis
1 of 1
By Tim Rowe of ANZ Bloodstock News 2:22PM, APR 7 2021

The final select yearling sale of the season, the Inglis Australian Easter Yearling Sale, has rounded out a remarkable surge in demand for bloodstock from buyers in 2021, with the highest-priced filly ever sold by I Am Invincible changing hands for A$1.95 million (£1.08m) on a record-breaking second day at Riverside Stables in Sydney.

There were 11 million-dollar lots sold on day one and another 11 reached the seven-figure mark on Wednesday, with the 22 lots comprising 15 colts and seven fillies. Those results helped Inglis better the record gross figure on a single day of trade at a sale in the southern hemisphere, which it set on Tuesday.

The leading buyer was Tony Fung, who bought eight yearlings for A$7.02m, but the spread of buyers was diverse, with Hawkes Racing (eight lots for A$5.4m) and Tom Magnier (five for A$5.1m) spending big, while Gai Waterhouse and Adrian Bott and Kestrel Thoroughbreds took home 11 yearlings, the most of any individual entity, for A$3.31m.

Arguably it is Inglis’ best Easter Sale since 2008 when Bob Ingham, Sheikh Mohammed, Nathan Tinkler and Shadwell’s Angus Gold spent A$50m between them in a colossal spend which preceded the looming global financial crisis.

"We wanted to try and put together what was fair and effectively a lucrative market for vendors and buyers to operate in and it’s hard to escape the conclusion at the end of the sale that that has happened. It feels very healthy," Inglis general manager of bloodstock sales and marketing Sebastian Hutch said.

"Demand for stock at stages through the past two days has been effectively insatiable, I think it’s a reason for a lot of vendors to leave here very happy indeed.

“Buyers seem delighted. The variety of buyers involved is very positive. It's one of the major positives of the sale. It’s hard to be anything other than delighted."

At the four Australian select yearling sales held this year - the Magic Millions on the Gold Coast, Inglis’ Classic, Premier and Easter sales - more than A$461m has been spent. This compares to just over A$395m spent at the same sales in 2019.

The highest-priced yearling sold on day two of the Easter Sale, a filly who is from “one of the best families in the stud book” and a half-sister to a string of valuable stakes-performed horses, was bought by Melbourne-based agent Sheamus Mills.

Day two’s top lot, the Coolmore-consigned I Am Invincible filly, is the eighth foal out of Hips Don’t Lie, a winner of three stakes races at two, and the fourth yearling out of the mare to make seven figures. The mare was bought by Colm Santry Bloodstock at the 2009 Magic Millions Gold Coast National Broodmare Sale for A$770,000.

WOW! TOP LOT OF DAY 2 - @CoolmoreAus I Am Invincible x Hips Don’t Lie filly (Lot 340), selling to @SMBloodstock for $1.95m and we can see why! Congrats to all involved in this huge result #InglisEaster pic.twitter.com/A6EMDiigZM

Since then, she has gone on to produce stakes winners Ennis Hill and Lake Geneva, the stakes-placed Memphis Rock and this season’s Inglis Nursery- winning colt Acrobat, a one-time favourite for the Golden Slipper prior to injury which curtailed his autumn preparation.

Mills bought the filly for Heath Newton and Anthony Roberts who, along with the agent, race this season’s Mick Price and Mick Kent Jr-trained Thousand Guineas winner Odeum. The pair will also train this filly.

“I'm shaking like a leaf, to be honest, but we really, really wanted her,” Mills said in the aftermath of the enthralling bidding duel.

Golden Slipper-winning trainers Michael and Richard Freedman were the underbidders and it wouldn’t have taken much more for Mills to relent.

“I think it's the best family in the stud book and I think many people would still rate Acrobat as the best two-year-old we saw,” said Mills, who also went to A$1.5m for a Written Tycoon filly now named Queen Of The Green at the 2020 Magic Millions Gold Coast Sale for the same connections.

“Obviously, we're hoping he will get back to the races and, family wise, it’s as deep as it gets. She’s by the best stallion here who gets unbelievable fillies and, as I say, she’s a long-term prospect.

“You have to put some value on these things because they can breed for you. She’s not going to end up as a gelding. When we are selling foals two, three, four and five out of her, hopefully the dollars will make some sense.”

An emotional James Bester, who bred the filly with his wife Bridget, said: “Oh wow, I’ve cried for losing horses before but never for selling one for A$2 million [A$1.95m].

“I bought her mother for NZ$200,000 in New Zealand in the sale ring [as a yearling] and she’s just been an absolute gold mine and an absolutely wonderful broodmare.”

Bester, understandably, was glowing in his appraisal of the star filly, labelling her “the best yearling filly I have seen in ten years”.

I Am Invincible was the leading sire by aggregate, with 41 yearlings changing hands for a total of A$25.235m at an average of A$615,488. He also had eight million dollar lots sell over the two days, five of them fillies.

“We got two of them [I Am Invincible fillies] for the same ownership up at the Gold Coast. I didn’t have to pay that sort of money [A$1.95m], but the market has reacted to [their success],” Mills said.

“Perhaps early in the season they were selling at good value and it certainly looks like it now. He seems to be the stallion of the sale and on my shortlist of what ended up to be about 14 fillies, I think there were about six I Am Invincibles on it.”