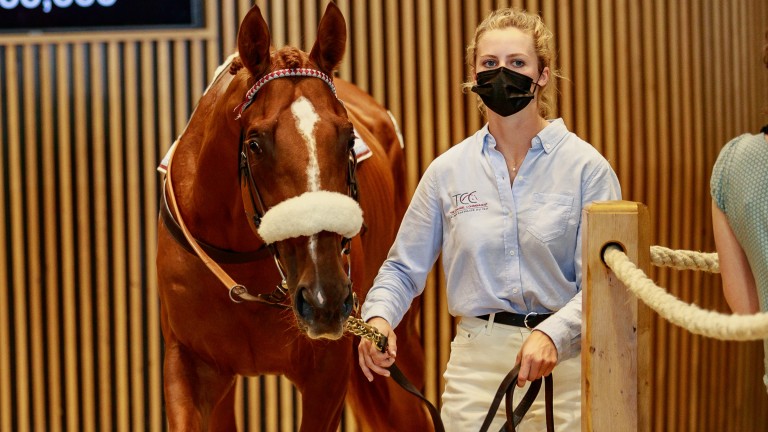 With Mondialiste and Lord Glitters, David O'Meara has already struck gold twice at this Summer sale and the trainer was back hunting for Group-class stars of the future on Thursday.

He was pushed to €400,000 to secure Juan De Montalban (lot 488), a son of Lope De Vega presented by the Channel Consignment.

His most recent performance was to run second in the Derby Italiano at the Capannelle when in the care of Robert Biondi, having enjoyed a progressive start to his career with Andrew Balding which included a win in the often-informative three-year-old handicap run at Sandown's bet365 meeting in April, a race won in 2015 by Jack Hobbs.

Hailing from a longstanding Wildenstein family, Juan De Montalban is out of the Listed-placed Samum mare Abilene, whose half-sister Akatea was second to Ervedya in the Group 1 Prix du Moulin. 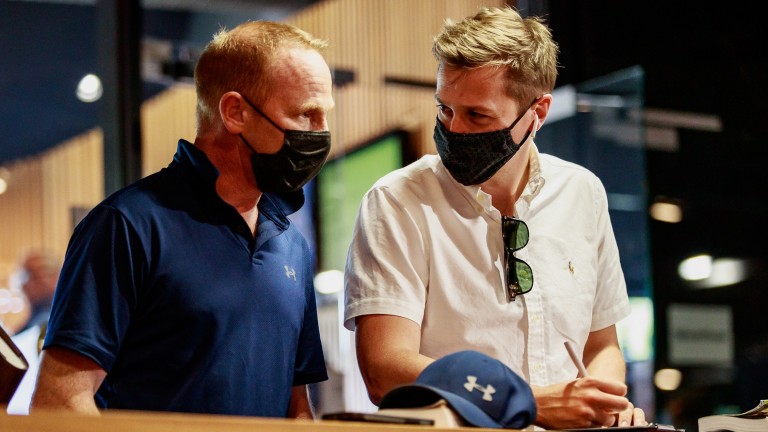 Standing with key ally Jason Kelly, O'Meara said: "He's going to be owned by Sheikh Abdullah [Almalek Alsabah], who has been a good owner of mine for a few years. He wanted a horse to run in black-type races, in Group races. I think this fella will suit him.

"I just thought he was a very, very good individual and he's only going to get better. He's only a young horse and he's got a big future."

The Channel Consignment's Alban Chevalier du Fau was also able to congratulate Willie Mullins after Ireland's champion trainer saw off some familiar competition to land Parmenion (lot 490), a gelded son of Soldier Hollow who won his only start to date over a mile and three furlongs for Edouard de Montfort. 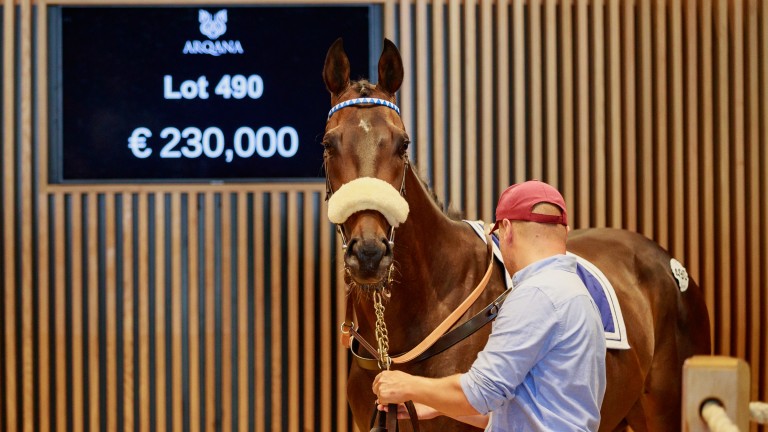 Mullins' trusted French talent scout Pierre Boulard signed for Parmenion and said: "He's very well-bred and he's by Soldier Hollow. We had luck with him with Arctic Fire and Saldier. He's a very good looking horse and he won in a good style, showing a lot of stamina. I couldn't really find anything against him."

Mullins is eying a future on the Flat as well as over obstacles for his new acquisition.

"When I saw him I never dreamed we would be able to buy him so I'm pleasantly surprised to get him," he said. "He looks the type of horse I want to go jumping with but he'll be dual purpose. We've been very lucky with the sire."

Vorda was crowned Europe's champion two-year-old filly at the end of a 2013 campaign which featured victories in the Prix Robert Papin and the Cheveley Park Stakes, while the daughter of Orpen also went down to a narrow Prix Morny defeat to No Nay Never.

Al Shahania also raced her Teofilo daughter Saiga (lot 356b), who was retired unbeaten last spring and was offered here in foal to Le Havre.

The second of her two career successes came in the Listed Prix Caravelle and the combination of page and performance made her one of the highlights from the breeding section of the catalogue.

Her career as a broodmare will now evolve within the Coolmore orbit after Robert Nataf struck at €190,000 for Saiga, the second product out of Vorda. 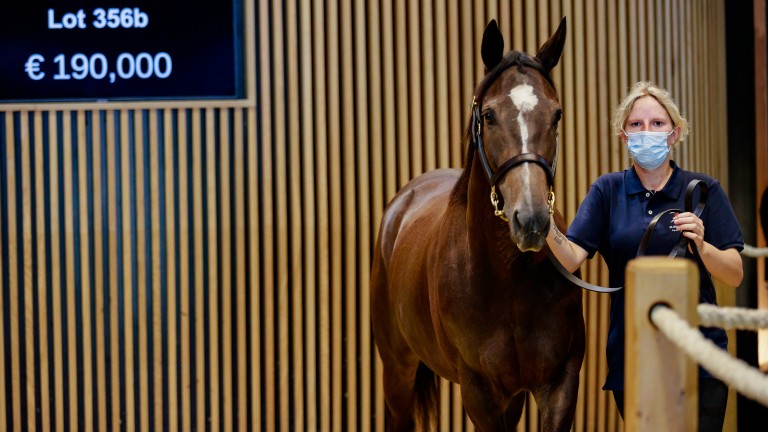 A daughter of European Champion two-year-old Vorda, Saiga is carrying to Le Havre and was sold to join the Castlehyde Stud broodmare band at Arqana on Thursday
Zuzanna LUPA

"She has been bought to develop the broodmare band at Castlehyde Stud," said Nataf. "With this pedigree and being in foal to Le Havre, she was exactly the mare they were looking for."

Second dam Velda was sold privately to Shadai Farm in Japan and her Deep Impact son Prognosis has made a fine start to his career, winning twice and adding more black type to the family when finishing third to future Derby winner Shahryar in the Grade 3 Mainichi Hai.

Nette Rousse (lot 338)was another Al Shahania mare to be covered by Le Havre, while the daughter of Mastercraftsman is out of Nina Celebre, dam of Hong Kong icon Pakistan Star.

Badgers Bloodstock struck at €110,000 for Nette Rousse, who was rated 95 when trained by Ralph Beckett.

"She's a lovely filly and a very good racehorse, just below black-type level," said Tom Pritchard-Gordon. "We love the family and the covering stallion. Le Havre is an outstanding sire and we hope she will give us a filly.

"Then the mare will be shipped down to Australia. Her sister has already produced a Group horse down under, Invinsible Tears, and Nette Rousse looks like tremendous value at €110,000."

Caliyoun finished fifth on his only start to date for trainer Alain de Royer-Dupre, and Pritchard-Gordon said: "We bought him for a very patient client. There is no rush. We are just discussing what would be best for the horse. 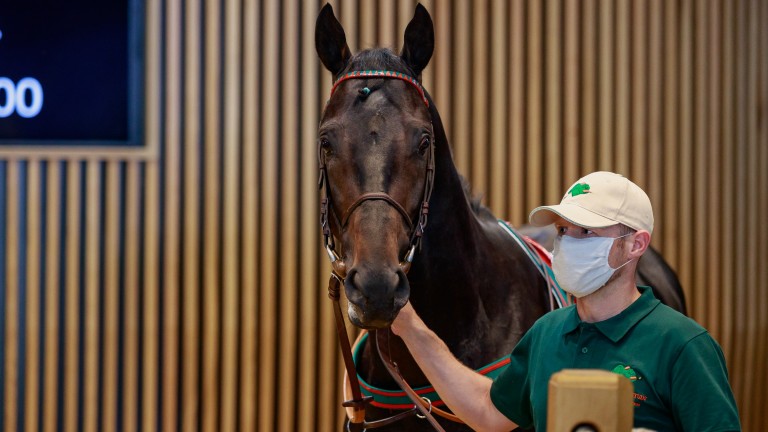 A son of Maxios from the Aga Khan draft, Caliyoun is deemed a long-term prospect by Rupert Pritchard-Gordon
Zuzanna LUPA

"In Lyon, I thought he ran like an immature horse, with a very strong last furlong. I think he did it more with his ability than anything else."

Ian Williams can look forward to training a staying prospect from the Andre Fabre yard after Pritchard-Gordon struck at €80,000 for Justus (lot 459), a twice raced son of Galileo out of the Dansili mare Landikusic, herself a half-sister to Zoffany.

"He's a nice physical, he's going the right way and he's got a good staying pedigree," said Pritchard-Gordon. "Hopefully he'll be a nice staying type and while you know what Ian does over both codes, I think he'd be very happy if he turned out to be a nice stayer on the Flat."

At €150,000 Zileo was the top offering from the Wertheimer draft, with BBA Ireland's Michael Donoghoe landing the winning bid.

A winner over a mile and five furlongs at Chateaubriant for trainer Carlos Laffon-Parias, the son of Galileo is out of the Listed-placed Dynaformer mare Lady Zuzu, who in turn is a half-sister to the Turf Classic and Manhattan Handicap runner-up Optimizer.

"He’ll go back to Ireland to Michael Halford and he's for an existing owner in the yard," said Donoghoe. "He'll be castrated and given some time off. I'm not sure if he will run again this year, maybe he’ll run at the backend. 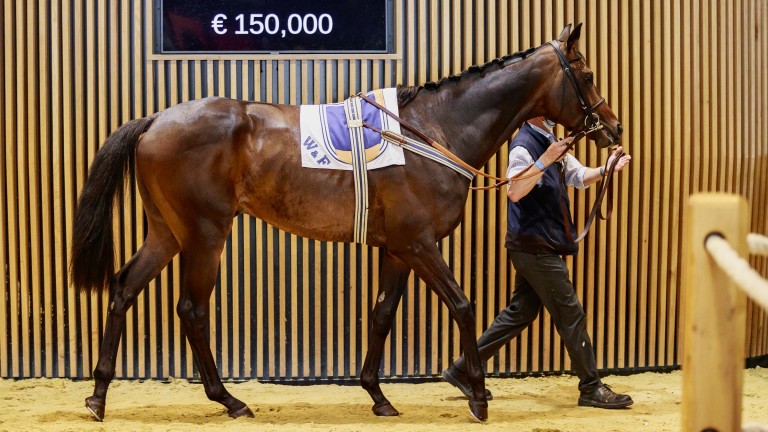 "That's the initial plan. He's got a nice, progressive profile and the owner does like to have a runner in Dubai during the carnival. We think he'll go on the good ground and that he could be a good horse for the middle-distance races there next year."

At €130,000, a second Wertheimer product to perform well was the Gleneagles colt Saranac, who was bought online by Stroud Coleman Bloodstock.

"This very consistent horse won two of his last three starts," said Matt Coleman. "He seems to like fast ground and is going to America. He will run on the Flat with Graham Motion and maybe over the jumps one day. The dam [Sarach] won a good race in America."

The late Vision D'Etat's talent in the jumps sphere was famously advertised by crack French hurdler De Bon Coeur and Hamish MacAuley will be hoping that his son Fast Vision can conquer that discipline on the other side of the Atlantic.

MacAuley gave €100,000 for Hugo Merienne's winning debutant, who is from the family of former Ferdy Murphy stalwart L'Antartique.

He said: "Thomas Leffray from Arqana recommended him to me and I came over to buy a horse to go to America. He's a three-year-old, he looks quite fast and he wants quick ground so hopefully he can be a champion for trainer Lesley Young. I think this is the right horse for over there."

A clearance rate of almost 85 per cent - 223 of the 264 lots were sold - as well as ten six-figure lots contributed to an excellent set of day-two results.

The combination of an expanded section for unraced two-year-olds on Wednesday and the sizeable Ecurie Centrale dispersal meant that 2021's Summer sale catalogue was by far the biggest offered by the company.

But a top price of €400,000 has only once previously been beaten in the sale's history, while an overall clearance rate of 80 per cent for a total of €8,588,500 across the two days will be a source of considerable satisfaction, and the largescale return of British and Irish buyers for the first time in a year was a major feature of the week.

FIRST PUBLISHED 8:01PM, JUL 1 2021
I just thought he was a very, very good individual and he's only going to get better. He's only a young horse and he's got a big future