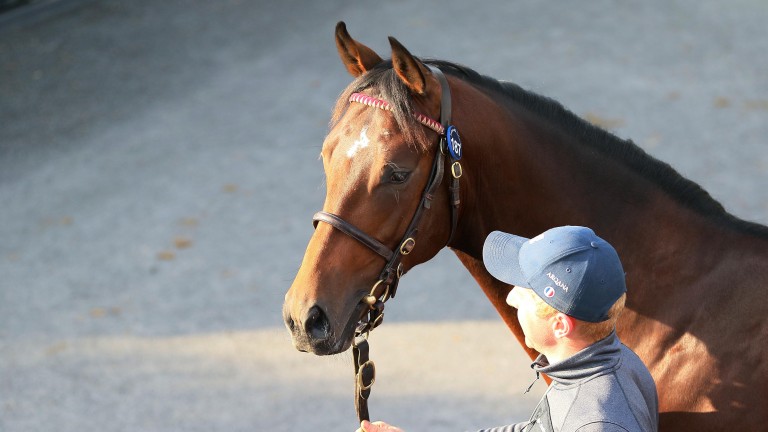 An Indian summer dawned over Tattersalls Ireland on the opening day of the September Yearling Sale, greeting the return of proceedings to the sales complex after two years of enforced exile in Newmarket.

Parking spaces were at a premium from early Tuesday morning, always an indication that trade will be strong, and as the day progressed that initial impression proved correct, with both the average and median heading for record returns.

The six-figure headline lots may have been a little thin on the ground but the quality was unmistakeable.

Tally-Ho Stud's track record for launching stallions onto the market is unrivalled in the last 15 years so their latest such offering, the Group 2 Prix du Gros-Chene winner and Prix de la Foret second Inns Of Court, was never going to fly under the radar.

Louis Kennedy of Mountain View Stud offered an Inns Of Court half-brother to seven winners out of an Unfuwain half-sister to Gutaifan from the family of Lockinge winner Mustashry and Ventura Storm, the first Group 1 winner by Zoffany.

Following spirited bidding, Ed Sackville brought the hammer down at €110,000 for the half-brother to Group 3 Prix d'Arenberg third Haikbidiac.

The colt was bought on behalf of John and Jess Dance's Manor House Farm and Sackville explained what it was that appealed so much to the team. Unsurprisingly, the O'Callaghan family's success at creating sires figured heavily in his thoughtful reply.

Sackville said: "He's a lovely stamp of a horse and a really big, strong imposing type. Inns Of Court is an unproven stallion but if he is anything like Tally-Ho Stud's recent first-season sires then he is going to have a very good chance of being successful.

"Invincible Spirit is a proven sire of sires and let's hope Inns Of Court is another one for him."

The colt was one of three yearlings Sackville purchased to race in the couple's golden silks. He also bought a filly by Tally-Ho's champion first- and second-season sire Mehmas for €80,000. Offered by Brendan Holland, she is a half-sister to the dam of Listed Tipperary Stakes winner Sirici and was bought for €60,000 last November as a foal.

They also acquired a colt from the first crop of another son of Invincible Spirit - Yeomanstown Stud's Sirenia and Chipchase Stakes winner Invincible Army.

A homebred for Yeomanstown out of Little Audio, a Shamardal half-sister to Group 2 Curragh Cup winner Sword Fighter and Listed Chesham Stakes winner Big Audio from the family of Prix de l'Abbaye winner Gilt Edge Girl, he went for €65,000.

Coole House Farm's quartet of colts were stabled in Barn O and, although it is the furthest stable block away from the ring, a path had been worn to the box occupied by Barbara Fonzo and Mark Dreeling's homebred Footstepsinthesand colt.

The half-brother to last week's Group 1 Flying Five Stakes second Erosandpsyche and Some Respect, a triple Listed winner in Italy, was one of the most popular horses in the entire sales complex, with potential purchasers inspecting him since showing began on Sunday.

“He is a stand out for us – he has a lovely attitude, he was up here watching everything with his ears, looking around but going forward the whole time. He is a very straightforward horse.” - @sheilalavery pic.twitter.com/yGkSdAxBx0

One of the most frequent visitors to Barn O was Sheila Lavery, and the trainer's persistence was rewarded. Her brother John was the buyer of the handsome and easy moving brown colt for €100,000, the first horse to make a six-figure sum during the first session of Part One.

Lavery appeared slightly stunned she had been able to secure the grandson of Giant's Causeway for a figure that, in light of the strength of yearling sales so far this autumn in both Europe and the United States, seems to represent good value.

"He really was the standout horse here for us and I thought he would make a lot more than that," she said. "We loved his attitude from the start. He's alert and intelligent, taking everything in with his ears, and he looks to be a lovely, straightforward horse."

That question of his price tag arose and the trainer, whose daughter Joanne will oversee the early education of the new recruit, said: "We will all know this time next year who was right and who was wrong - the people who sat on their hands or us!"

Coole House Farm is offering its largest draft of yearlings ever at the September Yearling Sale on the strength of their success at last year's renewal, when they sold a Footstepsinthesand colt for £95,000 to MV Magnier. His Bated Breath half-brother sells on Wednesday as lot 355.

Fonzo and Dreeling have reaped the rewards of supporting the 2,000 Guineas winner from the only European crop sired by Giant's Causeway, both in the sales ring and on the course.

They sold his Group 2 Minstrel Stakes winner Larchmont Lad for €110,000 at this sale in 2015 to Peter and Ross Doyle, and he is just one example of the success they have enjoyed with progeny of Coolmore's stalwart.

"We're big fans of Footstepsinthesand and the cross with Danehill is a proven one," said Dreeling. "We have been extremely lucky with him and have sold four six-figure yearlings by him."

The couple was also pleased that the colt will be handled by Sheila Lavery.

"We're delighted John Lavery bought him and that he's going to Sheila to be trained," added Dreeling. "She's a brilliant trainer, top class, and he couldn't go to a better home."

Havana is Gold for Tallon

This year Havana Gold has seen his son Havana Grey emerge as one of the best first-season sires in Europe but Tweenhills' 12-year-old Prix Jean Prat winner, who sired the Flying Five and Molecomb Stakes winner in his first crop, is not about to be eclipsed by his son's rising star. 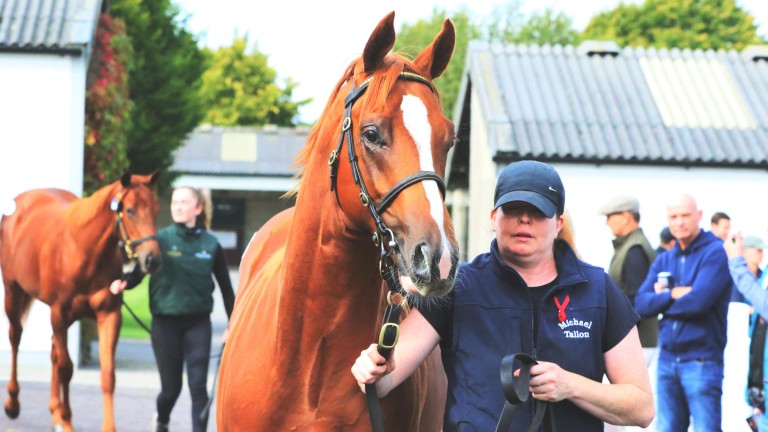 The Havana Gold colt who went the way of Kevin Ross for €95,000
© Peter Mooney

With the identity of that €300,000 auction race winner fresh in the minds of buyers, Michael Tallon's colt by Havana Gold came with a considerably higher sale price than Streets Of Gold did at this sale 12 months ago, when he fetched £27,000.

Tallon's three-parts brother to Listed Hong Kong Derby third Crack On Crack On, by Havana Gold, brought a winning bid of €95,000 from Kevin Ross on behalf of Paul and Clare Rooney.

It was a handsome profit on the 19,000gns Tallon paid for the colt from breeders Whitwell Bloodstock at the Tattersalls December Foal Sale.

Ross is very familiar with the family, having purchased Crack On Crack On at the breeze-up sales.

"He is a smashing colt and our pick of the day," Ross remarked. "This colt is very similar to his three-parts brother. He is a lovely and athletic horse with a good action."

Height Of Fashion's breeder and racing owner, the Queen, was laid to rest on Monday amid a stunning display of pageantry and her late Majesty's impact on the sport will be felt for decades to come.

The Fillies' Mile winner she bred and later sold to the late Hamdan Al Maktoum has made an indelible impression on thoroughbred racing, with Baaeed the latest star to shine brightly for Height Of Fashion.

Descendants of the Princess of Wales's Stakes winner were in huge demand at various sales last year when Shadwell were offloading some of their stock, and the Hassett family of Monksland Stables were able to acquire an Awtaad colt whose third dam, Wijdan, is a half-sister to Nashwan, Nayef and Unfuwain for €36,000 from the draft of Derrinstown Stud at the Goffs November Foal Sale.

“It is a great result and we are thrilled," said Clodagh Hassett of Monksland. He just always did very well, he is a very forward type and he had a very good prep.” pic.twitter.com/Xz07ZHenQ0

The Awtaad colt was an eyecatcher as he strutted around the outside ring at Fairyhouse, his size and scope drawing the eye and notable judge Ross Doyle teamed up with Middleham Park Racing to purchase the strong bay, who was bred by Hadi Al-Tajir, for €87,000.

A delighted Clodagh Hassett eloquently expressed what the sale meant to her family's operation.

"It's a great result and we are thrilled," she said. "It is just a small team - myself and Tom and our children Orla, Meabh and Richie. It is the best result we have had at this sale.

"He is a grand horse but you never know what is going to happen until you go up to the ring and come out the far side."

It was a happy homecoming for the opening session of the Tattersalls Ireland September Yearling Sale as it posted impressive increases in both the average and median.

Tuesday's average of €31,861 was an increase of five points on last year's figure of €30,225, while the median grew by three times that amount, up 15 per cent to €27,000. That is a true reflection of how deep the catalogue was and how much demand there was across the board, even with fewer six-figure sales.

That absence of big-ticket lots, coupled with 24 fewer horses offered for sale compared to the equivalent day last year, contributed to a drop in the total sales on Tuesday. The figure of €6,436,000 was a decrease of five per cent from last year's aggregate of €6,807,434. Tuesday's clearance rate of 88 per cent was similar to that of 2021's opening session, which was 89 per cent.

The second session of Part One continues at 10am on Wednesday.

'He was a fantastic individual and looked the part' - $725,000 colt tops session

FIRST PUBLISHED 8:34PM, SEP 20 2022
Inns Of Court is an unproven stallion but if he is anything like Tally-Ho Stud's recent first-season sires then he is going to have a very good chance