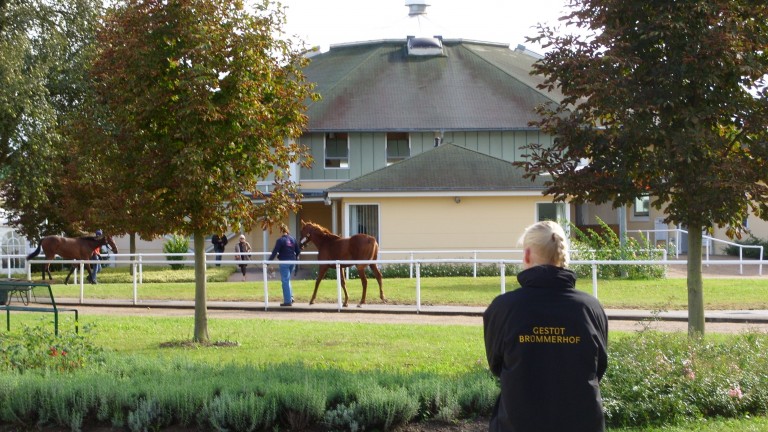 The BBAG sales ground is playing host to the two-day October Mixed Sale
1 of 1
By Bloodstock World staff UPDATED 9:41AM, OCT 16 2021

The opening session of the BBAG October Yearling Sale saw Gestüt Schlenderhan's well-related Guiliani filly make the only six-figure lot of the day when selling to Gregor Baum of Gestüt Brümmerhof for €135,000.

In a timely update, the filly's dam - the winning Acatenango mare Tucana - is none other than the granddam of Prix de l'Arc de Triomphe hero Torquator Tasso, who was already a two-time Group 1 winner in his home country before his success in Paris earlier this month.

Tucana has in turn already produced the Group 2 Diana Trial-winning Adlerflug filly Tusked Wings and stakes-winner Tahini, by Medicean and a Listed winner under both codes.

Almost Unreal, a son of Counterattack who was offered by Gestüt Karlshof, went the way of HFTB Racing Agency after selling as the second top lot for €75,000.

The colt is out of the Listed-winning Areion mare Alwina, who is in turn a granddaughter of champion German filly and German 1,000 Guineas scorer Alte Zeit. Also on the page are Group 3 winner and Premio Vittorio di Capua runner-up Amarillo and fellow black-type winners Alter Adel, Aslana and Red Torch.

@BBAG_Sales first Sales Day almost at the end ... see you tomorrow 10am pic.twitter.com/eTE7NZ1KQD

Adlerflug's untimely death earlier this year was a blow to the German bloodstock industry, but Wilhelm Feldmann secured a colt by the late Classic-winning sire when going to €50,000 for Nebrasko.

Consigned by Gestüt Ohlerweiherhof, the colt is the second foal out of the unraced Nakura, a daughter of Campanologist and Listed scorer Nobilissima. It is a family that includes the Listed-winning German Derby third Nouvelle Fortune, champion German two-year-old Noble Moon and Premio Dormello scorer Nouvelle Noblesse.

A filly by Haras de Bonneval's promising first-season sire Zarak made €42,000 when selling to Thomas Jander from Haras de Grandcamp.

The yearling is the first foal out of the two-time winning Soldier Hollow mare Silver Cloud, herself a half-sister to Listed scorer Sequilla and from the family of multiple German Group scorer Santiago and German Derby runner-up Sordino.

Another first-season sire, The Grey Gatsby, who has been represented by four individual winners including the stakes-winning Mylady, was on show when Haras de Grandcamp's colt by him realised €40,000 to Andreas Hacker.

Named Rely On Old Sport, the colt is the first foal out of the unraced Reliable Man mare Carrigart Belle, a half-sister to Listed Flat winner and Grade 3 hurdles scorer Rich Coast and Casual, the dam of Australian Cup victor Harlem.

The sale continues on Saturday from 10am local time.

Another top lot for Time Test as 95,000gns colt leads the way at Book 3 finale

FIRST PUBLISHED 9:27AM, OCT 16 2021
The colt is the second foal out of the unraced Nakura, a daughter of Campanologist and Listed scorer Nobilissima