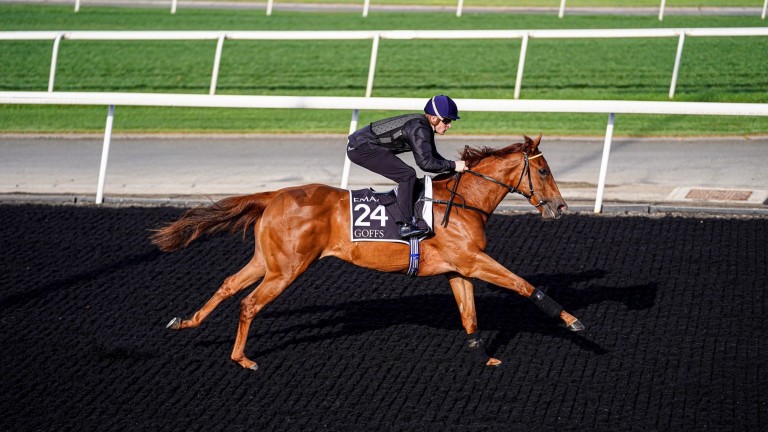 Goffs and the Dubai Racing Club will again conduct the Dubai Breeze-Up Sale in 2023, following the success of the inaugural sale this March.

The event will be held at Meydan during the Dubai World Cup meeting again next March and will be confined to a maximum of 69 two-year-olds selected by the Goffs inspection team.

Travel subsidies will be available to vendors and all entries will again undergo a full veterinary examination prior to departure to ensure full transparency and buyer confidence.

The first Dubai Breeze-Up Sale in association with Goffs, the only sale of its kind ever held in the Middle East, attracted a diverse range of buyers and trade was topped by a son of Dubai World Cup winner Curlin that was sold by Powerstown Stud to Mohammed Al Subousi for AED2,500,000 (£560,000/€665,000).

On Monday at Ayr the sale produced its first winner, Dubai Jemila. The daughter of Dubawi was consigned by Malcolm Bastard and made AED1,400,000 to Yousuf Salem Saeed Saqer Al Kaabi.

"And in keeping with the success achieved by the region’s first ever sale of its kind, we are pleased to announce the second edition in 2023 and we once again welcome Goffs aboard as partners in conducting the second edition of the sale during the week of the Dubai World Cup 2023.

"I’m all for anything that will bring new money into the sport, and fair play to Goffs and the Dubai Racing Club to establish this."

"In partnership with Goffs, we look forward to another thrilling edition of the sale where again some of the world’s top racing connections will go head to head in a bid to sign future champions.”

Goffs group chief executive Henry Beeby added: “It was an honour for Goffs to be selected by Sheikh Rashid bin Dalmook to conduct the inaugural Dubai Breeze-Up earlier this year.

"Following a superb start, it is a wonderful endorsement of the Goffs service to have been reappointed to grow and develop this world-class sale. Solid foundations are in place, and the Goffs inspection team led by Nick Nugent and Tom Taaffe along with our vendors will take the learnings from year one and fine tune the sale to ensure we present a catalogue that best matches what the buyer seeks.

"Goffs was delighted to be involved in introducing a sale such as this on the eve of the world’s most prestigious race and we look forward to working with the team of the Dubai Racing Club to deliver an exceptional bunch of two-year-olds to Dubai next year."

The two-year-olds will fly to Dubai and carry out quarantine prior to the sale. Nominations close on December 1 and inspections will take place following the conclusion of the yearling sales season.

FIRST PUBLISHED 12:06PM, AUG 5 2022
We look forward to another thrilling edition of the sale where again some of the world’s top racing connections will go head to head

'As with Dubawi, Cracksman could be proving all the big judges wrong again' Post-Brexit breakthrough achieved on temporary thoroughbred transportation 'He was the one we really wanted' - Godolphin win out for €2 million Dubawi colt 'Thrilled' - Palin leaves Arqana with big dreams after securing Almanzor colt 'Night Of Thunder is very much a horse to target to buy yearlings by' 'It's more what you can get your hands on' - Star Bloodstock on the Arqana mark
Bookmaker
Price
E.W. Terms
bet365
Open Account
Ladbrokes
Open Account
William Hill
Open Account
Coral
Open Account
Paddy Power
Open Account
Betfair
Open Account
Sky Bet
Open Account
Sporting
BetVictor
Boylesport