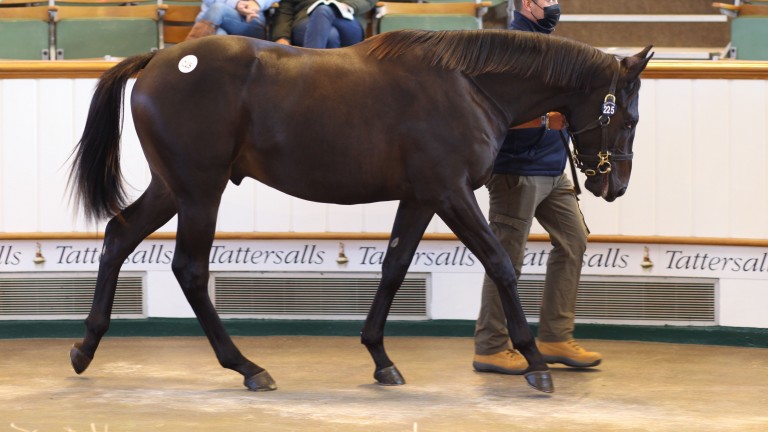 It was not all plain sailing for vendors during day two of Book 1 of the Tattersalls October Yearling Sale, as was to be expected given the market downturn experienced this year, but Sheikh Mohammed's appetite for the most choice offerings continued to supply some soaring highs.

Godolphin signed for the four most expensive yearlings on day two, headed by a 1,100,000gns Dubawi colt, taking the operation's Book 1 buys to 17 lots acquired for a total of 12,700,000gns - around 26 per cent of turnover across the two days.

Mike and Michelle Morris may be relative newcomers to the breeding ranks, but their sizeable early investment produced a big result on Wednesday when Anthony Stroud, bidding on behalf of Godolphin, went to 1,100,000gns for the couple's Dubawi colt consigned by Highclere Stud.

The seven-figure youngster is the first foal out of Intricately, the daughter of Fastnet Rock who won the Group 1 Moyglare Stud Stakes for Chantal Regalado-Gonzalez and Aidan O'Brien in 2016.

Intricately's race record helped to ensure that she topped day one of the Tattersalls December Mares Sale in 2017 when knocked down to John and Jake Warren on behalf of the Morrises at 1,700,000gns.

"I'm thrilled for Mike and Michelle Morris," said Highclere's Lady Carolyn Warren. "They're clients of ours, Jake bought the mare for them, and they're lovely people. They stepped up and bought this fantastic mare and she's really repaid them.

"He's a gorgeous colt, he was gorgeous from the day he was born, he's been so straightforward and has a fantastic temperament. I'm delighted for Anthony Stroud and Sheikh Mohammed. Dubawi is a brilliant stallion and this colt looks like he's got a bit of magic about him." 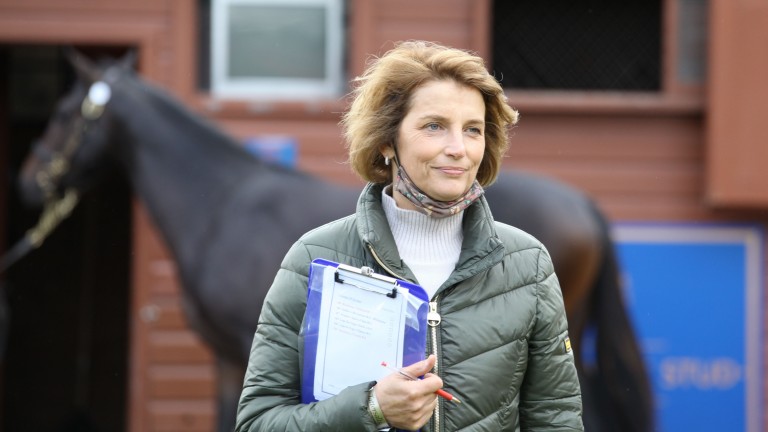 Lady Carolyn Warren: "This colt looks like he's got a bit of magic about him"
Laura Green

Warren explained that the Morrises' boutique broodmare band boards at Highclere, and also includes the likes of Hartford Dancer, whose Dubawi colt sold for 300,000gns shortly before the seven-figure son of Intricately.

"The Morrises have some other mares with us, we sold a Dubawi colt out of Hartford Dancer, who we own in partnership, earlier today," she said. "Anthony bought that colt too so that was great.

"They're doing it the right way and it's lovely to see them having such success. Michelle is a great horsewoman herself and Mike is very interested in racing. Intricately is in foal to Kingman and she has another Dubawi colt at foot, so we might see him up here next year too."

The seven-figure mark was reached for a second time later in the day when the Frankel half-brother to brilliant sprinter Marsha was knocked down at 1,000,000gns. However, it transpired that the blue-blooded colt had been bought back on behalf of the colt's breeders, the Elite Racing Club.

The son of Frankel is the final foal out of Elite Racing's ill-fated star broodmare Marlinka, who tragically succumbed to colic earlier in the year. The daughter of Marju left three winners, with Nunthorpe and Prix de l'Abbaye heroine Marsha joined by the talented Judicial and Marseille.

Elite Racing manager Dan Downie will be hoping that becomes four winners in the years to come when the Frankel colt sports the club's famous white and black-spotted silks.

"We know he's a nice horse so it's exciting for the club to be able to keep one like this," he said. "We've always said to our members that we don't have an endless pot of money and we need to make sure the club is secure financially. If he were to have made a lot of money we couldn't afford not to sell, but that wasn't to be."

The Frankel covering that resulted in this colt was, at least in part, funded by the sale of Marsha, who set a European record when sold to Coolmore for 6,000,000gns at the December Sale in 2017.

Godolphin's haul also took in the Lope De Vega colt out of Moi Meme offered by Hillwood Stud when Stroud got the better of David Redvers with a bid of 900,000gns.

The youngster's page boasted a significant update as his two-year-old brother King Vega was last seen finishing a close second in the Group 3 Solario Stakes.

"He's been a lovely horse all along but that was beyond our wildest dreams," said an emotional Charlie Vigors of Hillwood. "He was bred at home by Fortescue Bloodstock, which is a syndicate of mainly London-based investors who have been buying some blue-chip mares. It's great when you get a reward like that. 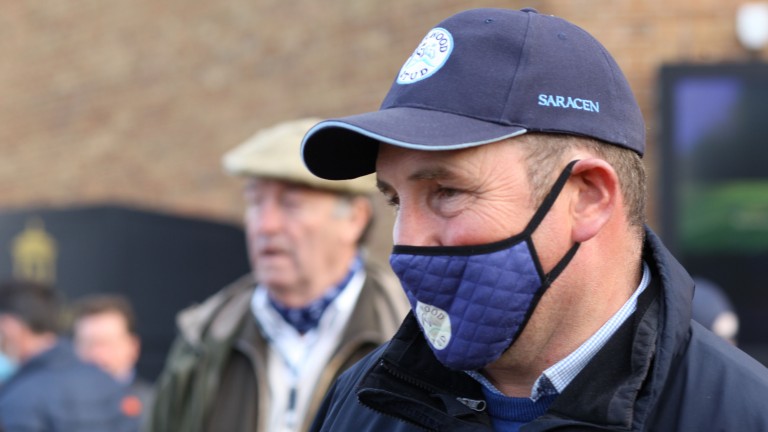 Charlie Vigors: "That was beyond our wildest dreams"
Laura Green

"We put a sensible reserve on him but that's the beauty of public auction; two people can lock on to the same horse and after that anything can happen."

The colt is the third foal of Moi Meme, a Listed-winning daughter of Teofilo who was signed for by Old Mill Stud at €440,000 at the Arqana Breeding Stock Sale in 2015.

The eight-year-old has been mated with Lope De Vega exclusively since she retired to the paddocks. The Ballylinch Stud stallion stood for €45,000 in the first year Moi Meme visited him, a fee that has since risen to €100,000. 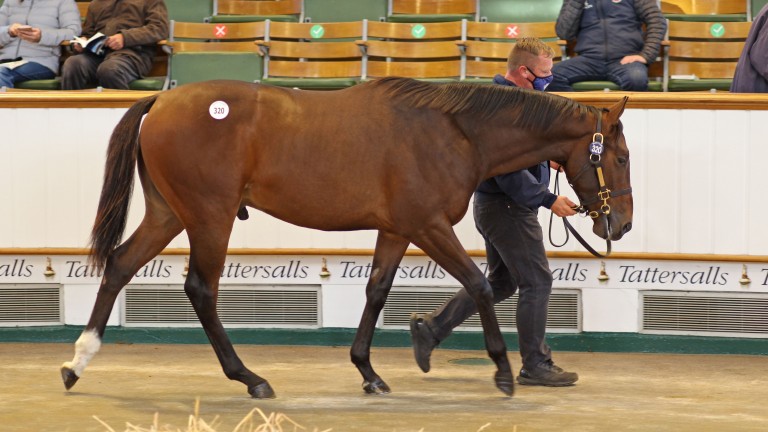 "The mare has a lovely Lope De Vega filly foal on the ground and she's back in foal to him again," continued Vigors. "Her progeny have all been so nice that she's been married to Lope De Vega, who's obviously one of the top young sires.

"We picked him out as a sire on the up a few years ago, but we need paydays like this to be able to keep going back to him now!"

The purchase of Gryada in December 2006 continues to pay rich dividends for Nicholas Jones of Coln Valley Stud, as a Dubawi colt from a burgeoning branch of the great mare's family went the way of Godolphin at 800,000gns early on during Wednesday's session.

The six-figure youngster is the first foal out of Great And Small, a daughter of Galileo and Gryada who carried Jones's silks to success in a Chester maiden and a career-best effort when fourth in the Listed Noel Murless Stakes.

There was a distinct sense of deja vu about the transaction as last year's Book 1 saw a Kingman colt out of another daughter of Gryada, Grace And Favour, go Godolphin's way at 2,300,000gns, while a Showcasing colt out of a third daughter, Grace And Glory, was knocked down for 600,000gns in 2018. 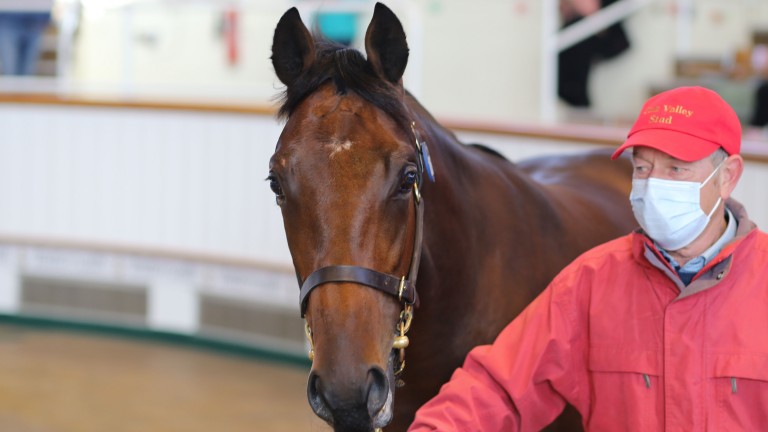 Despite the remarkable strike-rate of Gryada's daughters, Jones said the nature of the breeding business meant he had suffered his share of pre-sales anxiety.

"It's a nerve-racking game, this," he said. "Those three minutes are the only time we have any revenue coming into the stud. It's the one chance we get each year to have cash coming in, rather than going out, so I'm delighted.

"I do love the breeding game but I lose about a stone in weight coming up here every year. Although my wife would say that's a good thing!"

The pedigree has grown exponentially since Jones purchased Gryada for 180,00gns through Amanda Skiffington 14 years ago, thanks in no small part to the mare's son Fame And Glory and daughter Yummy Mummy, who is better known as the dam of Legatissimo. 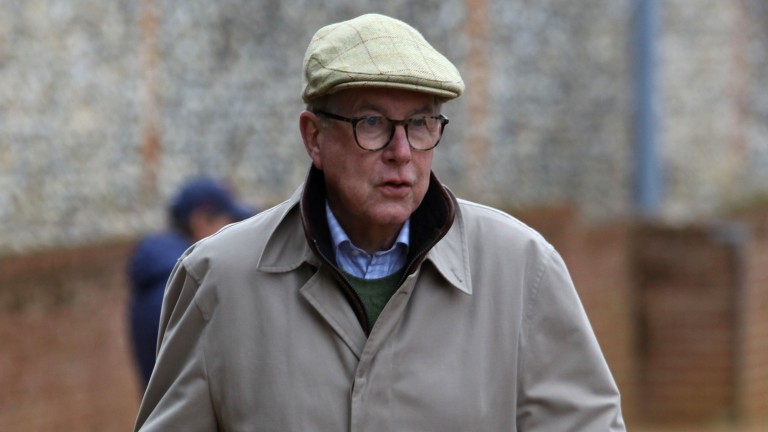 Nicholas Jones: "It's a nerve-wracking game, this"
Laura Green

Jones reflected on the impact the late Gryada has had on Coln Valley since her acquisition, saying: "Gryada died a few years ago, she was quite old when I bought her, but she left these three fillies for us. She's been a wonderful broodmare for us and given us an enormous amount of fun.

"Great And Small is the third daughter of Gryada we have and this is her first foal. I have a full-brother to this colt at home, so I've just told Anthony Stroud I hope to see him here next year too! She's in foal to Bated Breath.

"All the colts we've sold out of Gryada's daughters have sold well, which is exciting and means I can afford to keep the fillies now."

Jones went on to explain that it was the exploits of Gryada and her daughters that had supplied the finances to fund nominations to the likes of Dubawi and Kingman.

He said: "She's also enabled us to go to these top stallions. I'm not sure what will happen with fees next year but our mares will still want to go to the best stallions, so I'm afraid I'll be writing a lot of cheques to the stallion owners.

"We have a small stud and try to have the best mares we can afford. I have a wonderful stud manager, Ian Emes, he's actually retiring next month after spending 18 years with me. Glen Eddery will be taking over."

Godolphin's spree continued right into the evening when Stroud went to 700,000gns for the Frankel filly out of the Listed scorer Pearly Steph offered by French-based consignor Haras de Saint Pair.

The page is replete with black type and traces back to Saint Pair's foundation mare Pearly Shells. Pearls Galore, who appears beneath the second dam, added further black type when she finished second in the Group 3 Fairy Bridge Stakes on her most recent outing.

"She's a lovely filly," said Saint Pair's Andreas Putsch. "We have plenty of the family, the family has been with me all the way since Pearly Shells, who won the Prix Vermeille and who we bought as a yearling at Goffs. Breeding is a long-term business and we've built the farm around her basically."

One more for Westerberg

Georg von Opel's Westerberg signed for the session's fifth-top lot after Tom Goff from Blandford Bloodstock went to 680,000gns from the Siyouni filly out of Mischief Making, a Listed winner by Lemon Drop Kid, offered by Highclere Stud.

The filly is a sibling to five winners, most notably Cliveden Stud's Lancashire Oaks heroine Horseplay and the Listed-winning More Mischief.

"She's been bought for Georg von Opel's Westerberg," confirmed Goff after signing the docket. "She's an absolute queen, a lovely filly with a fabulous outcross pedigree. John Gosden is going to train her."

Goff's other purchase on behalf of Westerberg turned out to be Miss Yoda, the daughter of Sea The Stars who won the German Oaks having been one of the joint top lots at the 2018 BBAG Yearling Sale at €280,000.

Book 1 of the Tattersalls October Yearling Sale concludes on Thursday with a session starting at 11am.

FIRST PUBLISHED 11:02AM, OCT 19 2020
He's been a lovely horse all along but that was beyond our wildest dreams