Txope, a high-class daughter of Siyouni, will be offered as lot 421 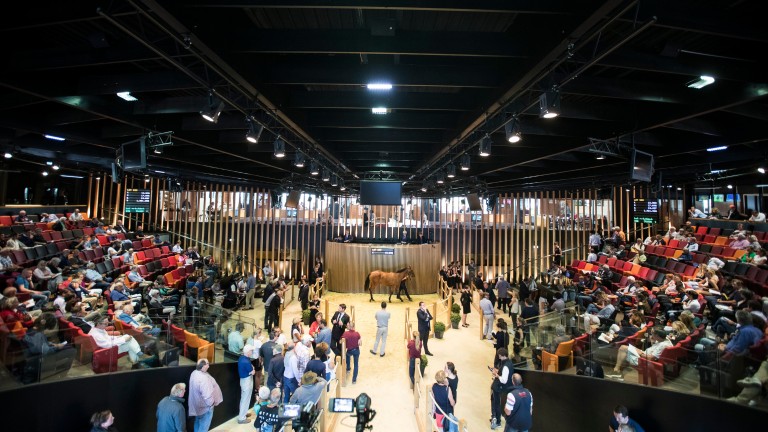 Txope, the gritty winner of this month's Group 2 German 1,000 Guineas in Dusseldorf, is one of seven wildcards added to next week's Arqana Summer Sale catalogue.

A high-class performer for World Cup-winning footballer Antoine Griezmann's Ecurie Griezmann and trainer Philippe Decouz, the three-year-old daughter of Siyouni will be offered as lot 421 in the three-day auction.

Third to Poule d'Essai des Pouliches heroine Mangoustine in last year's Group 3 Prix Miesque at Chantilly, Txope has also been Listed-placed twice this season and holds an official rating of 108.

Last weekend's Group 3 Prix du Bois third Havana Angel will be sold as lot 471. The daughter of leading first-season sire Havana Grey was a nine-length winner on her penultimate start at Dieppe for Amy Murphy and comes from the family of Group winners Sweet Roberta, Brody's Cause and Duke Of Venice.

Wild Cards including added to the Summer Sale catalogue!

This week's Saint-Cloud winner Mr Dreamer, a son of another first-season sire in Mr Owen, is catalogued as lot 472. Trained by Igor Endaltsev, the colt struck by two and a half lengths on his second start, while winning jumper Fellow Hawk (470), a son of Kingston Hill, is another lot to watch as a three-length winner on his first outing.

Choeur De Mus, a four-year-old son of Chœur Du Nord and from the family of dual Queen Mother Champion Chaser Master Minded, will be sold by Nicolas Paysan as lot 501. He was second on his debut at Vichy late last month.

Hector de Lageneste and Guillaume Macaire's Zertakt (502) has won twice this season, most recently at Auteuil in the Prix Daniel Lescalle. The son of Chapel Stud's Walzertakt comes from the classy family of Taranis and Chance Du Roy.

It's A Good Name, a winner over hurdles on his third start, will be sold by Jérôme Delaunay as lot 503. The AQPS gelding is out of a half-sister to Grade 1-winning chaser Cyrname.

FIRST PUBLISHED 4:07PM, JUN 22 2022
The daughter of leading first-season sire Havana Grey was a nine-length winner on her penultimate start at Dieppe for Amy Murphy