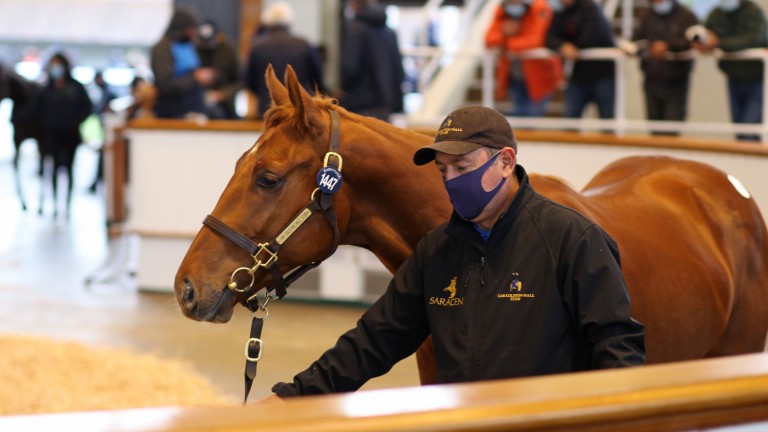 With one seasoned judge describing Book 2 of the Tattersalls October Yearling Sale as "the strongest sale I've been to in ten years" Book 3 had a tough act to follow.

Nonetheless, trade proved lively from the off and by the close of proceedings on Thursday there was a four-way tie for top lot honours as a quartet of yearlings boasted a 130,000gns price tag.

Remarkably the clearance rate improved on the result generated on this day in 2019, with 237 of 270 offered lots selling at a clip of 88 per cent, up from 86 per cent 12 months ago.

Other metrics largely held steady, with turnover of 5,092,700gns down two per cent, albeit from a three per cent smaller offering; the average was down one per cent to 21,490gns and the median was identical at 16,000gns.

Among the four 130,000gns lots was the Churchill filly out of Purple Glow consigned by Keith Harte who went the way of Joe Foley and Clipper Logistics. The filly is closely related to three winners, most notably the 5f Listed scorer Main Desire, a daughter of High Chaparral who also raced for Clipper. 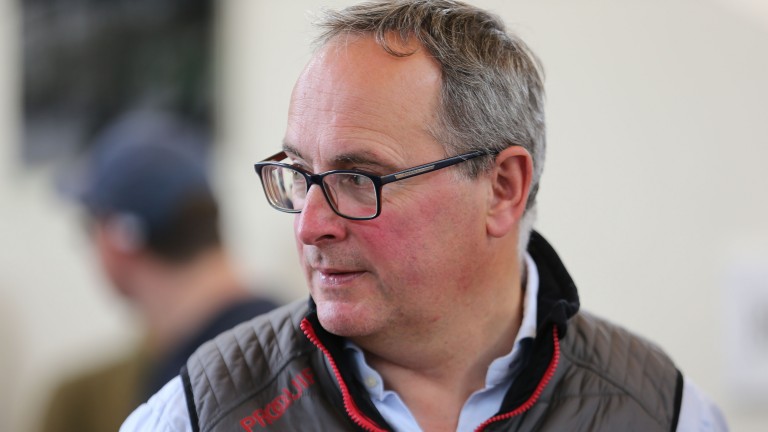 "The mare has bred very fast horses by High Chaparral, New Approach and Mastercraftsman so she's put a lot of speed into them. Churchill is the fastest sire she's been too."

Main Desire has since joined Clipper's broodmare band and has a "very nice" Frankel filly foal and is carrying to Churchill. "We love Main Desire, she's one of our favourites," said Foley.

The six-figure Churchill filly was bred by Max Ervine, who purchased the dam, a Listed-placed daughter of Orientate from a deep US family, for 160,000gns at the 2011 December Mares Sale. 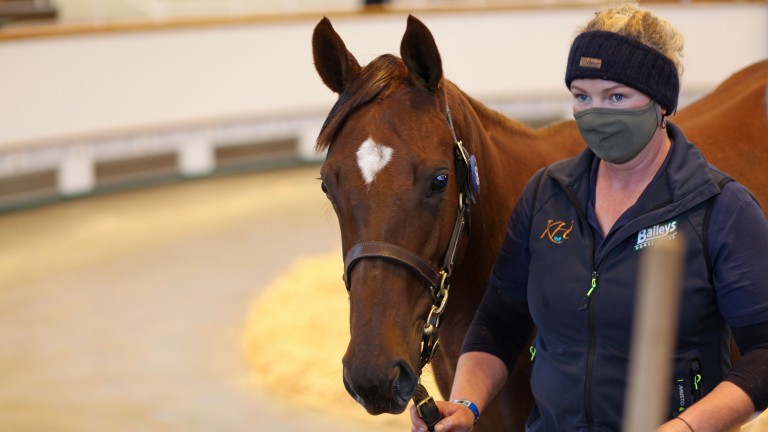 The Churchill filly out of Purple Glow sells to Joe Foley for 130,000gns
Laura Green
"We bought Main Desire from Max cheaply so it's good to give him a proper price for a change!" joked Foley after receiving thanks from Ervine. The delighted breeder also had an update on Purple Glow.

He said: "She's in foal to Magna Grecia. I bought her off Jim Bolger here in the December Sale when she was carrying to New Approach. I got my money back out of that New Approach foal [Magical Effect, bought by John Ferguson for 180,000gns] and it's gone on from there. She's a wee bit difficult to get her in foal but I think we've got the measure of her now."

It took just 12 lots for the six-figure mark to be hit as Blandford Bloodstock's Tom Goff went to 130,000gns for the Mehmas filly out of Araajmh offered by Kitty Cowhey's Loughmore Stables. The half-sister to the Listed-placed All Star Cast is set to join Ed Dunlop's stable.

"I saw her in the pouring rain yesterday and again this morning and she's an absolute star," said Goff. "Ed Dunlop rang me at 9.50am from Warren Hill and asked if there was anything early, and I said yes there was. Things happen fast in Book 3! She's a lovely mover and I bought one by the same sire on Monday; he's an absolute revelation." 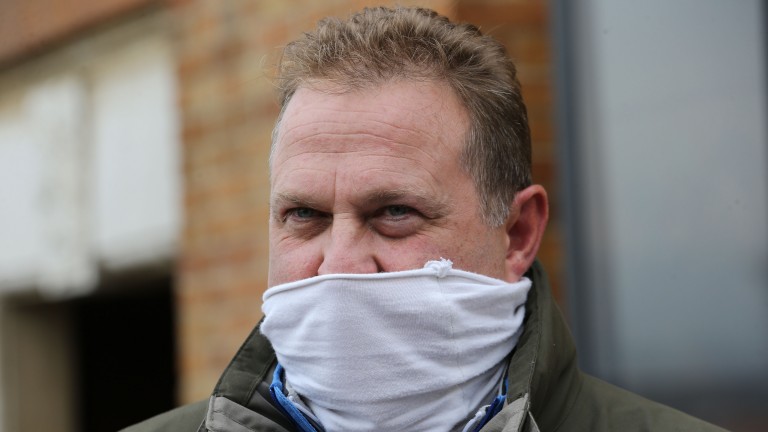 Tom Goff: "Things happen fast in Book 3!"
Laura Green
The transaction proved fruitful for Cowhey and Luke Barry of Manister House Stud after the pair had partnered on the filly at €11,000 when she was offered by Cloneymore Farm at last year's Goffs November Foal Sale.

"She was a lovely filly with strength and a big walk and we've liked her from the day we bought her," said a delighted Cowhey. "Obviously Mehmas has had a very successful year, which was a huge help. I actually have a mare in foal to Mehmas because I liked this filly so much."

Despite an understandable amount of market anxiety ahead of the October Yearling Sale, Cowhey said the filly's inherent quality had been a big source of encouragement. 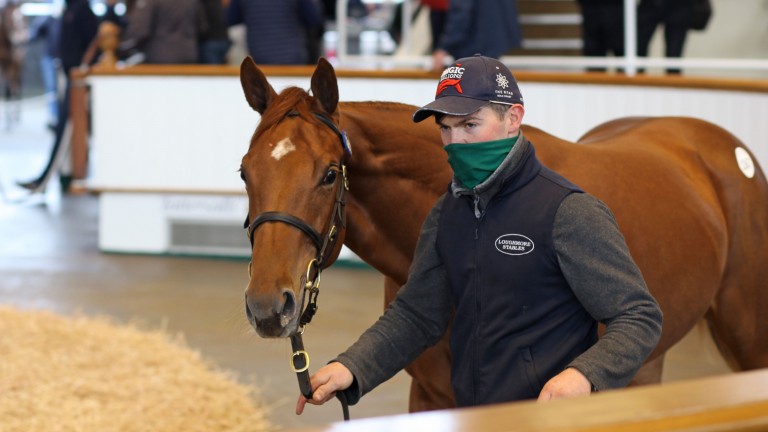 Lot 1,367: the Mehmas colt out of Araajmh goes to Tom Goff for 130,000gns
Laura Green
"I was always confident that there'd be a twist in her," she said. "I didn't think she was going to make that sort of money but I liked her a lot and I'm not gobsmacked that she made it. She's come here and behaved like a queen and all the right lads were on her so I'm delighted.

"I hope she's lucky for her new owners. Book 2 has been very strong, which is amazing when you see what else is going on in the world. We have to be grateful we're here trading at all."

The 130,000gns mark was hit for a second time a short while later when Brendan Holland of Grove Stud secured the Night Of Thunder colt out of Dominike consigned by Hazelwood Bloodstock.

"He's a good type by a leading sire," said Holland, who confirmed the colt would be prepared for a tilt at next year's breeze-ups. "He's a lovely clean limbed horse and he definitely would've matched up against the horses from Books 1 and 2. Fingers crossed he's lucky."

Holland added: "I've bought 19 for next year's breeze-ups so we're at our normal level. It was unbelievably strong trade at Book 2, no one could have predicted how strong it was. It was great to see as it gives everyone a bit of confidence, especially ahead of the foal sales as there was definitely a bit of concern about those. Hopefully it carries through into the breeze-ups too." 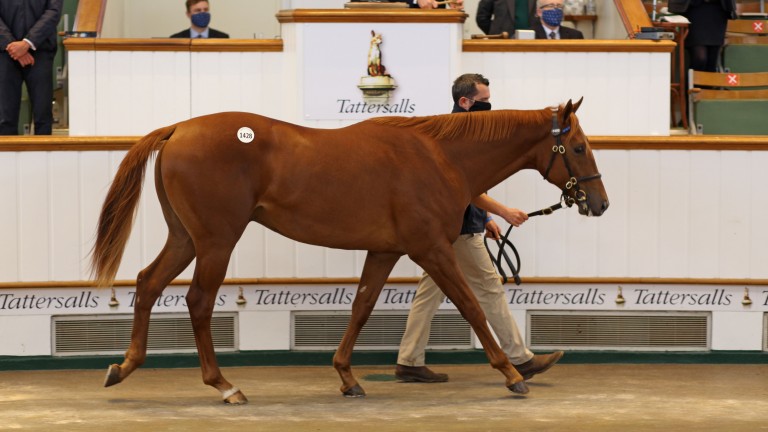 Lot 1,428: the Night Of Thunder colt bought by Grove Stud for 130,000gns
Laura Green
The colt, out of an Italian-bred daughter of Duke Of Marmalade, turned a tidy profit having been signed for by Troy Steve Bloodstock as a foal at 20,000gns. Hazelwood's Adrian O'Brien noted the youngster had made giant strides since the foal sales, but said the successful pinhook owed plenty to the draw of the sire.

"Let's face it, it's all about the stallion this year," said O'Brien. "He looks a fantastic sire, he's had a sensational year – we'd like to thank Night Of Thunder! It's an amazing result but he's grown beautifully from foal to yearling and the lads at home – Tom Hughes and the team – have done a huge job with him.

"We saw potential in the horse and I bought him with a couple of friends as a fun horse. Trade for us has been steady [during the October Sale] but that caps it off."

Foundation family to the fore

The foundation mare, the second dam of this colt, has bred nine winners, including Racing Post Trophy hero Crowded House, Listed scorer On Reflection and Argent Du Bois, dam of Brando and Sant Elena, herself the dam of Reckless Abandon and granddam of West End Girl. Erasmo, another son of Sant Elena, further enhanced by pedigree when winning the Listed Prix Saraca for Andre Fabre on Sunday.

"It's a wonderful family and Car Colston are great breeders, a stakes horse seems to pop up on that page every year," said Coleman. "He's been bought for a client of Anthony's and mine and will go into training in France. 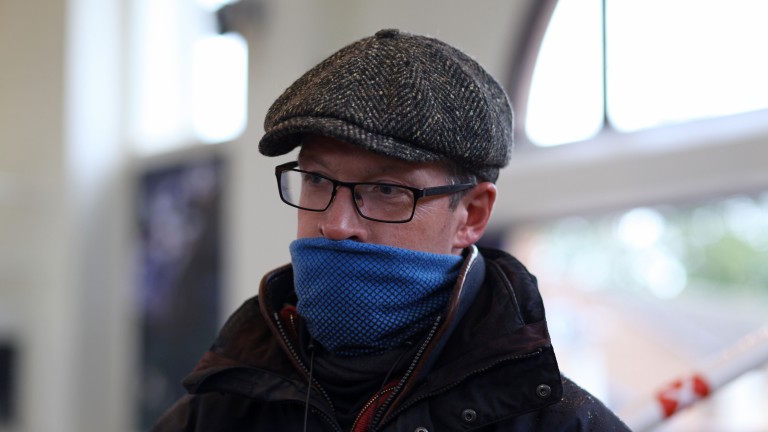 The colt is the first foal out of Fair Daughter, an unraced daughter of Weiner Wald and Nathaniel.

"He's the first foal out of Fair Daughter, who was the penultimate foal out of Wiener Wald," said Car Colston Hall stud manager Jonathon Smithers. "Wiener Wald has been phenomenal for us and it's a pedigree that just keeps improving, especially with Erasmo winning a stakes race for Andre Fabre.

"I'm glad this colt made the kind of money he deserved. We had a difficult Book 1 and 2 but we're delighted with him and I hope he's lucky for his new owners."

Having come up against stiff competition in Books 1 and 2, plenty of breeze-up consignors were on the hunt for ammunition for next year's two-year-old sales. Among those who struck on Thursday was Johnny Hassett of the Bloodstock Connection, who landed a Havana Gold colt offered by Hegarty Bloodstock for 55,000ns.

"I loved him," said Hassett. "I've found it hard to get horses of that quality for the last three weeks, not because they weren't there but because I couldn't afford them - 55,000gns wasn't buying you much in Book 2."

The colt, from the first of Havana Gold's more expensively bred crops, is out of Cape Cay, a daughter of Cape Cross from the family of Balisada and Poet's Word. The youngster was pinhooked through Stroud Coleman for 19,000gns at last year's foal sale.

Book 3 continues on Friday at 10am.