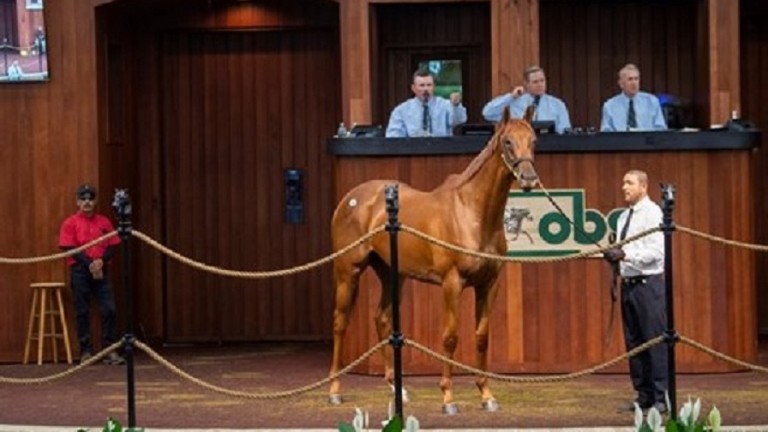 The Nyquist filly who topped the second day at the sale in Ocala
Joe DiOrio
1 of 1
By Michael Compton of Bloodhorse 10:55AM, JUN 11 2021

A filly by Nyquist purchased for $420,000 by Kim Lloyd's Sweetwater Trading Co, agent for Rockingham Ranch, topped the second session of the Ocala Breeders' Sales June Sale of 2-Year-Olds in Training and Horses of Racing Age in Ocala, Florida.

Consigned by Eddie Woods, agent, the chestnut filly is out of the stakes-winning Midnight Lute mare Midnight Ballet, a half-sister to Jala Jala, a Horse of the Year and champion three-year-old and older mare in Mexico by Point Determined, and to stakes-placed Moon Buzz, by Malibu Moon.

Bred in Kentucky by Stoneway Farm, the filly was acquired by Quarter Pole Enterprises for $200,000 from the Paramount Sales consignment at last year's Keeneland September Yearling Sale. She breezed a swift eighth-mile in :10 1/5 at the under tack preview ahead of her trip through the auction ring on Thursday.

Lloyd, the former general manager of the California-based sale company Barretts Equine Sales, which ceased operations in 2018, beamed when discussing the merits of the filly.

"We loved her," said Lloyd, following a spirited round of bidding. "Eddie is a really good friend of mine. When I ran Barretts, I could always depend on Eddie to bring good horses. He has horses that not only sell well but perform well. That's what Eddie is so good for. He is such a great horseman.

"He was telling me about the filly that he was going to sell in March (Fasig-Tipton Gulfstream Sale). He gave her time off, and I'm going to tell you, you give a horse time off when they are young like that and let them come around, this is what you get. She can go from here to the races, and we're very excited."

Lloyd added: "She's a scopey filly. You can see that she hit a growing spell. I was just really impressed with everything about her."

The filly's journey from last year's Keeneland sale to session-topper at OBS June included a detour of sorts.

"She went through the winter real well and she fell apart on me in February," shared Woods. "She was in the Fasig catalogue (Fasig-Tipton Gulfstream Sale), and she just wasn't hitting right, so we stopped on her.

"We turned her out for five weeks, [and] brought her back. We didn't want to take her to Timonium (Fasig-Tipton Midlantic) because she's too big, and we had no other option but to come here.

"The time did her well. She was always going to be a nice filly regardless of where we went. I'm very happy with the way it turned out."

Fillies led the way in the session as the second-highest price of the day was a $350,000 filly by Dialed In bought by Alistair Roden Bloodstock for Peter Redekop.

Consigned by Wavertree Stables, the filly is a half-sister to multiple graded stakes winner Anothertwistafate and graded stakes-placed Ajourneytofreedom.

The top-priced colt of the session was by Hard Spun and he went to Karl and Cathi Glassman for $335,000. Consigned by Eisaman Equine, agent, the colt is out of the unraced Speightstown mare Lovisa, a half-sister to stakes winner High Noon Rider and Poupee Flash, a stakes winner and Group-placed in France. This is also the family of champion sprinter and Grade 1 winner Aldebaran and Grade 1 winner Good Journey.

"It was another good day for us. We carried a lot of momentum that we had yesterday over to today, and I think it will carry on to tomorrow," said Todd Wojciechowski, OBS' director of sales.

"I think there were plenty of good horses that breezed the last few days for this sale day (Friday). There is still a demand for horses out there. It seems like we always get to the end of sales, and people start scrambling and say, 'Hey, I haven't found anything yet,' and maybe they press a little harder on the last day. But I still think we will have plenty of good trade tomorrow as well."

He continued: "I think, particularly on an overall scale for the two-year-old season, we were missing a big part of our buying bench in the Koreans.

"I think domestically, we have done a great job of picking up the slack the hole that the Koreans left in the market. Hopefully they will be back next year. I think one thing to be impressed with in this sale and throughout the season is the depth that we've had."

FIRST PUBLISHED 10:55AM, JUN 11 2021
I'm going to tell you, you give a horse time off when they are young like that and let them come around, this is what you get