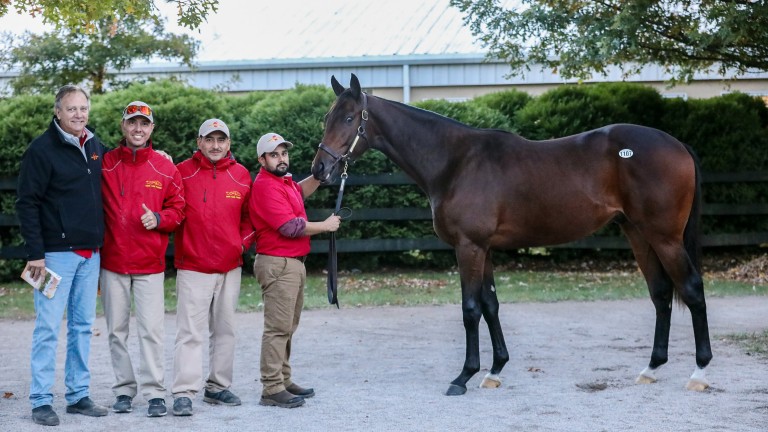 The session-topping Street Sense colt who sold to Jacob West from Sam-Son Farm for $925,000
Fasig-Tipton Photosphotos by Z
1 of 1
By Lauren Gash of Bloodhorse UPDATED 10:07AM, OCT 28 2021

It had been 22 years since the Fasig-Tipton Kentucky October Yearlings Sale saw Pure Charm, a Storm Cat filly, bring a sale record price of $925,000.

That record for the sale's top price may not have been broken on Wednesday, but it was equalled as that same number lit up the bid board when a son of Street Sense from Sam-Son Farm's prolific family of Dance Smartly showed up in the ring.

The record-tying price came on the same day the sale set a new gross record, with one more day of selling still to go. It also set a new benchmark for the top-priced colt in the sale's history, with the previous mark of $750,000 also set and matched at this year's sale.

Consigned by breeder Sam-Son Farm, the Ontario-bred's page tells the history of the past 50 years of hard work the Samuel-Balaz family has put forth. The October sale concludes the final chapter in their story of producing a long list of champions.

"The sale topper, while bittersweet, you hate to see a historic operation like Sam-Son Farm make a business decision, as the family dynamics have changed. They have had a wonderful program and brought some wonderful horses to us here at Fasig-Tipton," Boyd Browning Jr., president and CEO of Fasig-Tipton, said at the close of the third of four sessions.

"The team in Tom Zwiesler and David Whitford are true professionals in every sense of the word, both in terms of how they present their horses and how they represent Sam-Son like they own the farm," Browning continued. "It was a great tribute to them and the Samuel family to set the record here in October."

The Street Sense colt highlighted another day of strong trade at the Fasig-Tipton October sale.

"A continuation of the euphoria, enthusiasm, and excitement throughout the day," said Browning. "It was beyond what you could hope for … There were times throughout the day where every horse through the ring got sold. Setting an RNA rate today of less than 13 per cent, and I promise you by tomorrow, a large chunk of that 13 per cent will be sold with buyers fighting for them in the morning."

"It's nice to see people walking around smiling, even the buyers when they get enthused and are getting outrun. It feels good to be involved in an active, healthy marketplace," Browning said. "In the pavilion, buyers are fighting for horses, and you go outside where it's so full you can't move."

Just after 4 pm ET, a minor hiccup came when the internet bidding was interrupted, putting the Fasig-Tipton team into a tailspin to ensure all buyers got through on various platforms.

As the final yearling marketplace, the October sale has become an important spot on the calendar for both buyers and sellers.

"I feel if you bring the horse, the buyers will find you," Zwiesler said. "It's nothing we do; it's how the horse is brought up. This sale is turning into a very nice sale, and I think people are keeping their babies longer, which was our case. I thought [hip 1107] would be a standout here."

Fellow consignor Archie St George said, "It's been vibrant trade, and based on September, probably not surprising. There are a lot of people here, and it's been like a lot of the sales where it's kind of gathered momentum as the sale has gone on. I hope we can stay around for another day. It's been a very vibrant, good trade - fun market to sell horses in."

"It's been a memorable three days, and I don't see why tomorrow won't be fantastic," Browning said. "We are going to shatter every record for October. We surpassed the record gross with another day of selling to go."

The final session of the October sale begins on Thursday at 10am local time (3pm BST).

FIRST PUBLISHED 9:58AM, OCT 28 2021
It feels good to be involved in an active, healthy marketplace