Coolmore go to A$1.5m to win enthralling bidding war for Not A Single Doubt colt 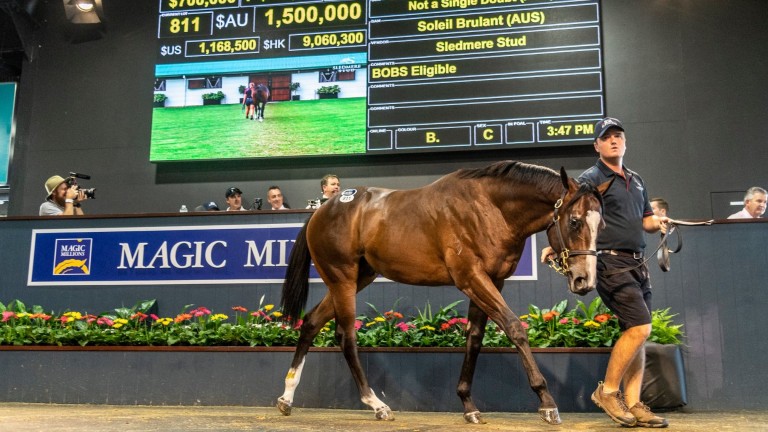 The session-topping Not A Single Doubt colt who sold to Tom Magnier for A$1.5 million
Darren Tindale
1 of 1
By Tim Rowe of ANZ Bloodstock News UPDATED 9:20AM, JAN 16 2021

Magic Millions has achieved a record sale in a remarkable set of circumstances with Saturday's final Book 1 session still to come after three colts made more than a million dollars on Friday, further justifying the company’s bold decision to increase the size of the catalogue for 2021.

Coolmore, the buyer of the two highest-priced lots sold on the Gold Coast so far this week, added to its valuable collection of expensive colts by securing a A$1.5 million (£851,000/€957,000) son of Not A Single Doubt after an enthralling bidding duel.

As bidding moved to A$1m, Magnier - standing alongside ally James Bester - was stationed at the back of the auction ring, with McGrath in their eyeline near the media office as Maher signalled his bids from the auditorium floor.

A price-tag of $1.5 million says it all about Lot 811 sold by @SledmereStud to @CoolmoreAus on behalf of @MustangRifa. The son of Not a Single Doubt presented like one of the genuine stars of #MMGC2021 and will now get every chance to prove his worth on the track. @mmsnippets pic.twitter.com/gW1jm57rBl

Seemingly out of the contest, McGrath returned to his chair as Maher made his move against the global powerhouse, further pushing the colt’s price higher before the Aquis Farm adviser re-entered the market at A$1.4m in the hope of landing their eighth colt by Not A Single Doubt for the week.

But when the Coolmore heavyweights bid on a horse, they are rarely beaten and so it proved again mid-afternoon, with Magnier signing for his third seven-figure lot in four days, led by the sale-topping A$1.9m Snitzel colt sold on Tuesday.

Magnier’s continued muscle at the top-end of the market was fuelled by a desire to capture potential stallion prospects as yearlings in the hope they can stand at farms in Australia, Ireland or the US.

“It’s a great family, he’s a great individual and he comes from one of the top farms in Sledmere,” Magnier said.

“Their yearlings just look incredible and Royston and Treen [Murphy] are great breeders and we’ve bought horses there before with a deal of success, so we will go back to the well again and hopefully we get a bit of luck.

“James Bester, I and the whole team really liked this colt, so he will go to Chris [Waller] and hopefully we will have a runner here in the [Magic Millions 2YO Classic] race next year.”

Catalogued as Lot 811, the Rifa Mustang-bred and Sledmere Stud-consigned colt is the first foal out of Soleil Brulant, who is a half-sister to Listed winner Harlem River. Further down his page is Coolmore’s Everest-winning first-season sire Yes Yes Yes and dual Group 1-winning sprinter In Her Time, who made A$2m as a broodmare at the 2020 Inglis Chairman’s Sale.

Sledmere’s Royston Murphy was elated with the result but admitted to some anxious moments in the lead-up to the colt’s sale.

He said: “It's always nerve-racking when you get a good colt like that. We have loved him from day one and he is by far the best horse I have ever brought to this sale.

“You have good expectations of horses, but it has been a hard sale to read. Some horses you think you might get a little overs and you don’t. Others, you think they are about the price and you get overs.

“He was a horse that everyone loved. You could not help but love him. He was just one of those horses. But to have an auction like that, with a bit of theatre. It was exciting and people were on and they were off.”

Later, a big-spending partnership overseen by Kitchwin Hills’ Mick Malone went to $1.05m for a Snitzel colt destined for Gerald Ryan, the trainer who prepared the champion stallion to Group 1 glory on the racecourse.

Offered by Newhaven Park as Lot 852, the grey is the second foal out of the Group 2-placed Supara, herself the daughter of the stakes-placed Unabated, whose six foals to race who all won.

“He is a beautiful horse, he’s a lovely, lovely colt and he is going to be raced by a group of guys to spread a bit of risk, so to speak,” said Malone.

“The minute I saw him, I loved him and we’ve had a bit of luck with the Snitzels. He just had that shape and that look and that Domesday cross, we know it works. He is from a really good farm.”

The colt’s demeanour was a big factor in the hot competition he garnered in the ring.

“Temperament is so important, so if they can keep walking around here [the parade ring] like they did the first time, it’s a big tick and he just rolled out every time,” said Malone.

“I don’t know if you saw him out the back here, but nothing fazed it. With that sort of money, you’ve just got to hope you’re on the right one.

“Gerald will be training - he was part of the whole thing and he was on the team - and there’s no better man than Gerald when he picks up a Snitzel.”

Newhaven Park’s John Kelly was “thrilled” to see the colt excel in the ring having bred and raced Supara.

He said: “It’s just such a great reward for all the people at Newhaven who put in so much. We have sold a few [million-dollar lots] and we have had a bit of luck up here, selling the odd horse for a bit of money. It’s a difficult thing to do.

“The Magic Millions team, led by Barry Bowditch and with Gerry and Katie [Harvey], are to be congratulated. There were many times in the last month where we didn't think we’d get here. I think it's great credit to them and their organisation.”

FIRST PUBLISHED 12:16PM, JAN 15 2021
It’s a great family, he’s a great individual and he comes from one of the top farms in Sledmere