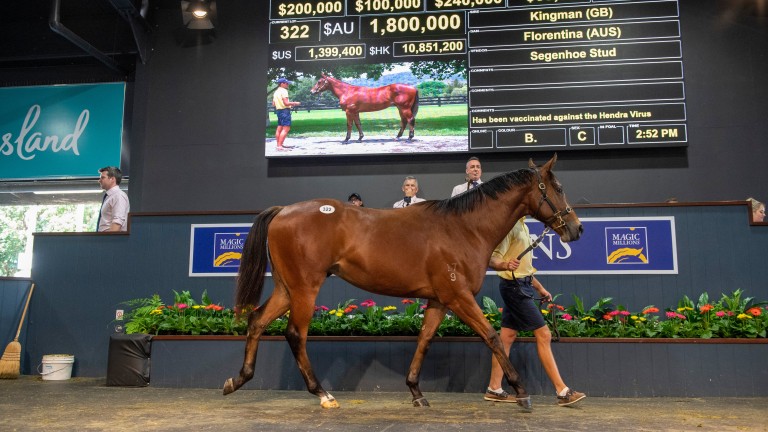 A colt born in the UK to southern hemisphere time by super European sire Kingman provided the benchmark on another extraordinary day of trade when selling for A$1.8 million (£1.02m/€1.14m) at the Magic Millions Gold Coast Yearling Sale on Wednesday.

Even the most bullish industry pundits and stakeholders did not predict, at least publicly, the insatiable appetite shown by buyers during the first two sessions of the seven-day auction, which resulted in four million-dollar lots being sold on Wednesday as the key metrics kept pace with the corresponding figures from the past two years.

While a colt by Not A Single Doubt broke the seven-figure barrier before midday, it was the son of Kingman who stole the show, his sale coming less than 24 hours after it was announced that the stallion’s owner-breeder, Juddmonte Farms founder Prince Khalid Abdullah, had died aged 83.

Segenhoe Stud’s Peter O’Brien, who offered the colt on behalf of his breeder Fairway Thoroughbreds’ John Camilleri, knew the son of Kingman would be a sales-ring star in Australia.

He said: “We knew he was going to sell well. We knew every one of the big buyers liked him, but you never expect them to sell that well.

“He was a beautiful colt by one of the best sires in the world from a very good racemare. I'm delighted he is going to Coolmore, because he’ll get every chance.

The colt is out of Australian Group 3-winning mare Florentina, making him a half-brother to the stakes-placed duo Villa Carlotta and Fasano.

O'Brien said: “All credit to John Camilleri - it’s a big swing to send a mare up there [to the northern hemisphere]. She went to Dubawi first and that filly sold for 475,000gns at Tatts, then she went to Kingman, and came back pregnant to Kingman, and he was at foot.

“He was born in England and came here to Australia about 12 months ago. John is a global thinker and he’s got paid for it. Coolmore looked at him plenty of times and they complimented him this morning about his temperament. He is absolutely bombproof. He has a great mind and I can’t wait to see him at the racetrack.” 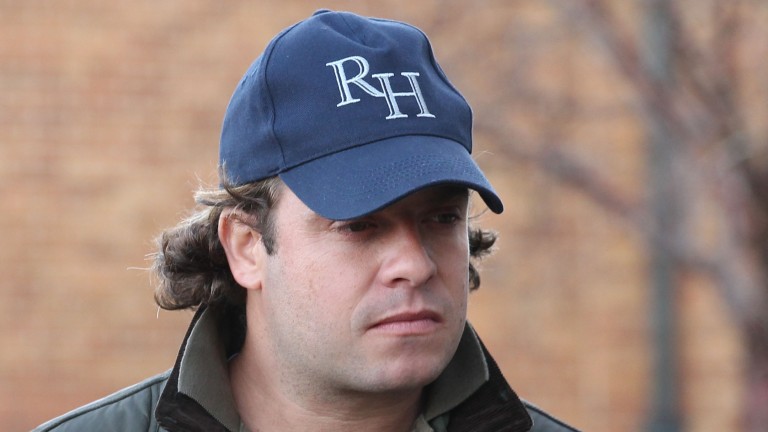 Tom Magnier: faith in Kingman down under
Tattersalls

Coolmore’s Tom Magnier, who also took home the A$1.9m Snitzel colt on day one, has faith in Kingman working in Australia.

“Segenhoe always has incredible horses at this sale, and we know what John Camilleri can breed,” Magnier said.

“You know when you see that Fairway Thoroughbreds brand on the horse, you have to take it pretty seriously.

“We know everything about how well Kingman is going at the moment. We have got Calyx at the farm by Kingman, who is going well. All the boxes were ticked for us.”

O’Brien is equally confident that Kingman can make his mark on Australian racing and breeding.

“The last time I looked he’d had three runners for three winners here in Australia," he said. "What I really liked about him was that he had two very good two-year-old winners in Japan two weeks ago and the Kingmans love fast ground.

“As I said, the bloodlines work and they should adore Australian conditions and there’s no reason why he can’t hit the heights he has worldwide in Australia.”

Trainer Chris Waller will be the lucky recipient of the colt. 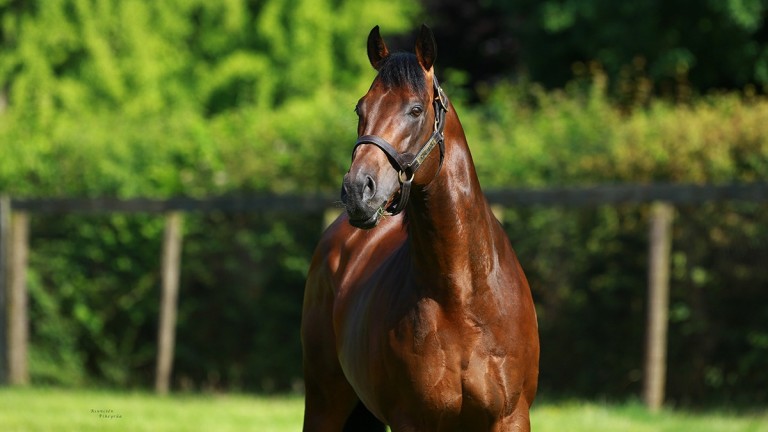 Earlier, Tony Fung and Phoenix Thoroughbreds, the partnership behind last year’s Golden Slipper winner and soon-to-be Kia Ora Stud stallion Farnan, reinvested in another son of Not A Single Doubt in the hope of repeating the on-track success, going to $1.1m to acquire him.

Aquis Farm managing director Shane McGrath said: “We are obviously unabashed fans of the sire. We were fortunate enough to secure Farnan from the same sales ring, and he was able to win the Golden Slipper. At the end of the day, that's the dream, to get him back for these big races.

“He's a straightforward colt. We liked everything about him and every time we looked at him he never turned a hair. He looks like he’ll be early and hopefully lightning can strike twice for us.”

The Torryburn Stud-consigned youngster is the first foal out of the Group 1-placed mare Denmagic. He will be trained by rising Sydney star Annabel Neasham.

“Most of these world-class sires, they tend to throw a type, and he was very much in that mould,” McGrath continued. “He's come off a great farm and he was extremely well presented. There is plenty of competition there, which you’d expect from a quality colt.

“Hopefully he goes on to make the mare for the breeder.”

Torryburn Stud manager Mel Copelin said: “I always thought, from the moment he was born, that he could make a million dollars, but everything has to work out. He has come here and it has worked out and I am absolutely stoked.

“Once I saw all the vetting come through, he’d certainly had enough inspections to be a million-dollar horse. He definitely has the best temperament and everyone can see that. He hasn’t turned a hair.”

Denmagic, who was purchased in 2018 from the Magic Millions National Broodmare Sale for A$350,000 by agent Ric Wylie, has a filly by The Autumn Sun and was covered by Exceed And Excel this season.

Two other colt syndicates registered their first blows of the sale on Wednesday, with agent James Harron Bloodstock landing a Shalaa yearling for A$1.15m and a son of Capitalist for $975,000. 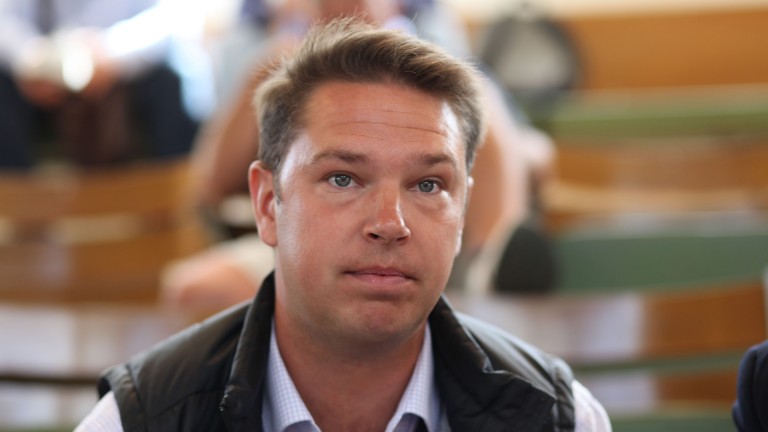 James Harron: underbidder on the Kingman colt but struck some meaty winning bids too
Laura Green

The newly-formed Victorian Alliance, led by Rosemont Stud’s Nigel Austin, also went to seven figures for a Zoustar colt after both outfits had missed out despite repeated attempts until a heated mid-to-late afternoon period of trade.

Harron’s biggest play of the second session was on the Shalaa colt, who is the second foal from the former Rick Worthington-trained ATC Widden Stakes winner Honesty Prevails. Ciaron Maher was the underbidder.

“Shalaa having a Breeders' Plate winner early in his career is very impressive,” Harron said.

“He's a very special colt with lots of quality and he comes off a great farm in Arrowfield. He was one of our must-have colts and we are delighted to get him.

“It’s a fantastic family and Honesty Prevails was a real star mare. Redoute's needs no introduction as a sire or a broodmare sire. It was a super result.”

Continuing his support of young sire Capitalist, who sported his dark green and gold epaulette colours to win the 2016 Golden Slipper, Harron bought the second-crop yearling, who is a brother to this season’s Lloyd Kennewell-trained Maribyrnong Plate placegetter Marine One.

He was offered by Newgate Farm, the home of Capitalist, and is the third foal out of Listed winner and Group 1-placed Golconda.

“He was very much like his father: very sharp, very precocious and I loved the way he handled the sale,” Harron said.

“He had a very good attitude towards everything, His brother, Marine One, has got some ability and has proven to be a handy horse.

“We’ve also got a nice Capitalist already on the team in Forbes, so that made us comfortable to have a shot in this guy.

“He's well-balanced, medium-sized, with a lovely depth of girth and just a really good, sharp, alert head. He’s a very nice colt, and hopefully he can go nice and early.”

Both of Harron’s acquisitions will be broken in at Kolora Lodge in Queensland before joining the Anthony and Sam Freedman stable.

The Victorian Alliance, who has enlisted the assistance of agents Suman Hedge and the UK’s David Redvers and Hannah Wall, helped provide Widden Stud with its second million-dollar yearling of the sale when the partnership went to seven figures for lot 332.

The colt, who was bred by Widden Stud and Longwood Thoroughbred Farm’s Michael Chrstian, is the fifth foal out of Western Australian Group 3 winner Fuddle Dee Duddle.

McEvoy said: “It feels like it’s been a long wait and we are rapt to be able to secure this colt. He was our number one after being in the Hunter Valley in mid-December and he is as nice a colt as we have been able to inspect this week.

“He is a sharper style of Zoustar and bred on a similar cross to Sunlight. He looks like a horse who will cope with the work and we noted what a great attitude he had all week. We saw him every day and he didn’t turn a hair, and I think that is important for a Zoustar.

“We had to stretch as is clearly evident in this sale. It is obviously a strong market, but we are over the moon to have this boy join our partnership.”

A trainer has yet to be decided for the youngster, with the Victorian Alliance directors to make that call at a later date.

FIRST PUBLISHED 3:58PM, JAN 13 2021
We knew every one of the big buyers liked him, but you never expect them to sell that well