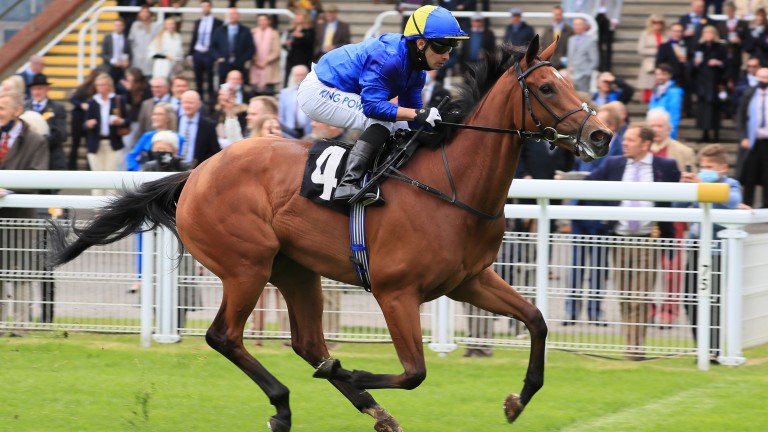 Flotus, winner of the Champion Two Yrs Old Trophy and second to Tenebrism in the Cheveley Park Stakes, will be offered for sale at the Tattersalls December Mares Sale next month.

The daughter of Starspangledbanner was an impressive winner on debut at Goodwood in May and, following three efforts in black type company, easily notched up her first stakes success at Ripon before a career-best effort behind Aidan O'Brien's star filly last month.

Bred by Newtown Stud and T J Pabst, the two-year-old was picked up by Glenvale Stud for €65,000 as a foal from Goffs before selling to Arthur Hoyeau for 125,000gns at Book 1 of the Tattersalls October Yearling Sale last year.

She is the fourth live foal out of Floriade - a winning daughter of Invincible Spirit and a full- or half-sister to two Group-placed performers in Lottie Dod and Travel Datuk - and a half-sister to five-time scorer Anyonecanhaveitall.

Trainers Simon and Ed Crisford said: “Flotus has been a joy to train. She is a sound filly with a good temperament. She performed at the highest level throughout her two year old campaign and she has the scope to train on as an outstanding three-year-old.”

Speaking on behalf of the owners, Hoyeau added: "Flotus is an exceptional two-year-old filly and has all the attributes to be a top class three-year-old.

"She is deservedly the highest rated two-year-old filly in Britain and a credit to Simon and Ed Crisford who have always regarded her as an exceptional talent. She will have huge appeal to owners and breeders from all over the world.”

FIRST PUBLISHED 2:01PM, OCT 15 2021
She will have huge appeal to owners and breeders from all over the world

Buratino to switch from Kildangan to Hedgeholme for 2022 Seven-figure frenzy as Waldlied tops December Mares Sale at 2,200,000gns Nick Bradley turns bargain buys into 1,945,000gns worth of December Mares stars Registrations open for visitors to the Irish Stallion Trail Half-sisters to Advertise and Tattersalls foal sale topper clash at Lingfield 'We have a long history' - Teddy Grimthorpe appointed as National Stud chairman