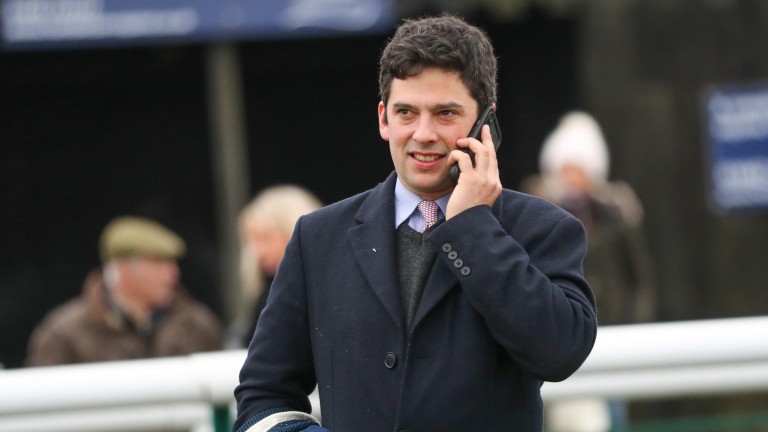 Oliver Greenall: "The main aim is to go hurdling with him and although he's not the biggest he looks like a tough staying horse who likes soft ground"
John Grossick
1 of 1
UPDATED 6:06PM, JUN 14 2021

The Goffs London Sale is now firmly established as the unofficial curtain-raiser to Royal Ascot week, but it was dreams of Cheltenham that helped fuel the bidding behind Monday's top lot as the rapidly improving stayer Zinc White fetched £310,000.

The promising youngster was the most expensive of three lots to sell, resulting in turnover of £680,000, while eight other lots were listed as either not sold or retained by their vendor.

Oliver Greenall and Dan Astbury combined to secure Zinc White, who has been declared to run in the Queen's Vase, although new connections will be hoping for a damp forecast between now and Wednesday's Group 2 contest.

The Ralph Beckett-trained grey showed glimmers of ability during three runs at two, but has returned an altogether more accomplished performer at three as he landed a gamble when making a successful reappearance at Wetherby before he took another sizeable leap forward to win a Sandown handicap by seven and a half lengths on his most recent outing.

"The main aim is to go hurdling with him and although he's not the biggest he looks like a tough staying horse who likes soft ground," said Greenall. "From what I've seen of him he looks to have a fantastic attitude and he's very likeable. If it rained we might run him at Ascot but it's looking slightly doubtful at the moment. If not he'll have a break and we'll get him ready for a hurdling campaign. 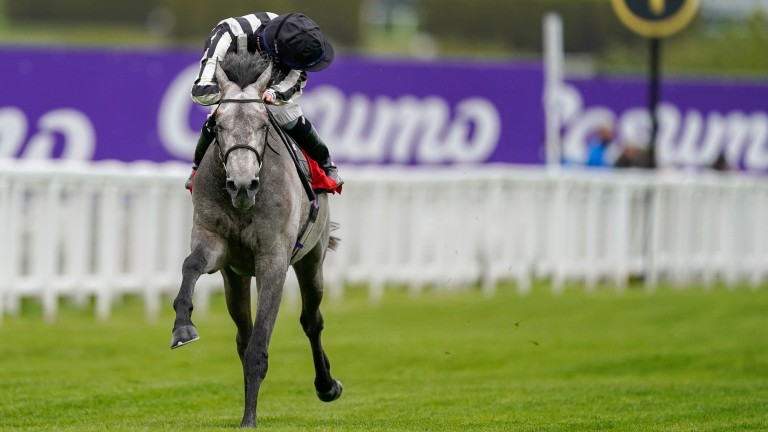 "We try and buy a bit of everything, stores, form horses, French, Irish but we've done well with horses off the Flat before so hopefully he'll have a great future with Cheltenham being the long-term aim. He's for a new owner in the yard who was very keen to have him so it was nice to get him."

The seventh edition of the London Sale switched from its traditional home in the grounds of Kensington Palace to a live online setting, with Nick Nugent and Kevin Blake on hosting duties at Kildare Paddocks and Henry Beeby wielding the gavel on the rostrum.

On the online buying experience, Greenall added: "It works well and it was very straightforward. It'll never be as good as doing it live when you can see everyone, it can be a bit harder to gauge the market, but it's a good substitute."

The six-figure transaction provided previous owners The Lucra Partnership with a handsome windfall, having secured Zinc White through Alex Elliott at €50,000 at the 2019 Goffs Orby Yearling Sale.

"The Lucra Partnership is Ralph and I's baby," said Elliott, who was among a select crowd of participants assembled at Daphne's restaurant in South Kensington. "We decided to buy five staying yearlings in 2019 with a view to them all being sold by the end of this year. The first horse we sold was New Mandate, who cleared the syndicate investment for us and went on to win the Royal Lodge Stakes. 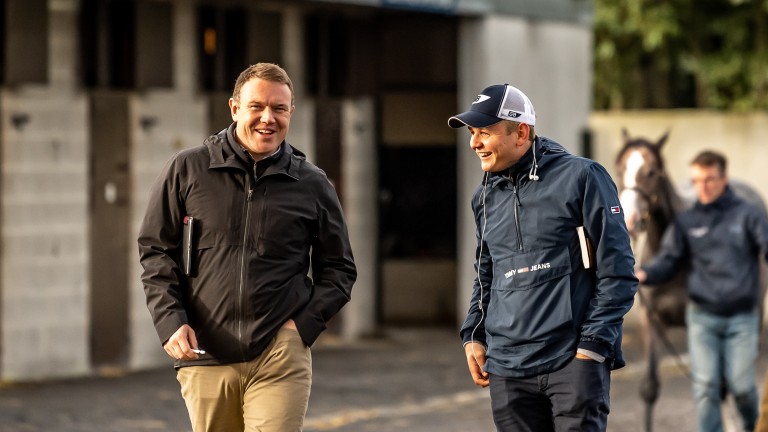 Alex Elliott (left): "For Zinc White to go on and be sold today is a little bit bittersweet because we think he's a very good horse"
Sarah Farnsworth/Goffs

"For Zinc White to go on and be sold today is a little bit bittersweet because we think he's a very good horse, but that's the programme we've put in place and it's a trading syndicate. Ralph and his team absolutely love the horse but it makes good economic sense when the yearling sales are around the corner.

"We've sold New Mandate and Zinc White and we still have Fleurman, who's in the same mould as Zinc White, to sell. I've got to say thanks to the syndicate members for supporting us. It's been a good journey and hopefully it can continue."

Bred by Lady O'Reilly's Skymarc Farm, the rapidly progressive three-year-old is from the first crop of Vadamos, the son of Monsun who switched from Tally-Ho Stud to Coolmore's Grange Stud for the current breeding season.

Zinc White is the sixth foal out of Chinese White, a daughter of Dalakhani who carried O'Reilly's famous silks to success in seven races, most notably the Group 1 Pretty Polly Stakes, a victory that saw her claim the title of champion older mare in Ireland in 2010.

Chinese White has bred four other winners including the classy Misty Grey and four-time scorer The Trader, who boast peak Racing Post Ratings of 113 and 101 respectively. In turn, Chinese White is out of Chiang Mai, a Group 3-winning Sadler's Wells half-sister to the increasingly influential Rafha, dam of Invincible Spirit and Kodiac.

The son of first-season sire sensation Ardad has won both starts for John Quinn, with victory in a Hamilton novice stakes followed by success in the bet365 Continental Two Year Old Trophy Conditions Stakes at Beverley.

Tipperary Sunset first changed hands at public auction as a foal, where JC Bloodstock signed the ticket at 15,000gns before Sean Quinn purchased the youngster for £17,000 at last year's Goffs UK Premier Sale.

"We're happy with the sale and he was a horse who deserved to make that sort of price based on what he's done on the racecourse so far," said Sean Quinn. "Michael Fitzpatrick, who I bought El Astronaute from a few years back, sold him as a yearling. 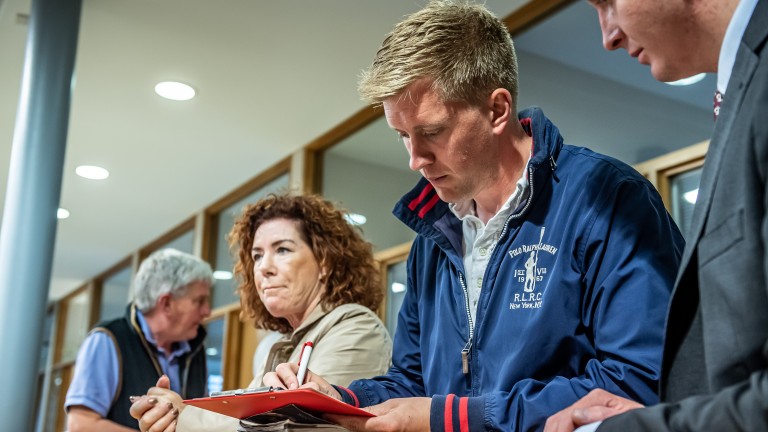 "The horse was on my list but when I walked into the parade ring Michael said the horse wasn't hugely popular and that he couldn't see why, and so I should follow him into the ring. A lot of the credit has to go to him as the horse has been very straightforward from that point on. I haven't had any correspondence with the new owner yet but I'm sure whatever he decides to do, the horse will do well for him."

One of 11 winners by Overbury Stud's Ardad, Monday's transaction sees Tipperary Sunset become his sire's most expensive offspring. He is out of the winning Dark Angel mare Cherubic, a half-sister to two stakes performers in Amazing Beauty and Humungous, while his third dam is the US champion two-year-old filly Phone Chatter.

McKeever on a Mission

The first lot to change hands was Military Mission, who was knocked down to Johnny McKeever at £170,000. Plans call for the son of Mastercraftsman to ship to Australia as McKeever revealed he was acting on behalf of the Gai Waterhouse and Adrian Bott partnership, although his purchase could still take up his Royal Ascot engagement if getting into the King George V Stakes on Thursday.

The progressive three-year-old has won one of his six starts for Hugo Palmer and was last seen finishing runner-up at Chester in May. The grey, who was previously owned by the Military Syndicate and Clodagh McStay, was making his third appearance at public auction, having been signed for by Brian Grassick Bloodstock at 65,000gns as a foal before failing to sell at €45,000 at the following year's Orby Sale.

McKeever said: "I've always bought a few with Adrian and Gai and over the years we've bought some good ones together including Knights Order, who won the Brisbane Cup at the weekend. Their team was keen to find another young horse to bring down and when I saw Military Mission at Hugo Palmer's last week I liked him a lot.

"He's by Mastercraftsman, who's the sire of Paths Of Glory and who's done very well in Australia having also been trained by Hugo Palmer. I spoke to Gai and Adrian and we agreed on a price and said we'd have a go at getting him. 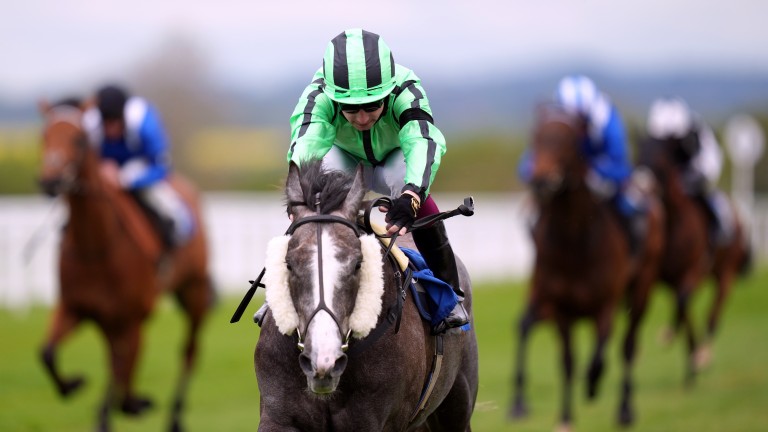 "I think he was well enough bought for the money he's cost so I'm very happy. I'm waiting to hear back from Gai and Adrian as to whether they want to have a go in the Duke of Edinburgh on Thursday, but if he's fit and ready then why not. After that he'll get ready for quarantine and probably fly out on the flight that leaves just after the July Sale."

Despite being based in Newmarket, McKeever and his wife Susie are familiar faces on the southern hemisphere sales circuit, with their Australian business in particular having given the couple plenty of experience of the online bidding platforms of the world.

McKeever said: "I've used the Inglis and Magic Millions platforms and I was underbidder on the top lot at Tattersalls recently on a horse called Classical Wave. They're all a bit different and I'm a bit of a technical dinosaur so I still find it slightly terrifying, but it seemed to work well today. I'm a bit old fashioned though so I'd much rather go to a sale with a catalogue in hand if I could!"

"Like every auction house we have embraced online sales over the last 18 months, but we hope that this year's virtual Goffs London Sale, which was conducted in the form of a live broadcast from Kildare Paddocks and London, broke new ground with its unique approach.

"We've always said that we judge this sale by different metrics and so, whilst selling three of the 11 lots offered would normally be a disappointment, the London Sale offers an opportunity for owners to cash in before Ascot or run at the Royal Meeting, and we wish existing and new connections every success over the next five days.

"That said, we sold horses to Australia, France and Britain which demonstrates the global appeal and reach of our totally unique London Sale. Of course next year we hope and pray that we're back in the beautiful setting of Kensington Palace Gardens sipping Chateau Léoube and rubbing shoulders with the who’s who of international thoroughbred racing on the eve of Royal Ascot."

FIRST PUBLISHED 5:03PM, JUN 14 2021
Hopefully he'll have a great future with Cheltenham being the long-term aim