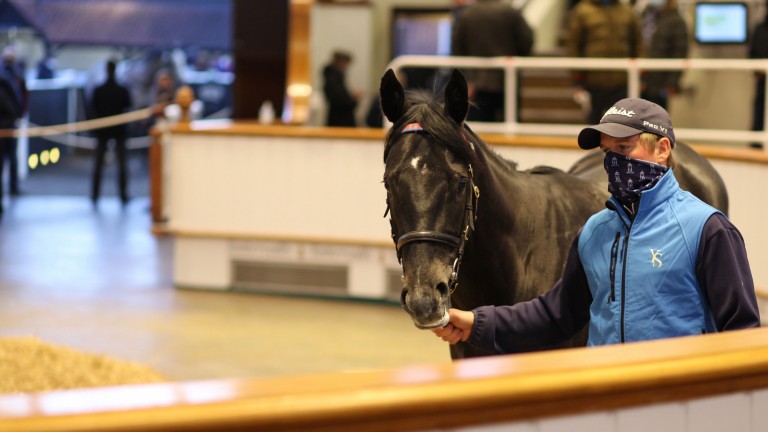 After a frenetic opening session, intensity levels settled down a touch on day two of the Tattersalls Craven Sale, with the market headed by 14 six-figure two-year-olds.

The most expensive offering sold on Wednesday was signed for by Alastair Donald, who went to 240,000gns for a colt from the debut crop of bullet sprinter Caravaggio. The Yeomanstown Stud-consigned colt is a half-brother to Group 2 Herbert Power Stakes runner-up Wall Of Fire, and is out of a daughter of Galileo and Cherry Hinton Stakes winner Jewel In The Sand.

"He's been bought for a new Hong Kong client so he'll head out there at the end of the season," said Donald from his position at the back of the auditorium. "He's a lovely horse with gorgeous movement, he's just a really striking individual and looks the type to do well in Hong Kong.

"He's well-bred and breezed very well for a big horse; he won't be racing until he's three so we didn't want something sharp and early." 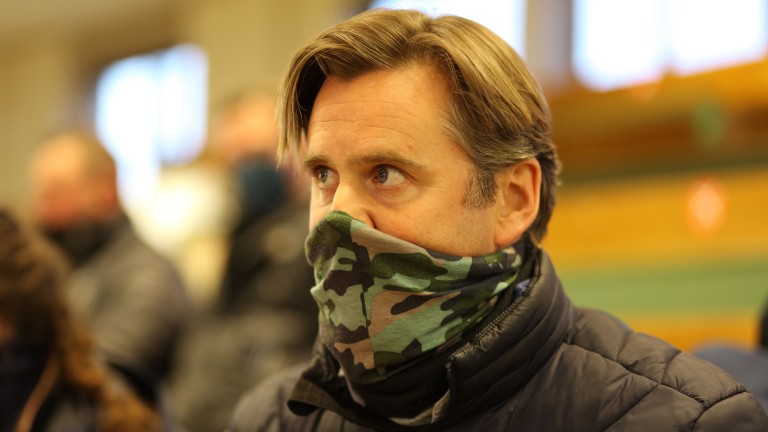 Alastair Donald: "He's just a really striking individual and looks the type to do well in Hong Kong"
Laura Green

The Sackville Donald agent added: "The sire looks like he's got a very nice two-year-old already in Tenebrism too. That the first I've bought by Caravaggio, although I liked the ones I saw as yearlings, they all seemed to have particularly good movement."

The colt belatedly returned some pinhooking profit for the Yeomanstown Stud team, who picked the youngster up at 155,000gns at the December Foal Sale before he was bought back at 130,000gns during Book 1 of the October Yearling Sale.

"Things didn't quite work out when we brought him back for Book 1, but he's a beautiful colt with a great attitude and he breezed really well so we're pleased," said Yeomanstown's David O'Callaghan.

"I've had three go through the ring and I've sold all three so I'm happy enough. [The market] feels a little softer tonight than it did yesterday but the clearance rate is still pretty good, so I think most people are pleased."

Day one's top lot, the 360,000gns Practical Joke filly bought by Alex Elliott for White Birch Farm, is set to return to the US for her racing career, and a similar future awaits day two's second-top lot after Sheikh Abdullah Almalek Alsabah signed for the Union Rags colt Tattered Flag at 185,000gns. 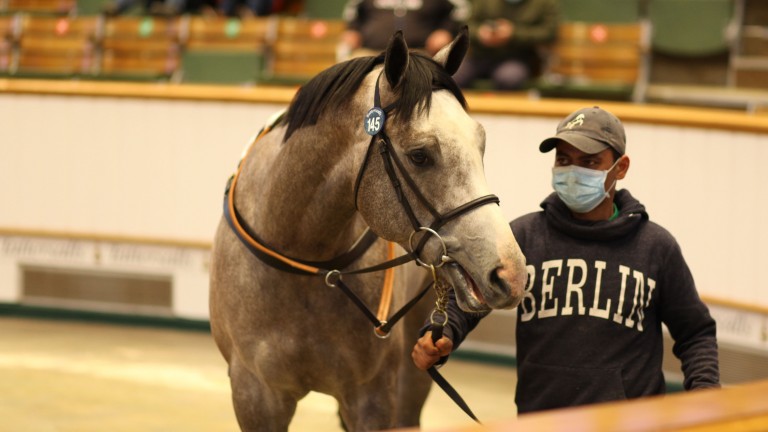 The Powerstown Stud-consigned youngster, who was signed for at $115,000 at Keeneland last year, is out of the US Grade 1 winner Careless Jewel.

Stuart Williams was on the scoresheet on the Rowley Mile when his two-year-old Desert Dreamer landed the opening fillies' maiden, and the Newmarket-based trainer was also on the mark at Tattersalls when going to 150,000gns for Tally-Ho Stud's son of Aclaim on behalf of Opulence Thoroughbreds.

The colt is out of the unraced Nayef mare Step Sequence, making him a half-brother to the Listed-winning sprinter Lady Penelope, who was offered at the Arqana Breeze-Up Sale in 2019 before joining Joseph O'Brien.

"We tried to buy a couple yesterday but weren't able to, but we really liked the way this guy breezed and he looks like he'll be able to run as a two-year-old," said Williams. "He's very athletic and a big, strong sort so he's got a chance of being a good horse. 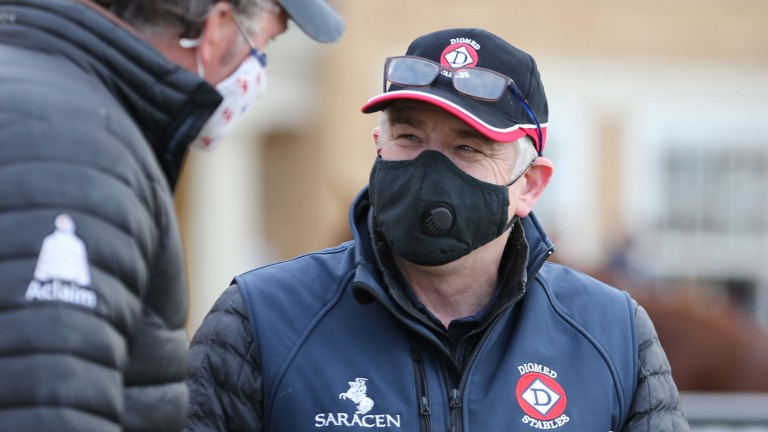 "Unfortunately you have to pay that sort of money for them! If he was by Night Of Thunder we probably wouldn't have been able to buy him, but Aclaim was a very good racehorse himself and was a good two-year-old, so fingers crossed."

The colt was making his third appearance at public auction, having first been signed for by Tally-Ho Stud at €95,000 at the Goffs November Foal Sale, before being bought back by his vendor at 68,000gns at last year's Book 1 of the Tattersalls October Yearling Sale.

Williams had also been in action on Opulence Thoroughbreds' behalf at the March Sale, when going to 60,000gns for the useful Huraiz.

Despite signing the six-figure docket, Williams said he was unsure whether the horse would be returning to his Diomed Stables or joining one of the other trainers on Opulence Thoroughbreds' roster. 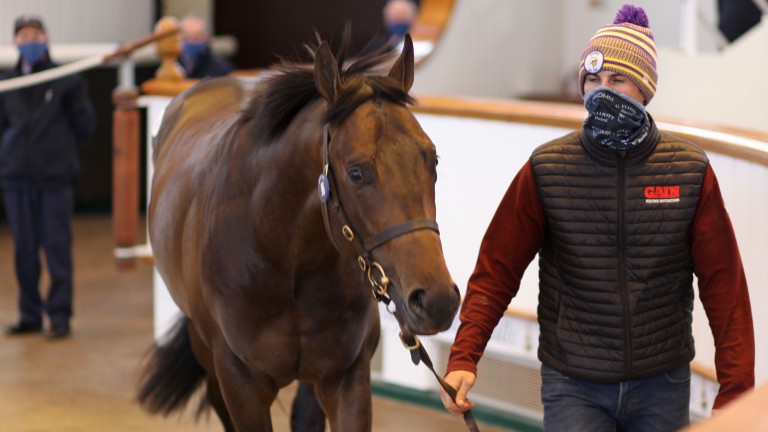 Lot 96: the Aclaim colt out of Step Sequence sells to Opulence Thoroughbreds for 150,000gns
Laura Green

"They've been buying for other trainers as well as me, I've just been helping them, but it isn't 100 per cent this horse will come to me," he said.

Around 30 lots later Williams added a Dark Angel colt to the Opulence Thoroughbreds string when going to 125,000gns for the half-brother to Feliciana De Vega consigned by Church Farm & Horse Park Stud.

The 150,000gns mark was hit for a second time during Wednesday's session when Stephen Hillen secured the Showcasing colt out of Swirral Edge offered by Katie Walsh's Greenhills Farm.

"He's a lovely physical who had a great action when he breezed and who came highly recommended by Tom," said O'Callaghan, whose past breeze-up buys include the likes of Steel Bull. "He'll probably get an easy month now and then we'll kick on with him, I'd say he's just going through a bit of a growth spurt at the minute."

The colt, who is out of the Super Saver mare Sky Saver and from the family of Grade 1 scorer Octave, was pinhooked by Whitehead at $75,000 at the Fasig-Tipton Kentucky Selected Yearlings Showcase.

O'Callaghan said he had seen only a limited number of youngsters by Practical Joke, who is standing the 2021 season at $22,500 at Coolmore's Ashford Stud, but said he had been impressed by the ones he had inspected.

"I've seen only this colt and the filly from Tally-Ho last night, and she looked exceptional, so I've liked the couple I've seen," he said.

That purchase took O'Callaghan's Craven Sale haul to four lots, acquired at a total outlay of 453,000gns. He added: "The market seems strong. We gave 190,000gns for a Dabirsim from Tally-Ho Stud last night and 100,000gns for a Profitable from Eddie O'Leary, but it's always strong when you're going after nice horses."

The progeny of Night Of Thunder continued to prove in high demand with buyers as Mark McStay of Avenue Bloodstock went to 125,000gns for a colt offered by Yeomanstown Stud. The colt is out of the Listed-placed Exceed And Excel mare Vitoria and was pinhooked by Yeomanstown at €120,000 at the Goffs November Foal Sale.

"He's a lovely horse and was my pick of the sale over the two days," said McStay. "I'm a massive fan of the sire, I bought Storm Legend by him at last year's breeze-up sales and he won first time out - and was John Oxx's last winner too.

"This horse breezed very well and came from a fantastic nursery in Yeomanstown Stud, they do a super job and he came very well recommended by David O'Callaghan. I actually remember the dam, Vitoria, Mark Wallace trained her many years ago and she was pretty quick.

"That gave me a little bit of extra encouragement to buy him. He isn't a horse who'll pitch up at Royal Ascot, he's one who'll take a bit more time, but he's an exciting horse and I'm thrilled to get him. He's been bought for an existing client and he goes into training with Hugo Palmer."

On the state of trade over the two days, McStay added: "I've been lucky and purchased two horses now, this horse and a nice Caravaggio for Joseph Parr who we bought yesterday.

"Like every sale I've been to in the last number of years, it's selective. It's highly competitive for the top horses but the middle and lower tiers are very tough on vendors. These breeze-up boys aren't only brave, they're also some of the best horsemen in the world and when they get a good one they deserve to get well paid."

Last year's Craven Sale took place around two months later than originally scheduled, meaning it was staged not only amid significant financial uncertainty brought on by the unfolding Covid-19 pandemic but, crucially, after Royal Ascot.

Back in its rightful pre-Ascot place and with a more stable economic outlook, the sale registered a positive set of figures.

Arguably the most encouraging metric, at least in terms of the immediate future, was the clearance rate, with 121 of 137 offered lots selling at a clip of 88 per cent, the highest clearance rate at a Craven Sale this century.

At the close of the sale, Tattersalls chairman Edmond Mahony commented: "We introduced the £250,000 Craven Royal Ascot/Group 1 Bonus this year, in addition to the lucrative £15,000 Craven Breeze Up Bonus and it is clear that owners have embraced these unprecedented bonuses.

"We have seen solid and diverse demand at all levels of the market from start to finish, which has produced the best Craven Breeze-Up clearance rate since 2000 and key indicators which have held up well, especially when taken in the context of the Covid-related challenges and restrictions which we are all still grappling with and which continue to hinder international travel.

"Nevertheless, to hear consistently positive feedback from owners, trainers, agents and consignors about the bonuses has been gratifying, and reinforces our commitment to exploring as many innovative ways as possible to reward owners who buy at Tattersalls with extra prize-money.

"There is no doubt that we will see plenty of this crop of Craven Breeze-Up graduates performing at a high level and it would be even more pleasing than usual if the Royal Ascot and Group 1 bonuses were won in the coming months."

He added: "Despite the prolonged difficulties with international travel, overseas buyers have again demonstrated their appetite for high class Tattersalls breeze up two-year-olds.

"Buyers from America, Bahrain, Dubai, France, Italy, Qatar, Saudi Arabia and Singapore have all been active, many of them using the live internet bidding platform, and as well as paying tribute to the consignors who have as ever presented an outstanding collection of two-year-olds, we must again commend everyone for their patience with the regulations and determination to overcome the obstacles we continue to face.

"We are still having to conduct sales under strict guidelines, but as well as looking forward to the forthcoming Guineas Breeze-Up and Horses in Training Sale, we are also looking forward to returning to more normality in the not too distant future."

FIRST PUBLISHED 9:34PM, APR 14 2021
He's very athletic and a big, strong sort so he's got a chance of being a good horse. Unfortunately you have to pay that sort of money for them!