Buyers in search of the next Honeysuckle at the Derby Sale 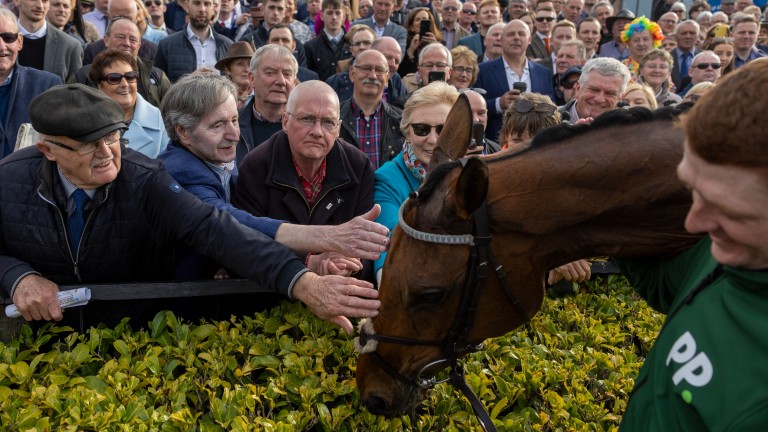 The catalogue for this year's Tattersalls Ireland Derby Sale is now online and features 390 horses for the two-day sale, which takes place on June 22 and 23.

Unbeaten champion Honeysuckle is the poster girl for Tattersalls Ireland's flagship store sale, where Mark O'Hare spotted the latent potential in the Sulamani mare back in 2017.

The first mare to win successive Champion Hurdles is not the only star of the season just gone to come through the Derby Sale; Cheltenham and Punchestown Champion Chase winner Energumene, Three Stripe Life and Jonbon, who both won Grade 1 novice contests at Aintree, the Irish Gold Cup winner Conflated and Shishkin are among those graduates of the sale who shone brightly.

This year's sale features a host of siblings to Grade 1 winners in a catalogue that buyers can really get their teeth into.

The Bleahen brothers enjoyed a fine start to the 2022 round of store sales with Liss House and Lakefield Farm among the top ten consignors at Tuesday's Tattersalls Ireland May Store Sale and the brothers' farms are powerfully represented in the Derby Sale catalogue.

Mighty Potter won Grade 1 novice hurdles at Leopardstown and Punchestown last season for Gordon Elliott, and his Kapgarde half-sister (lot 58) is offered by John's Lakefield Farm. She is also a half-sister to the Grade 3 winner and Grade 1-placed French Dynamite.

Michael Moore's Ballincurrig House Stud is a regular name among the top consignors and their draft this year includes a No Risk At All half-brother (72) to the star-crossed Grade 1 Spa Novices' Hurdle winner Brindisi Breeze.

The Dillon family send a Walk In The Park half-sister to last season's Irish Gold Cup winner Conflated (148) and to the Grade 1-placed Ordinary World to the Derby Sale, to sell through the Motherway family's Yellowford Farm.

Caroline Berry bred Grade 1 winner Battleoverdoyen and sold his Mount Nelson (260) half-brother at this venue as a foal for €55,000. He takes a second turn in the Fairyhouse sales ring, this time consigned by Flash Conroy's Glenvale Stud.

Jennies Jewel was a classy hurdler for Jarlath Fahey and Nathy McIntyre, who offers the second foal of the Grade 2 winner (3) who also claimed the Ascot Stakes at the royal meeting. A daughter of Flemensfirth, she was placed three times in Grade 1 contests and her second foal is a gelding by Shirocco.

All horses catalogued for the Tattersalls Ireland Derby Sale are eligible for the George Mernagh Memorial Sales Bumper at next year's Fairyhouse Easter meeting, which carries a prize fund of €100,000.

FIRST PUBLISHED 4:24PM, MAY 11 2022
This year's sale features a host of siblings to Grade 1 winners in a catalogue that buyers can really get their teeth into