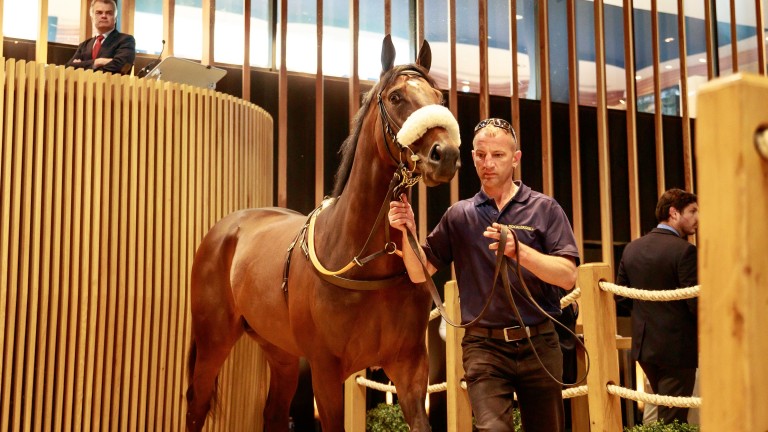 Mocklershill's Zoffany colt will head to Roger Varian after topping the sale at €550,000
Zuzanna Lupa
1 of 1
By Scott Burton, France correspondent UPDATED 1:32PM, MAY 14 2022

The spending power of Bahraini owners was once again demonstrated in Deauville as Oliver St Lawrence gave over €1 million combined for a pair of purchases late in the session.

At €550,000, lot 148 instantly became the late Zoffany's third highest sale at public auction and provided a great return for Mocklershill. An 80,000gns foal at Newmarket, the son of the Arcano mare Shortmile Lady failed to make his reserve as a Keeneland yearling but proved a real hit eight months later.

St Lawrence said: "Roger Varian saw this horse this afternoon and really liked him. He's a big, strong horse with a good shoulder on him and went very well - I think he did the ninth-fastest time - so hopefully he'll do well.

"He's for a friend and client of Fawzi Nass and Roger will train him."

That marked the lowest top price at Arqana since 2013 but trade was extremely solid overall, with the second-highest median in the sale's history at €100,000 and a clearance rate of 83 per cent.

Siyouni colt out of full-sister to Mecca's Angel delights

Following two years in exile, the first lot to break the half million euro barrier at Arqana's repatriated breeze-up sale on Friday was a Siyouni colt out of a sister to Nunthorpe heroine Mecca’s Angel and Group winner Markaz.

Longways' Michael Murphy gave 200,000gns at Tattersalls Book 2 last October but that mark was soon left behind, with St Lawrence once again holding sway at €520,000, as another high-priced purchase is set to represent Bahrain on the British stage. 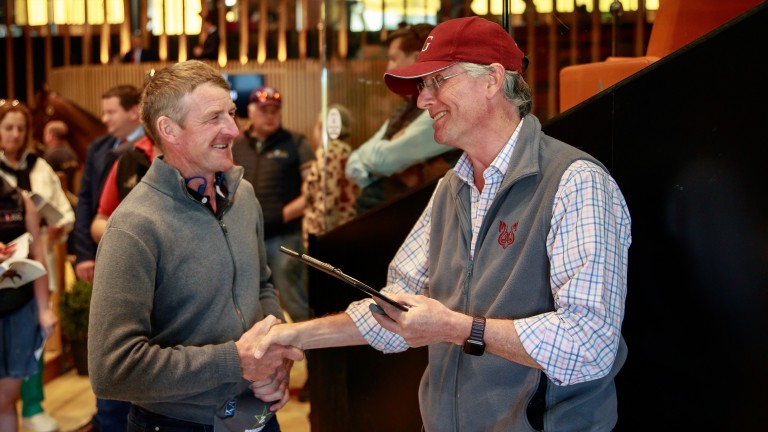 "He really caught my eye and I had to spend more than I had planned to get him,” said St Lawrence. "But it's a struggle to buy here today, it’s a very strong market.

"He's been bought for Fawzi Nass and friend, and will be sent to Charlie Hills."

Mecca’s Angel changed hands for a great deal more money when selling privately to Coolmore at the end of a storied racing career which netted owner David Metcalfe almost £700,000 in win and place prize-money.

'Intelligent' son of More Than Ready makes his mark

More Than Ready has been a breeze-up favourite for much of his remarkable 22-year stud career and his son offered by Grove Stud went the way of BBA Ireland's Michael Donohoe at €450,000. 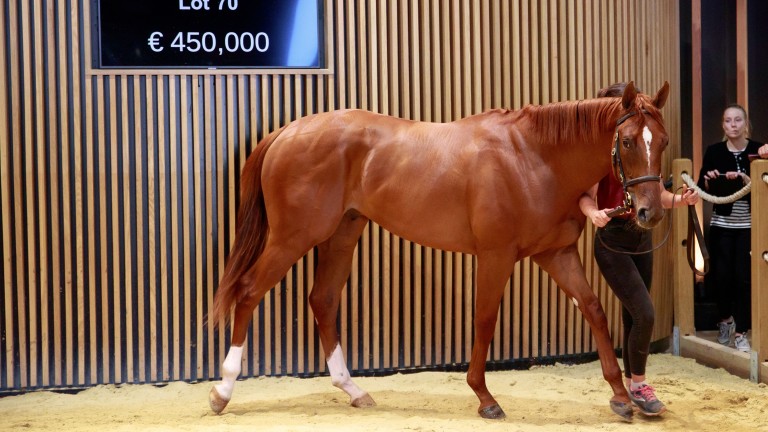 Michael Donohoe about Grove Stud's €450,000 son of More Than Ready: "I love everything about him"
Zuzanna Lupa

Grove's Brendan Holland gave $90,000 at Keeneland last September for the colt out of a Candy Ride half-sister to the talented Meal Penalty, and his American heritage was a clear attraction for Donohoe.

"He's a smashing-looking horse and very intelligent," he said. "He did a fantastic breeze and he has a fantastic temperament so we liked everything about him.

"He's for an existing client and, while plans are undecided yet, he looks the type that could race on the turf or the dirt. He's maybe more of a dirt-type horse so may end up in the Middle East."

The already-named Forever Rose, a Cracksman daughter of the Listed-placed Forever Beauty - herself a half-sister to Preis der Diana heroine Feodora - made it onto the leaderboard when Stephen Hillen and owner Dean Reeves struck at €420,000.

The Reeves colours were most famously carried by Breeders' Cup Classic winner Mucho Macho Man, while the sale was a notable success for Church Farm and Horse Park Stud, who picked up the filly for €49,000 at BBAG.

Hillen said: "I saw her on the farm in Yorkshire and really liked her. I think Cracksman could be a top stallion and he's being received really well already. 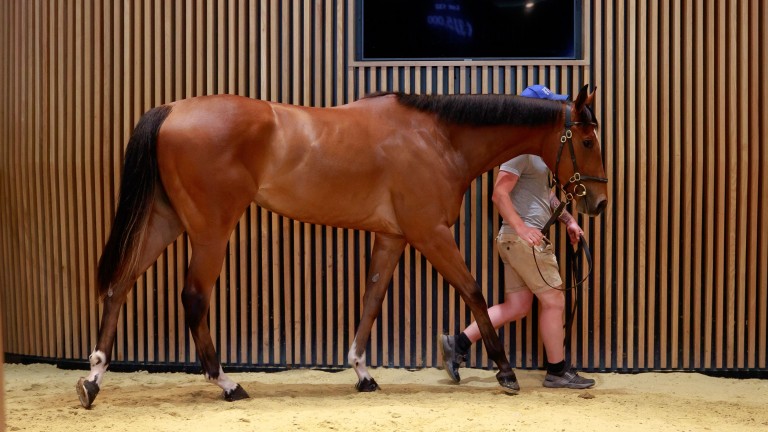 "This filly will probably go a mile and a quarter and I think she could be really good in New York."

Reeves was delighted with Hillen's efforts and will undoubtedly be eyeing the excellent NYRA programme for middle-distance turf fillies with his new acquisition.

"We really wanted a nice filly to send back to the States and she really fitted a lot of the criteria," said Reeves. "We think she could be really successful and the breeding is there for her as a future broodmare.

"We'll take our time with her and look forward to her later in the year. Christophe Clement is as good a trainer as you can find. He does a great job for us and Stephen does an excellent job in selecting the horses.

"We hope this filly will make us look pretty smart."

Ten Sovereigns is still in the early stages of his stud career and so memories of Coolmore's July Cup-winning son of Scat Daddy on the track remain fresh in the mind.

Ten Sovereigns set his buyers back £200,000 as a Book 2 yearling at Tattersalls in 2017 and Mocklershill will have brought his full-brother to the Deauville ring with ambitions to improve on that score. 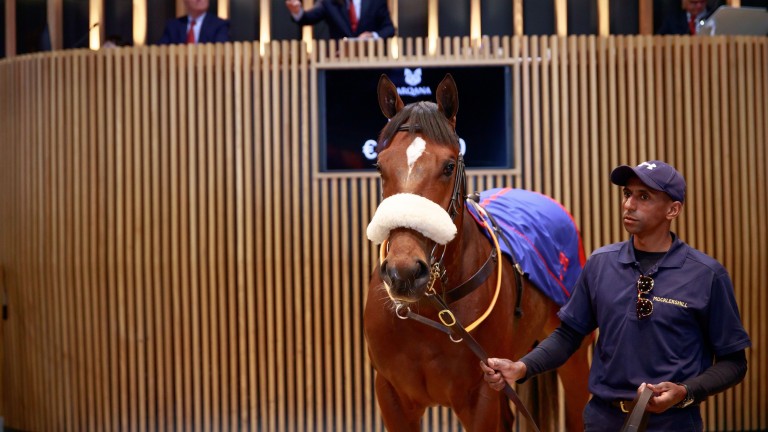 Peter and Ross Doyle were the last men standing at €350,000 for the colt, who it is not hard to imagine may be heading for the same home as his illustrious sibling.

Ross Doyle said: "He's a nice, big, strong horse, very typical of the sire. He's obviously very closely related to a very good horse. He comes from a very good nursery and is for an existing client, and he'll probably go into training in Ireland."

Dam Seeking Solace proved to be something of a bargain when bought out of Andre Fabre's yard for 65,000gns at Tattersalls 11 summers ago, the Exceed and Excel mare having finished placed in the Listed Prix de la Seine and fourth in the Group 3 Prix Penelope for Godolphin.

Coolmore can look forward to welcoming an Exceed And Excel filly who counts Cherry Hinton winner Asfurah as her third dam, while a different branch of the same family produced the extremely speedy Magical Memory.

Bidding on behalf of MV Magnier, Mandore International's Nicolas de Watrigant won out at €360,000 for the filly, presented by Tally-Ho Stud.

"We really fell for her," said De Watrigant. "Physically she stands out and she went well in her breeze, showing a lot of quality. And she's by a very good sire."

Barry Lynch signed at €70,000 for the filly at the Goffs Sportsman’s Sale last September.

John and Thady Gosden will train a €300,000 son of Sea The Stars, who set the tills ringing as just the second lot through the ring.

Standing in one of his preferred spots in the passageway to the right of the rostrum, Anthony Stroud secured the colt, who will carry the yellow and black stripes of Shaikh Khalid's KHK Racing. 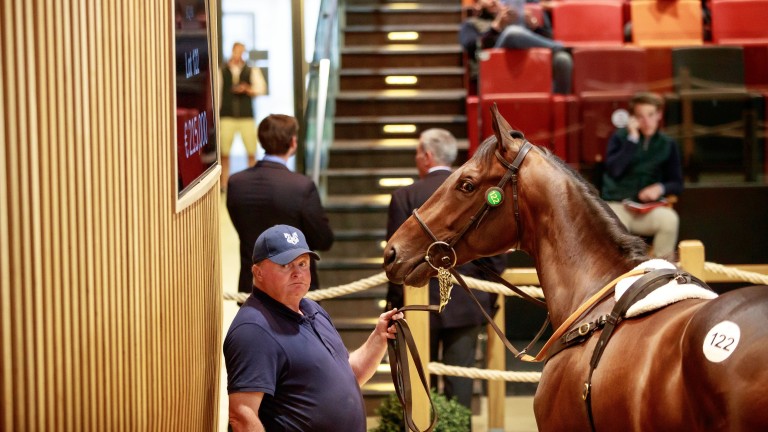 Anthony Stroud landed a colt by Sea The Moon from Powerstown Stud for €350,000
Zuzanna Lupa

Later in the session Stroud was again on the mark for a son of Sea The Moon consigned by Powerstown Stud out of the German-campaigned Listed winner Enjoy The Life.

The colt's full-brother Enjoy The Moon was also Group 3-placed in Germany and gained his Listed laurels in the Grand Prix du Nord at Chantilly.

"I really like the colt, he breezed very well and he's from an excellent family," said Stroud, who hinted that his client may consider sending his new purchase to Britain.

Curlin's stallion son Good Magic was responsible for a couple of high-priced sales, with agent Kerri Radcliffe pushed to €280,000 to acquire a chestnut filly from the Hill ‘n’ Dale resident's first crop.

Out of the Grade 2-winning Malibu Moon mare Luna Vega, the filly was well bought by Robson Aguiar for $145,000 at Saratoga.

And it was clear that the early buzz around the sire helped make up Radcliffe's mind.

"I spend so much time in America you can't miss everyone talking about the Good Magics," she said. "All the trainers and pre-trainers really like them.

"I bought him for Amo Racing, who are having a great time of things. She might need a bit longer, I think she'll be a summer filly.”

Radcliffe added: "I don't know but I'd say it's more than likely she could go back to America, but that's to be decided."

The second highest-priced Good Magic will certainly be on his travels, after Marco Bozzi also paid €280,000 for a chestnut colt marketed by Powerstown Stud. 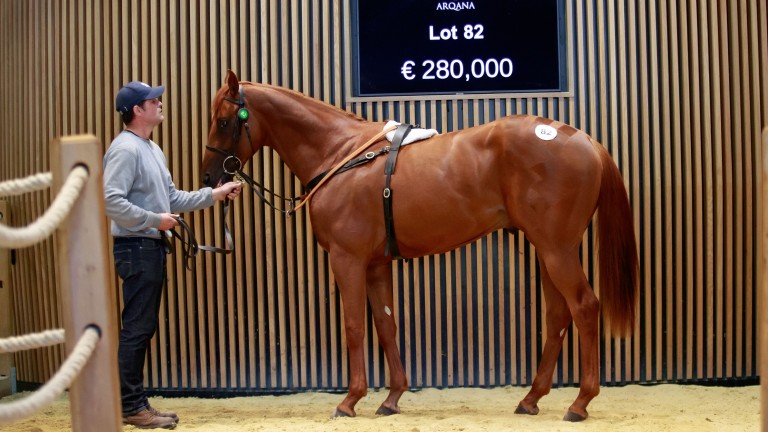 The second foal out of the Street Hero mare Vieja Luna - a real moneyspinner on the track - Saudi Arabia is set to be his new home.

Bozzi said: "We went around [a few farms] in Ireland last week and we saw the horse then. He's for a new Saudi client and this was the horse I absolutely wanted for him.

"He passed the vet, the pedigree is right and they love Curlin. He breezed unbelievably and is very fast. I bought two horses for the client in Newmarket and this might be the pick of the three."

At €380,000 Blandford Bloodstock secured a filly by Lanes End's prolific stallion Twirling Candy, consigned by Malcom Bastard. Dam Church Camp was a stakes winner herself and produced the prolific Mr Misunderstood, who topped off three Grade 3 successes with victory in the Grade 2 Wise Dan Stakes for Brad Cox. 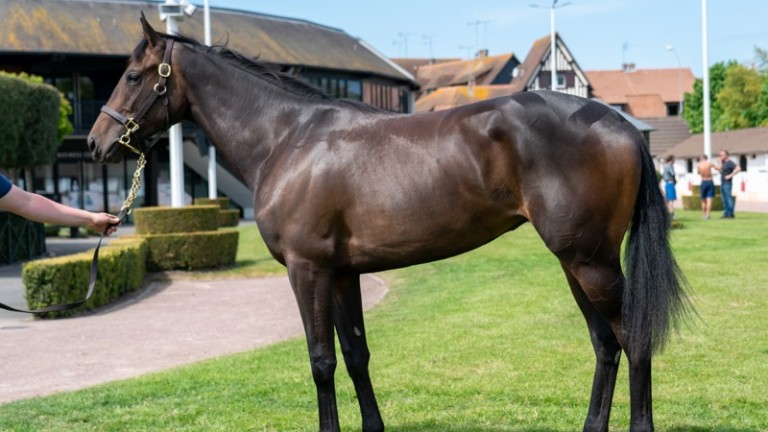 A filly bred to win a Breeders' Cup proved to be irresistible to agent Federico Barberini, who struck at €240,000 on behalf of Paul Dunkley.

By Juddmonte's Breeders' Cup mile hero Expert Eye, the Mocklershill-consigned filly is out of an unraced sister to Filly & Mare heroine Queen's Trust.

Barberini explained that he had been tracking the filly since last year and sees her as both a racing and breeding project.

"I thought she was a gorgeous individual and I remember her from the December sale at Tattersalls last year, when she really caught my eye," he said.

"She's done very well since then. I thought she did a wonderful breeze and I just love everything about her. She's from a very nice family and one day she will be a broodmare.

"The sire is doing well with his first two-year-olds and they all look like they have scope, they're not just one hit wonders. So everything adds up."

That €100,000 median and an average of nearly €132,000 gave credence to the firm's characterisation of a sale which more than fulfilled its remit for buyers and sellers.

"While there have been fewer fireworks than in past years, it has been a solid and professional sale," said Arqana's executive director Freddy Powell.

"You often here the word patchy used to describe the market, but an 83 per cent clearance rate and the second highest median recorded says otherwise."

"Many of these clients have been looking only at European breeze-ups over the last couple of years so this is the first time they will have seen Deauville," he said.

FIRST PUBLISHED 9:53PM, MAY 13 2022
Roger Varian saw this horse this afternoon and really liked him. He's a big strong horse with a good shoulder on him and went very well