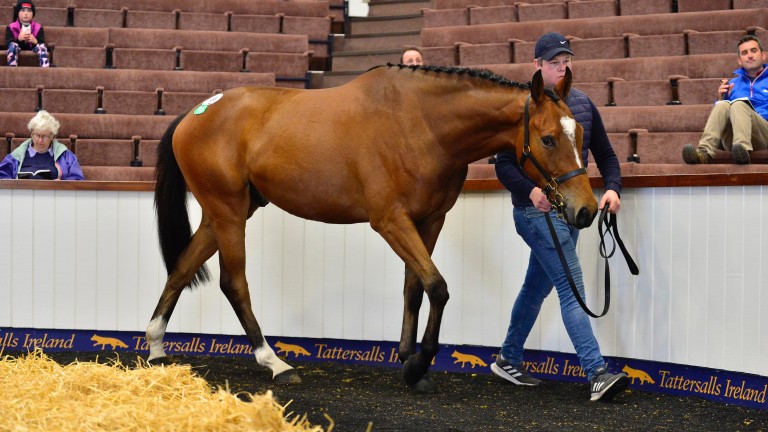 The Workforce gelding who became his sire's most expensive store horse
PAT HEALY
1 of 1
By Aisling Crowe UPDATED 8:40PM, MAY 10 2022

The European renaissance of Workforce is a growing force, with progeny from the second crop of the Derby and Arc hero in demand with buyers at Tuesday's Tattersalls Ireland May Store Sale.

In an echo of the sales complex itself which has undergone significant renovation and refurbishment, and received universal praise from all those canvassed during the day, Workforce's fortunes are also undergoing a transformation.

Repatriated in 2017 to Knockhouse Stud after a lacklustre stallion career in Japan, the son of King's Best has made a bright start to his second act.

His first Irish-bred crop have made that all-important positive impression on the point-to-point circuit and on the track, which has ensured that those following in their hoofprints are attracting more attention at the sales.

It is only the first round of the store sale season but already Workforce's second crop has exceeded the best prices achieved by last year's three-year-olds.

Colin Bowe purchased the most expensive gelding by Workforce in the sale, going to €48,000 for secure Rathyork Stud's offering out of a Presenting full-sister to Troytown Chase winner Riverside City. His second dam is the dual Listed-winning hurdler Blazing Sky, a daughter of Knockhouse Stud's former stalwart Beneficial.

Bowe said: "We have a nice filly by him [Southern Babylon, second on her debut earlier this month] and have been beaten by a few of them this season.

"They are going well in point-to-points and they look like they stay and jump. This horse is strong and scopey, with size about him, and out of a Presenting mare."

The other Workforce gelding to exceed last year's prices for his stock is also destined for the pointing field as he was bought by Harley Dunne for €42,000. 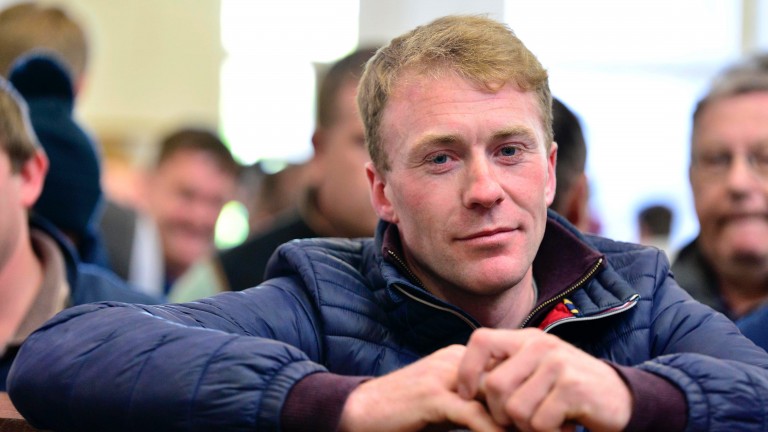 "They have been successful in their point-to-points and Workforce looks to be a good, solid, promising sire," said Dunne. "This horse is a lovely, big and beautiful individual, he looks a good chasing type.

"We will get him home, get him broken and get him a good summer of grass and go from there. Hopefully, he will be out next in a four-year-old point-to-point."

Consigned by Raheenduff Stables, he is out of the unraced Alflora mare Gaye Flora. Her dam is a half-sister to Racing Post Chase and Great Yorkshire Chase winner Simon and to the dams of Oulart, a Cheltenham Festival winner, and Freewheelin Dylan, who was successful in the 2021 Irish Grand National.

It was a healthy return on the €10,500 Jeremy English paid for him as a foal at the 2019 November National Hunt Sale.

Workforce had a total of six geldings sell from the eight stores that were offered, with the average and median figures significantly higher than that of the sale as a whole. His average of €28,417 was 78 per cent higher than the sale average and the median, at €25,500, was almost double the overall figure.

Although Affinisea had a racing career far removed from the glittering prizes won by Workforce, Whytemount Stud's son of Sea The Stars had the pedigree and looks to recommend him and the O'Neill family snapped up the three-parts brother to Soldier Of Fortune for stallion duties.

His first crop of four-year-olds have also been catching the eye in maidens and, as with Workforce, for the handlers forced to play second fiddle to Affinisea's progeny on the track, it is a case of if you can't beat them, join them.

That was the case for Denis Murphy, who bought the Knockalane House-consigned Affinisea gelding for €50,000. 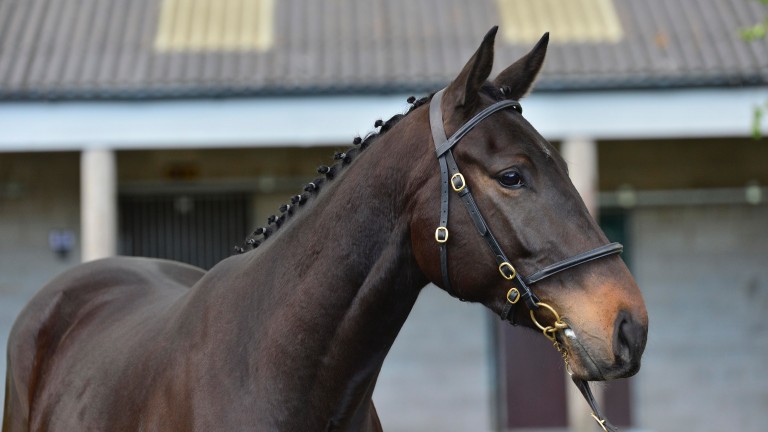 He said: "He is a gorgeous horse, very correct and a fine, big strong horse. He is one of the nicest horses here today. I haven't trained any by Affinsea yet but I've been beaten by a few of them."

It wasn't all about the identity of his sire though, as the eye of the Ballyboy Stables man was caught by the gelding's broodmare sire.

"I was a big fan of Jeremy and the fact that he is out of a Jeremy mare is a big thing for me, so please God the cross will work," he added.

The sale of Elizabeth Davies' February-born foal demonstrated that time, and maybe changed circumstances, can make an enormous difference to the sales ring experience. He was led out unsold for just €7,500 at last year's February National Hunt Sale but, 15 months on from that, the reception was completely different for the first foal of Knockalane Hill, an unraced half-sister to Grade 2-placed hurdler On Fiddlers Green.

Logan returns to France in search of more talent

Joey Logan has enjoyed plenty of success with the purchase of French-bred horses for his clients, most notably last season's dual Grade 1-winning novice hurdler Mighty Potter and Fil Dor, who was second to Vauban in three Grade 1 juvenile hurdles.

The agent, who is also involved in the point-to-point business, was shopping for himself on Tuesday and in that capacity bought a gelding by Haras d'Enki's Buck's Boum, sire of dual Gold Cup victor Al Boum Photo, from Liss House for €47,000. 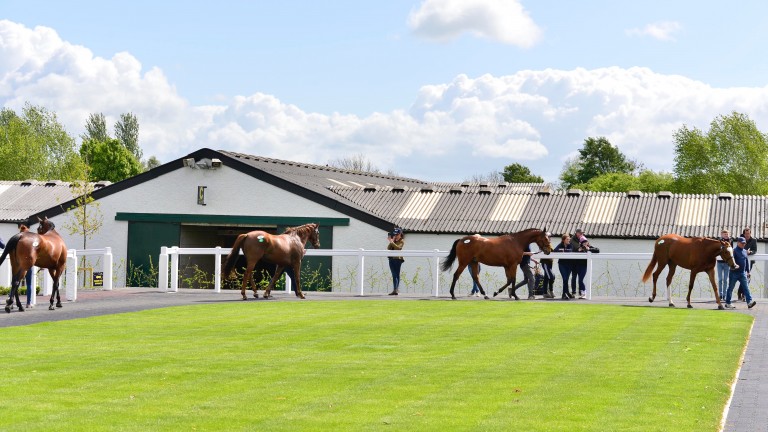 Logan said: "He is a racy type of horse, and I will bring him home and get him going before deciding if we go the point-to-point route or on the track with him, but he has plenty of options. He is out of a good mare so hopefully he will be lucky."

That description of his dam Urkashe as a good mare is not overblown as she was a multiple winner in France and second in the Listed Prix Rigoletto chase at Auteuil. J'Suis Kashe Bam's is the first foal produced by the daughter of Clety.

French fields are also familiar territory for the Bleahen brothers, who have sourced a significant number of their star graduates as foals in that country.

Grand National-winning jockey David Mullins has turned his attention full-time to the bloodstock side of the business and he was busy at Fairyhouse, signing for two of the day's most expensive horses.

Under his own steam, Mullins bought Clonmethan Farm's Well Chosen gelding for €42,000. He is the first foal out of Grange Hall, a daughter of Flemensfirth who was a winner over hurdles and fences. Grange Hall is one of two winners out of Odeeka, a half-sister to the Tara Hurdle, Christmas Hurdle and Galmoy Hurdle winner Celestial Wave.

Mullins won nine Grade 1 races in the saddle and is prospecting for Grade 1 winners in his current role. He teamed up with Ballycrystal Stables to purchase Rathturtin Stud's Blue Bresil filly, one of two daughters of Constitution Hill's sire in the catalogue.

Their €36,000 buy is the second foal out of Im Des Champs, an unraced daughter of Robin Des Champs. Her third dam, Southcoast Gale, is a Strong Gale half-sister to the brilliant Denman and Silverburn, who was a Grade 1 winner over hurdles and fences as a novice.

Yeats' best season as a stallion culminated in a first champion sire title for the legendary stayer. The Royal Ascot legend has sired a notable number of top-class daughters during his stud career to date, including Grade 1 winners Shattered Love and Augusta Kate, as well as Mount Ida and Heaven Help Us, who have been successful at Graded level. 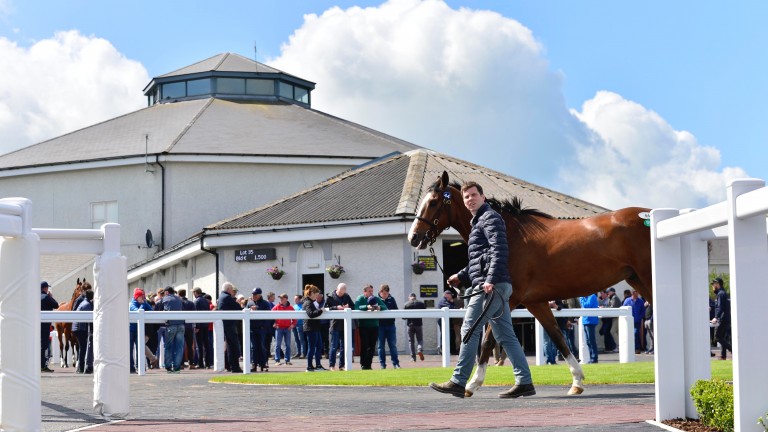 With such a record it's no surprise that fillies by the Castlehyde Stud resident are popular and Carheenlea's daughter of Yeats out of the unraced Beneficial mare Be Mine Again was in demand on Tuesday.

Recent Scottish Grand National-winning jockey Rob James and leading point-to-point handler Colin Bowe have teamed up successfully in the past to buy a classy filly at this sale, and James is hopeful that this €36,000 purchase can reach the bar set by Telmesomethinggirl, winner of the Grade 2 Mares' Novices' Hurdle at Cheltenham last year.

"She is a lovely filly with a lovely walk and a great outlook," said James. "The vendor does a very good job with the horses. She has been bought for myself and Colin Bowe and we really loved her.

"We've had some luck together with Telmesomethinggirl, who we bought from this sale. She will probably come back to me to be broken in and then maybe go to Colin's then."

The pair struck late in proceedings for a filly by Burgage Stud's Jukebox Jury out of mare by the farm's former star sire Bob Back. Consigned by Mount Brown Farm, all three of the filly's half-siblings to race have won, with the Beneficial gelding Ben Dundee, second in the Grade B Paddy Power Handicap Chase at Leopardstown last Christmas, earning a Racing Post Rating of 152.

Their €40,000 purchase is a granddaughter of Deep Estee, a Supreme Leader full-sister to Dr PJ Moriarty Chase winner Nick Dundee and a half-sister to Irish Champion Hurdle winner Ned Kelly.

Following two Covid-interrupted years, the sale returned to its original May date and posted returns that were broadly in line with its earlier incarnations.

Last year's renewal, which was held in August, was bolstered by a strong wildcard selection of horses that missed dates at other sales, and that served to drive turnover to a record level for this young sale.

However, this year's smaller catalogue still managed to post the second highest aggregate figure in the sale's five-year existence, with the figure of €2,704,400 down just five per cent on the 2021 record.

Tuesday's average of €16,390 dipped by a similar level to the aggregate, down six points year-on-year, while the median of €13,000 showed a decline of 13 per cent from last year's sale.

FIRST PUBLISHED 8:32PM, MAY 10 2022
They are going well in point-to-points and they look like they stay and jump