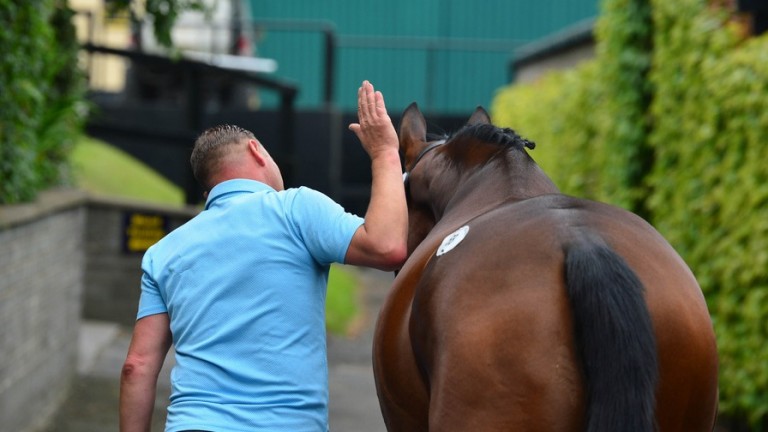 As soon as the vantage points begin to fill at Tattersalls Ireland, it is the signal that those assembled should standby for fireworks as buyers position themselves in their favoured spots in good time for the arrival of a star lot.

The crowd on the opening day of the Derby Sale surged in anticipation of Lakefield Farm's Kapgarde filly with an outstanding pedigree, catalogued as lot 58, and the sense that something special was about to take place filled the air.

Bidding opened at six figures for the beautiful bay, whose coat reflected the summer sun in her dapples, and it quickly rose as bids flew in from all areas of the amphitheatre.

Joey Logan, who is well-acquainted with the filly's family having purchased her Martaline half-brother Caldwell Potter for €200,000 last season on behalf of Andrew and Gemma Brown, owners of her Grade 1-winning half-brother Mighty Potter, was in prime position to win the battle for the filly until Eddie O'Leary entered the fray.

O'Leary was standing with Gordon Elliott and Mouse O'Ryan when he indicated a bid of €310,000, an intervention which proved decisive and that sole bid secured the Kapgarde filly for Elliott's Cullentra House Stables.

"She looks a star and was one of the picks of the sale for us. Hopefully she will be lucky and as a broodmare she has a lot of residual value, too, but we will worry about racing first!" 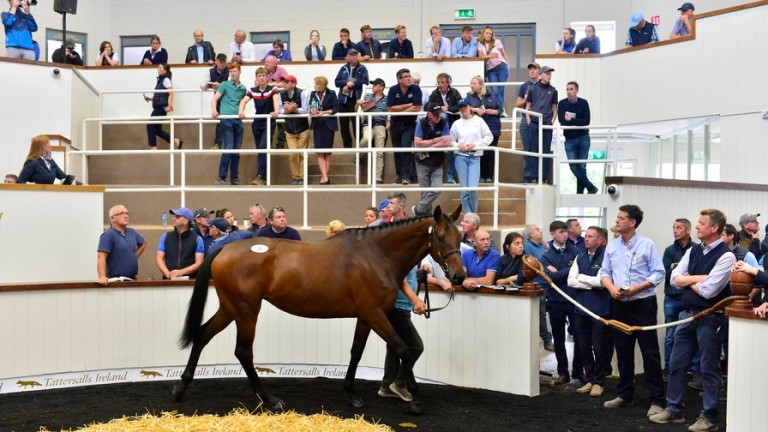 Elliott also trains Caldwell Potter for the same owners as Mighty Potter and regards her as resembling the Grade 1 winner more than his younger brother.

"She is more like Mighty Potter than Caldwell Potter, she looks like she will be nice and hopefully she will be lucky," he reiterated.

The filly is also a half-sister to the Grade 3 Pierce Molony Novice Chase winner French Dynamite and to the Grade 2 Limerick Hurdle third Indiana Jones. They were bred by Francois-Marie Cottin out of the Laveron mare Matnie whose dam is a half-sister to the Auteuil Grade 3 winner and Grade 1-placed mare La Grande Dame and to Aupcharlie who was third in the Champion Bumper at Cheltenham and second in the Grade 1 Fort Leney Novice Chase for the late Ann and Alan Potts.

John Bleahen of Lakefield Farm previously sold the 2015 Derby Sale topper, a Robin Des Champs gelding who made €320,000 to Harold Kirk and Willie Mullins. The Galway native was quite emotional when speaking in the wake of another excellent result.

"She was bought privately from her breeder Mr Cottin who is a very nice man and a great breeder. He is in his 80s and he has retired since we bought this filly," Bleahen explained.

"I bought her with my brother Niall and we were very lucky to have hit on her. The family has developed since we bought her and it is wonderful to have such interest in her. She never stopped here and she never turned a hair. She was shown by Dermot Clarke and he is just the best showman in the world," added the delighted seller.

The price she achieved is the highest at the Derby Sale since 2018 and she is the most expensive filly to go through the ring at this sale in 16 years. Her €310,000 price tag makes her the most expensive store sold so far in 2022.

Kapgarde's stock were in huge demand at Tattersalls Ireland on Wednesday with Haras de la Hetraie's sire of the reigning Gold Cup champion also responsible for the opening session's most expensive gelding.

Both the vendor and the purchaser of Lot 174 have enjoyed success in their respective roles with Kapgarde's progeny; Norman Williamson sold the 2017 sale-topper by Kapgarde to Tom Malone, who turned out to be the Grade 2 Webster Cup winner Sizing Pottsie and Malone's client for this particular gelding, Paul Nicholls, trains multiple Grade 1 winner Clan Des Obeaux, the sire's second highest rated chaser on Racing Post Ratings.

Malone, who bought the gelding on a single bid of €185,000, had saved the finest wine for the last when showing Nicholls his selections.

"Paul fell in love with this horse when I showed him to him this morning. I had ten horses to show him and left this one until last, there is method in the madness!" he laughed. "When he saw him, he said that he was the one so I am delighted that we were able to buy him."

The trainer is familiar with the gelding's family as well as his sire as he is out of an unraced Yeats half-sister to Tatenen who won the Grade 2 November Novices' Chase at Cheltenham and was second in three Grade 1 contests for Nicholls and the Stewart family.

This Kapgarde gelding will go to Will Biddick to begin his career and will sport the silks of Graeme and Yvonne Brooks when he takes to the track.

Malone also bought a Blue Bresil gelding with Nicholls for €120,000. From the family of One Man and Bellshill, he was consigned by Rathbarry Stud where his sire resides.

The agent teamed up with Jonjo O'Neill to buy another six-figure offering by the sire of Constitution Hill. Offered by the Bleahen Brothers, who between them were responsible for three of the six most expensive horses on day one of the sale, he is a half-brother to the ill-fated Elle Est Belle, a three-time Listed winner who was placed in last year's Champion Bumper for Dan Skelton. 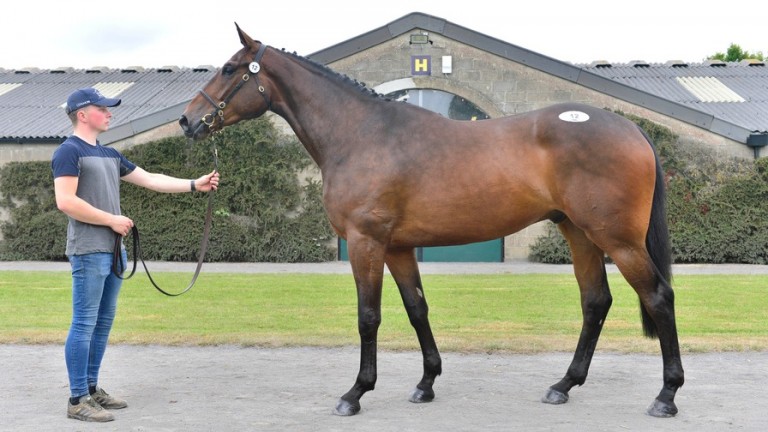 "We have some four-year-olds at home by the sire and they are nice sorts," said O'Neill. "The sire is going well and the mare had already done it, too."

The Bleahen brothers were front and centre of the action at Fairyhouse on Wednesday with John's Lakefield Farm and Niall's Liss House topping the consignors' charts.

Lakefield, which consigned the session's most expensive horse, ended the day with the highest total sales of €550,000 while Liss House's offerings commanded the best average price at €107,550 from four sold. 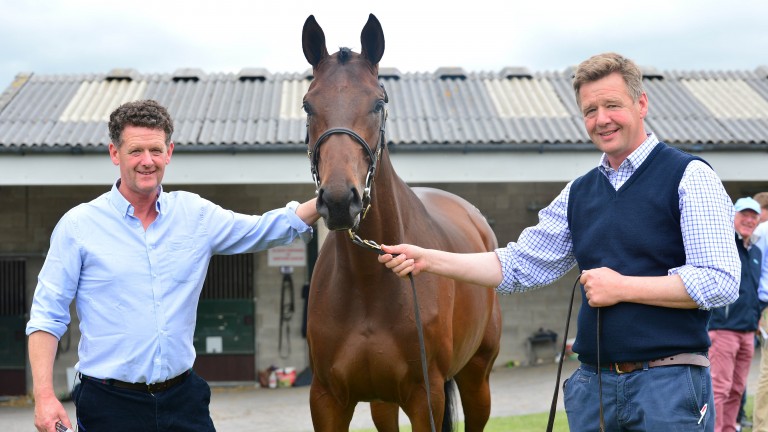 The Bleahen brothers with their Kapgarde filly who made €310,000
Tattersalls Ireland

A half-brother to the Listed-placed hurdler Saint Pierrot by Della Francesca, he is out of the unraced Robin Des Champs mare Soif D'Aimer, who has produced two winners from four runners to date.

Macauley commented: "He is a lovely horse by a proper sire and the mare has already produced a good horse. He will be trained by Matty, and if he can win his point-to-point he will be very valuable."

Magnier on the double

MV Magnier struck for two well-bred fillies during proceedings with both of them earning six-figure prices. The most expensive of them was Johnny Collins' Flemensfirth half-sister to Porthill, who recently made £250,000 to Harold Kirk and Willie Mullins following his debut second in a four-year-old maiden at Fairyhouse in April.

“She’s a lovely filly by one of the great National Hunt sires in Flemensfirth so we were delighted to get her and her own-brother, Porthill, showed a lot of promise when he was placed in his only point-to-point run in the spring," remarked Magnier, who went to €160,000 for the filly. 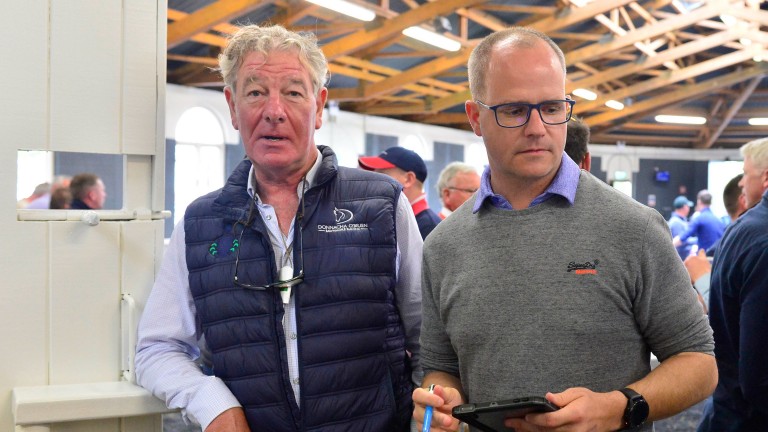 He co-signed for her and the €100,000 Walk In The Park filly consigned by the Bleahen Brothers' Liss House with Linda Shanahan. Lot 125 is from the family of Rhinestone Cowboy who carried the Magnier navy blue silks with distinction, winning the Grade 1 Aintree Hurdle and Tipperkevin Hurdle under Magnier's older brother JP.

Of the reasoning behind the decision to spend so much on fillies, Magnier saod: "Nowadays there are so many opportunities and incentives for people to get involved in National Hunt fillies which is great to see. The options for them are much greater than they used to be so it makes a lot of sense to invest in fillies  and as well as that the sales in recent years have shown that these fillies have great residual value when their racing careers are over."

Walter Connors' forays into France have borne fruit over the years and the latest results of his buying trips to French farms returned a pair of €115,000 sales.

The first of the geldings to come under the hammer was a son of leading French sire Doctor Dino out of the winning Majorien mare Magic Danse. Named Magic Dino, he was knocked down to Mags O'Toole and his dam is a half-sister to the Grade 1 Gran Corsa Siepi di Milano Hurdle winner Anaking and to Saint Palois, a Grade 2 and multiple Grade 3 winner at Auteuil who was also placed in the Prix la Haye Jousselin and Prix Ferdinand Dufaure, both Grade 1 contests. It is the further family of this year's Grade 1 Grande Course de Haies d'Auteuil winner L'Autonomie. 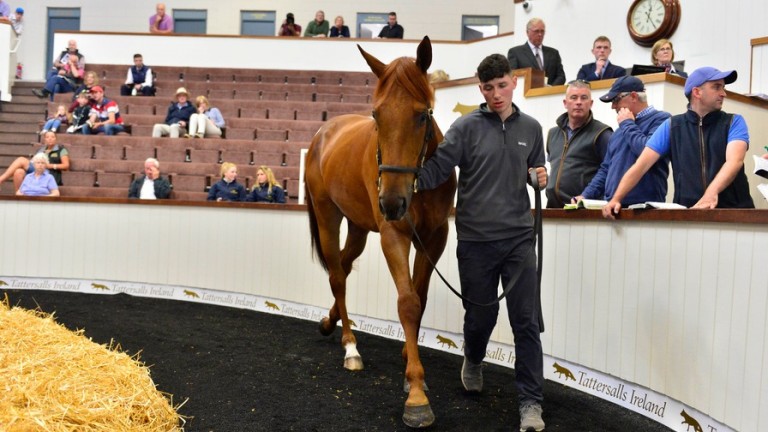 Almost 80 lots later came a gelding by Saint Des Saints with a high-profile pedigree and the looks to match. He is a full-brother to Elfile, successful in the Grade 3 Quevega Mares Hurdle and placed in two Grade 1 hurdles including the David Nicholson Mares' Hurdle for Willie Mullins and Kenny Alexander.

Bought by the Monbeg team, he is out of Rapide who has a perfect strike-rate with four winners from four runners so far. She is a winning Assessor half-sister to Auteuil Listed winner Vladimir by Saint Des Saints and to Parade, the dam of Grade 1 Sefton Novices' Hurdle winner Gelino Bello, who is also by Saint Des Saints.

Roaring trade on the opening day drove the sale to record gains on the back of 16 lots making €100,000 or more.