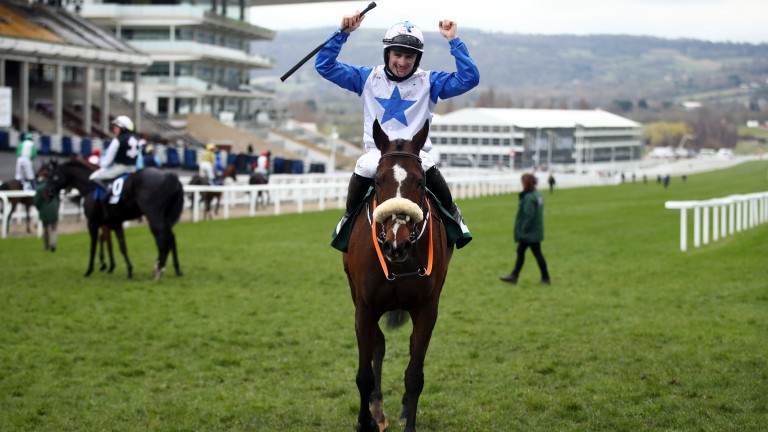 Last season's Cheltenham Festival and Grade 1-winning hurdler Belfast Banter will continue his career in the United States after selling to David Mullins for £130,000 at ThoroughBid's online auction on Tuesday evening.

The son of Jeremy was a high-class performer for Peter Fahey and Direct Bloodstock Limited, winning the County Hurdle and Top Novices' Hurdle at Cheltenham and Aintree in the spring. He is entered for this Saturday's Grade 1 Betfair Fighting Fifth Hurdle but will not be heading to Newcastle.

Fahey said on Wednesday: "Belfast Banter won't be staying in the yard, he has been sold to race in America and will not run in the Fighting Fifth. We wish David Mullins and his new connections the very best of luck with him."

Mullins added: "He's been bought on behalf of a leading US jumps owner. There is a really good programme there for that sort of horse and the prize-money is excellent so he has the chance to hopefully win multiples of his purchase price."

Having won his second bumper for Dan Skelton in July 2019, Belfast Banter broke his maiden tag over hurdles for Fahey the following October at Galway before picking up his first bit of black type when second in the Grade 2 Paddy Power Betting Shop Novice Hurdle at Navan in February.

Belfast Banter cemented his growing reputation with a clear-cut win over reliable yardstick Petit Mouchoir in the County Hurdle before going on to take the Top Novices' Hurdle at Aintree three weeks later.

The six-year-old, a graduate of the Tattersalls Ireland November Sale, Goffs Land Rover Sale and Tattersalls Cheltenham April Horses in Training Sale, is the second foal out of the Simply Great mare Sumtin Nice, who ran in but failed to complete two point-to-points.

Sumtin Nice is a half-sister to Grade 3 William Hill Trophy Handicap Chase scorer Dun Doire and dual winning hurdler Elbow High. Her Soldier Of Fortune four-year-old, Fine Margin, was fifth on his point debut at Dromahane this month, while her colt foal by Jet Away sold to Peter Nolan for €20,000 at Tattersalls two weeks ago.

FIRST PUBLISHED 11:20AM, NOV 24 2021
Belfast Banter won't be staying in the yard, he has been sold to race in America and will not run in the Fighting Fifth