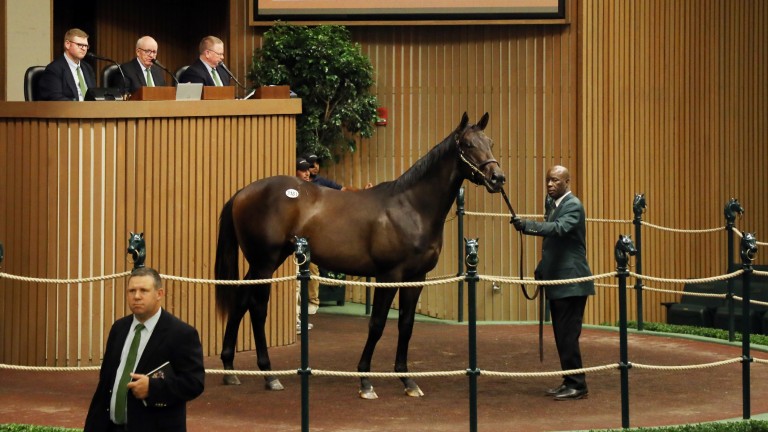 The Keeneland September Yearling Sale Book 5 opening session saw fireworks come at the end of the day after a colt by Violence realised $220,000 from James Zahler, bidding over the phone. Woods Edge Farm (Peter O'Callaghan) consigned the pinhook as hip 3181.

The session was topped after Woods Edge Farm sent their pinhook through the ring, seeing the colt by Violence command top honours from Zahler bidding over the phone with Joseph Mills.

The colt is out of the unraced Sharp Humor mare One Hot Senorita, a half-sister to Nicole H, by Mr. Greeley, a Graded winner in the 2011 Distaff Handicap at Aqueduct and placed in the 2012 Princess Rooney Handicap at Calder. Lynn Jones and Kathy Jones bred the son of Violence in Kentucky. 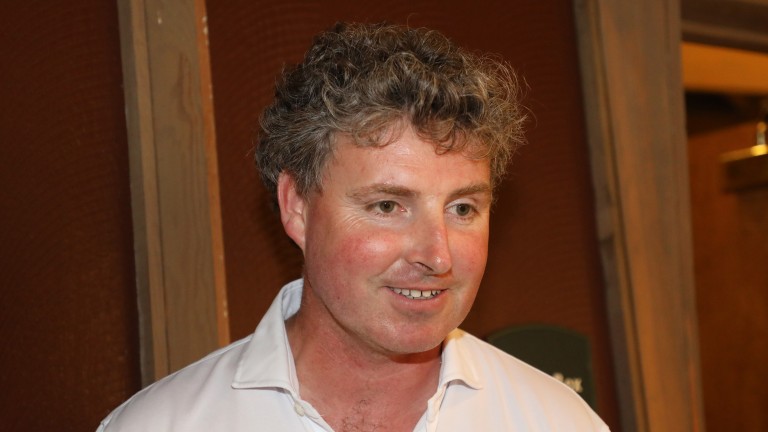 Peter O'Callaghan: "He has continued to be nice all year and finished out a beautiful horse."
Keeneland photo/photosbyZ

The colt was purchased initially by Peter O'Callaghan at the 2022 Fasig-Tipton Kentucky February Mixed Sale as a share with his farm staff.

"When I got this guy in February, I put a bundle of my main staff in for half, so it was a great result for them," O'Callaghan said. "They did a great job looking after him all year. When we bought him, he was a lovely colt, and he didn't require a lot of imagination; he was a big, strapping colt in February. He was correct, had a great walk, vetted, and I was a little surprised I got him for $20,000 on the day."

He added: "He has continued to be nice all year and finished out a beautiful horse. He was vetted nearly 18 times here, and I knew he would sell very well. We put him in at $99,000, and he did his thing from there. It's a great result and a great end to the sale, really. We only have a couple on Friday, but that's the end of the major drafts."

David McKathan of Grassroots Training & Sales finished Wednesday with ten horses purchased for gross receipts of $375,000 to be the day's leading buyer.

"It's been another great day for Woods Edge Farm, a few little holes along the way, but overall what an amazing trade there was today," O'Callaghan said.

"The appetite in the back ring all day today, for nice horses that vetted clean, you didn't see many go through at six or seven grand all day, which is a great sign for the game that so many horses are breaking into reasonable money and paying their way for their breeders. At the bottom end, there aren't too many single-digit number sales, which really hurt the breeders and everybody."

Gainesway sold 23 horses during the opening session of Book 5 for gross receipts of $1,166,000 and a median price of $50,696 to be session nine's leading consignor.

329 yearlings were sold today at #KeeSept, a Keeneland record for number of horses sold through the ring during a single session. Today’s clearance rate was 90%.

Thank you and good night to our buyers and sellers! pic.twitter.com/JKC1WmfRUZ

"Prize-money at the moment is driving the market; there is no doubt about it. The tax breaks are certainly driving it as well. Maybe the reduced crops on the yearly basis we are seeing are also driving it," Hunter Valley Farm managing partner Fergus Galvin said.

"However, I don't think it needs to be lost on the job that the lads at Keeneland are doing great. The amount of international buyers here is phenomenal. I remember coming here two years ago and when you went to the back ring, there was no one there.

He continued: "There has been a buzz in the place from day one to today; I know they are being helped by the prize money and spoken about, but I think the guys here at Keeneland have really done a great job. Bringing people in, recruiting, and doing what they promised they would do…getting good physicals in front of people."

Selling from Book 5 continues on Thursday, with hips 3184-3587, beginning at 10am. As of Wednesday evening, 46 horses had been withdrawn from session ten.