James Thomas reports from the penultimate session of the October Sale 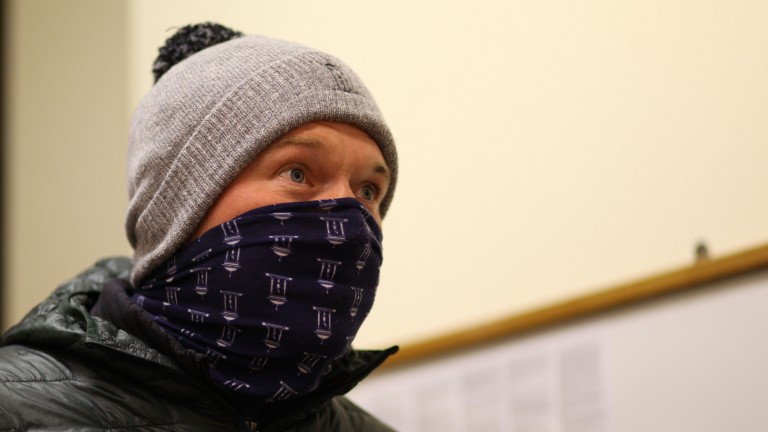 After a six-figure frenzy on day one, prices cooled a little at the concluding session of Book 3 of the Tattersalls October Yearling Sale on Friday, although trade again proved strong for the level.

The strength of trade witnessed at Book 2 was again in evidence during the two-day Book 3, which concluded with a five per cent year-on-year increase in turnover at 7,367,200gns. The average was down marginally at 16,050gns while the median was up by ten per cent at 11,000gns, having been 10,000gns 12 months ago.

Underpinning those positive results was a rock-solid clearance rate of 85 per cent, up from 80 per cent in 2019, as 459 of 538 offered lots found a buyer.

Heading the market was a son of Authorized who went the way of agent Alex Elliott at 90,000gns after a sustained tussle with Jedd O'Keeffe and Mark Johnston late in the session. The French-bred foal, a half-brother to dual Listed winner Scentasia, was bred by Rabbah Bloodstock and offered through The Castlebridge Consignment.

"He's off to Ireland and there's a lot of options for him," said Elliott, whose purchase was made on behalf of an undisclosed client. "He's by a sire we love and they're not really making them any more, except in Turkey! He could run on the Flat next year or we can go down the National Hunt route.

"He's a beautiful horse and a brother to a 107-rated runner in Scentasia. He had a great outlook and vetted well, and he's qualified for French premiums so options are endless. He was worth waiting for. Even if he works out on the Flat he'll end up jumping in time; it'll be Cheltenham rather than Melbourne!" 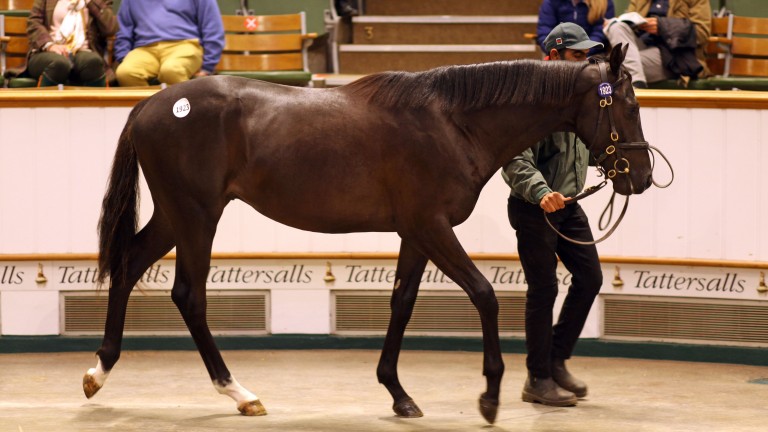 Lot 1,923: the Authorized colt sells to Alex Elliott for 90,000gns
Laura Green
Derby hero Authorized spent 12 years on the Darley stallion roster, the last six of which came at Haras du Logis, but was purchased by the Turkish Jockey Club ahead of the 2020 breeding season.

Elliott, who signed for ten lots at a spend of 870,000gns in Book 2 and four more in Book 3 for 242,000gns, reflected on a busy five days of selling in Newmarket. He said: "Book 2 was hard just because the market was so strong, which I don't think anyone expected, but I bought some good staying horses for some good clients.

"Book 3 is my favourite sale though; I bought the Listed winner Dave Dexter here and it's just a fun sale as it gives you the chance to buy a few sleepers."

Having bred the session-topping Authorized colt, Rabbah Bloodstock also figured prominently as the buyer of two of the day's more notable lots, including the Night Of Thunder colt knocked down to James Tate at 46,000gns.

"Obviously Night Of Thunder has done incredibly well so we were looking for his stock," said the Newmarket trainer. "We thought he was a really lovely example of the stallion's progeny and really liked the way he walked around the ring. Fingers crossed he'll turn out to be a good horse."

The April-born colt is the first foal out of Moonstone Rock, a winning daughter of Rock Of Gibraltar. The dam's half-brother, the Norfolk Stakes runner-up Reignier, brought the only piece of black type to a catalogue page so light that even the consignor quipped there was plenty of space for making notes. 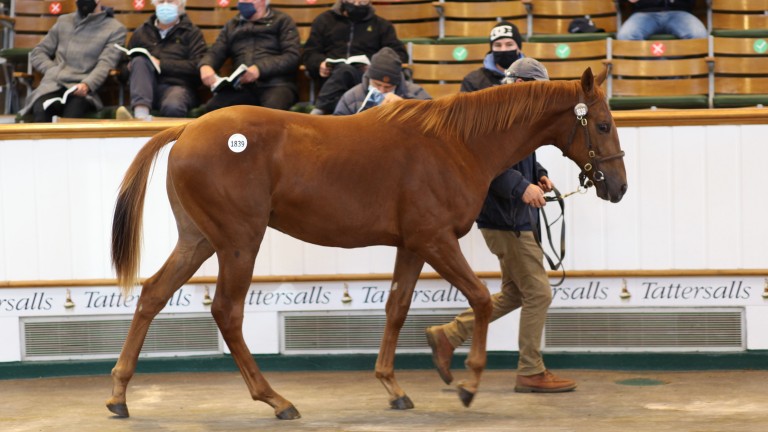 Lot 1,839: the Night of Thunder colt out of Moonstone Rock brings 46,000gns from Rabbah Bloodstock
Laura Green
"The stallion is doing very well, sire power is everything, but that price surprised us a little bit," said Eric Cantillon of Plumton Hall Stud. "We thought he was a nice horse though and perhaps it's better to be a big fish in a small pond. He was bred by Sean Gollogly, we're not actually so heavily involved in the sales business but Sean is a good friend and I know he's very happy sitting watching at home. It's a lovely result."

Rabbah also signed for another of the day's more noteworthy lots in the New Bay filly out of Bellwether from The National Stud. Jono Mills signed the docket at 42,000gns. The filly boasted one of the session's stronger pages as she is out of a daughter of Three Valleys and the dual Grade 1 winner Heat Haze, who in turn is out of Juddmonte's blue hen Hasili.

"She's a nice filly and by a very exciting young stallion by Dubawi, who looks like he's turning into a fabulous sire of sires," said Mills. "We're delighted to get her." 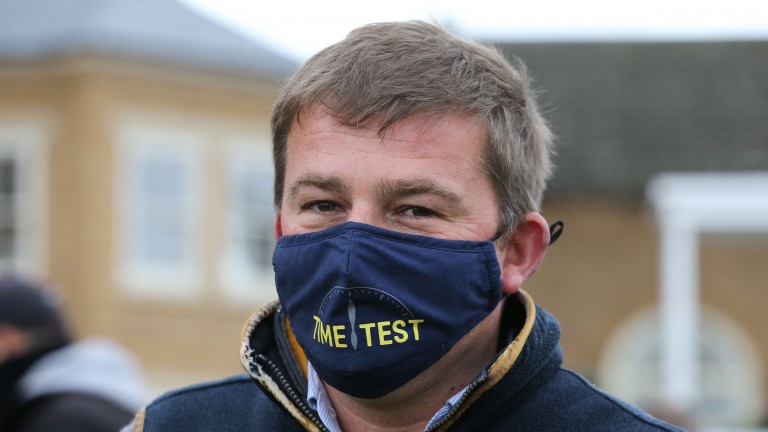 Tim Lane: The National Stud director sports his Time Test mask
Laura Green
The filly was offered by The National Stud on behalf of Australian outfit Rosemont Stud, who purchased the dam for 50,000gns from Juddmonte at the 2018 December Sale.

"She was a lovely filly, New Bay is flying and she's got a great Juddmonte page too," said the National Stud's director Tim Lane. "We've been very lucky this week and trade has been amazing. I don't think anyone saw it coming but long may it last."

Leading syndicator Nick Bradley also struck one of the day's bigger final bids when going to 45,000gns for a filly from the debut crop of Time Test who traces her pedigree back to Coronation Stakes heroine Maids Causeway. The April foal was offered by The Castlebridge Consignment.

"She didn't belong in this catalogue," said Bradley, who was plainly delighted to secure the filly but couldn't mask his frustration at being pushed so far. "She was a Book 1 physical in my opinion. I didn't want to pay 45,000gns but Federico Barberini was the underbidder and he's a fair judge so he made me pay that. On another day she might have only cost five grand."

He continued: "She'll join Richard Fahey, who said I could spend away with some of his money and some of mine. The first-season sires I really like are Time Test and Churchill. I actually spoke to Joe Callan from The National Stud earlier on asking if I can buy into Time Test." 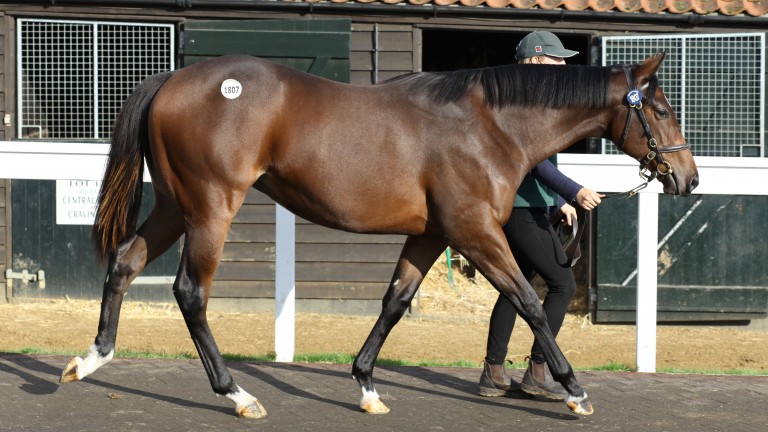 Lot 1,807: the Time Test filly out of Leap Of Joy bought by Nick Bradley Racing and Richard Fahey for 45,000gns
Laura Green
Bradley has enjoyed a fruitful 2020 campaign with his distinctive white and black silks having been carried to success by the likes of Dandalla, winner of the Albany Stakes and the Duchess of Cambridge Stakes, and the Group 2 Prix du Calvados scorer Fev Rover.

In light of those headline-grabbing victories, Bradley had a positive update on the sale of shares for his 2021 team of two-year-olds. He said: "I've bought 20-something yearlings this year and have sold all the shares in most of them already. I must've done 12 deals yesterday and 12 deals the day before so everything I've bought in Book 2 has sold out.

"Things are flying and we've had a great year. The problem when you get to the top of the mountain is that sometimes the only way is down!"

Bradley said he had purposefully targeted fillies as he restocks for future seasons. On his sales ring habits, he said: "My theory is, if I win the Dewhurst I'll be trying to sell the winner on [as a stallion prospect] and the owners will be wondering why I'm selling the best horse. If I win the Cheveley Park Stakes I won't be in a rush to sell as the value will always be there so the owners can live out their dreams. The Great British Bonus is a big help too."

FIRST PUBLISHED 11:02AM, OCT 19 2020
Even if he works out on the Flat he'll end up jumping in time; it'll be Cheltenham rather than Melbourne!