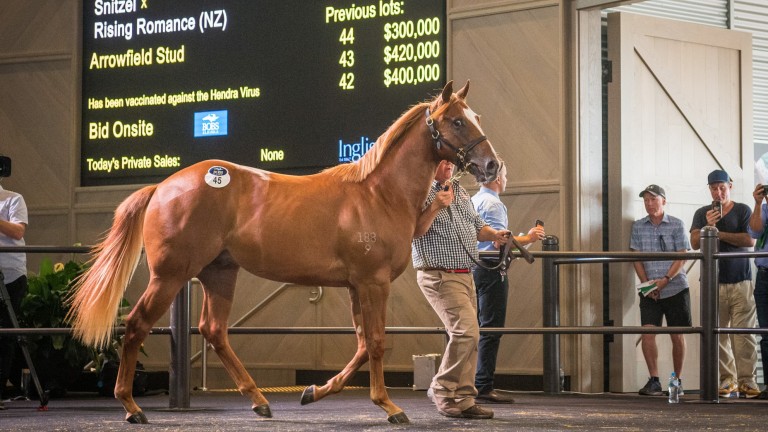 Two colts broke the A$2 million (£1.1m) mark and another nine yearlings made A$1m (£550,000) or more in a stunning opening session of the Inglis Australian Easter Yearling Sale, with Tuesday’s trade the highest on a single day at a southern hemisphere yearling auction.

Setting the tone for a day of remarkable, yet predictable, competition from buyers at Riverside Stables, Vinery Stud sold an Exceed And Excel colt for A$2.1m less than 15 minutes after the sale started.

It was later eclipsed by a well-admired colt by champion stallion Snitzel from Arrowfield Stud who made $2.5m, the most expensive yearling sold Down Under in the past two years.

Trainers Michael, Wayne and John Hawkes, who have been capitalising on their on-track reputation as 'stallion makers' through the likes of Exceedance, Brutal and the recently retired North Pacific, made the strong statement with the purchase of the session-topping yearling.

Ciaron Maher Racing pushed the Hawkes team to the eye-watering figure during a flurry of activity which showed no signs of abating through nearly nine hours of selling.

“He just oozed class. We got here last Tuesday and he was the second horse we saw Tuesday afternoon, and Dad turned to me and Michael, and said ‘we are taking this one home by hook or by crook’,” Wayne Hawkes said.

“He's [John Hawkes] got such a great record of success buying from this sale and hopefully this guy can go on to be the one.

“He's probably more of a Snitzel type. We've had a bit of luck with them here. Just looking up on the wall at Estijaab, who was a top-priced Snitzel filly here, and so this guy will be heading down the similar path. She was an Oaks winner, Rising Romance, and we have got the full sister at home, who is very, very smart.”

On Yearning, the sister to today’s high-priced colt who was runner-up on the Kensington track on March 25, Hawkes said: “She's only had one start and ran second the other day, but I think all the good judges realise that she was in the wrong part of the track and they came down the outside fence, and she was back on the inside.”

Despite the Hawkes’ high opinion of the two-year-old sister Yearning, the family-run stable made sure they weren’t unduly swayed by the fact they train his classy sibling.

“Even though they are brother and sister, you have to like the individual,” he said.

“You don't ever want to get caught up in buying the full-brother or sister for the sake of it, because Michael looks like an athlete and I don’t, it’s as simple as that.

“She looks more like an Oaks filly, and this guy is a dead-set two-year-old, He looks like the real deal and he'll be going to get broken in on Monday and it’s 49 weeks to the Golden Slipper.”

The conviction the trio have about the colt’s credentials led to them running the phone for the past week to ensure they had the clients on board to support the high-priced purchase.

“We thought he'd be around the A$2 million mark, but you never, never quite know. We are just lucky to have a good bunch of owners that have gone and had a crack,” he said.

“When John Hawkes turns to you and tells you this horse has got to go home, he's the bloke that has bought a stack of Group 1 winners out of this sale. You have to make it happen, when he says that.”

The colt comfortably surpassed the reserve placed on him by Arrowfield principal John Messara. “We thought it was a sensible reserve of A$1 million, and that’s a lot of money in itself, but it went straight past that,” he said on the top-priced colt.

“He was an ideal colt to be an early goer. He looks precocious even though he comes from a mare who got up to a mile and a quarter, so he’s going to be a twin-purpose, I’d say,” Messara said.

“His sister, who looks more scopey than him, who John trains, is running in the Percy Sykes.”

Offered as Lot 45, he is the second foal out of Australian Oaks winner Rising Romance, making him a sister to the Arrowfield-raced Yearning. She has a weanling colt by Snitzel and returned to the champion stallion last year.

“Rising Romance was bought by our Japanese partners [privately for about $900,000],” Messara said.

“We bought her for them and then she came to our breeding joint venture. She’s had Snitzel, Snitzel and she’s got a Snitzel again coming for next year, so we won’t be going far off Snitzel given these first two.”

Arrowfield also sold a Snitzel three-quarter sister to Group 3-winning, Group 1-placed sprinter Pariah to New Zealand agent Dean Hawthorne for A$1.05m while a series of strong results helped the Scone operation to be leading vendor on day one, selling 22 yearlings for A$11.725m at an average of A$532,955.

"The expectation coming to Easter for anybody is that it will be a strong sale. It's one of the premier yearling sales in the world, so that is not unreasonable," Inglis general manager of bloodstock sales and marketing Sebastian Hutch said.

"We did a lot of work to prepare for the sale, but we were very confident that it would be a very fair and true market and that's certainly how we felt like it played out.

"I think it is very satisfying to have such a diversity of buyers right the way through. I think it bodes well for tomorrow that there are so many people who seem to be disappointed to the point of frustration by the end of the day.

“People with significant money to buy horses have struggled to buy at the top end. On the flipside, there are people who walked out of her feeling like they have stolen horses. That's the fun of Easter.”

FIRST PUBLISHED 3:18PM, APR 6 2021
We thought it was a sensible reserve of A$1 million, and that’s a lot of money in itself, but it went straight past that