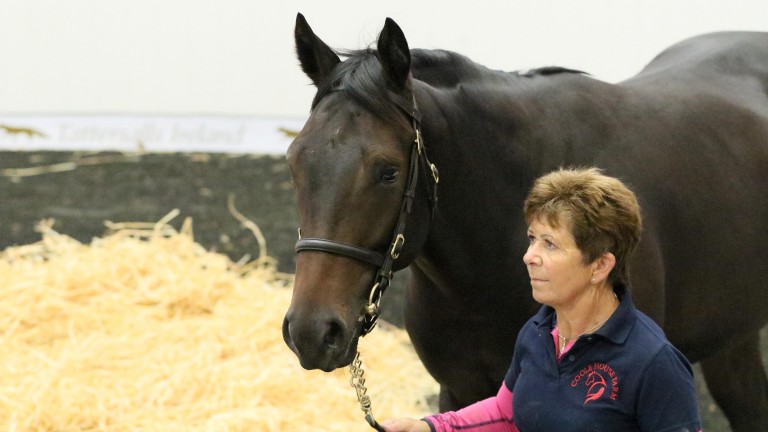 Coole House Farm brought just three yearlings to Part One of the Tattersalls Ireland September Yearling Sale but ended the two-day session as leading consignor by average, coming in at a whopping €71,333.

That was down to a pair of homebred colts who were included in a handful of horses who entered the rarified atmosphere of six-figure sales at Fairyhouse this week - with both selling for an even €100,000.

Wednesday's offering from Barbara Fonzo and Mark Dreeling's Monasterevin farm was a stunning colt by Bated Breath and a half-brother to Western Cape, a Footstepsinthesand colt who made £95,000 to MV Magnier at this sale last year.

Fonzo, who is a full-time veterinary surgeon in addition to her work on the family farm, recounted the epic trek that Caped Lady embarked upon in 2020.

"He is a gorgeous horse, he sold himself, he did not need much help from us. It was a big adventure producing him because we took the mare to England on a 24-hours walk-in to Juddmonte, which we had not done before. Some friends helped us out and travelled the mare because we were busy foaling.

"Everything went like clockwork – she went in-foal straight off, he is correct and he can walk for Ireland. You can't buy those things," she added.

Those priceless attributes do have a value in the ring and in this instance it was €100,000 which Joe Foley, on behalf of Steve Parkin's Clipper Logistics, bid for the striking colt.

He is just the fourth colt by Juddmonte's high-class sprinter that Foley and Parkin have acquired and their track record with the son of Dansili is enviable. 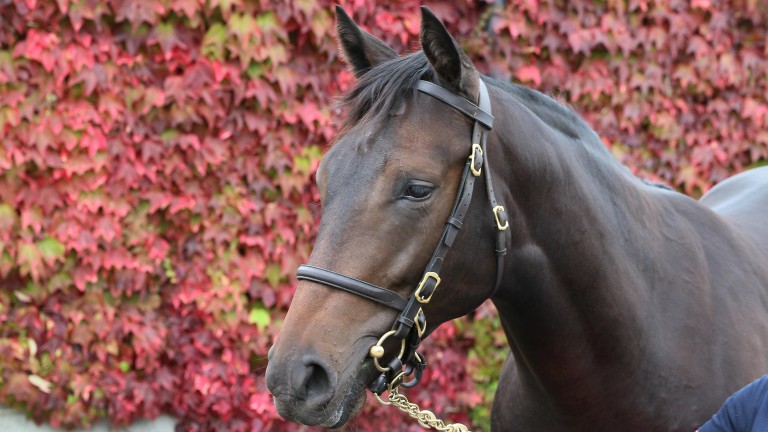 "We have bought three Bated Breath colts before now; the first was Space Traveller who won the Group 2 Clipper Logistics Boomerang Stakes and the Jersey Stakes at Royal Ascot and is now a Grade 1 performer in America where he has been placed three times in Grade 1 races and we have Fresh, who has won three and been placed three times at Ascot so far and we had Victory Day who was sold to Hong Kong."

Group 2 Minstrel Stakes winner Larchmont Lad was produced and sold by Coole House Farm at this sale back in 2015 and Foley was the underbidder on that son of Footstepsinthesand. He was quick to praise the Dreeling-Fonzo family for their outstanding work.

"This colt reminds me of Space Traveller and I was really keen to buy him. He comes from a great farm - Mark and Barbara are great breeders and it is a pleasure to buy from them," he commented.

Fonzo added that they were thrilled to finally sell a yearling to Joe Foley after all this time.

"We try and produce the individual and we thought he was good value for money. We are happy with that price, and we are delighted Joe got him, we have been trying to sell him a horse for a long time!"

Three lots into proceedings, Tradewinds Stud offered a New Bay colt with a lineage that was pure Ballylinch Stud. His dam Tobair An Sheeda is a Bachelor Duke half-sister to Group 1 winner Opinion and the Group 3 winners Fox Hunt and Anam Allta out of Moyglare Stud Stakes winner Priory Belle. 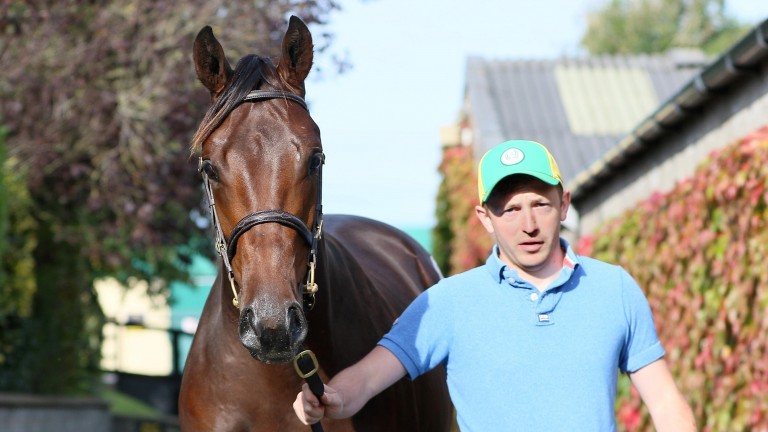 That combination of pedigree and athleticism, with the sire power of New Bay mixed in, resulted in a healthy pinhooking profit for the team at Tradewinds as they turned their €24,000 foal purchased into a sale-topping €115,000 yearling.

Alex Elliott bought the bay colt from the family of Breeders' Cup Juvenile Fillies' Turf and Fillies' Mile winner Chriselliam and revealed that the colt's final destination is Australia and the barn of Spicer Thoroughbreds.

"I have been doing business for Brad Spicer for two years, since Covid hit really. He has had a lot of success with European-bred horses, Camelot, Sea The Moons and, hopefully, now this New Bay. This horse will go to George Peckham to quarantine and then will head down," Elliott explained.

The agent is a strong supporter of New Bay, the Prix du Jockey Club winner who stands at Ballylinch and is from Juddmonte's excellent stallion-producing family of Oasis Dream, Kingman, Beat Hollow and Martaline.

"I think New Bay is a superior sire and I can't get enough of him," he said. "It can be hard to get one by the sire as good looking as this horse, but they all look as though they will run through a brick wall. This is the one I wanted to buy and I think he has a chance of being a good horse."

Highflyer Bloodstock joined forces with Eve Johnson Houghton to buy this year's Tattersalls Ireland Super Auction Stakes winner Streets Of Gold and the organisation's Anthony Bromley was one of the busier agents in action over the two sessions of Part One of the September Yearling Sale.

He struck early on Wednesday morning for a filly from the first crop of Tally-Ho Stud's Inns Of Court, who has been making the right first impressions at yearling sales this summer. 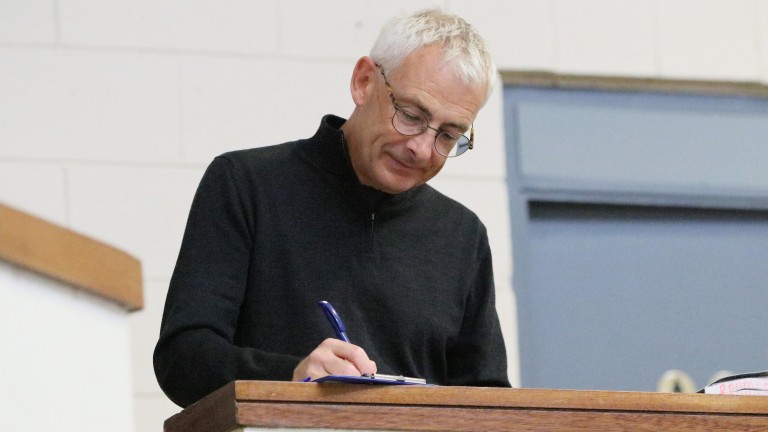 Bromley brought the hammer down at €100,000 for the half-sister to three juvenile winners and she will carry the double green silks of Simon Munir Isaac Souede, which are becoming a more notable presence on the Flat.

She will join their horses in training with Joseph O'Brien who already trains their Listed Churchill Stakes winner and Group 2 Kilboy Estate Stakes second Seisai.

"I have been very taken by the stock by Inns Of Court and she was definitely more than the budget I had proposed, but she was a three-star horse all week and stood out," Bromley remarked.

"We weren't necessarily looking for a filly at the sale but she was my pick. Simon was on the phone and we had to go that little bit more than expected, but hopefully she is a nice filly."

Bred by Robert Norton, she was bought by Tally-Ho Stud for €30,000 at last November's Goffs Foal Sale.

The March-born filly is out of Ziggy's Secret, a winning daughter of Sakhee's Secret who has produced three winners from her first three runners. Ziggy's Secret's dam Ziggy Zaggy is a Diktat half-sister to the Group 1 Premio Roma winner Imperial Dancer from the family of One Voice, placed in the Nassau Stakes and Yorkshire Oaks in 2020 for Jessica Harrington.

Bromley was also the successful bidder for the fourth horse to hit the six-figure mark at Tattersalls Ireland on Wednesday, this time buying a colt from the second crop of Sioux Nation whose first crop contains the Group 3 winners Lakota Sioux and Sydneyarms Chelsea.

The pinhook was the first sold by Tom Burns under his Gibbonstown Stud banner having previously offered his stock through Tally Ho but now has his own farm outside Mullingar.

Bought as a foal by Burns at Goffs last November from Castletown Stud, he returned five times that investment on Wednesday and provided Burns with the perfect start to his new venture.

"I liked this horse last year as a foal – he looked athletic and strong, and I took a chance that Sioux Nation would have a good year," he recalls. "We paid €20,000 for him and I am delighted with this result." 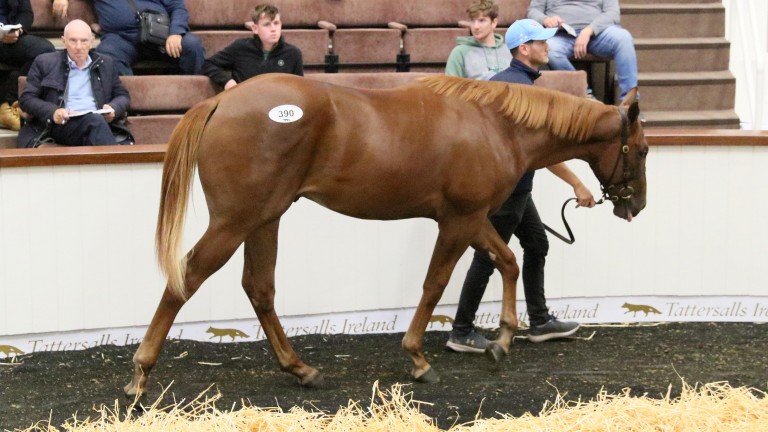 As well as being by one of the sizzling hot young sires, the half-brother to five winners has quite the back pedigree as his Danehill Dancer dam is a three-parts sister to Attire, who is the dam of Irish Champion Stakes winner and leading Prix de l'Arc de Triomphe contender Luxembourg.

One of his half-brothers is the Grade 2 Swinton Handicap Hurdle second Severance and he will join his six-year-old Nathaniel half-brother in the yard of Ben Pauling having been bought by Bromley on behalf of Andrew and Jane Megson.

"He is a big scopey horse, and is by a red hot stallion in Sioux Nation," said Bromley. "The Megsons own Severance, who is one of the five winners out of the mare. This colt will be given lots of time and will be joining trainer Ben Pauling."

John and Jess Dance's Manor House Farm ended the sale as the biggest purchasers by average with five yearlings bought at an average price of €78,000 including the Inns Of Court colt who topped the opening session at €115,000, one of three yearlings bought by Ed Sackville for them on Tuesday.

They added two more to their string on Wednesday, the first of which was an Acclamation filly out of Caribbean Ace who is a Red Clubs half-sister to the dam of Swingalong, winner of the Group 2 Lowther Stakes last month and one of ten fillies left in the field for Saturday's Group 1 Cheveley Park Stakes at Newmarket. The April-born filly was sold by Rathbarry Stud.

Late in the day, they struck for a colt by Starspangledbanner making the decisive bid at £95,000. Offered by Killourney Mor Farm, he is a half-brother to Silken Ladder, a winning three-year-old daughter of No Nay Never who holds an entry at the Curragh on Saturday and in the Group 3 Concorde Stakes at Tipperay the following weekend.

Their dam High Regards is a ten-year-old High Chaparral half-sister to Group 1 The Metropolitan winner Magic Hurricane out of Close Regards, a Danehill half-sister to La Lyra, the granddam of Group 1 Deutsches Derby winner Lucky Speed, who stands at Sunnyhill Stud.

Part One of the Tattersalls Ireland September Yearling Sale posted a record median figure of €26,000 which represented a jump of 11 per cent on the 2021 median of €23,497 - the previous high point for the marker. That growth indicated just how strong traded was at Fairyhouse over the past two days with demand across the board.

The 2022 average price of €30,075, although a decline of five percentage points on last year's record average, was still the second-best recorded.

The sale achieved a clearance rate of 90 per cent which was on a par with last year.

Part Two of the September Yearling Sale begins at the slightly later time of 10.30am on Thursday.

'He was a fantastic individual and looked the part' - $725,000 colt tops session

FIRST PUBLISHED 8:29PM, SEP 21 2022
Everything went like clockwork – she went in-foal straight off, he is correct and he can walk for Ireland. You can't buy those things