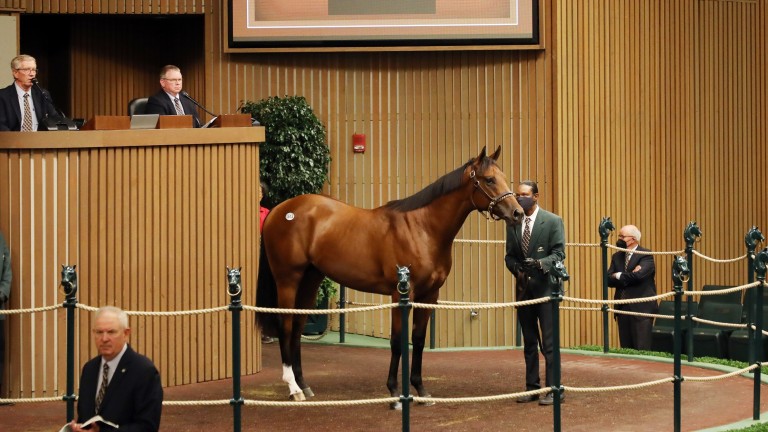 Partnering with Woodford Racing and others, West Point Thoroughbreds acquired a $1 million Tapit colt in 2019 that was eventually named Flightline.

Two years later, the partners are revelling in the excitement of that now three-year-old, who has whipped the opposition in two starts for trainer John Sadler.

West Point and Woodford hope to repeat the formula with Talla Racing, and joined forces to purchase the current sale topper of the Keeneland September Yearling Sale when they acquired a City Of Light colt consigned as hip 612 for $1.7 million during the Book 2 opener on Wednesday.

The buys left Terry Finley, president and CEO of West Point Thoroughbreds, excited to participate in a thriving marketplace.

"It feels great," he said. "There's nothing like a good horse sale that you have the ability to be active at."

He wasn't alone in feeling good. The colt's breeder, Rosilyn Polan of Sunday Morning Farm, sold him as her property and received the congratulations of many. 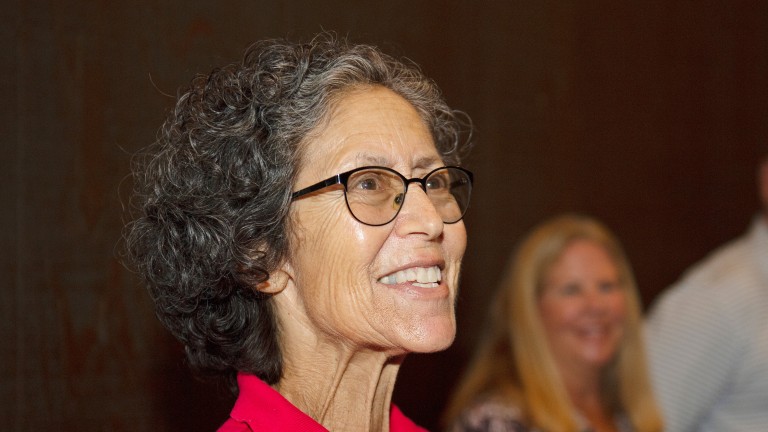 Rosilyn Polan: "He's such a special colt, but you always know that people like them for a price"
Keeneland photo

"He's such a special colt, but you always know that people like them for a price, and there are very few buyers that say I have to have him no matter what," she said. "He was the first foal born on my farm last year. And from that minute I knew he was special."

The colt is out of the stakes-placed Tapit mare Anchorage, the dam of nine foals, with five to win from seven starters, topped by Chip Leader, who placed in the 2018 Ben Ali Stakes at Keeneland and notched eight victories and earnings of $266,751. Another filly out of the mare, Tijori, won two of her ten starts and earned $87,091. Anchorage foaled an Omaha Beach filly this year.

It was City Of Light that was the difference on Wednesday. The first-crop yearling stallion who entered stud in 2019 at Lane's End in Versailles, Kentucky, has been a popular choice for breeders, as have his yearlings at auction. After the first two days of the sale he was the second-leading first-crop sire behind Justify, but on Wednesday it was City Of Light's moment in the spotlight.

"I like the sire a lot," said Farish. "[Hip 612] is a stunning individual, very strong, good-boned colt. A rare-type individual."

Finley, meanwhile, said that he anticipated paying a rich price.

"Obviously, they're all a lot of good judges of horseflesh," he said. "The best in the world - not probably - the best evaluators are here, and you can kind of get a vibe when people are just, 'Man, what about that City Of Light?'

"There aren't that many horses that give you that really, really good feel - that you're looking at an extremely good prospect. That colt - we bought a couple today, and each of them really gave us that sense.

"It's just great to have partners and to be in a position to take some swings with some really good prospects."

Those partners include Michael Talla of Talla Racing, who owns Santa Anita Derby winner Rock Your World with Hronis Racing. Hronis Racing is another owner in the John Sadler-trained Flightline, along with Summer Wind Equine and Siena Farm.

Flightline was acquired at the Saratoga Sale, Fasig-Tipton's selected sale of yearlings in Saratoga Springs, in 2019 from the Lane's End consignment.

The partners said that Sadler will train hip 612 and other prospects acquired by the group, including the Justify colt.

Earlier on Wednesday, Talla said they were outbid.

"So finally, we had to make a stand somewhere," he said. 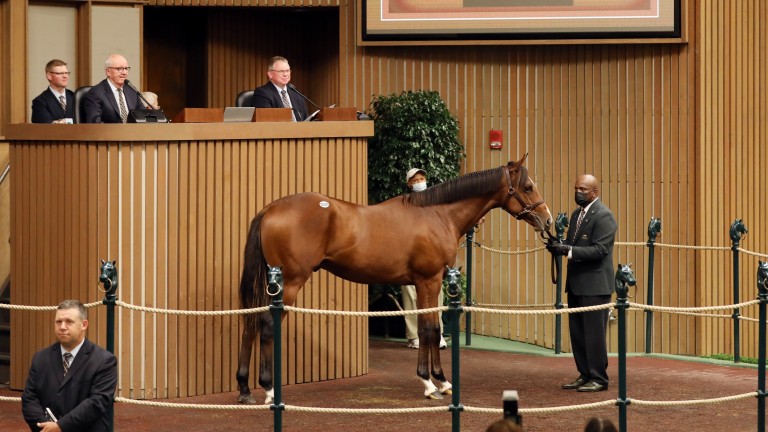 That first stand came with the son of the 2018 Triple Crown winner. Bred in Kentucky and sold by Stonehaven Steadings, hip 580 is out of the winning Latent Heat mare True Feelings, who placed in the 2011 Schuylerville Stakes at Saratoga.

Two of her four foals of racing age have earned black type, led by Feeling Mischief, who captured the 2020 Sandpiper Stakes at Tampa Bay Downs and placed in three other stakes contests. Royal Act is her other black-type performer, a colt who finished second in the Robert B Lewis Stakes at Santa Anita last year.

The mare's other progeny, Forge, is a five-time winner outside of stakes company with earnings of $227,761. True Feelings foaled a Quality Road colt this year.

"We really liked this one, so we went in for him," Talla said of hip 580. "We'll know next year if we made a mistake or not. Let's talk next summer."

Aidan O'Meara, bloodstock director of Stonehaven Steadings, called the sale of 580 and another yearling, hip 590, a $750,000 Mendelssohn filly who went to co-breeder Bart Evans, "probably the most exciting thing I have experienced in this business".

In total, Talla combined with West Point to purchase three horses on Wednesday, with the other being a $500,000 City Of Light filly that sold as hip 451 from Peter O'Callaghan's Woods Edge Farm.

Bred in Kentucky by Woods Edge, the bay filly descends from a family rich in black type and includes Graded winners Voyagers Quest and Golden Mystery.

"She was the all-American filly," said O'Callaghan. "Just a big, fabulous filly with quality and was correct and smooth. She must have been vetted 20 times. It was a great sale. It's hard to breed a filly like that. We were lucky we had a good mare that gave her to us."

Talla also purchased a $340,000 Into Mischief filly [hip 593] with Sweetwater Trading and Rockingham Ranch from the Timber Town consignment. 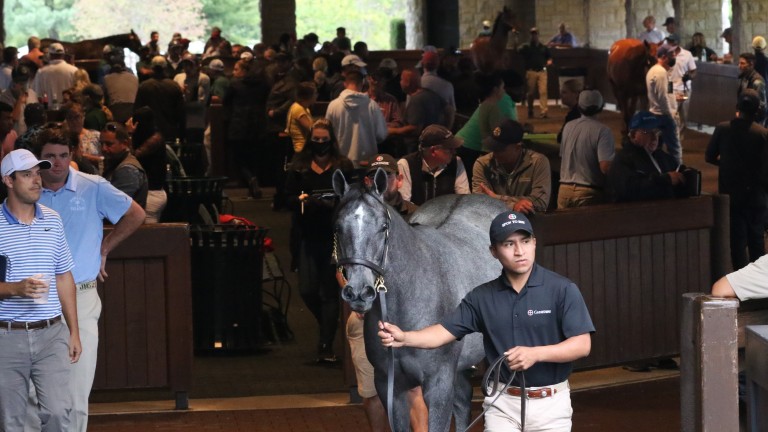 Other purchases by the entities included hip 547, a $430,000 Honor Code colt bought by Woodford Racing and West Point Thoroughbreds who is out of Grade 2 winner Spacy Tracy and a half-brother to Graded winners Benner Island and Victim Of Love; hip 563, a Medaglia D'Oro colt bought solely by Woodford Racing for $300,000 who is out of a full-sister to Grade 1 winner Cupid; and Hip 702, a $675,000 Justify colt for HR Racing, West Point Thoroughbreds and Woodford Racing who is a half-brother to multiple Graded scorer and Classic-placed Commissioner as well as the dam of champion Vino Rosso.

Finley said: "I see people win a race at Saratoga and they have two people in the winner's circle outside of the trainer and their staff, and they just don't seem to have as much fun as the partnerships.

"Certainly the partners have to be compatible, and they have to be in sync because there is nothing worse than a bad partnership. But when it works and you can share the ups and downs, you share the excitement and the anticipation, all of the things we get into the horse ownership business for; it's a magical thing."

Just as happy was Polan, having raised the sale topper at her farm. She said she would celebrate by cleaning stalls, feeding horses, going to bed early, shipping the horses out and continuing the sales process.

"That's the best part of it, it keeps you real," she said.

FIRST PUBLISHED 10:52AM, SEP 16 2021
He was the first foal born on my farm last year. And from that minute I knew he was special