A happy homecoming for the Tattersalls Ireland September Yearling Sale

Fillies all the rage on final day of trading at Fairyhouse 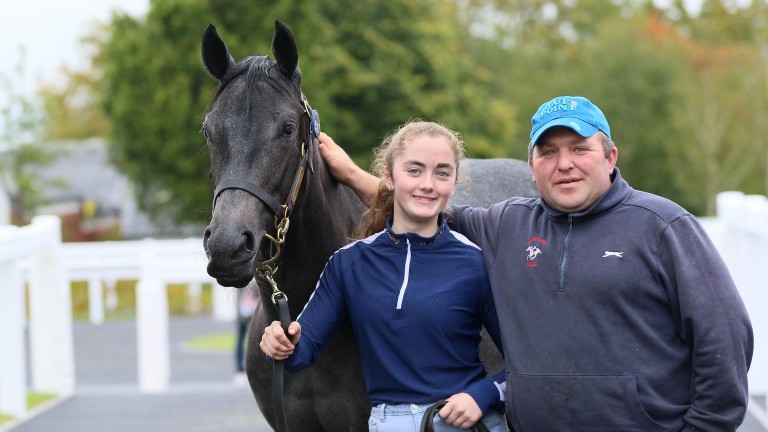 In years gone by, a half-sister to an international Group 1 star by one of Europe's leading sires would not be expected to feature in the pages of the catalogue for Part Two of the Tattersalls Ireland September Yearling Sale but such is the upwardly mobile profile of the event as a whole that the quality of yearlings on offer has improved markedly.

So it came to pass that Ringfort Stud consigned a Dark Angel half-sister to Hunter's Light, whose three top-level victories for Saeed bin Suroor included the 2015 Jebel Hatta at Meydan.

The grey is a half-sister to four further winners including the Listed Prix Dahlia third Linda Radlett by Manduro, who is the dam of Sea The Stars' Group 2 Hardwick Stakes and Group 3 Pride Stakes winner Fanny Logan.

The sunshine of Part One had been replaced by torrential downpours but the crowd sheltering from the rain inside the rings was bolstered by prospective purchasers all hoping to steal away the filly.

Joe Foley brought the hammer down at €52,000 and revealed that the filly had prompted him to change his plans after he inspected her in Barn A on Thursday morning.

"She is a good model of a Dark Angel filly, really lovely and athletic and looks racy. I wasn't expecting to find a filly like her here this morning," Foley remarked.

To borrow a phrase from musical theatre, the filly would be classified as a triple threat as she possesses the triumvirate of pedigree, conformation and sire power that is so sought after and Foley commented on the attractiveness of that magic combination.

"Physically she is very nice but she also has lots of residual value as a half-sister to a treble Group 1 winner and from the deep family of Darshaan. She came well-recommended from the team at Ringfort," he added.

Her dam Portmanteau is a winning Barathea three-parts sister to Listed Braveheart Stakes winner Scriptwriter and a half-sister to the Grand Prix de Deauville and Sandown Classic Trial winner Courteous, by Generous.

The second dam, Dayanata, is a full-sister to the champion three-year-old and brilliant broodmare sire Darshaan and to Darara, the Prix Vermeille-winning dam of Group 1 winners Rewilding and Dar Re Mi, who in turn is the dam of European champion two-year-old Too Darn Hot.

The filly helped Derek Veitch's Ringfort Stud to the top of the consignors' charts for Part Two with their average of €30,000 for three yearlings the best for any vendor with more than one horse sold.

Trade was dominated by fillies with the nine most expensive yearlings on the day female.

Coolmore's Phoenix and Norfolk Stakes winner Sioux Nation is in a close contest with Havana Grey to be crowned champion first-season sire. The son of Scat Daddy has done particularly well with his first crop of fillies and they have provided him with six of his seven black type performers to date including both of his Group 3 winners.

Patricia Doyle of Ashwood Stud consigned a €42,000 Sioux Nation filly from the legendary Ballymacoll Stud family of Hellenic, Islington and Fiorente on behalf of Peter Stone. She was bought online by BBA Ireland’s Michael Donohoe on behalf of a US client. 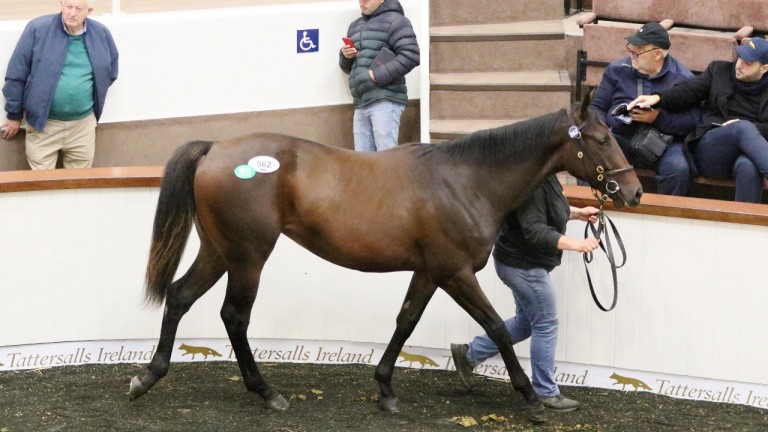 The March-born filly is the second foal out of Art Nouvelle, a winning daughter of Art Conoisseur and Van De Capelle, who is a Pivotal half-sister to Australian Group 3 winner Ruscello and the Listed winner Wild Irish Rose. Van De Capelle was also sourced by Stone from the Ballymacoll Stud dispersal.

"Her 13th foal is by Sioux Nation and he is a cracker, a really strong sort. We retained him and he is in training with Joseph O'Brien – we named him Engines On and he should be running soon," commented Stone, who keeps six broodmares at his farm in Redcross, County Wicklow.

Engines On had a major impact on this filly's conception.

"It is because he is such a stand out that we sent Art Nouvelle back to Sioux Nation – she'd had some smallish foals and we thought he might help put some size into the foal," said Stone.

"She is a lovely filly with a nice page and looks like she could be quick," reported Murphy, who signed for the daughter of Listed Bosra Sham Stakes fourth Valen at €30,000.

Butler reaches for the Moon

Another trainer who had returned to supervising daily activity at his yard in England following his inspections at Fairyhouse was John Butler, who left the bidding on a €27,000 Dandy Man filly to Micheal Orlandi of Compas Equine who stands Kuroshio at his Starfield Stud in County Westmeath.

"John saw her when he was over doing his inspections and he really liked her. She is a fast and powerful looking filly who should be precocious too. Con Marnane was the underbidder and when you see the likes of him bidding on the same horses as you are then it gives you confidence," Orlandi remarked.

Consigned by Hollyhill Farm on behalf of breeder Lady O'Reilly's Skymarc Farms, the filly is another of those from the sale who could have a very productive broodmare career should she prove herself on the track. 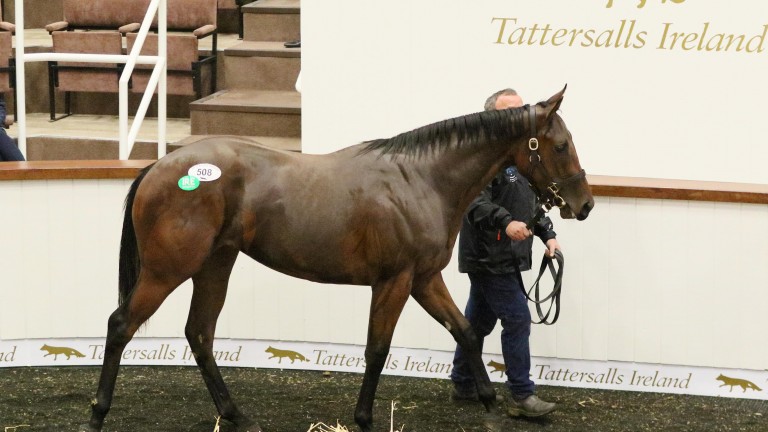 She is the first foal of her dam Moondrop, who was also bred by Lady O'Reilly, and is a Toronado three-parts sister to the Lingfield Derby Trial winner Kilimanjaro.

Second dam Middle Persia is a Dalakhani half-sister to six stakes winners headed by Nayarra, who was successful in the Group 1 Premio Gran Criterium. They are out of the Danehill mare Massara, a Listed-winning full-sister to Kodiac and half-sister to Invincible Spirit and Group 3 winner Acts Of Grace, the grandam of Mishriff.

"She has a lovely back pedigree too and I hope she is successful for John. He's had a good season and is expanding the yard and stocking up on yearlings," Orlandi added.

There was a solitary filly from the first crop of Shadwell's Group 1 Commonwealth Cup winner Eqtidaar catalogued on Thursday and Ladytown Stables's offering brought the bidders scurrying in from the rain early in the action.

Adam Potts, who later professed himself impressed with the stock of the stallion, was the last man standing when the hammer fell at €28,000.

"I have bought her for Danny O'Donovan to probably breeze. She's a really athletic filly and looks racy so hopefully she will make a few quid. I actually looked at her during my Part One inspections and she would have fitted right in there," Potts said.

She too has residual broodmare value as her dam L'Ile Aux Loups is a Rock Of Gibraltar half-sister to Group 2 winner Loup Breton and Group 3 winner Lil'Wing. Second dam Louve won the Group 3 Prix de Flore and is an Irish River three-parts sister to the champion, Prix d'Ispahan winner and sire Loup Sauvage.

"She's the nicest filly here and I like what I have seen of Eqtidaar's stock so far," Potts said. "We bought one by him at the Somerville Sale for 30,000gns and they seem to have quality, strength and precocity."

It was a very happy homecoming for the September Yearling Sale with Part Two following the lead set by Part One in posting impressive increases and a healthy 82 per cent clearance rate.

From a smaller catalogue than in the pre-pandemic years, it equalled or set records for both the median and average price. The former, at €8,000, was 12 per cent higher than in 2021 and matched the previous best which was set in 2017 when 207 yearlings were sold.

The average of €10,495 was the best in the nine year existence of the sale and represented growth of nine per cent on last year's average.

'We all know owners need luck and, fortunately, Shaikh Khalid seems to be lucky' (£)

FIRST PUBLISHED 5:00PM, SEP 22 2022
Physically she is very nice but she also has lots of residual value as a half-sister to a treble Group 1 winner