Sheikh Mohammed's operation was the leading consignor at the third session 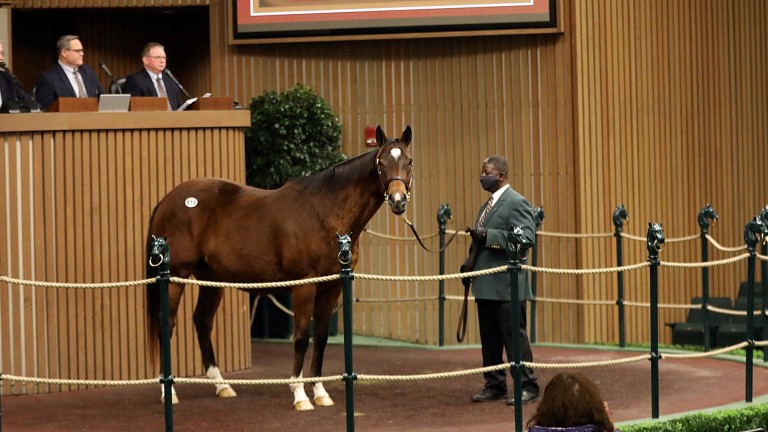 Godolphin's Crowning Jewel, a half-sister to Darley stallion Street Sense and offered in foal to Street Boss, tops Keeneland
Keeneland
1 of 1
By Lauren Gash of Bloodhorse 10:34AM, JAN 14 2022

Godolphin brought a draft of 26 broodmares and broodmare prospects to the Keeneland January Horses of All Ages Sale, and all changed hands to make Sheikh Mohammed's global operation the leading consignor of the sale's third session with gross receipts of $1,434,500.

The top pick from Godolphin's consignment was the $480,000 Into Mischief mare Crowning Jewel (hip 914), a half-sister to Darley stallion Street Sense offered in foal to Street Boss on a March cover.

Dan Hall signed the ticket for the unraced five-year-old, as Adena Springs secured two other purchases on Thursday for total receipts of $535,000 to emerge as the day's leading buyer.

Street Boss, who stands at Darley for an advertised fee of $15,000, ended the day as the session's leading covering sire with eight mares in foal selling for a total of $780,000 at an average price of $97,500. Godolphin consigned all eight of the mares.

"It was a surprise that the mare made as much as she did, being in foal to Street Boss," said Michael Banahan, director of bloodstock for Godolphin USA.

"That is a pretty big number for him. He has been very successful in Australia, and I think we would have seen a different level of value on a mare in foal to him in Australia. He has been successful here; he has a Kentucky Oaks winner [Cathryn Sophia]. He gets you a nice, solid horse."

The action continues as @AdenaSprings goes to $480,000 for Crowning Jewel, marking the highest price for day 3 of #KeeJan since 2005! From @godolphin, she's sold in foal to Street Boss. pic.twitter.com/Ta2ikvQP1r

Consignor Mark Taylor of Taylor Made Sales found Thursday's market to be fair but noted the expected significant drop after horses of a certain quality.

"We have had very few RNAs, but the lower end is a lot trickier," he reported. "If you go in there with a mare that you think is worth less than $15,000, she might end up being less than $5,000. The carrying costs are going up.

"I've said it before: there is a quality line in the market. If you are above that line, you are getting paid a lot more than you expect. And if you are slightly below the line, there is a big drop-off. I think everybody is just trying to get above the line, wherever you are at in the market."

"It's a bit of the same song and dance," added Denali Stud's Conrad Bandoroff. "If they like them, buyers are willing to pay and in a lot of cases willing to stretch. I think the middle and lower end of the market is a bit softer, but you can get horses sold, as long as you set a reasonable expectation. We have sent a lot through today without reserves."

Thesis Break, by Munnings, sold for $210,000 to Hill 'n' Dale/Xalapa to be the day's top-priced racing or broodmare prospect and second-highest price of the session. The lightly raced three-year-old out of Cloudburst, producer of Mystic Eyes  and Tempers Flair, was consigned by ELiTE as hip 1151.

A yearling filly by Munnings consigned by Bill Murphy as hip 1122 sold over the internet to JDT Racing for $105,000 and was the top-priced short yearling of the day. The April foal is out of the winning Perfect Soul mare Soul Of Fashion and comes from the family of Hold To Fashion, the dam of Grade 1 winner Peace Rules and stakes winner Wild Fashion.

"She was very well-received," said Murphy. "She went through the November sale and we couldn't get $70,000 for her; the morning of the sale she had some conjunctivitis, so I took her home, treated her, and brought her back.

"She improved over the last two months. A lot of people were on her, and I think it was great placement putting her in a day late. She stuck out and we are delighted with the result."

This time last week we were covered in snow. Now there’s just one more big session of @keenelandsales #January to go. Thank you to everyone for your support and hard work to get to this point…see you tomorrow! pic.twitter.com/ODH2KvpQdP

Murphy defined the Thursday market as "a bit soft," adding, "we are tickled to death with what we got today, but hearing from other people, it has been difficult."

The session's highest-priced short yearling colt, a $100,000 son of Mitole, went to Rexy Bloodstock, Ted Campion's pinhooking partnership. Taylor Made Sales Agency consigned the Kentucky-bred colt as hip 976. He is out of Holidays Saratoga, a half-sibling to 2014 Inside Information Stakes winner Heart Stealer.

Campion said: "'Rexy' was an old dog of ours; he passed away a few years ago. I use the name, and it's been lucky for us. We usually buy ten to 12 to pinhook every year. It's a little partnership."

This September, the colt will likely make a second appearance in the sales ring.

"I like the stallion, and the individual was a good walker," Campion commented. "He looks like he will be quite nice later on in the year. I was underbidder on his brother last year, the Union Rags."

The Keeneland January Sale concludes on Friday with the second day of selling from Book 2. Hips 1225-1609 will be on offer beginning at 10am eastern time (3pm GMT).

FIRST PUBLISHED 10:34AM, JAN 14 2022
He has been very successful in Australia, and I think we would have seen a different level of value on a mare in foal to him in Australia