Coolmore land a A$1.9 million knockout blow on day one at Magic Millions 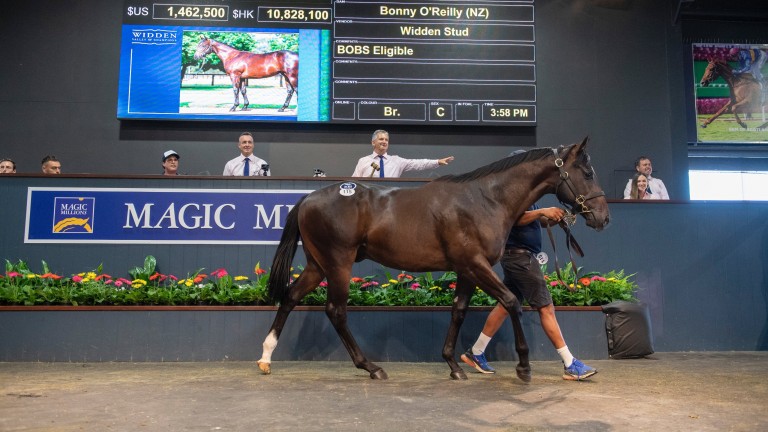 Not for the first time, a stunning appetite to be involved in the Australian racing industry was witnessed on the Gold Coast on Tuesday as buyers defied outside influences to produce results many stakeholders dared not predict in the days preceding the opening session of the 2021 Magic Millions Yearling Sale.

The 180-lot first of seven sessions belied any pre-sale pessimism which was expressed, with not only the top end predictably remaining strong, but the middle to lower-end of the market also remaining robust and the majority of horses finding new owners.

The remarkable figures were spurred by a stunning ten-minute burst in which Widden Stud sold an I Am Invincible filly for $975,000, only for her to lose the highest-priced horse honour two lots later as their Snitzel colt realised $1.9 million (£1,077,661).

Magic Millions managing director Barry Bowditch warned pre-sale that it may not be possible to match previous years’ figures given the Covid-19 pandemic and the fact some key buyers were unable to attend the auction, but he believes there were a number of drivers behind yesterday’s strong demand for new stock.

“I think the confidence we have here in our industry is something that you can’t underestimate. There’s outstanding prize-money to be won in Australia and this sale, in particular, gives you the best chance to race in the best race series in the world and buyers have got confidence in that,” Bowditch said.

“They are getting in behind these horses; they are setting a benchmark that is pretty significant in my mind. We have confidence in our catalogue but it is a relief that the market is seeing it the same way.”

The highlight of the day was witnessing a global thoroughbred heavyweight and the combined clout of two Australian-based stallion syndicates going toe-to-toe in an auction ring duel worthy of a marquee title fight.

At one side, believed to be the James Harron Bloodstock partnership and the newly formed Victorian Alliance syndicate led by Rosemont Stud, bids were fired in without a shadow of trepidation before their rivals Coolmore, somewhat theatrically, left onlookers hanging before each signal to go again.

Flanked by brother MV, Mick Flanagan and other trusted Coolmore figures, Tom Magnier’s A$1.9 million bid was enough to secure the colt, the latest acquisition in a considered long-term plan to add high-class bloodstock to the outfit’s massive portfolio.

“All the top people seemed to be on him. You saw what we had to pay for him, but he was a nice colt and we’ve a great group of people to race the horse with,” Tom Magnier said.

“We are going to need some luck, but we are in a great country to do that. It’s just great to be able to go to the Gold Coast and fair play to the Magic Millions, they've got all the people here and there are a great bunch of horses.”

Chris Waller will train the Snitzel colt, who is the first foal out of Listed winner Bonny O’Reilly.

“There were lots of people who admired the colt and wanted to buy him, but it came down to two big teams with a fair bit of conviction,” Widden Stud’s Antony Thompson said.

“Coolmore obviously is the biggest stallion player in the world and their support of Australia is well-known, so for MV Magnier to quarantine with Mick Flanagan to be down here with his brother Tom to support the Australian industry the way they have, I think the whole Australian industry owes them a huge debt of gratitude for taking that time out over the Christmas period to isolate in a hotel to be part of this sale.

“It says a lot about their commitment to the industry.”

Thompson, in conjunction with David Redvers, paid A$1.2 million for Bonny O’Reilly carrying the session-topping colt at the 2019 Magic Millions National Broodmare Sale, a year after being underbidder on the former Bjorn Baker-trained mare at the same Gold Coast auction, where she realised A$800,000 in 2018.

“The first time she went through the Magic Millions off the track, I was underbidder at A$800,000 and she made A$825,000, and I regretted the fact that I didn’t keep going,” Thompson revealed.

“I thought about it for a while and, luckily for me, we got a second opportunity when she came back through the sale 12 months later in foal to Snitzel and we had to go a bit further.

“We paid A$1.2 million for her then but I didn’t want to miss her the second time. At the time it was a lot of money for her, but she was just a stunning mare. It’s such a greafamily and those blue hens are hard to come by and so I was delighted when I was able to buy her.”