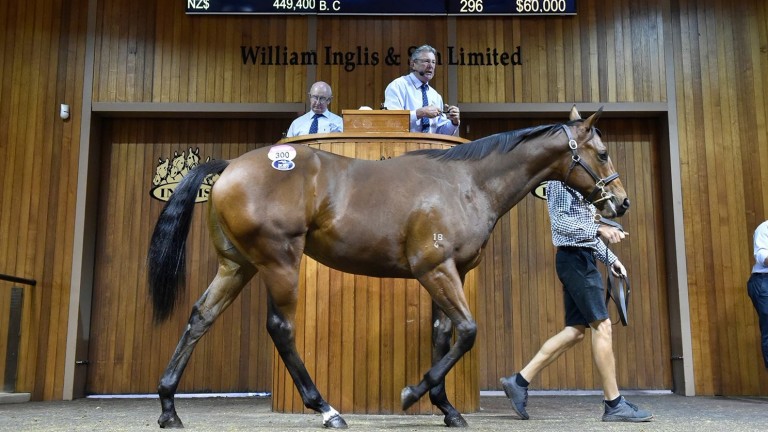 The session-topping Rubick colt in the Melbourne sales ring before fetching A$420,000
Liz Vagg/Inglis
1 of 1
By Tim Rowe of ANZ Bloodstock News UPDATED 2:20PM, MAR 5 2018

The six-figure yearling was offered by Supreme Thoroughbreds on behalf of Dorrington Farm, and is a half-brother to last month's Group 2 winner Enbihaar, who provided a significant update when finishing runner-up to Written By in the Blue Diamond Stakes late last month.

Ryan bought the horse for Teeley Assets' Muzaffar Yaseen after an order to buy a yearling by the sire.

"He was the spitting image of his old man, albeit maybe a little taller than his father at the same age," said Ryan. "Teeley's Mr Yaseen told me at the start of the year to buy the best-looking Rubick I could find, and this horse was it hands down.

"He's a great mover with great strength and has a nice page. His half-sister running second in the Blue Diamond certainly didn't hurt either. I'm tipping the family is all going to be able to run. We've had a bit to do with the family obviously over the years and Mr Yaseen has raced some of the best horses we have seen, so with a bit of luck this is his next one."

Breeder Robert Crabtree said he was a big believer in the Coolmore Stud-based Rubick.

"I was delighted with the result. The mare has done a fantastic job and for all the world when you look at that yearling you saw Rubick to a tee," Crabtree told ANZ Bloodstock News.

"We really like Rubick and we thought he was a very well priced stallion and I guess [Coolmore Stud] are trying to do what Yarraman Park Stud did with I Am Invincible by starting him at a low fee and building him quickly with some value. Hopefully this horse can start that.”

Crabtree said the sale had been patchy in parts, particularly on Sunday, but had managed to sell all his Dorrington Farm-bred yearlings.

"We've sold everything and I guess that's all you can do. We have taken some unders and got some overs. But it has been a tougher sale than normal, there is no doubt about that,” he said.

"It might be because of the proximity to the Classic sale being the inaugural one at Riverside with a bigger catalogue and a bit closer in the calendar, it could have been that."

Earlier in the session John Muir of Milburn Creek added a daughter of Sepoy to his thoroughbred portfolio having earmarked her for his broodmare band. Bloodstock agent Damon Gabbedy went to $400,000 to secure the filly.

The Blue Gum Farm-consigned filly is the ninth foal out of the remarkable mare Beauty World, whose eight foals to race are all winners, including four stakes scorers and two stakes-placed horses.

They include Group 3 winners Lite'n In My Veins, Hi World, Listed winners Loveyamadly and Ducimus.

"John always likes to buy a filly each year with an eye to a future broodmare and this filly is a perfect example of that," said Gabbedy.

"We didn't think she'd make that much but she is the best-bred filly in the sale," added Muir. "It's an outstanding mating and she sailed through the vet's examination. You have to pay a premium to buy fillies like this out of superior mares so that's what we did."

A trainer for the filly had not been decided, but Muir hinted that anyone who buys any of his 22 Milburn Creek-offered lots at next month’s Inglis Australian Easter Yearling Sale would be in the mix.

"Whoever buys nice yearlings from me at the Easter Sale will be on the shortlist for me to return the favour!" said Muir.

Blue Gum Farm's Philip Campbell said the Sepoy filly had been a standout all week and that he was far from surprised by the price tag.

"I'm not shocked at all because the filly is cracking and the mare has been to a number of different stallions and it hasn't mattered who she's gone to, she's produced superior runners," Campbell told ANZ Bloodstock News.

"That filly is worth that sort of money as a broodmare, but to look at her as a product to go to the racetrack you are going to have so much fun and she is going to improve her value."

Bred by Neville and Susie Duncan of Oakland Park Stud, the filly represented another strong sales result for the Western Australian farm.

"They bred [Cox Plate winner] Northerly, they bred Marasco, they are absolutely A1 breeders and we have been selling yearlings for them now for four years and we have never passed a horse in," said Campbell. "They are legitimate sellers and we have sold Ducimus and Jukebox for them. They are breeders of quality horses and this is another one."

Darren Weir will train a colt by Zoustar who was sold for A$360,000 to syndicator Spicer Thoroughbreds in partnership with Noorilim Park. The Bowness Stud-consigned colt, who was offered on behalf of breeder Vieira Group, is the second foal out of the winning Exceed And Excel mare Bionic Girl, whose first foal is the Listed-placed juvenile filly Bionics.

"We've bought two Zoustars at the Coast [Magic Millions] and he's the third one,” Brad Spicer told ANZ Bloodstock News. "I love Zoustar as he's just a really good up and coming sire. Every trainer has a good one and it's great to team up with Peter Carrick and Noorilim Park to buy the colt.

"He looks like that early type of horse who will be up and running for a Diamond or a Slipper and hopefully even some of the Super Vobis Gold money here in Victoria."

Spicer noted that the competition was strong on the quality colts in the sale.

"He's a lovely mover and he was the colt of the sale for me, so it was great to be able to pick him up just under budget,” he said. "It's very hard to come and buy those colts because China Horse Club and all the good judges are on them.”

Monday's session saw some flat patches, with a string of passed in lots, but day two still managed to maintain the opening session's clearance rate that closed at 81 per cent.

The Inglis Melbourne Premier Yearling Sale has experienced nine consecutive years of growth, and with the 2018 auction still in with a chance of registering a small increase, the company's managing director Mark Webster declared himself happy with proceedings.

"Last year's result was the culmination of nine continuous years of growth. Holding for a year, which looks like what we are going to do, is not unreasonable," said Webster.

"A sale can't just keep going up by ten to 15 per cent every year and this is the only sale in the world that has gone up nine years straight. I'm satisfied the results reflect what we have here."

Day three of Book One starts at 11am local time on Tuesday (10pm Monday, GMT).

FIRST PUBLISHED 1:20PM, MAR 5 2018
You have to pay a premium to buy fillies like this out of superior mares so that's what we did