Zoe Vicarage assesses the pedigrees of the leading chances 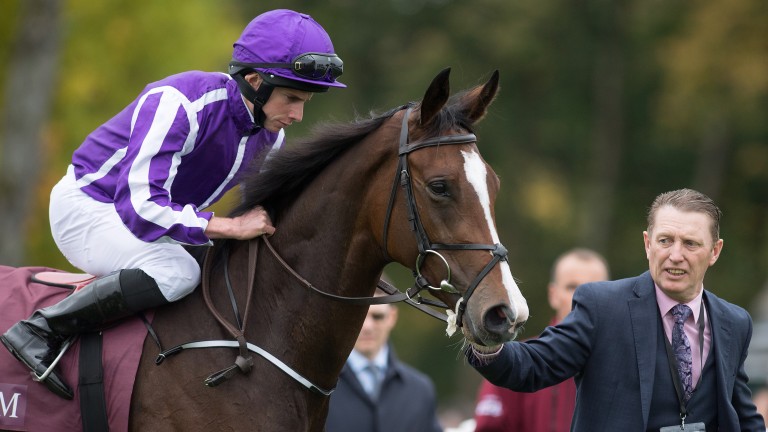 Happily: one of two representatives for Galileo in the Coral-Eclipse
Edward Whitaker
1 of 1
UPDATED 4:01PM, JUL 7 2018

The only son of Galileo in the field for this year's Coral-Eclipse, Cliffs Of Moher descends from the family of multiple Group 1 winner Henrythenavigator.

He is the best performer to have been produced by the winning Dansili mare Wave and has won twice over the 1m2f trip - most recently when landing the Group 2 Mooresbridge Stakes in May.

The cross of Galileo over Dansili has produced seven winners to date, including this year's Ribblesdale Stakes heroine Magic Wand.

The winner of the 2018 Huxley Stakes, run over 1m2f, Forest Ranger has made rapid progress through the ranks this season and will look to continue his rise on Saturday.

Out of the Listed-winning Anabaa mare Alava, Forest Ranger is a half-brother to the Listed-placed Home Cummins, while this is the family of Grade 1 winner Passing Shot.

He is by Lawman, winner of the Prix du Jockey Club, Prix Jean Prat and Prix Jacques le Marois, who has supplied five top-level performers headed by Just The Judge and Harbour Law.

One of two sons of Kitten's Joy in the race, Hawkbill will be looking to add a second Coral-Eclipse to go alongside his victory in the contest back in 2016.

The oldest horse in the field at the age of five, Hawkbill will be back in the thick of things if he recaptures his best form over 1m2f and his third-placed effort behind Poet's Word in the Prince of Wales's Stakes will have him primed for a big race.

Raymond Tusk may have only had two runs in his career but connections clearly think enough of him to pitch him at the deep end on his third start.

Winner over a mile on his debut, the son of High Chaparral was last seen finishing second over Saturday's trip behind Loxley at Newmarket last month.

Bred by Lynch-Bages and Rhinestone Bloodstock, Raymond Tusk is out of the Danehill mare Dancing Shoes and is a half-brother to the Grade 2 scorer Striking Dancer. There's plenty of speed in his pedigree too - Prix de l'Abbaye winner Tangerine Trees and Beverley Bullet scorer Alpha Delphini can be found further back.

An €85,000 purchase at the Arqana August Yearling Sale, victory for Raymond Tusk would give his connections a massive return on their investment. 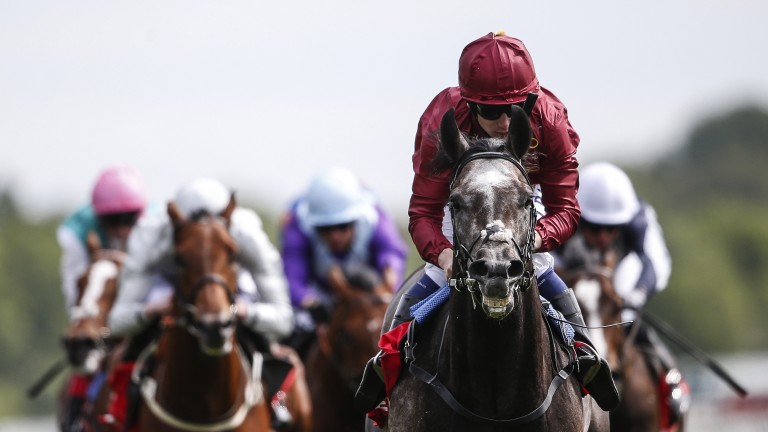 Completing the pair of Kitten's Joy's in this race is last-start Derby third Roaring Lion. The three-year-old was staying on at the finish and is dropping back in trip to a distance he can excel at.

Runaway winner of the Dante Stakes over an extended 1m2f, he was snapped up for $160,000 as yearling by David Redvers at the Keeneland September Sale in 2016.

He is out of Vionnet, a daughter of Street Sense who is one of five black-type performers out of the dual Grade 3-winning sprinter Cambiocorsa. Expect Roaring Lion to give another bold showing of his abilities.

Despite announcing his talents with a facile success in the 2,000 Guineas in May, Saxon Warrior finished fourth in last month's Epsom Derby behind Masar.

The son of Japanese super sire Deep Impact, bred by Orpendale, Chelston and Wyatt out of Moyglare Stud Stakes heroine Maybe, will be looking to bounce back to his best on Saturday.

Third in the Irish Derby last weekend, it will be interesting to see how Saxon Warrior fares in his quest to add another elite level success in the contest. Either way, the race is likely to have a big impact on his future stallion career.

She is one of five winners out of blue hen You'resothrilling which makes her a sister to Marvellous, Gleneagles, Coolmore and Taj Mahal.

Significantly, You'resothrilling is a sister to the late Giant's Causeway who ran out with this race back in 2000, which plays in Happily's favour.

It is hard not to have been taken by Roaring Lion's demolition of the opposition in May's Dante Stakes. The drop in trip will prove to his advantage and looks capable of producing another strong performance.

'When you take a horse to the sales and it goes well, there's nothing better'

FIRST PUBLISHED 4:23PM, JUL 6 2018
Happily is one of five winners out of blue hen You'resothrilling which makes her a sister to Marvellous, Gleneagles, Coolmore and Taj Mahal