Runhappy retired to stand at Claiborne Farm in 2017

Son of Super Save won three times at the highest level 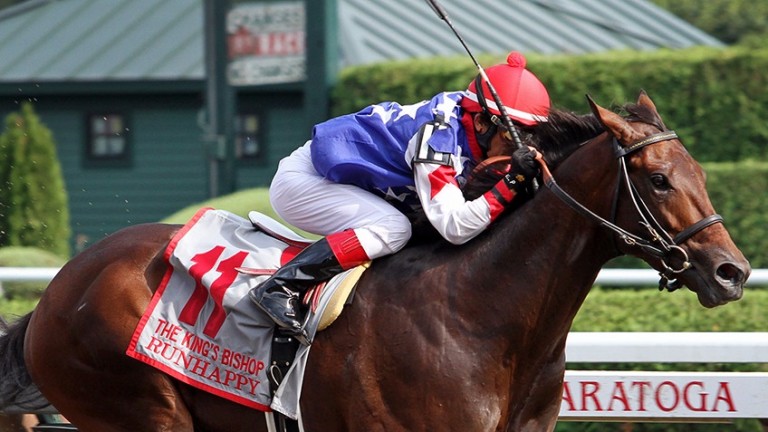 Triple Grade 1 hero Runhappy has been retired from racing by Gallery Racing and will take up stud duties at Claiborne Farm in Kentucky for the 2017 breeding season. He will stand at a fee of $25,000.

The four-year-old son of Super Saver was bred by Wayne, Gary, and Bryan Lyster out of the winning Broken Vow mare Bella Jolie. He was purchased by his owner James McIngvale for $200,000 at the Keeneland September Yearling Sale in 2013.

Under the care of both Laura Wohlers and Maria Borrell, Runhappy went on to win seven times during his career including notching six victories in a row from July to December of his three-year-old season.

Runhappy has run twice this season, finishing fourth in a Grade 3 event in October and down the field behind Tamarkuz in this month's Breeders' Cup Dirt Mile.

McIngvale said: "On one hand, we wish he could run forever. This is by far the most incredible horse we've ever owned and he's brought so much joy to our family and his fans. But on the other hand, we've always pledged to do what's best for the health and happiness of Runhappy.

"For that reason, we put our strong emotional attachments aside and decided to retire him from racing. Now we're filled with gratitude and enthusiasm watching Runhappy move into the same stall occupied by Secretariat, Unbridled, Easy Goer, and Bold Ruler to begin his stud career at the world-renowned Claiborne Farm."

Claiborne Farm representative Bernie Sams added: "We are thrilled and honoured to welcome Runhappy to Claiborne. He came out of his last race healthy and sound, but everyone felt the timing was right. He is one of the most impressive racehorses I have ever seen and when you start to dig into his pedigree, it's no surprise why he was so successful.

"We obviously have a great deal of confidence that he'll pass his tremendous speed onto his progeny."

FIRST PUBLISHED 3:30PM, NOV 13 2016
We are thrilled and honoured to welcome Runhappy to Claiborne