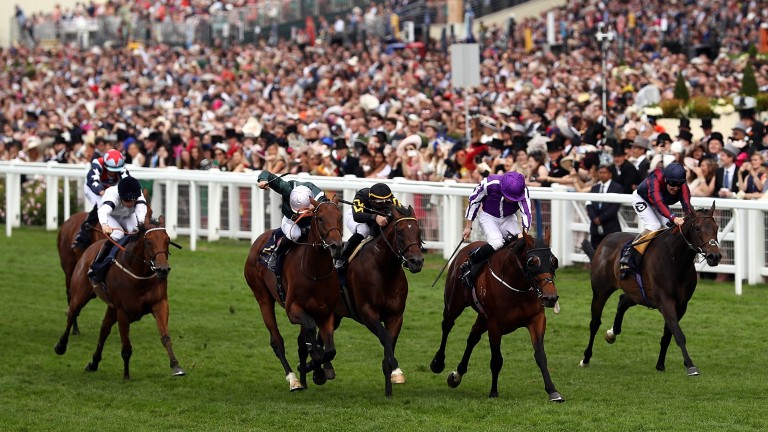 Merchant Navy confirmed himself one of the world's most exciting stallion prospects and opened up the possibility of shuttling to the northern hemisphere with a thrilling Diamond Jubilee Stakes success on Saturday.

The son of Fastnet Rock, already a Group 1 winner in his native Australia and at a significant weight disadvantage based on his form with Redkirk Warrior at Flemington, joined Aidan O'Brien's Ballydoyle stable earlier this year in a bid to advertise his talents to a global audience and could hardly have done so in more dramatic fashion.

In what could be the final start of his career, Merchant Navy landed the spoils with a desperate lunge of his neck that transforms his profile as a stallion.

Coolmore's Australian arm secured Merchant Navy's breeding rights in a deal reported to be worth A$30 million late last year and he is due to join their stallion roster in New South Wales for the forthcoming southern hemisphere season at a fee of A$55,000.

Saturday's win means he is now highly likely to join his father in reverse shuttling to Coolmore's Irish base as early as next year.

Aidan O'Brien has previous in converting an Australian-bred star into a dual-hemisphere prospect, having won the then Golden Jubilee Stakes with Choisir's son Starspangledbanner in 2010.

One of 35 Group 1 winners for Fastnet Rock, and his seventh in Europe, Merchant Navy was sourced by his former trainer Ciaron Maher from the Segenhoe Stud draft of the 2016 Inglis Australian Easter Yearling Sale in Sydney for what now looks the modest sum of A$350,000.

Bred by Queensland's Chris Barhan and foaled in November of 2014, the colt is out of the Group 1 placegetter Legally Bay and is a brother to the Group 2 winner Jolie Bay and the stakes-placed Zara Bay.

Legally Bay is a daughter of Snippets, a hugely popular and talented former Arrowfield Stud sire, who provided 54 stakes winners of his own before his death in 2002, and whose daughters have combined with Fastnet Rock to produce a further two Group 1 winners in Avantage and Wanted.

The distaff side of Merchant Navy's pedigree is loaded with speed and he is likely to attract the attention of plenty of breeders hoping to produce top quality sprinters should he indeed head to Ireland.

In that event, Merchant Navy will be one of three winners of the increasingly influential Coolmore Stud Stakes at Flemington standing in Britain and Ireland, alongside Darley's Brazen Beau and Tweenhills Stud newcomer Zoustar. The 2011 winner Sepoy had also shuttled to Darley until this year.

FIRST PUBLISHED 5:39PM, JUN 23 2018
Saturday's win means he is now highly likely to join his father in reverse shuttling to Coolmore's Irish base

Mickaelle Michel taking inspiration from Hollie Doyle ahead of Shergar Cup New option for Palace Pier as Qipco British Champions Day entries are revealed Charlie Appleby outlines plans for top three-year-olds Adayar and Hurricane Lane The King George was great but this Saturday at Ascot is far more important King George analysis: 'Adayar might not be the best colt in his stable' Forgive the gushing enthusiasm but I feel like I have seen something special