Royal Ascot ALL IN THE FAMILY 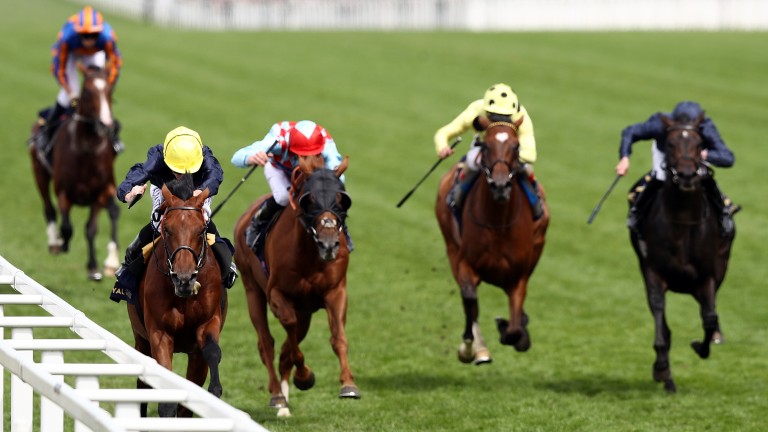 Crystal Ocean emulated his half-brother Hillstar on Saturday by becoming the second Royal Ascot winner for his tremendous late dam Crystal Star and looks firmly on course to become the very best of her talented offspring.

Hillstar, by Danehill Dancer, won the King Edward VII Stakes in 2013 before finishing second and fifth respectively in the following two renewals of the Hardwicke Stakes.

It was the opposite way round for Crystal Ocean though, who placed in last year's King Edward VII before running out a straightforward winner of Saturday's Hardwicke Stakes for Sir Michael Stoute.

Narrowly defeated in last year's St Leger, Crystal Ocean has made a fine start to his four-year-old campaign, with Saturday's Group 2 his biggest win to date and given his trainer's record with this type of horse, it would take a brave punter to bet against him eventually getting a Group 1 win or two.

By Sea The Stars, Crystal Ocean is one of seven foals to race out of Crystal Star, who died in 2015, with Britain's champion older female in 2009 Crystal Capella (by Cape Cross) and Listed scorer Crystal Zvezda (Dubawi) her other stakes scorers.

This is a family with plenty of Ascot success scattered throughout it, with Crystal Star being a daughter of Mark Of Esteem, a Group 1 winner at the Berkshire track back in 1996. He has gone on to sire the dams of King Edward VII winners Across The Stars and Permian.

Group and Grade 1 winners elsewhere in the family include the Poule d’Essai des Pouliches heroine Rose Gypsy and the Prix d’Ispahan winner Sasuru.

The 'Crystal' element of so many of the family's names extends back to Anthony Oppenheimer's Crystal Cavern, Crystal Ocean's second dam who was acquired by the De Rothschild family, the owner and breeder of Crystal Ocean.

Slew of stakes scorers for ever popular Sea The Stars

FIRST PUBLISHED 3:58PM, JUN 23 2018
I would take a brave punter to bet against him eventually getting a Group 1 win or two

Mickaelle Michel taking inspiration from Hollie Doyle ahead of Shergar Cup New option for Palace Pier as Qipco British Champions Day entries are revealed Charlie Appleby outlines plans for top three-year-olds Adayar and Hurricane Lane The King George was great but this Saturday at Ascot is far more important King George analysis: 'Adayar might not be the best colt in his stable' Forgive the gushing enthusiasm but I feel like I have seen something special